This CIA map of Cuba, with its stars, circles, anchors, squares and triangles, reveals how urgently the U.S. intelligence community was tracking the extensive Soviet military buildup in Cuba and how much of it CIA analysts had identified. For example, listed here with fairly precise locations are the coastal cruise missiles, the Soviet troop encampments, the anti-aircraft SAM missile sites, and some mysteries, such as the top item on the list: “unidentified – missiles.” 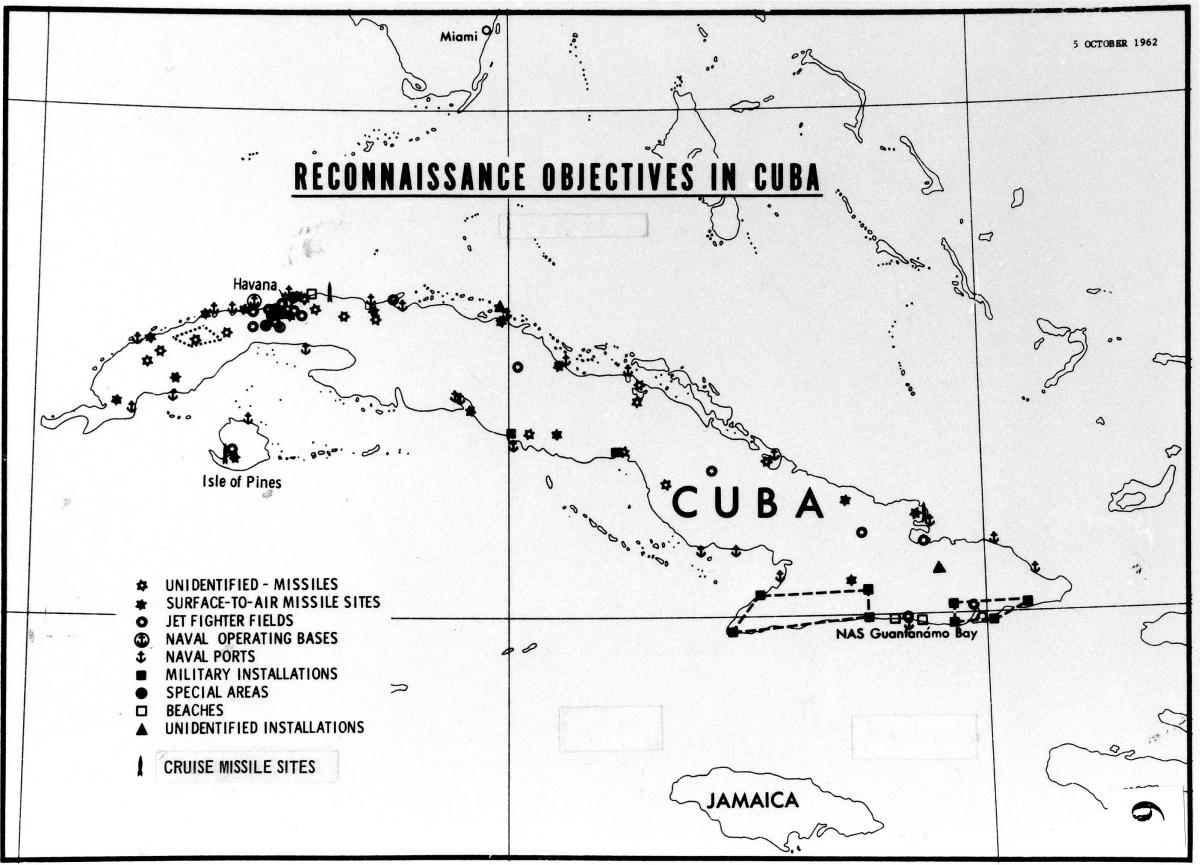 Oct. 5 map shows areas of Soviet deployments in 1962 and trapezoid for U-2 overflight

Thousands of false reports from refugees and agents about missiles in Cuba had already flooded CIA analysts, including 211 false reports even before January 1, 1962. As one retrospective review remarked, “CIA analysts had naturally come to view all such reports with a high degree of suspicion.” But two accurate reports came to CIA in September, the first from September 12 (disseminated on September 21 by CIA) about a convoy in Havana with large trucks and long canvas-covered objects the size of medium range ballistic missiles. The second, from September 17 (disseminated on September 27), placed such a convoy moving towards San Cristobal.

In quite a technical intelligence achievement, CIA analysts separated these accurate reports from the mass of false ones and created a “target card” for a high priority U-2 overflight to see what actually was on the ground. That target is the small trapezoid that appears on the western end of Cuba on this map from October 5, 1962. After weather delays and some resistance within the U.S. government because of the chance of an embarrassing shoot-down, a U-2 piloted by Richard Heyser would photograph the trapezoid on October 14, and on October 15 photo-interpreters would spot Soviet medium-range missiles on the film – starting the famous “13 days” of highest-level tensions.

At the same time, CIA analysts never figured out the full scope of the Soviet deployments, despite all the circles and stars on this reconnaissance map and thousands of frames of spy plane footage to come. Even as late as November 1962, U.S. intelligence estimated only 16,000 Soviet troops were in Cuba, when the actual number was over 40,000.