Deputy Secretary of Defense Roswell Gilpatric summarizes the options facing the U.S. in these two handwritten pages from October 18, 1962. Gilpatric’s notes list both political options, with certain advantages and disadvantages, and military options like air strikes and the blockade. But the bottom-line question is whether “to initiate use of force to settle issues between US & USSR.” Gilpatric inserts the word “major” above “use of force.” 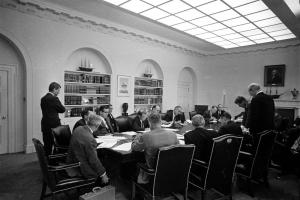 Kennedy and McNamara highlighted the dangers of military escalation at the ExComm on October 18, attended by Gilpatric. According to the authoritative account of the White House tapes by Sheldon Stern (pp. 99-100), JFK said, “I would think you’d have to go on the assumption that they’re not gonna permit nuclear weapons to be used against the United States from Cuba unless they’re gonna be using them from everyplace.”

McNamara replied ominously, “I’m not sure they can stop it …. I don’t believe the Soviets would authorize their use against the U.S., but they might nonetheless be used,” either by accident, a rogue launch, or just the ability of the local commander to launch while under attack. 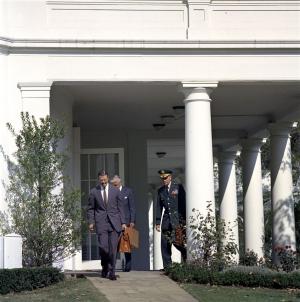 Most remarkably, it’s on October 18 that John F. Kennedy the dove really emerges. Not only is this when he first mentions the Adlai Stevenson idea of trading the Jupiter missiles in Turkey, but he also lectures the ExComm on how the allies would perceive an all-out invasion of Cuba. Most regarded Cuba “as a fixation of the United States and not a serious military threat …. An awful lot of conditioning would have to go in before they would accept and support our action against Cuba because they think that we’re … slightly demen… demented on this subject. … A lot of people would regard this as a mad act by the United States which is due to a loss of nerve because they will argue that taken at its worst the presence of these missiles doesn’t change” the nuclear balance of power.