This document, only declassified decades after the Cuban Missile Crisis, illuminates one source of the rising sense of threat in Havana and in Moscow in the spring of 1962 that led to the Anadyr deployment of missiles to Cuba. Even after the debacle of the failed CIA-sponsored invasion of Cuba at the Bay of Pigs in April 1961, the U.S. maintained an extensive covert operation, called “Operation MONGOOSE,” aimed at the overthrow of Castro – even to the extent of enlisting the Mafia in assassination plots and launching sabotage operations in those dangerous days of October 1962. 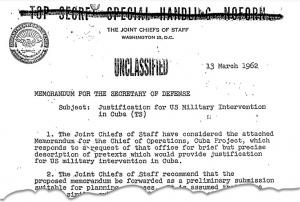 This document, which bears the code word “Northwoods,” proposes pretexts that the U.S. could manufacture to justify the invasion of Cuba, such as the shootdown of a civilian airliner or the bombing of a U.S. ship in Guantanamo Bay.

Cubans call the missile crisis the “October Crisis” because U.S. covert operations produced practically a monthly crisis for the Castro regime. Afterwards, however, the most senior American accounts (by Robert Kennedy, Robert McNamara, McGeorge Bundy, and others) treated the crisis as a bilateral U.S.-Soviet affair with Cuba more or less just a parking lot for Soviet missiles. It took decades and declassified documents like this one to put Cuba back in the Cuban Missile Crisis and to restore the defense of Cuba as the leading Soviet (and Cuban) motivation for the missile deployment.

The National Security Archive won declassification of some Operation Mongoose documents through a Freedom of Information Act lawsuit in 1988 and included them in the briefing book for a January 1989 conference in Moscow with McNamara, Bundy, and key Soviets like Andrei Gromyko and Anatoly Dobrynin (and a Cuban delegation, much to the Americans’ surprise).

McNamara had to admit that “with hindsight, if I had been a Cuban leader … I might have expected a U.S. invasion… [even though] we had absolutely no intention of invading Cuba … therefore, the Soviet action to install missiles … was, I think, based on a misconception – a clearly understandable one, and one that we, in part, were responsible for. I accept that.” This leap of empathy led to the invitation from the Cubans to come to Havana in January 1992.

Of all the Mongoose documents, this one from the Joint Chiefs with the code word “Northwoods” ranks as the most shocking, proposing pretexts like a fake shoot down of a civilian airliner that would justify a U.S. invasion of Cuba. Addressed to McNamara himself from the Joint Chiefs of Staff in March 1962, this document was not available in 1989, and only reached the public through the Kennedy Assassination Records Review Board that opened millions of pages in the 1990s, including on Cuban operations. Author James Bamford obtained a copy and shared it with the Archive, which published the document online in 2001. 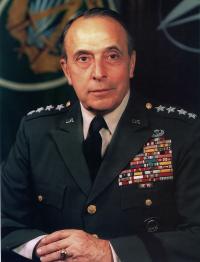 Here, the head of the covert Cuba project, Brig. Gen. Edward Lansdale, asks the Joint Chiefs for pretexts that would justify a U.S. invasion of Cuba; and Gen. Lyman Lemnitzer eagerly responds that the Chiefs should be in charge, not the CIA, with one caveat: “only as long as there can be reasonable certainty that US military intervention in Cuba would not directly involve the Soviet Union.” The pretexts would place the U.S. in the “apparent position of suffering defensible grievances from a rash and irresponsible government of Cuba” and would include a “Remember the Maine” incident, the “real or simulated” sinking of a boatload of Cuban refugees on the way to Florida, and more. The memo warns that if no internal Cuban revolt came about in 1962 the U.S. would have to develop such provocations to justify military action. (p. 12)