Kennedy regretted September political warning against ballistic missiles; “I should have said, …well, we don’t care.”

U-2 photographs in August 1962 of Soviet SA-2 (SAM) anti-aircraft sites in Cuba convinced CIA director John McCone that the Soviets were trying to hide something else, most likely some kind of ballistic missile deployment to Cuba. Few in the U.S. intelligence community or the White House agreed with him, not least because this was a political issue (and McCone was a Republican). Republicans in Congress blasted Kennedy for allowing Cuba to remain Communist (for which JFK had attacked Eisenhower and Nixon in the 1960 campaign), hyped every story of Soviet aid to Cuba (there was plenty to hype in the summer of 1962), and asserted nuclear missiles were there already.

This U-2 photograph of a SAM site in Cuba on August 29 fed the flames, even though it was above Top Secret, codeword PSALM, a special compartment Kennedy had ordered to keep Soviet-Cuba deployment intelligence tightly controlled. But on August 31, 1962, a Republican senator from New York, Kenneth Keating, publicly accused the Kennedy administration of allowing a Soviet buildup in Cuba that included nuclear missiles.

Sen. Keating was ahead of the curve, since the first medium-range Soviet missiles had not yet reached Cuba. But political realities forced the Kennedy administration into a formal response—one that JFK later regretted. At that moment on August 31, the photography only showed surface-to-air missile sites in Cuba; and Soviet ambassador Anatoly Dobrynin (who was never informed about Anadyr) assured the President’s brother Bobby that nothing offensive was going to Cuba. So, on September 4, 1962, the White House issued a statement warning that the introduction of “offensive ground-to-ground missiles” in Cuba would raise “the gravest issues.” 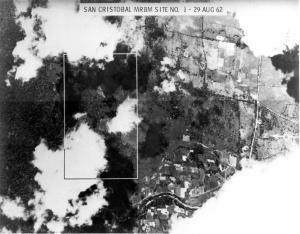 U-2 spy plane coverage of Cuba on August 29, 1962, showed anti-aircraft (SAM) sites under construction but nothing at the site that would become the first medium-range ballistic missile location spotted in Cuba, at San Cristobal.

When Kennedy saw on October 16 the U-2 photographs of Soviet MRBMs installed at San Cristobal in Cuba, one of his reactions (captured on the White House tapes) actually conceded that his own rhetoric had helped create a situation in which he must act: “Last month” (he said in a jocular tone, according to Sheldon Stern’s account in Averting The ‘Final Failure’, p. 82) “I said we weren’t going to [accept offensive missiles in Cuba] and last month I should have said we’re… well, we don’t care.” After all, the Soviets were living with U.S. medium-range ballistic missiles in Turkey, right across the Black Sea from Khrushchev’s dacha.

“But when we said we’re not going to, and then they go ahead and do it, and then we do nothing” (Stern hears JFK becoming very somber) “then… I would think that our… risks increase.” Passively accepting the missiles at any point would likely have been untenable politically. JFK says gloomily, “They’ve got enough to blow us up now anyway. After all, this is a political struggle as much as military.”

Senator Keating would keep the struggle going long after the missiles left Cuba, alleging that some remained hidden in caves. Overstated yet prophetic beforehand, accurate during, and wrong afterwards, Keating’s sources on the Cuban Missile Crisis remain something of a mystery, partially unraveled by the historian Max Holland, who traces them to radical Cuban students refracted through two hard-core anti-Soviet former ambassadors, Claire Boothe Luce and William Pawley.

Decades later, Nikita Khrushchev’s son Sergei, himself a rocket scientist, mused aloud that the U.S. should just have let the rockets sit there in tropical Cuba; the steel would have rusted, the propellant dissipated; the warheads would have eaten all the food service ice Cuba could produce; and within months, certainly a year, the rockets wouldn’t fire. Why, Sergei wondered, did Kennedy precipitate the crisis? The answer, a caution to all modelers and theorists, was domestic politics.