The Soviet Withdrawal from Afghanistan 1989

By Svetlana Savranskaya and Tom Blanton

The End of Soviet Intervention, but Not Demilitarization or Free Elections

Soviets Sought a Model of Cooperation with U.S. on Regional Conflicts

Soviet Invasion of Afghanistan a Case of Mission Creep, According to New Book and Original Soviet Documents
October 13, 2012

Briefing Book on the Soviet Intervention in Afghanistan

Transcript of the 1995 Norwegian Nobel Institute conference on Afghanistan

Washington D.C., February 27, 2019 – The Soviet Union withdrew its military forces from Afghanistan 30 years ago this month without achieving demilitarization there or the national reconciliation, including free elections, that they sought during negotiations with the U.S., according to the declassified documents published today by the National Security Archive.

The documents show that the U.S. position changed from “the mutual withdrawal of all outside forces” (as President Reagan told Mikhail Gorbachev at Geneva in November 1985), to insisting on continued arms support to the Afghan Mujahedin in 1988 (as National Security Advisor Colin Powell told Secretary of State George Shultz when the latter seemed to embrace “mutual restraint”), to the refusal of free election plans in 1990 if they allowed the Soviet-supported Kabul incumbent, Najibullah, to run. The core U.S. goal had been to bring about a Soviet military withdrawal, and once that was clearly underway in 1988 other factors came to the fore, such as U.S. relations with Pakistan, Congress’s commitment to the Afghan resistance, and U.S. insistence that Najibullah had to go.

The Soviet decision to withdraw from its disastrous military invasion of Afghanistan occurred as early as October 1985, according to the documents; but Gorbachev did not set a specific timetable until February 1988 while he sought to create a model of cooperation with the United States for resolving regional conflicts. While the Soviets shared the U.S. goal of an independent Afghanistan, they were especially wary of the power of radical fundamentalists, who dominated in the Pakistan-based resistance, supported by the United States. The Soviet leadership believed that the process of national reconciliation would culminate in free elections under U.N. monitoring and the resulting government would be secular and moderate. However, the documents show that eventually the Soviets accepted the fact that the Reagan administration would continue to arm the more radical factions of the Mujahedin through Pakistan, even in violation of the Geneva agreements. Gorbachev was hoping that progress toward a political settlement could be made by working together with the United States after the signing of the Geneva agreements, thus creating a precedent and further cementing U.S.-Soviet global cooperation.

In the end, both in the 1988 Geneva Accords and negotiations with the Bush administration in 1989 and 1990, the sides agreed to disagree, papering over the gaps in their positions, much to the disappointment of Gorbachev and Soviet Foreign Minister Eduard Shevardnadze. The latter finally erupted during talks with U.S. Secretary of State James Baker in 1990, saying the U.S.-sponsored Mujahedin were not interested in free elections, just power; and Baker did not disagree. As Ambassador Anatoly Dobrynin summed up in his memoirs, “Gorbachev’s strategic aim and hope was that Afghanistan would be neutral and that the United States would play a useful role together with us in the future settlement. That turned out to be an illusion.”[1]

The documents published today include recent declassifications from the U.S. Department of State, key documents from the Reagan and Bush presidential libraries, declassified accounts of the Indian and Pakistani roles in the Afghan negotiations, Gorbachev Foundation notes of key meetings, and excerpts from Reagan-Gorbachev summit transcripts and other highest level diplomatic conversations previously published by the Archive in Masterpieces of History (2010) and The Last Superpower Summits (2016). 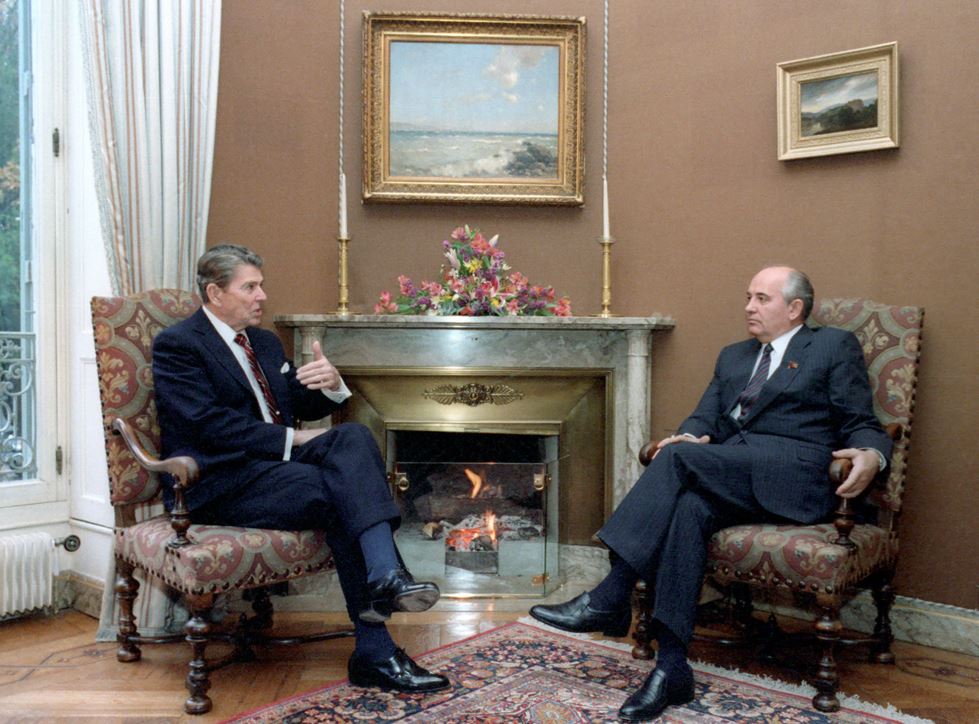 Reagan and Gorbachev extended their first face-to-face session inside Fleur d'Eau at Geneva from a scheduled 15 minutes to a full hour- both men had a lot to say- while aides paced outside, Nov.19, 1985. These "one on one" sessions actually included translators and notetakers. (Credit: Ronald Reagan Presidential Library, C31983-14A) 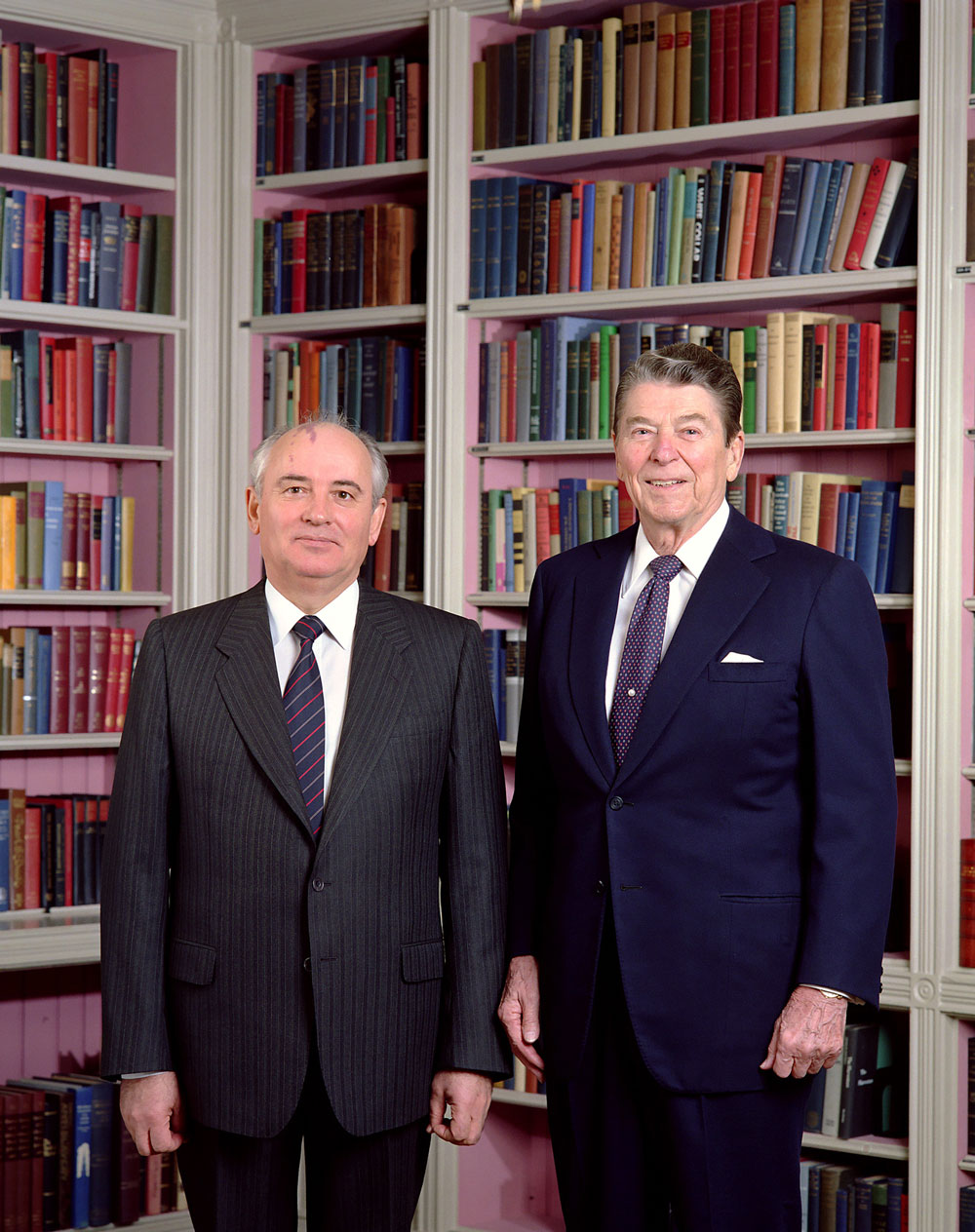 This unusual formal portrait of Gorbachev and Reagan showed the two leaders inside the White House Library at the beginning of the Washington summit, Dec. 8, 1987. (Credit: Ronald Reagan Presidential Library, C44007 -9) 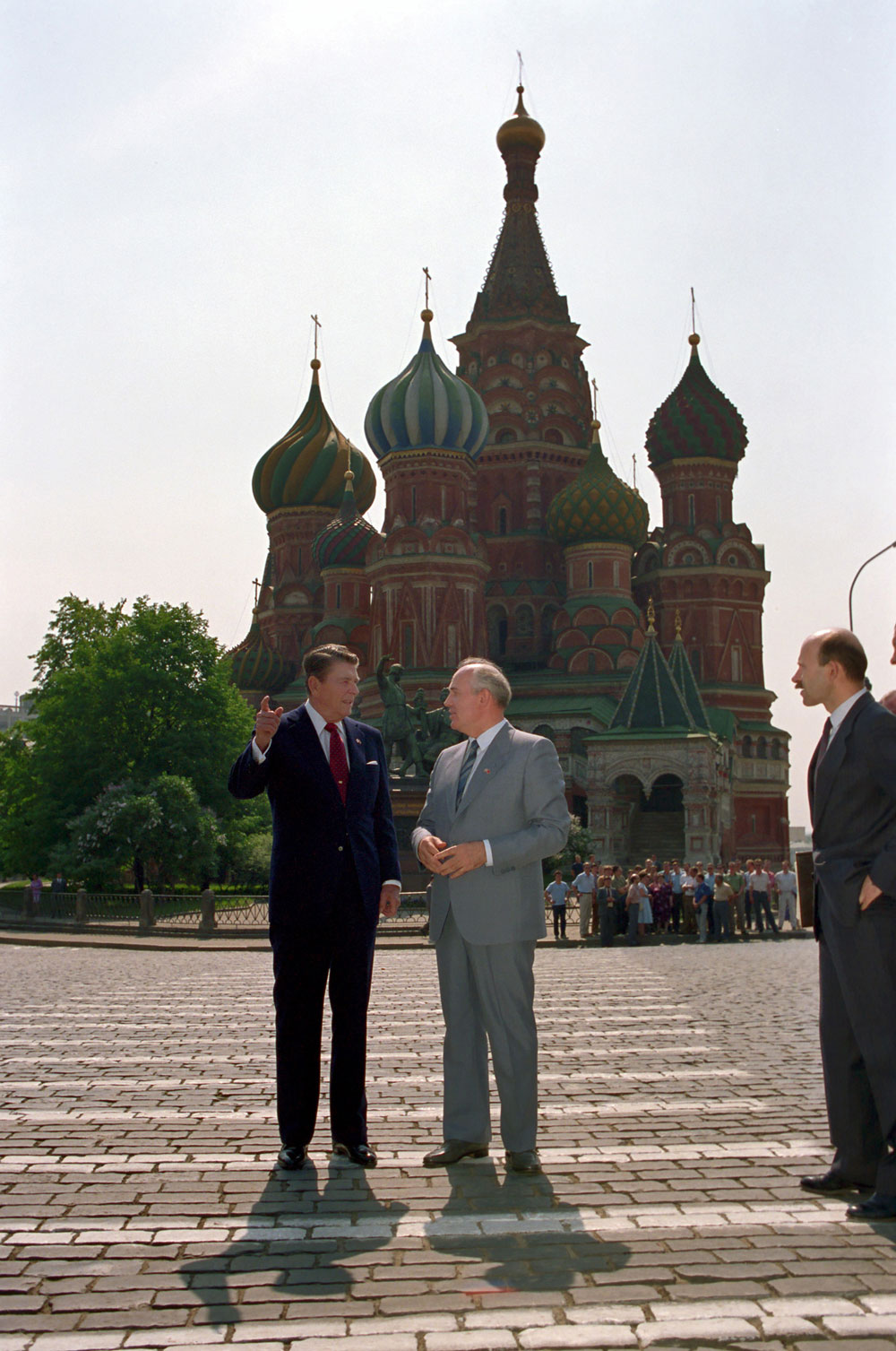 This iconic photo placed Reagan and Gorbachev in the heart of Red Square, in front of St. Basil's Cathedral, with interpreter Pavel Palazhchenko leaning in to translate. Just out of the picture to the right is U.S. Navy lieutenant commander Woody Lee carrying the "football" briefcase with U.S. nuclear launch codes for war plans, in which Red Square was ground zero. June 1, 1988 (Credit: Ronald Reagan Presidential Library, C4 7345-1 0) 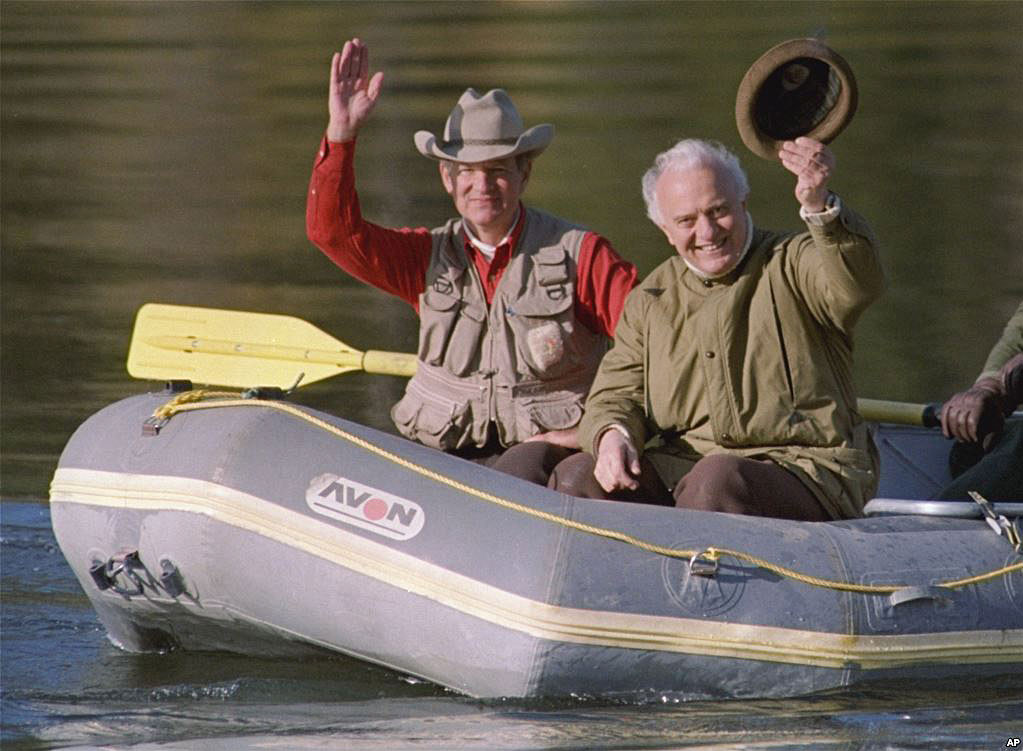 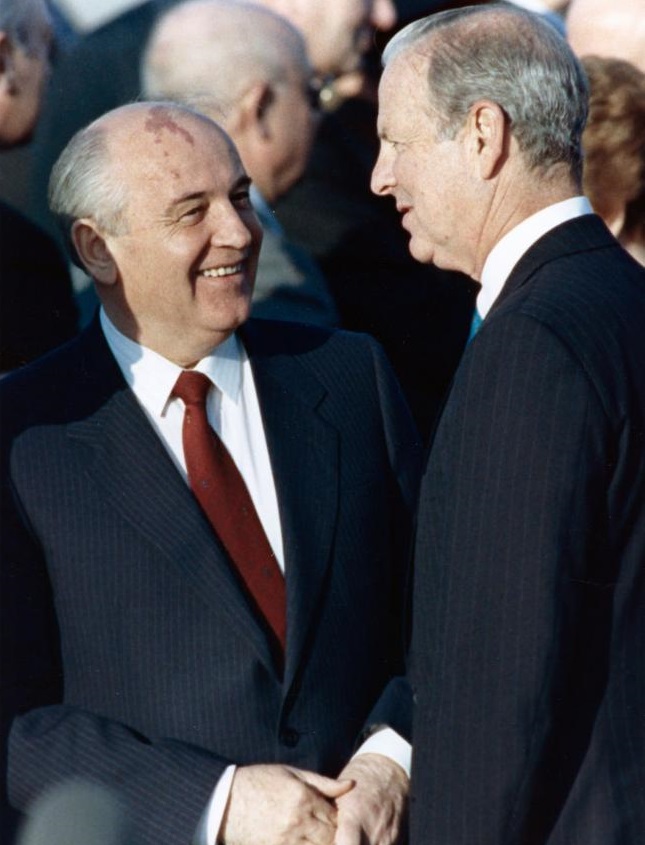 Baker with Gorby in Moscow, February 1990. 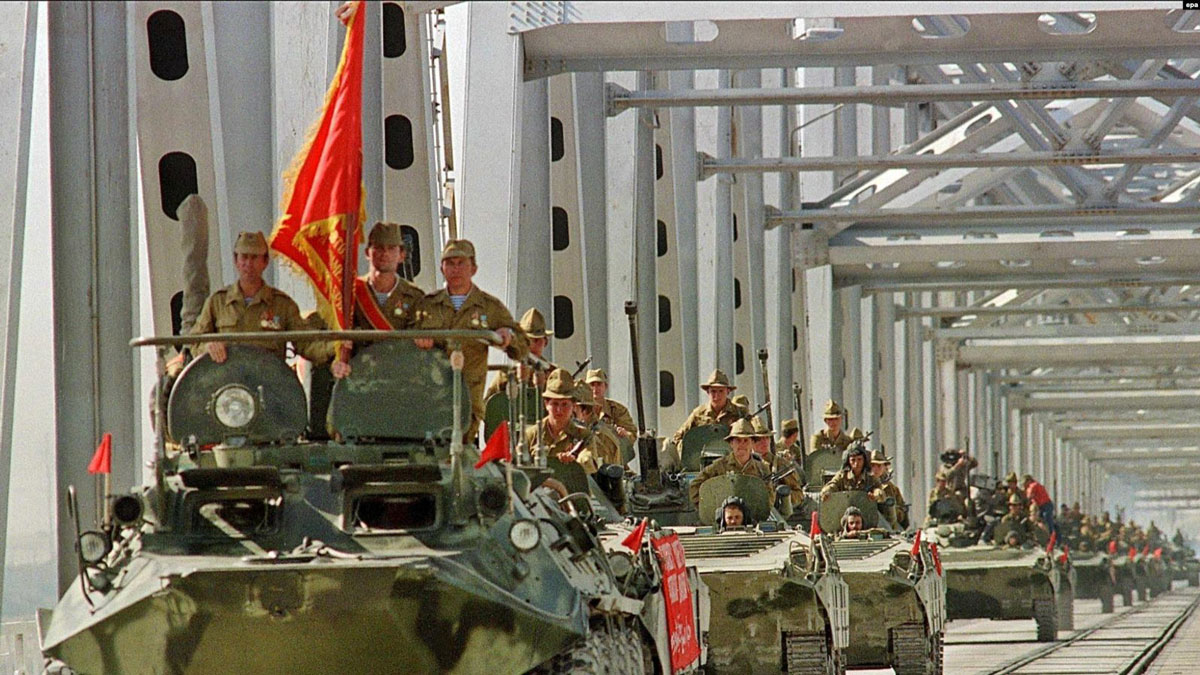 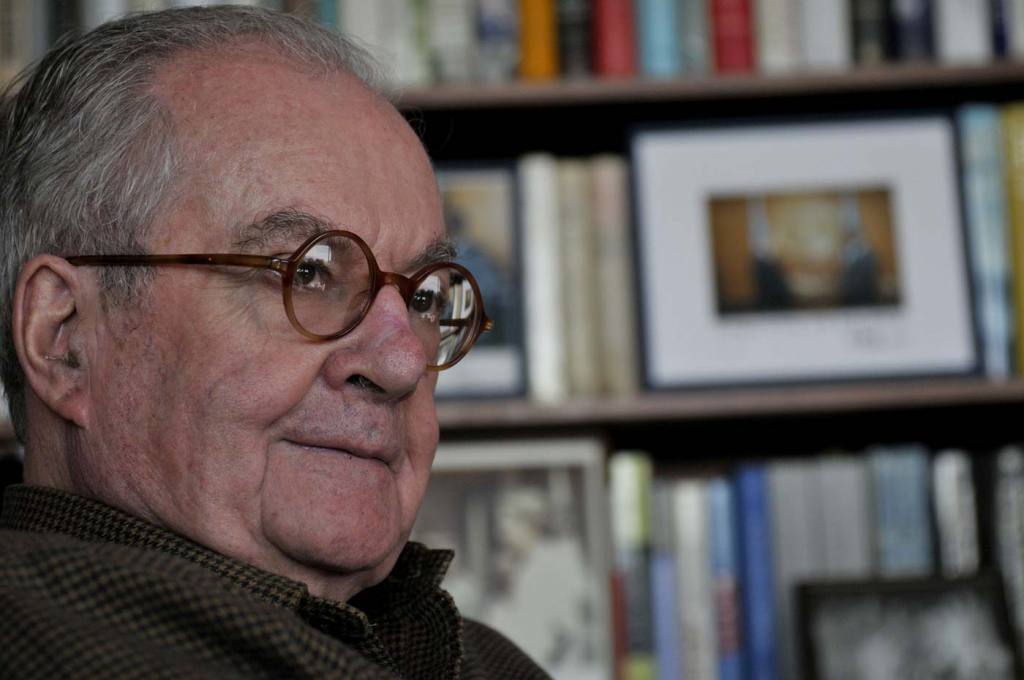