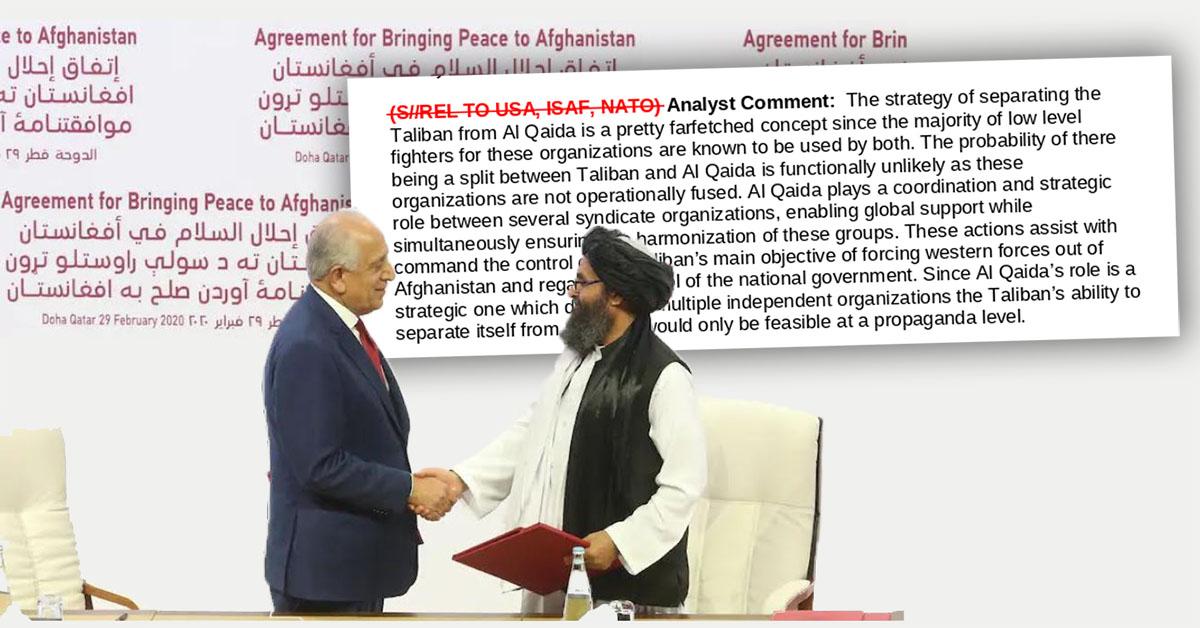 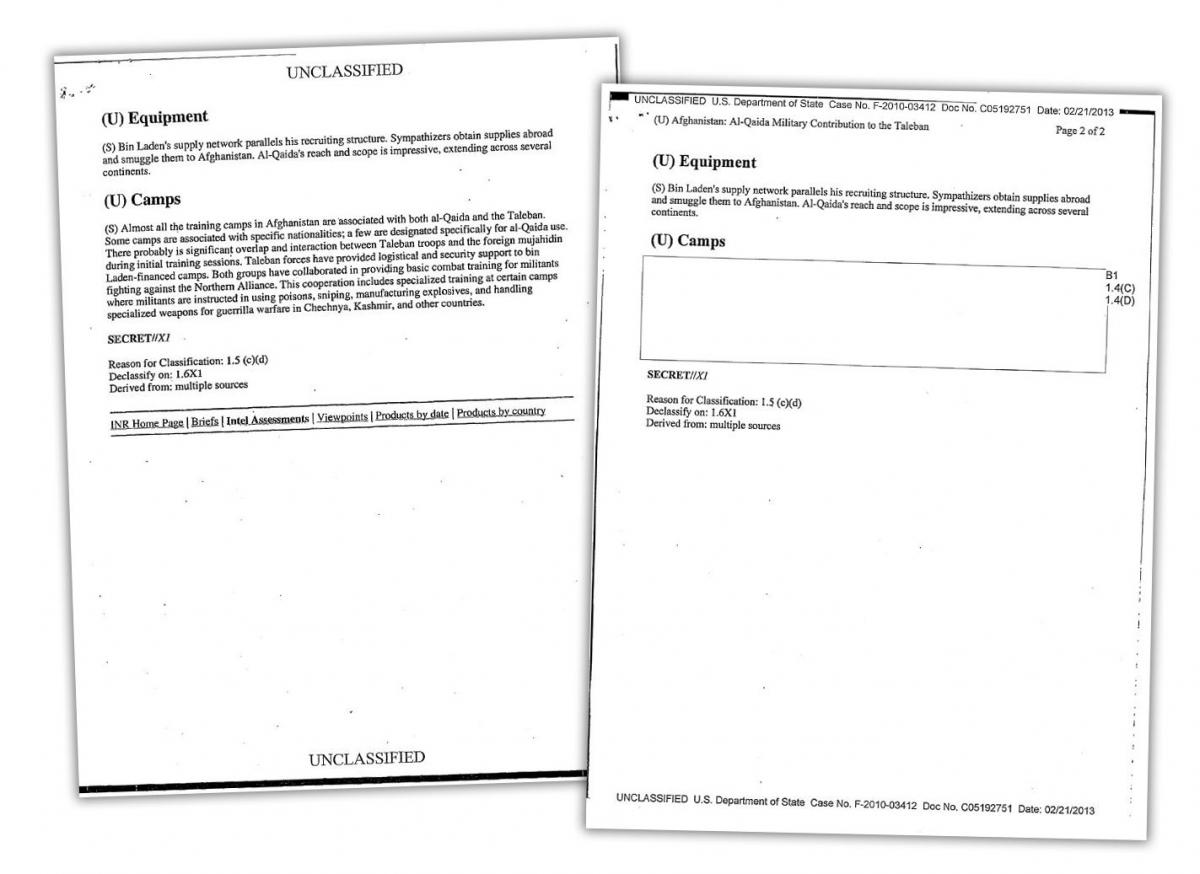 Two reviews of the same 2001 INR report (Documents 5a and 5b) show reviewers initially believed the information on shared al Qaeda-Taliban training camps would damage national security if released.

Washington, D.C., September 23, 2021 - The Taliban will not – and perhaps cannot – contain al Qaeda, despite hopeful United States government assurances that the Taliban will be an effective counterterrorism partner. This sobering analysis is made by National Security Archive fellow and Bowdoin professor Barbara Elias in a recent Foreign Policy article, and is backed up by two-never-before-seen documents obtained by the Archive through the Freedom of Information Act (FOIA). The documents, which underscore the critical bureaucratic, military, and financial support al Qaeda offers the Taliban, will be included in the upcoming Digital National Security Archive set, The Afghanistan War and the United States, 1998-2018, which will be published next year.

A previously classified December 18, 2008, RC East OSINT summary intelligence analysis, which is featured in Foreign Policy and was initially published in the Archive’s “Haqqani History” posting, succinctly addresses the heart of the ongoing issue. It states, "The strategy of separating the Taliban from Al Qaeda is a pretty farfetched concept since the majority of low-level fighters for these organizations are known to be used by both … Al Qaida plays a coordinating and strategic role between several syndicate organizations, enabling global support while simultaneously ensuring the harmonization of these groups. These actions assist with … the Taliban's main objective of forcing western forces out of Afghanistan and regaining control of the national government."

This assessment is bolstered by the newly-published documents. In a Secret May 29, 1999, cable, Secretary of State Madeleine Albright directs the ambassadors in Abu Dhabi, Riyadh, and Islamabad to meet with host government officials to argue that there is “clear and compelling information that Usama bin Laden is currently planning a terrorist attack against US targets or interests in the Arabian peninsula, Africa, South Asia, and/or Southeast Asia.” The ambassadors are directed to reiterate that despite assurances to the contrary from the Taliban, al Qaeda operates with impunity in Afghanistan, and that if the US is attacked, the Taliban will be held directly responsible. The ambassadors are further directed to request that the host governments urge the Taliban to extradite UBL to a third country for extradition to the United States.

The document shows, however, that complex local and regional politics helped provide cover for the Taliban - al Qaeda relationship in the face of growing US pressure. In the cable, Albright strongly encourages the UAE to withdraw all landing rights for Afghan air carrier Ariana Airlines, and to prohibit its operation in the UAE until UBL is extradited; the US believes the Ariana threat is the “most straight-forward and effective” move to make against bin Laden and the Taliban.

The request was not well-received.

A Secret June 1, 1999, cable from the American Embassy in Abu Dhabi to State headquarters – also obtained by the Archive through FOIA and published here for the first time – focuses solely on the request that Dubai close Ariana Airlines. On May 29, Ambassador Theodore H. Kattouf requested Crown Prince Shaykh Muhammad bin Rashid al Maktoum (MBR) to halt all Ariana flights from Dubai. Ambassador Kattouf states that the US “had information that UBL was using Ariana to transport men and material from Afghanistan via Dubai to various destinations.” MBR demurred, stating that he would discuss the matter with his advisors, but that because Ariana only operated one weekly passenger flight from Dubai to Afghanistan, it would likely be ineffective. A later, highly-redacted Secret August 4, 1999, memo, also from the American Embassy in Abu Dhabi to State headquarters, reiterates that the UAE remained “noncommittal on Ariana Airlines request.”

Elias argues that shifting regional dynamics were compounded by al Qaeda’s ability to help the Taliban run “impressively organized training camps ... Staffing and standardizing curricula was an organizational feat al Qaeda managed superbly.” This is illuminated in a Secret two-page October 1, 2001, State Department Bureau of Intelligence and Research report on al Qaeda’s military contribution to the Taliban, which highlights the Taliban’s increasing reliance on bin Laden and al Qaeda for financial and military support against the Northern Alliance. The document pays special attention to the “so-called 55th, or 055, Brigade” comprised primarily of “expatriate mujahiddin forces loyal to Bin Laden. Members of the brigade generally are employed in small groups where they are most useful on the battlefield rather than as a single large unit. The strength of the 55th probably ranges between 500 and 2,500. Al-Qaida probably rotates personnel through this brigade to combat experience prior to their dispatch abroad.”

An earlier release of the same document entirely obscures the section on training camps jointly run by al Qaeda and the Taliban, ostensibly because its release would cause identifiable harm to intelligence activities (including covert action); intelligence sources or methods, and foreign relations or activities of the United States, including confidential sources. Elias offers a possible explanation for these redactions; “Thanks to language and logistical skills that the Taliban lacked, al Qaeda solved several bureaucratic problems for the Taliban, including ensuring that foreign fighters were vetted (many turned out to be spies).”

Taken together, the documents support Elias’s arguments that “While there are risks to the Taliban’s partnership with al Qaeda,” they are risks the Taliban are willing to take.

Freedom of Information Act Request to the CENTOM

The Haqqani History: Bin Ladin's Advocate Inside the Taliban
Sep 11, 2012