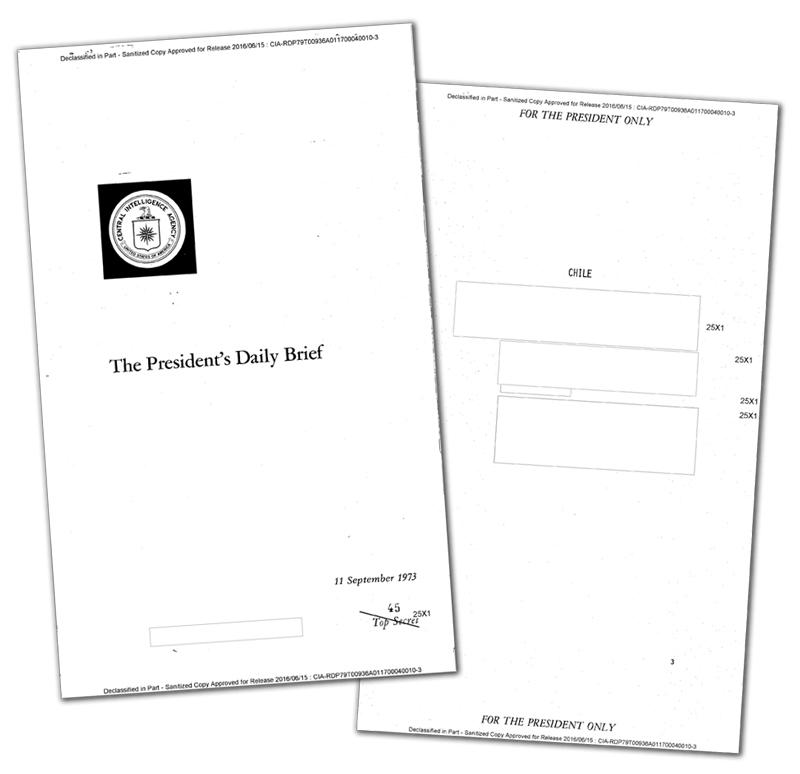 The President’s Daily Brief for September 11, 1973, recently released by the CIA, excises the entire entry on the coup in Chile (see Document 01). 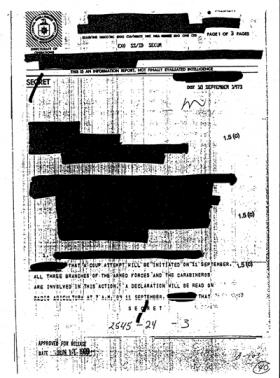 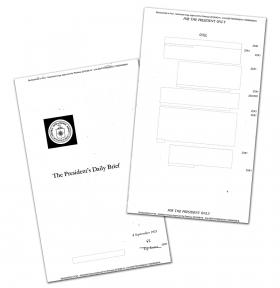 A full-page briefing to the president about Chile on September 8, 1973, remains entirely censored.

Washington D.C., September 9, 2016 – Forty-three years after the U.S.-supported military coup in Chile, the Central Intelligence Agency continues to withhold information on what it knew about planning for the putsch, and what intelligence it shared with President Richard Nixon, according to redacted documents posted today by the National Security Archive. The documents, among the hundreds of President’s Daily Briefs (PDBs) the CIA declassified last month, excise material that almost certainly has already been released to the public years ago. The section on Chile of the PDB dated September 11, 1973, for example, was completely censored, as was an entire page on Chile provided to Nixon on September 8, 1973, even though thousands of once-sensitive intelligence records from the coup period have already been declassified since at least 1999.

“The CIA is trying – but failing – to hold history hostage,” stated Peter Kornbluh, who directs the Archive’s Chile Documentation Project. By continuing to censor the historical record, he suggested, “the CIA is attempting to cover up what Nixon knew about coup plotting in Chile and when he knew it, as well as hiding the CIA’s own contacts and connections to the coup plotters.”

The National Security Archive today called on the Obama administration, which has prided itself on historical transparency, to revisit the CIA’s determination to withhold the records.  Kornbluh said the Archive would also use mandatory declassification procedures to press for the full release of the censored documents.

The CIA’s continuing censorship of history, Kornbluh noted, makes no sense because the agency has already officially acknowledged its ties to coup plotters within the Chilean military and already declassified substantial intelligence reporting on the countdown to the coup and CIA contacts with a key member of the military effort to overthrow Allende. In a special report on its operations in Chile to the House Intelligence Committee in September 2000, the CIA acknowledged that at the time of the coup it “was aware of coup-plotting by the military, had ongoing intelligence collection relationships with some plotters, and—because CIA did not discourage the takeover and had sought to instigate a coup in 1970—probably appeared to condone it.”

Indeed, according to Kornbluh’s book, The Pinochet File: A Declassified Dossier on Atrocity and Accountability, on the eve of the coup, one of the plotters identified by the CIA as a “key officer of Chilean military group planning to overthrow President Allende” confirmed to the CIA that the military would move against Allende the next morning and “asked if the U.S. government would come to the aid of the Chilean military if the situation became difficult.” According to a declassified secret CIA memorandum sent to the White House on the day of the coup, the official was promised that his request “would promptly be made known to Washington.”

According to declassified records posted today by the Archive, the intelligence community began generating substantial information about preparations for the coup on September 8, 1973. Initial reports stated that the coup was planned for September 10; the CIA subsequently reported in a special “critical information” cable that the coup would take place the next day, on September 11. Among the already declassified intelligence reports are:

**A Defense Intelligence Agency summary, dated September 8 and classified “Top Secret Umbra,” that provided detailed information on an agreement among the Chilean Army, Navy and Air Force to move against Allende on September 10.

**A CIA Intelligence cable, dated September 8 and classified “Secret,” stating that the Chilean Navy would “initiate a move to overthrow the government of President Salvador Allende in Valparaiso at 8:30am on 10 September,” and provided detailed information on which branches of the military and police would seize control of which strategic locations. The cable identified key Chilean officers and officials who had signed on to support the coup.

** A CIA intelligence cable, dated September 10 and classified “Secret,” which stated that the September 10th date had been postponed “in order to improve tactical coordination” but that “a coup attempt will be initiated on 11 September. All three branches of the Armed Forces and the Carabineros are involved in this action.”

The September 10 cable was written by Jack Devine, a young CIA operative in Santiago, based on intelligence provided to him by a source close to the military. In his memoir, Good Hunting: An American Spymaster’s Story, cleared by the CIA for publication in 2014, Devine wrote that "I sent CIA headquarters in Langley a special type of top-secret cable known as a CRITIC [critical information], which takes priority over all other cables and goes directly to the highest levels of government. President Richard Nixon and other top U.S. policymakers received it immediately. 'A coup attempt will be initiated on 11 September,' the cable read."

In 1999, the Clinton administration declassified Devine’s cable along with 23,000 other formerly secret records as part of a special declassification project on Chile; the National Security Archive has posted it for the first time today.

Under the Obama administration, in October 2015 the CIA began declassifying the President’s Daily Briefs, a set of intelligence records provided to presidents that former CIA Director George Tenet claimed could never be released publicly “no matter how old or historically significant it may be.” The CIA’s decision to process the records came eight years after the Ninth U.S. Circuit Court of Appeals, in response to a FOIA lawsuit brought by the Archive and Professor Larry Berman, refused to create a “per se status exemption for PDB’s,” leaving them subject to future Freedom of Information Act requests.

"The CIA deserves credit for finally acknowledging that the PDB’s can, in fact, be declassified without any harm to national security", Kornbluh noted.  “The documents provided to Richard Nixon on Chile,” he said, “can and should be released for the sanctity of the historical record. The public has a right to know what the President knew, and when he knew it.”

DIA, "Chile: The Military May Attempt a Coup Against The Allende Government on 10 September...," Top Secret UMBRA, Intelligence Summary, September 8, 1973

This highly classified intelligence report provides detailed information on an agreement among the Chilean Army, Navy and Air Force to move against Allende. Sources in Chile told U.S. military officials there that the target date for the coup was September 10.

In this report from the CIA station in Santiago, the CIA's sources among the coup plotters provide information that the Chilean Navy will lead a coup from Valparaiso in the early morning of September 10, and then the other branches of the military will join in. Sources tell the CIA that General Augusto Pinochet is in communication with Air Force General Gustavo Leigh about the planned coup effort.

This cable was written by a CIA operative in Santiago, Jack Devine, based on information from a source close to the Chilean military. Devine identifies the new date of the planned coup, September 11, and confirms that all three branches of the Chilean armed forces, along with the police, "are involved in this action." In his memoir, Good Hunting, Devine writes that the cable was labeled CRITIC [Critical Information] for urgency and distributed to top officials in Washington, including President Nixon.

The CIA transmits to the White House confirmation of the forthcoming coup from a "key officer" as well as his request for U.S. assistance if the military encounters resistance. The request arrives at the White House on the actual day of the coup. No direct U.S. support proved to be necessary; the request was never acted upon. 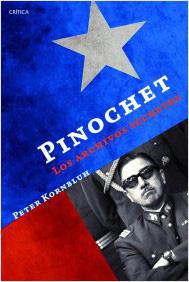