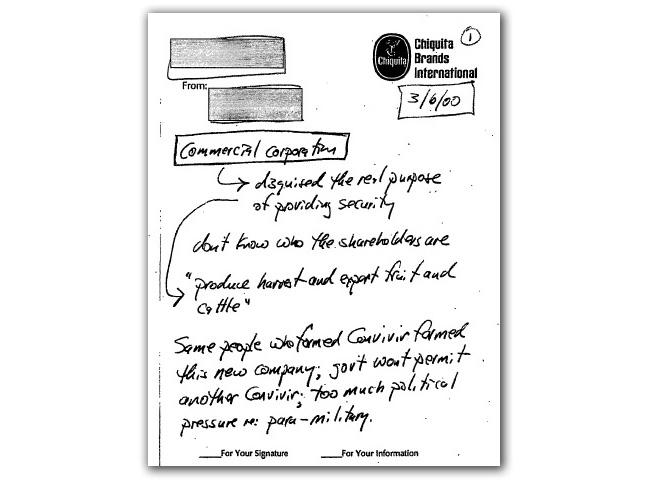 This is the fourth and final article in a series published by the National Security Archive in collaboration with VerdadAbierta.com 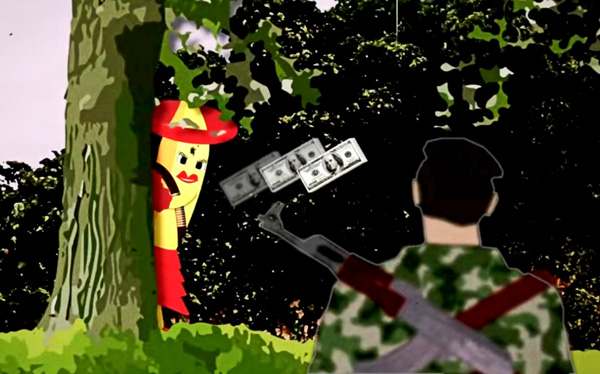 The petition to the ICC’s Office of the Prosecutor was brought by the International Human Rights Clinic of Harvard Law School, the International Federation for Human Rights, and the Colectivo de Abogados José Alvear Restrepo, a Colombian human rights organization, and was made public today at a press conference in Bogotá, Colombia.

The Archive provided more than 48,000 pages of internal Chiquita records to the ICC as part of the communication, including financial records, legal memoranda, handwritten notes, and the secret, sworn testimony of company officials that help to identify individuals at Chiquita who steered millions of dollars in “sensitive payments” to Colombian insurgent groups, government security forces, and right-wing paramilitary militias.

The ICC action comes at an important moment, just as Colombia begins to implement a historic peace agreement ending more than 50 years of conflict with rebels from the Revolutionary Armed Forces of Colombia (FARC). In February, the Colombian prosecutor general ruled that the “voluntary financing” of paramilitary and insurgent groups by corporations like Chiquita should be investigated as crimes against humanity by a special tribunal established by the accord.

The communication asks the ICC “to monitor local Colombian proceedings to ensure they meet ICC standards, particularly with regards to private sector support for the paramilitaries and business’ accountability,” according to today’s press release.

Ten years ago, Chiquita admitted to paying $1.7 million to the United Self-defense Forces of Colombia (AUC), a right-wing paramilitary group responsible for a wave of human rights abuses, including massacres of civilians and targeted killings of politicians, unionists and banana workers. But the guilty plea arranged with the U.S. Department of Justice (DOJ) for funding a foreign terrorist organization only applied to the corporate entity; not a single Chiquita official has ever been held accountable for funding the terrorist group. Civil litigation against some Chiquita officials is pending in U.S. court, but there is little hope that Colombia would be able to gain jurisdiction over non-Colombians involved in financing the AUC.

The Chiquita Papers are key to identifying 14 “Chiquita Suspects” named in a sealed section of the ICC submission “who were involved in overseeing, authorizing, and/or making repeated payments to blocs of the AUC.” In a declaration submitted along with the communication, National Security Archive senior analyst Michael Evans explained how the Chiquita Papers facilitate the identification of company officials behind the payments, including those whose names were omitted from the Factual Proffer agreed to by DOJ and Chiquita as part of the 2007 guilty plea.

A similar process of cross-referencing reveals names of key Chiquita actors that were scrubbed from a 2009 report to shareholders by a committee appointed by Chiquita’s Board of Directors. The declaration also identifies seven Chiquita executives who gave sworn testimony about the company’s payments to Colombian armed groups in a separate investigation conducted in 1999-2000 by the U.S. Securities and Exchange Commission (SEC).

Other records from the Chiquita Papers underlie and strengthen the main allegations in the communication, including:

The communication highlights a 1994 report from Chiquita’s Colombia-based security staff that demonstrates knowledge of paramilitary crimes long before the payments at issue were made. Markings on the fax cover page suggest that this information was shared with individuals at Chiquita headquarters in Cincinnati, Ohio.

“There exist paramilitary groups that keep the guerrilla groups in check; it’s the case that, a few weeks ago, a faction of the oldest group suffered 30 losses in an encounter with these groups. We’ve heard from a witness about how they tied up the guerrillas they’d killed and how they’d pull them until they were able to place them in the Jeeps they had ready for the getaway, in addition to some farmers that affirm that, in parts of their property, some corpses were burned and later buried.” 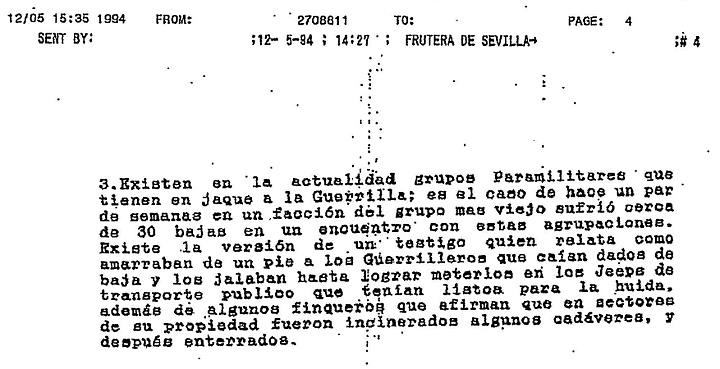 Additional documents published last week as part of a joint investigation between the National Security Archive and VerdadAbierta.com provide further evidence that the security personnel for Banadex, Chiquita’s wholly-owned Colombian subsidiary, had intimate, sometimes firsthand, knowledge of guerrilla and paramilitary atrocities in Colombia. A report from 1995 described the arrival of paramilitaries “ready to do away with everything that smells communist.” A faction paid by Chiquita was said to have “initiated joint patrols” with the newly-arrived paramilitaries.

Another document featured in the ICC filing is a memorandum prepared by Chiquita Senior Counsel Robert Thomas in September 2000 showing both knowledge of paramilitary crimes and, according to the communication, “clear evidence of knowledge at the highest levels of the company and among the Chiquita Suspects of Chiquita’s payments going to the AUC.”

In one section of the memo, Thomas writes that the AUC, here referred to as “Autodefensas,” was a “widely-known, illegal, vigilante organization.” Later, his memo describes how payments to an ostensibly-legal Convivir militia were “forwarded . . . to Autodefensas in Magdalena.” 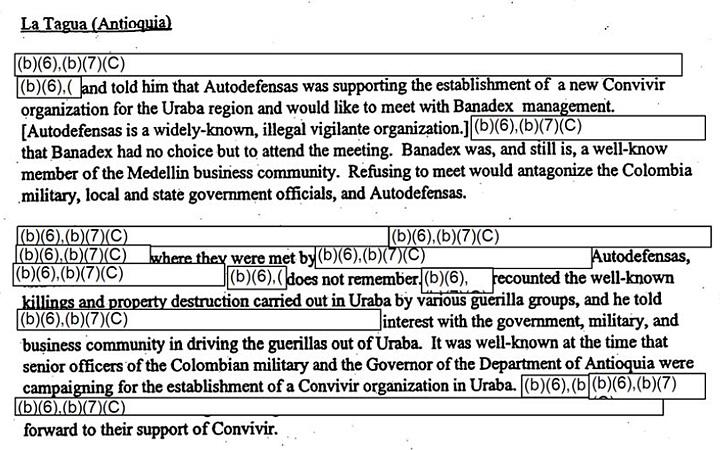 Another version of the Thomas memo with different redactions clearly indicates knowledge that paramilitaries had created a front company, Inversiones Manglar, S.A., to “collect payments” from the Banadex security manager, Juan Manuel Alvarado.

The communication stresses that Thomas’s memo “was written based on research done by one of the Chiquita Suspects in Colombia, was discussed directly with at least one other Chiquita Suspect, and then was presented at the Audit Committee meeting in September 2000 in Chiquita’s Cincinnati headquarters.”

Another document highlighted in the communication shows that Chiquita officials learned about paramilitary atrocities through contemporaneous news reports, pointing to a June 2000 fax from the company’s European Sourcing Department in Costa Rica enclosing an article stating that the AUC was responsible for hundreds of civilian deaths in that year alone. “THE ATTACHED SAYS IT ALL!” according to the fax cover sheet. 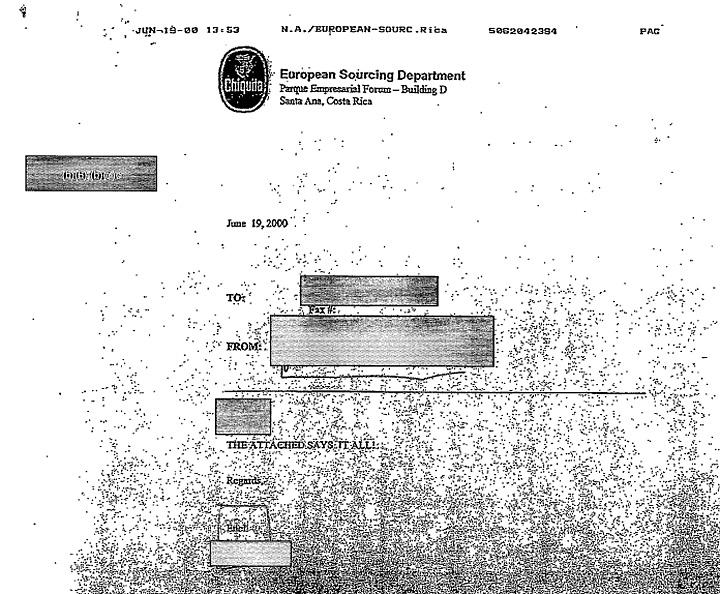 While the communication focuses on payments made between 2002 and 2004, the period of time covered by ICC jurisdiction, the report also looks at key turning points in the company’s approach to the “sensitive payments,” zooming in on 1997 as a period when the company transitioned away from paying guerrilla groups and instead began to fund the paramilitary AUC.

The handwritten notes of Wilfred “Bud” White, Vice President of Internal Audit at Chiquita, underscore the stark choice facing the company at that time: “Cost of Doing Business in Colombia – maybe the question is not why are we doing this[,] but rather[,] we are in Colombia[,] and do we want to ship bananas from Colombia.” White emphasized the “Need to keep this very confidential,” adding, “People can get killed.”

White later told the SEC that Chiquita “gave money to the Convivir”—which later funneled the funds to the AUC—“with the idea that Convivir . . . tried to search out where the guerrillas were” and would then “inform the military so that the military could then go after the guerrillas.”

The Chiquita Papers also provide evidence of the company’s efforts to conceal the payments through what the ICC filing calls an “elaborate payment and accounting scheme.”

A draft memorandum from January 1994 included in the communication, and included in a previous posting, describes the system used to funnel cash to “various guerrilla groups in both Divisions” and identifies some of the security staff and intermediaries who handled and approved the payments. 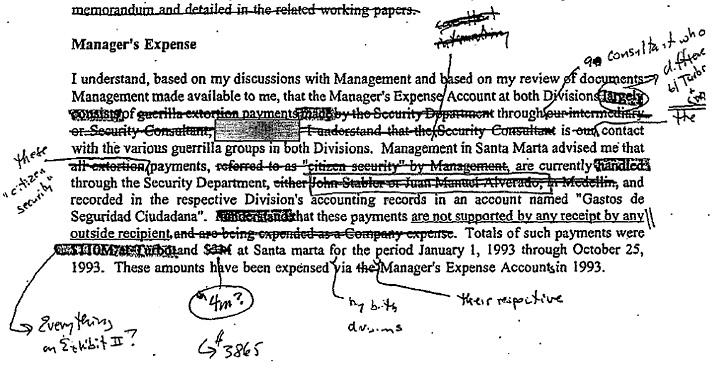 Annotations made on a security payments schedule show that the company used color codes for the names of guerrilla groups like the FARC, the National Liberation Army (ELN), and the People’s Liberation Army (EPL), evidence that the groups bringing the ICC action say shows “a history of intentional and planned payments to armed groups.”

The complexity of the payment schemes developed by Chiquita to manage payments to paramilitary groups is clear in a handwritten memo from March 6, 2000, apparently written by Chiquita senior counsel Robert Thomas, author of the September 2000 “Thomas memo” described above. The earlier memo describes again how false companies were created by paramilitary groups to collect payments from Chiquita and other companies and to disguise “the real purpose of providing security.” 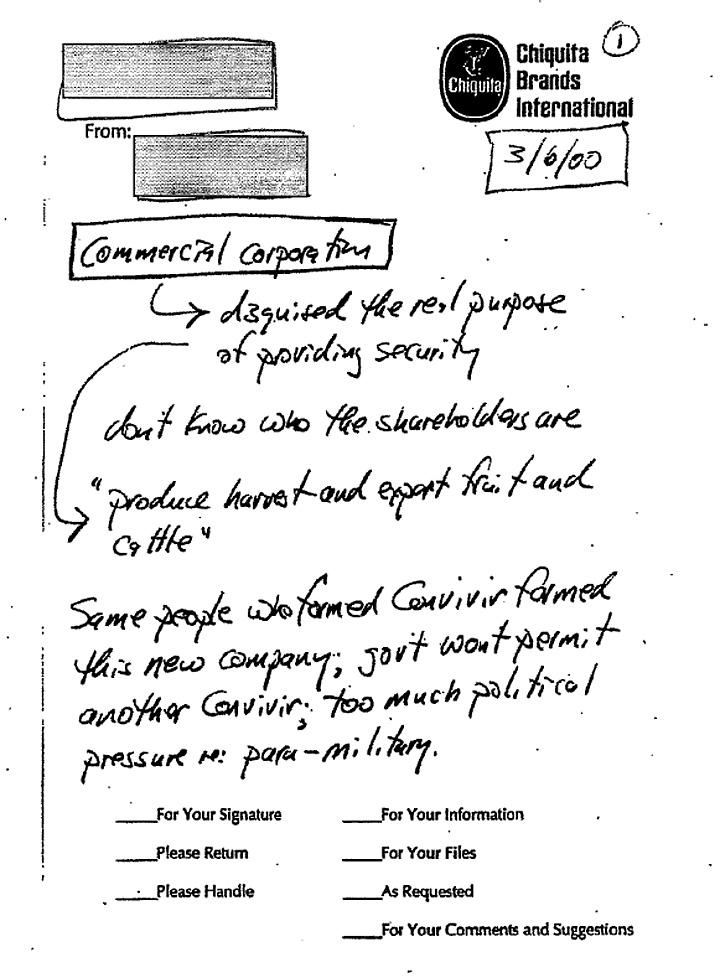 Perhaps most important for the period of ICC jurisdiction, covering payments made from 2002-2004, is a telephone contact memorandum (telcon) apparently written by John Ordman, head of the European Sourcing Division and the subject of an earlier posting by the National Security Archive.

His March 28, 2002, memo is “evidence of the direct involvement of some Chiquita Suspects” in setting up an accounting system to enable the company to continue to make payments to the AUC, covering both the period after the group was put on the U.S. list of foreign terrorist organizations and the years covered by ICC jurisdiction. 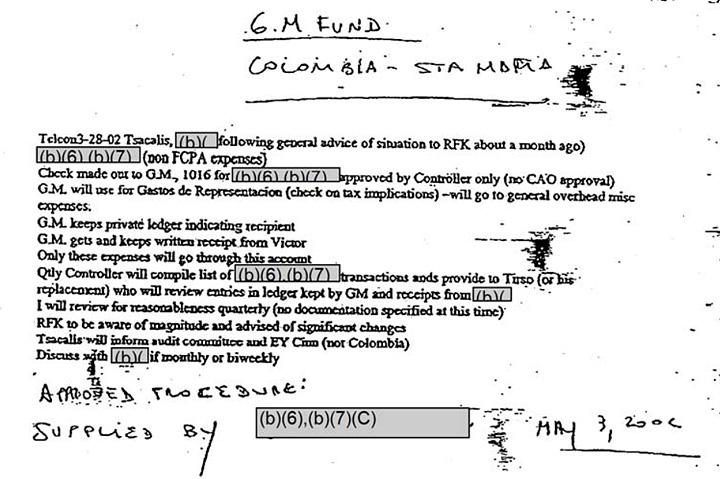 An alternate version of this same document hides some of the names included above, but reveals one additional name (“Tsacalis”) and other key details, such as the fact that the payments were to be made from a General Manager’s Expense fund (“Gastos de Gerente”). 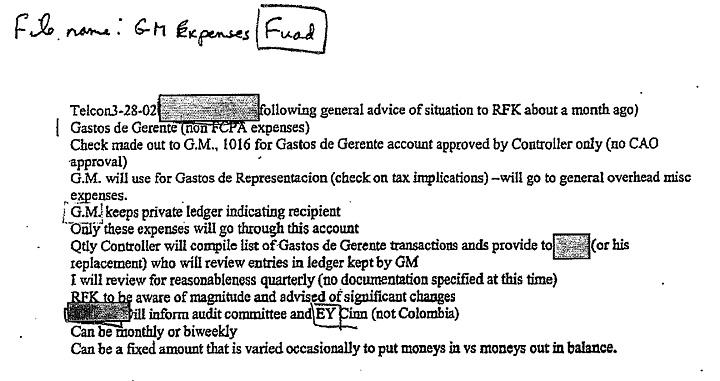 In 2013, Chiquita brought a rarely-seen “reverse” Freedom of Information Act (FOIA) lawsuit against the SEC in an effort to block the agency from releasing transcripts of these depositions (and thousands of additional documents) to the National Security Archive, a non-governmental research group based in Washington, D.C. Two years later, a federal appeals court panel rejected Chiquita’s claim, clearing the way for the release of more than 9,000 pages of the company's most sensitive internal records.

“We request that the ICC expands its current inquiry in Colombia to specifically include Chiquita’s executives and officials,” said Dimitris Christopoulos, President of the International Federation for Human Rights (FIDH), in a statement released today. “The weight of the evidence should lead the Office of the Prosecutor to act if Colombian authorities are not able to.”

Freedom of Information Act Request to U.S. Department of Justice

["ATTACHED SAYS IT ALL!" Fax]
Source

Chiquita Papers Document over $800,000 in Payments to Colombian Guerrillas

The “Cost of Doing Business in Colombia”

“Colombians Seek Probe of Chiquita Execs for Terror Funding”
by Associated Press, The Washington Post, May 18, 2017

“How Bananas Became Big—and Dangerous—Business in Colombia”
by Rick Paulas, Pacific Standard, May 19, 2017