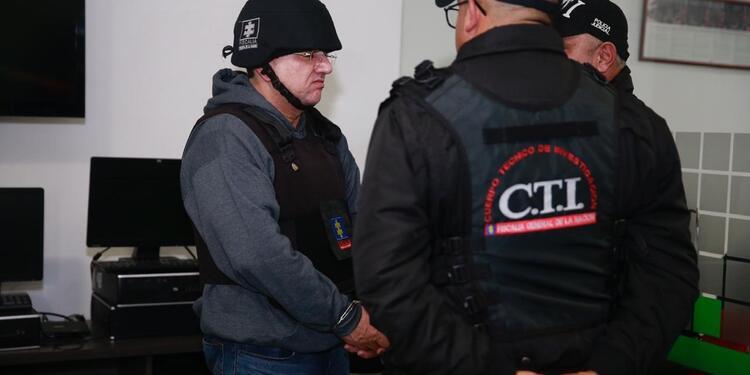 The paramilitary known as “Macaco” (Carlos Mario Jiménez) is arrested upon his arrival in Colombia on July 20, 2019. (Source: Colombia Attorney General’s Office)

Washington, D.C., October 4, 2021 – Declassified State Department and Central Intelligence Agency (CIA) reports that “acknowledge the long-standing relationship between [Colombian] state security forces and the paramilitaries” are among the key evidence behind a historic $12-million judgment against a former Colombian paramilitary leader last week in U.S. federal court in Miami.

Federal Magistrate Judge Edwin Torres found that Carlos Mario Jiménez, the former paramilitary leader known as “Macaco,” was responsible for the murder of Colombian community leader Eduardo Estrada in 2001. The case was developed by the Center for Justice and Accountability (CJA) and the Colombian Commission of Jurists (CCJ) on behalf of victims in Colombia. More than eleven years in the making, the plaintiffs filed the initial complaint on June 15, 2010.

Colombian President Álvaro Uribe extradited Jiménez to the U.S. in 2008, where he was convicted and served 11 years of a 33-year sentence for drug trafficking. His extradition and the subsequent U.S. decision to focus solely on narcotrafficking charges, prevented thousands of victims of Macaco’s paramilitary group, the Bloque Central Bolivar (BCB), from seeking justice for assassinations, massacres, and other acts of violence. In 2019 Jiménez was released and repatriated to Colombia where he was immediately arrested on homicide and conspiracy charges.

In ruling for the plaintiffs, Torres cited “an abundance of evidence” that the BCB “operated in a symbiotic relationship with Colombian state actors” in Colombia’s Magdalena Medio. The evidence helped establish that paramilitaries were operating under color of law when they committed murders and other atrocities, a necessary condition to bring a claim under the U.S. Torture Victim Protection Act (TVPA).

Expert testimony introduced by the plaintiffs cite declassified documents obtained by the National Security Archive and other evidence to show how the BCB and other members of the United Self-Defense Forces of Colombia (AUC) benefitted from a cooperative relationship with Colombian security forces.

A declassified March 2001 Central Intelligence Agency (CIA) report cited by two key experts is an especially vivid example of Colombian state collaboration with Macaco’s BCB just a few months before the Estrada murder. The CIA said that the BCB and another AUC bloc that “were temporarily forced to relocate” by the Colombian Army the previous month “were subsequently released, along with their weapons.” “The Army treated them ‘well,’” according to the report.

University of Toronto professor Luis Van Isschot cited an array declassified evidence from the National Security Archive collection to illustrate the longstanding pattern of cooperation between illegal paramilitary groups and Colombian state actors, including our 2007 posting on the Colombian Army’s links to the paramilitary group known as Triple-A in the late 1970s and records relating to the February 2000 massacre at El Salado.

Other documents cited in the testimony concern Gen. Rito Alejo Del Río, a former Army commander who in 2012 was convicted for the 1997 murder of community leader Marino López. A March 1998 Embassy cable said the former 17th Brigade commander had ordered his troops to work with paramilitary groups in the Magdalena Medio “whenever he was physically absent from the area” and that he had diverted “a planeload of weapons and ammunition to paramilitaries in the Magdalena Medio region in 1985.” Another cable found that Del Río’s “systematic arming and equipping of paramilitaries” in the mid-1990s “was pivotal to his military success at the time.”

Additional records show that US officials had grave doubts whether the Colombian military had any interest in combatting paramilitary groups who they viewed as de facto allies against leftist insurgents. One of these recounts a 1999 meeting in which Colombia’s Deputy Army Commander told U.S. officials that his troops "had no business pursuing paramilitaries," characterizing them as "apolitical common criminals" who "did not threaten constitutional order through subversive activities." Weeks later, the Embassy’s military attaché confirmed that the “Colombian Armed Forces have not actively persecuted paramilitary group members because they see them as allies in the fight against the guerrillas, their common enemy.” A January 1999 cable signed by two top State Department officials decried the fact that “paramilitarism has continued to grow” in Colombia “and that the government has done little to confront them.”

A December 2001 Embassy cable cited by Colombia expert Gimena Sánchez-Garzoli of the Washington Office on Latin America (WOLA) describes an atmosphere of tacit collaboration among paramilitaries and security forces in Barrancabermeja, long a hotbed of insurgent and paramilitary violence. The Embassy said that its Colombian government contacts were “careful not to appear like paramilitary apologists,” but were nevertheless “convinced that Barrancabermeja is better off today than it was a year ago, when still dominated by guerrillas.” Colombian police and military officials claimed, “that the paramilitaries’ increased presence has reduced chaos and violence in Barrancabermeja, but that their success owes much to the fact that, unlike the ELN and FARC, paramilitaries do not attack GOC security forces patrolling the city.”

Another cable cited among the court records describes how Macaco continued to manage his paramilitary empire from prison in 2007 and worked with Vicente Castano and other former AUC members in the hope of reviving a “national network along the lines of the old AUC.” National Police intelligence chief, Gen. Oscar Naranjo, told Embassy officials that Macaco and other BCB members “remain belligerent and committed to anti-subversive rhetoric” and that Castano “enjoys ‘significant collaboration’ from elements of the police and military.”

The civil judgment against Macaco is an important first step in the long-delayed pursuit of justice for BCB atrocities. Claret Vargas, senior staff attorney at CJA, called the decision “a victory for truth.”

“After over a decade of litigation and over a thousand pages of evidence … a court has acknowledged the facts surrounding Eduardo’s assassination and held the head of the BCB liable,” Vargas said in a statement posted to CJA’s website.

CCJ director Gustavo Gallón said he hoped the ruling “will contribute to our accountability efforts for the BCB’s killings, and will also send a strong message to Colombian victims of human rights abuses not to lose hope.”

There is a "body count syndrome" in the Colombian Army's counterinsurgency strategy that "tends to fuel human rights abuses by otherwise well-meaning soldiers trying to get their quota to impress superiors," according to a recently retired Colombian Army colonel whose comments form the basis of this intelligence report. According to the officer, that obsession is in part responsible for commanders "allowing the paramilitaries to serve as proxies for the [Colombian army] in contributing to the guerrilla body count." The 17th Brigade in Uraba had been cooperating with paramilitaries "for a number of years," he said, but it "had gotten much worse" under the command of Gen. Rito Alejo Del Rio.

The officer was critical of several other high-level military commanders, including Gen. Jorge Enrique Mora, who would later serve as armed forces commander. Mora had a clean public reputation, according to the officer, but "probably was one of those who looked the other way" with respect to collaboration with paramilitaries. Former armed forces commander Gen. Harold Bedoya "fell into the same category," in that both officers "never allowed themselves to become directly involved in encouraging or supporting paramilitary activities, but they turned their backs to what was happening and felt the [Colombian army] should in no way be blamed for any resulting human rights atrocities committed.”

Colombia's conflict is at a "strategic stalemate," according to this State Department intelligence analysis. Persistently high levels of violence and human rights violations are likely to expand "in the face of military ineffectiveness." While the military's record may have improved on paper, in practice many Colombian military officers "turn a blind eye to paramilitary activities in their areas of responsibility." Frustration with the inability to effectively confront the guerrillas "has contributed to a jump in paramilitary violations … decreased military aggressiveness in the field, and at least tacit support for paramilitaries, which liquidate suspected guerrillas and sympathizers without legal concerns."

Gen. Rito Alejo Del Rio Rojas, former commander of the Army's 17th Brigade in Uraba, was one of "the two most corrupt Army officers in Colombia," according to a "former Colombian Army officer" who spoke to a U.S. Embassy official on February 27, 1998. Among other things, the source said that Del Rio had ordered his subordinates “to cooperate with paramilitaries” whenever he was away from the area.

This U.S. Embassy cable from August 13, 1998, reports, among other things, that Gen. Del Rio was under investigation for links to illegal paramilitary groups. In a "Biographic Note," the Embassy says that Del Rio's "systematic arming and equipping of aggressive regional paramilitaries was pivotal to his military success at the time."

As reported in this embassy cable, senior Colombian military officials have assured U.S. officials that the military judicial system does not need to be reformed and that the Armed Forces have no business battling paramilitary forces, which they say are the responsibility of the National Police.

In a summary for U.S. Ambassador to Colombia Curtis Kamman, State Department officials Phil Chicola (Office of Andean Affairs) and Leslie Gerson (Bureau for Democracy, Human Rights and Labor) provide their "view of the military/paramilitary situation in Colombia." While much of the document has been excised, it is clear that they are concerned about "the appointment to key positions" of generals credibly accused of ties with paramilitaries, including generals Fernando Millan, Rito Alejo del Rio, and Rafael Hernandez Lopez. "All indications," they conclude, "are that paramilitarism has continued to grow during the Pastrana administration." They add that the government has done little to confront paramilitaries, citing reports that "state security forces did not intervene during 19 separate attacks in which 143 civilians were killed over four days in January."

A CIA intelligence report from just a few months before the Estrada murder says that Colombian Army forces treated BCB and other AUC paramilitaries “well” during an operation the previous month, releasing them with their weapons after briefly relocating them from an area in southern Bolivar.

This cable on the criminal groups emerging in Colombia in the wake of the AUC demobilization indicates that Macaco had continued to run his criminal group from prison and was exploring a new paramilitary alliance with former top AUC leader Vicente Castano, who the Colombian National Police chief said enjoys enthusiastic support “from elements of the police and military.”