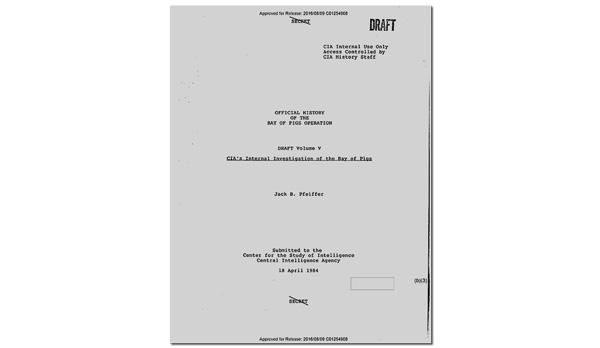 Compiled and edited by Lauren Harper and Thomas Blanton

The following quotes are from Volume V by its author, Jack Pfeiffer:

“After more than twenty years, it appears that fear of exposing the Agency’s dirty linen, rather than any significant security information, is what prompts continued denial of requests for release of these records. Although this volume may do nothing to modify that position, hopefully it does put one of the nastiest internal power struggles into proper perspective for the Agency’s own record.” Page 4.

“He [member of the Inspector General staff Robert Shaffer] also remembers that Kirkpatrick directed the team members to destroy all of their working papers relating to the survey because of the report’s sensitivity.” Page 13. A June 4, 1981, memo on page 149 also notes that “We have no record of any Kirkpatrick ‘working papers’ on this subject. As far as we can tell, all of the OIG survey team’s working papers related to the Bay of Pigs operation survey were destroyed in accordance with Kirkpatrick’s instructions.”

“As Kirkpatrick had suggested to PFIAB [President's Foreign Intelligence Advisory Board], the only way a realistic evaluation of the operation could be made was to put these documents in the hands of an impartial investigator. Reviewed without reference to the four memorandums which make up the Taylor report, the IG and DDP documents appear to be the results of a skunk pissing contest.” Page 145.

“The report on the Cuban Operation, as is true of all Inspector General reports, was prepared under my personal direction and worked on by myself and my deputy, Mr. David McLean, as well as the three officers who did the principal collecting of information and preparation of the text: Messrs. Dildine, Shaffer, and Shea. The final editing was done by myself personally and the report represents the views of the Inspector General.” Page 154. The names of Dildine, Shaffer, and Shea were not previously publicly known.
“Appendix D: Questions for Mr. Dulles.” Pages 157-159. This Top Secret appendix was also not previously publicly released.

Washington, D.C. October 31, 2016 - The CIA today released the long-contested Volume V of its official history of the Bay of Pigs invasion, which it had successfully concealed until now by claiming that it was a “draft” and could be withheld from the public under the FOIA’s "deliberative process" privilege. The National Security Archive fought the agency for years in court to release the historically significant volume, only to have the U.S. Court of Appeals in 2014 uphold the CIA’s overly-broad interpretation of the "deliberative process" privilege. Special credit for today’s release goes to the champions of the 2016 FOIA amendments, which set a 25-year sunset for the exemption:  Senators John Cornyn, Patrick Leahy, and Chuck Grassley, and Representatives Jason Chaffetz, Elijah Cummings, and Darrell Issa.

Chief CIA Historian David Robarge states in the cover letter announcing the document’s release that the agency is “releasing this draft volume today because recent 2016 changes in the Freedom of Information Act (FOIA) requires us to release some drafts that are responsive to FOIA requests if they are more than 25 years old.” This improvement – codified by the FOIA Improvement Act of 2016 – came directly from the National Security Archive’s years of litigation.

The CIA argued in court for years – backed by Department of Justice lawyers – that the release of this volume, written by Agency historian Jack B. Pfeiffer, would “confuse the public.” National Security Archive Director Tom Blanton says, “Now the public gets to decide for itself how confusing the CIA can be.  How many thousands of taxpayer dollars were wasted trying to hide a CIA historian's opinion that the Bay of Pigs aftermath degenerated into a nasty internal power struggle?” Archive senior analyst and Cuba Project Director Peter Kornbluh notes, “We know now why the CIA attempted to cover up this document for so long. It is a vivid historical example of what Pfeiffer called ‘the agency's dirty linen’ that CIA officials never wanted to air in public."

Legal Fight for the Volume’s Release

CIA Allowed to Sustain Cover-up of Bay of Pigs History
May 10, 2012

CIA Claims Release of its History of the Bay of Pigs Debacle Would “Confuse the Public.”
April 17, 2012

The first FOIA request for the draft history came from its author, retired CIA historian Dr. Jack Pfeiffer, who wanted to publish all or parts of what he had written; but the CIA applied the “deliberative process” exemption to withhold the draft.  Subsequently, the JFK Assassination Records Review Board opened the first volume of the five-volume draft; and Professor David Barrett of Villanova University brought the JFK Board result to public notice.

Archive senior analyst Peter Kornbluh obtained through FOIA the CIA’s own inspector general report on the Bay of Pigs disaster and published it in book form in 1998; and Peter led the Archive’s efforts around the Bay of Pigs 50th anniversary in 2011 to open up the Pfeiffer history volumes.  Thanks to attorney David Sobel, who represented the Archive in our FOIA case for the rest of the history, the CIA was forced to admit the history was not classified and to release the second, third, and fourth volumes.  Then, when the CIA asserted the fifth volume was still covered by “deliberative process” as a draft, superb attorneys Cliff Sloan, Allon Kedem, and Greg Craig of the law firm Skadden, Arps, Slate, Meagher & Flom, took the case to the U.S. Court of Appeals for the D.C. Circuit. The Circuit’s 2-1 opinion against the Archive noted that Congress had never put a time limit on the “deliberative process” exemption. In 2016, Congress did so.