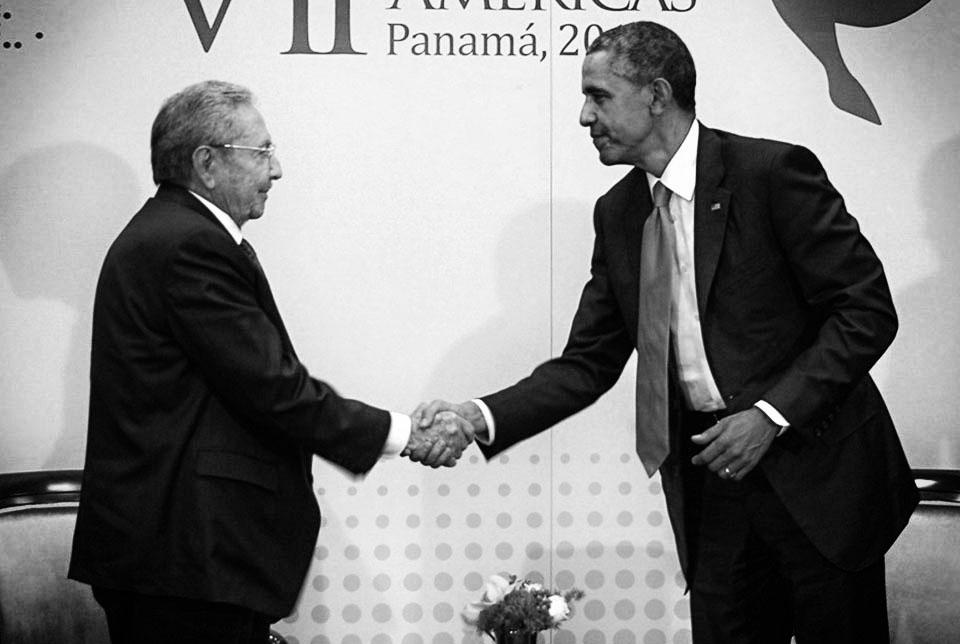 Raúl Castro meets with President Obama on the sidelines of the 7th Summit of the Americas in Panama City, Panama in April, 2015. Estudio Revolucion/Xinhua/ZUMA 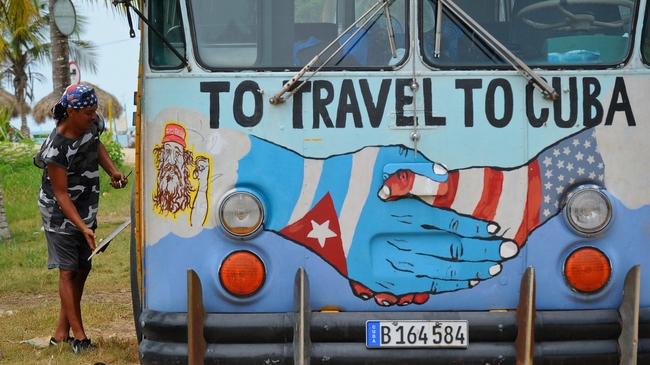 A bus promotes U.S. tourism in Cuba in an era of improved U.S.-Cuban relations. 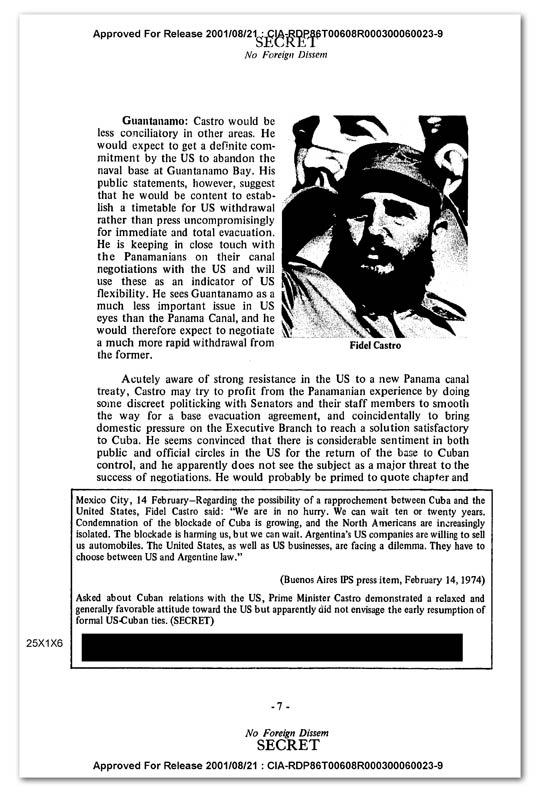 Washington D.C., December 15, 2017 - With the approach of the 3rd anniversary of “17-D”—the iconic date of December 17, 2014, when President Barack Obama and President Raul Castro made public a historic breakthrough in U.S.-Cuba relations—the National Security Archive today announced the publication of a major collection of declassified records on the history of talks between the two nations.

The collection, Cuba and the U.S.: The Declassified History of Negotiations to Normalize Relations, 1959-2016, provides the historical foundation for the 18 months of back-channel diplomacy between Obama and Castro’s special emissaries, and the December 2014 agreement to resume full diplomatic ties.

Made up of over 1,700 declassified reports, memoranda of conversations, options papers, cables, intelligence assessments and secret communications between Washington and Havana, the new collection charts the initial breakdown of relations during the Eisenhower era, and subsequent bilateral attempts to re-build channels of communications, including secret talks to improve or normalize relations during subsequent administrations. Through the documentation, the collection tells the comprehensive stories of top secret efforts by Presidents Kennedy, Ford, Carter and Clinton to negotiate solutions to the conflict with Cuba, as well as Fidel Castro’s personal initiatives to reach out to multiple U.S. presidents with gestures of peaceful co-existence.

The collection includes a number of pivotal and revealing records, among them:

The collection was built around the research files compiled by Archive Cuba Documentation Project director, Peter Kornbluh, and American University professor, William M. LeoGrande for their award-winning book, Back Channel to Cuba: The Hidden History of Negotiations Between Washington and Havana.  Like the book, the collection charts the history of communications, dialogue, secret and public negotiations between Washington and Havana, from 1959 to the end of the Obama era in 2016.

“Here, for the first time in one collection, are contemporary records documenting half a century of secret diplomacy with Cuba,” notes Professor LeoGrande. “These declassified documents provide an inside view of the diplomatic failures and successes of Washington’s back channel to Cuba.” The documents, according to Kornbluh, “provide the declassified historical roadmap to the breakthrough in relations on 17-D.”

The last document in the collection is a private letter President Obama provided to members of the Cuba policy advocacy community who attended the White House commemoration last year on the 2nd anniversary of “17-D.” “I am pleased to join in marking two years of progress since the historic decision made by the United States and Cuba to begin normalizing relations after decades of conflict,” Obama wrote. “By continuing to work together, we can further change an outdated approach that has failed to advance either of our interests and forge a future of greater peace and security.”

Cuba and the U.S.: The Declassified History of Negotiations to Normalize Relations, 1959-2016 is available through the digital publisher ProQuest; it can also be accessed by researchers in the reading room of the National Security Archive at George Washington University.

Read a “top ten” selection of documents from Cuba and the U.S.: The Declassified History of Negotiations to Normalize Relations, 1959-2016

Letter, Obama Letter to Advocates of Policy Change Toward Cuba, December 14, 2016 (not classified).

On the second anniversary of the breakthrough in U.S.-Cuban relations, the Obama administration hosted a special reception at the White House for advocates of change in U.S.-Cuban relations. Obama provides this letter to the people who attended, urging them to keep working on better relations after the end of his presidency. "By continuing to work together," he writes, "we can further change an outdated approach that has failed to advance either of our interests and forge a future of greater peace and security."

In early 1982, President Reagan decided to send retired CIA deputy director Vernon Walters to Havana for a secret meeting with Fidel Castro regarding Cuba's role in Central America. These "talking points" for Walters threatened that if Cuba did not withdraw its material support for insurgency in El Salvador, "the use of force is an option which we do not exclude."

With this directive, Jimmy Carter becomes the first U.S. president to direct his officials to "attempt to achieve normalization of our relations with Cuba." His directive authorizes a series of steps and secret communications with the Cubans which eventually led to the reestablishment of partial diplomatic ties.

Based on intelligence gathered from a Cuban military attache in Latin America, the CIA reports that Cuba is ready for direct talks with the United States to normalize diplomatic and economic relations. According to the intelligence cable, "the Cuban hierarchy is in unanimous agreement that negotiations with the U.S. should begin as soon as possible."

As Secretary of State Henry Kissinger pursued secret talks with Cuba, the CIA produced a comprehensive assessment of Fidel Castro's position on improving relations. Their intelligence analysis indicates that Castro is interested in better relations, but is in "no hurry" to pursue them and will "accept no loss of prestige" in talks with the U.S. According to the CIA, Castro expects the U.S. to take the initiative on better relations.

For the first secret meeting with Castro representatives, Kissinger sends an "aide memoire" to be shared with them. The message adopts a moderate civil tone conducive to negotiations for better relations. The "ideological differences between us are wide," the document states. But talks would still be useful "in addressing concrete issues" between Cuba and the United States. The United States offers to make several small gestures to improve the atmosphere for future negotiations.

In the aftermath of the Kennedy assassination, Fidel Castro transmits this back-channel message to President Lyndon Johnson, using an ABC reporter to carry it back to the United States. Castro's message informs Johnson of secret talks with Cuba during the Kennedy administration and of Cuba's interest in continuing those talks. Castro offers to ignore U.S. provocations during the 1964 presidential campaign, in order to assure that Johnson is elected over Barry Goldwater.

In this memorandum to Secretary of State Dean Rusk, Attorney General Robert Kennedy opposes the prosecution of U.S. students who have challenged the travel ban to Cuba. He argues that the ban should be lifted because it is "un-American" to restrict the civil liberties of U.S. citizens to travel where they want. Prosecuting college students will quickly become impractical, he warns, because they will continue to travel in greater numbers to Cuba, despite threats of legal penalties.

This memorandum records President Kennedy's position on negotiating better relations with Cuba. Kennedy rejected the State Department's conditionality for talks, and directed U.S. officials to "start thinking along more flexible lines" in their approach to negotiating with Castro.

Memorandum of Conversation, "Rough Draft of Summary of Conversation Between Vice President and Fidel Castro," April 25, 1959 (not classified).
Source

During Fidel Castro's first, post-revolution, visit to the United States in April 1959, he met with Vice President Richard Nixon on Capitol Hill. This memcon, drafted by Nixon's office, records a lengthy, detailed discussion. Although Nixon later selectively quoted from this document in his memoirs to make himself appear "anti-Castro," the document suggests that he was favorably impressed with Castro's charisma and leadership qualities.

How Did Fidel Castro Hold On to Cuba for So Long?
The Atlantic
Nov 26, 2016
Is Normalization With Cuba Irreversible?
The Nation
Apr 6, 2016
Barack Obama, Our Man in Havana
The Nation
Mar 22, 2016
Obama Visits Cuba in Historic Trip, But Will U.S. Ever End Embargo & Give Back Guantánamo?
Democracy Now
Mar 21, 2016
White House and Cuba Maneuver Over Obama’s Visit
The New York Times
Mar 6, 2016
Inside the Crazy Back-Channel Negotiations That Revolutionized Our Relationship With Cuba
Mother Jones
Oct 1, 2015
Back Channel to Cuba
The Hidden History of Negotiations between Washington and Havana
By William M. LeoGrande
and Peter Kornbluh