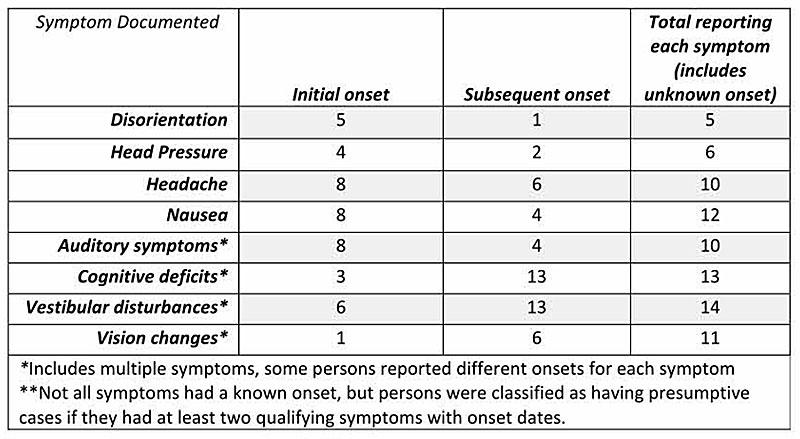 “For Official Use Only” Report Surfaces a Year after Completion 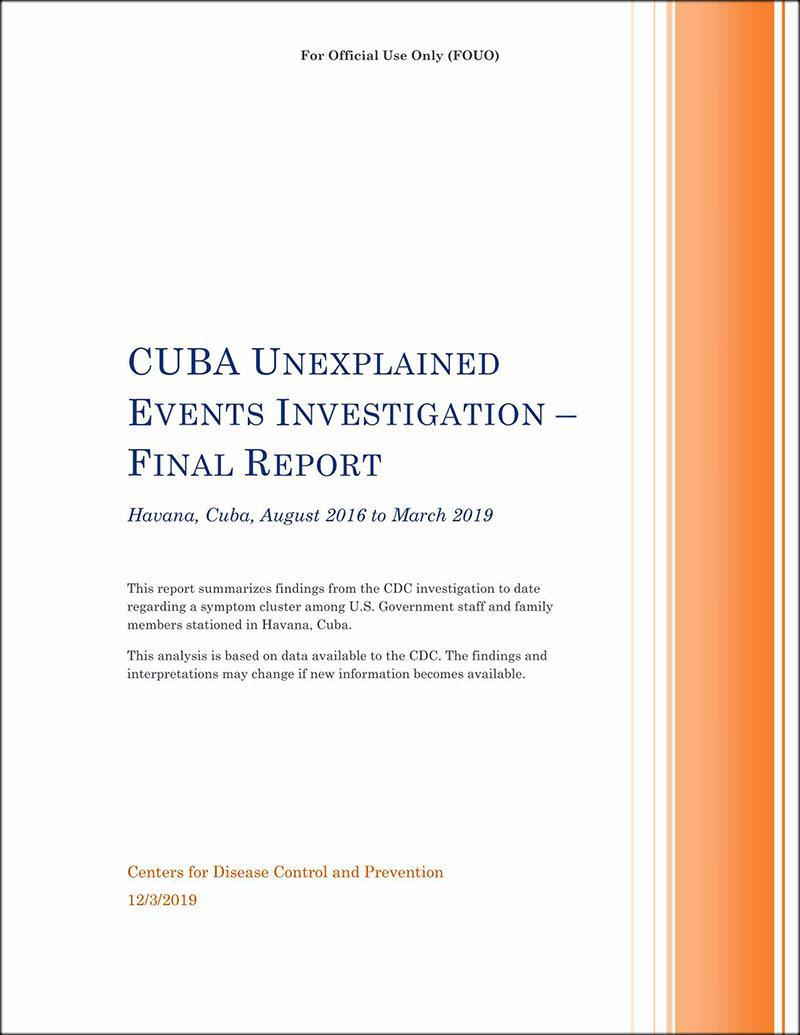 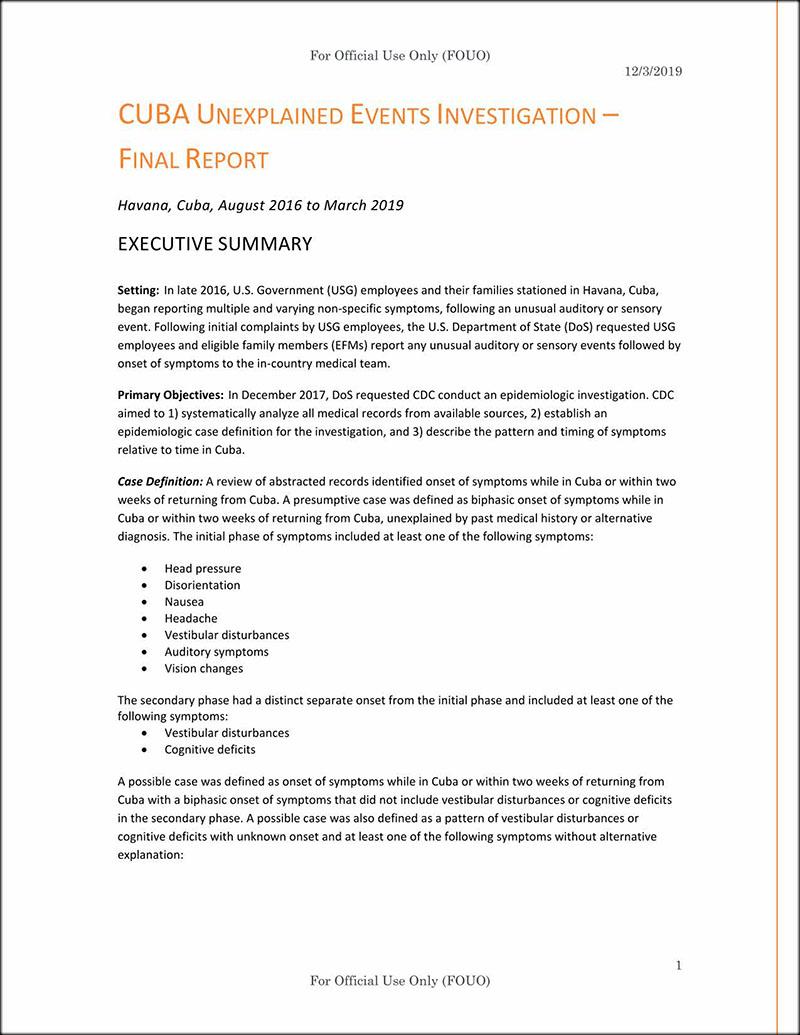 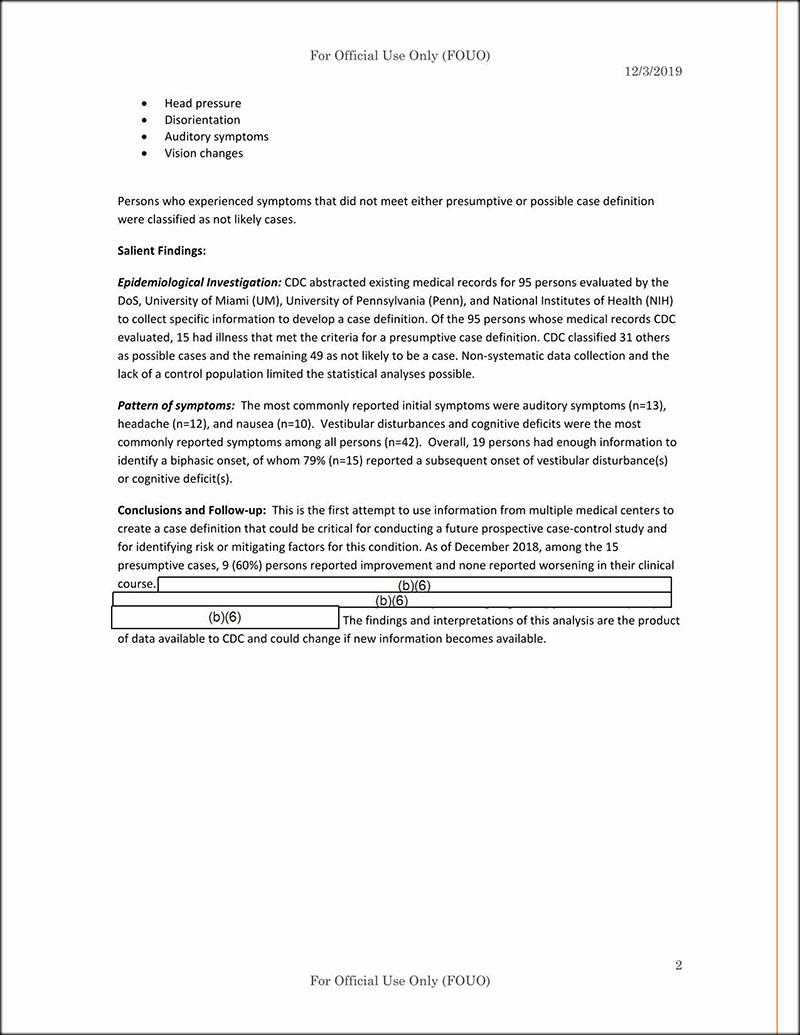 Washington, D.C., February 2, 2021 – The Centers for Disease Control and Prevention (CDC) conducted a two-year “epidemiologic investigation” of the mysterious medical incidents suffered by U.S. personnel in Cuba but could not determine the nature of the injuries nor the cause, according to an 18-page CDC report posted by the National Security Archive today.  “The evaluations conducted thus far have not identified a mechanism of injury, process of exposure, effective treatment, or mitigating factor for the unexplained cluster of symptoms experienced by those stationed in Havana, Cuba,” concluded the CDC study.

Titled “Cuba Unexplained Events Investigation—Final Report,” the CDC study was completed more than a year ago. But its existence was revealed only after a more recent evaluation by the National Academy of Sciences which referenced the CDC report leaked to the press in December. The National Security Archive obtained the redacted CDC study through the Freedom of Information Act in January 2021, as did Buzzfeed.com.

On December 29, 2017, the State Department’s Bureau of Medical Services formally requested a CDC inquiry into the “unexplained phenomenon” of brain-related symptoms suffered by CIA and State Department personnel and family members in Havana. According to the report, CDC researchers reviewed the case files of 95 individuals who had received medical evaluations at the State Department, National Institutes of Health, and medical centers at the University of Miami and University of Pennsylvania. Fifteen patients met the “epidemiologic case definition” the CDC established and were identified as “presumptive cases.” Another 31 were considered “possible cases;” the 49 remaining individuals were ruled out as having experienced what has been called “the Havana Syndrome.” 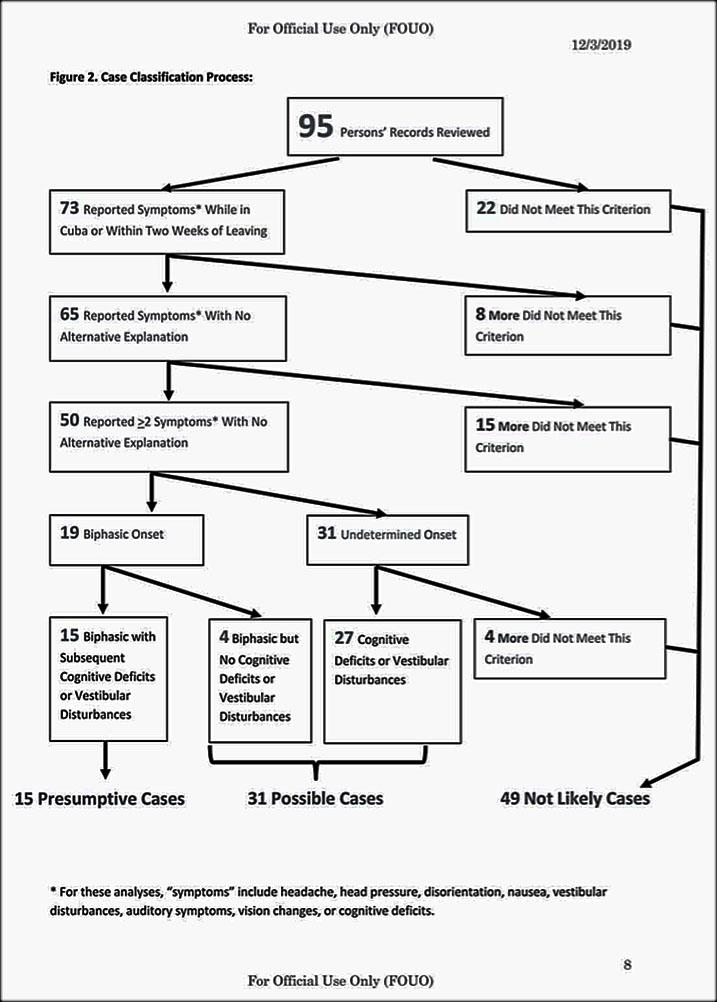 CDC breakdown of 95 cases of possible exposure to the Havana Syndrome.

Although the CDC investigation failed to identify a cause for the cluster of symptoms—among them headaches, nausea, tinnitus, disorientation, and cognitive deficits—the study does shed further light on how the State Department responded to early reports of health problems. The report confirms what has been widely reported in the media—that in late December 2016, the first individual (reported in the media to be a CIA officer) went to the medical unit in the U.S. Embassy in Havana for evaluation of “vestibular disturbances, vision changes, cognitive deficits, auditory symptoms, sleep impairment and headaches.” After a second U.S. official—also identified as from the CIA Station by other media sources—reported “an unexplained onset of similar symptoms” in early February 2017, the State Department issued an advisory to U.S. personnel in Cuba to share “any unusual auditory and sensory events” and symptoms with the in-country medical team.  “Additional USG employees reported similar unexplained symptoms, some pre-dating the onset of the original report,” CDC investigators found.

According to the report, the State Department subsequently developed a clinical protocol called HABIT—“Havana Acquired Brain Injury Tool”—to screen U.S. personnel for the neuro-cognitive symptoms reported in Cuba. Although the Department of State commissioned the CDC investigation at the end of 2017, it did not provide CDC analysts with unredacted medical records for evaluation until eleven months later, in November 2018.

“The primary steps of an epidemiologic investigation are to establish the existence of an outbreak and verify the diagnosis,” the report stated in its conclusions. “However, one challenge with this investigation is the lack of a well-defined diagnosis and an uncertain source of exposure attributable to the physical symptoms experienced by USG employees….”

THE NATIONAL ACADEMY OF SCIENCES STUDY

The CDC study was first identified in the National Academy of Sciences (NAS) report which was also commissioned by the State Department, and also inexplicably withheld from congressional and public scrutiny after it was submitted in August 2020. Only after key senators learned of its existence later in the fall and pressed then-Secretary of State Mike Pompeo to turn it over did the Trump administration finally provide the report to a few Senate offices. The New York Times and NBC News first reported details of the unclassified NAS study, titled “An Assessment of Illness in U.S. Government Employees and Their Families at Overseas Embassies,” in early December.

The NAS assembled a “standing committee” of nineteen scientists, doctors and analysts to evaluate a series of theories on what caused the mysterious maladies, among them microwave devices, mass hysteria, viral diseases, and pesticide poisoning from Cuban fumigation for the Zika virus--a clinical theory developed by a Canadian medical research team in Halifax commissioned by Canada’s Global Affairs ministry. The NAS team concluded that the “most plausible” cause was a “directed, pulsed radiofrequency energy” device, but stressed that this conclusion was speculative because of the lack of access to relevant U.S. government information. “In particular, much of the detail and many of the investigations performed by others were not available to [the NAS committee],” the report stated, “either because they are classified for reasons of national security or restricted for other reasons (e.g., internal department deliberations, protected health information, etc.)”

After reviewing the NAS report, six U.S. senators led by Senator Jeanne Shaheen and including Senator Patrick Leahy, and Senator Susan Collins, called on Pompeo to provide the extensive documentation that the State Department has compiled on the ‘Havana Syndrome.’  In their January 12, 2021, letter, the Senators expressed their concern that “thus far, the Department has not been forthcoming with key details about the incidents involving the serious injuries incurred by several of those personnel” and demanded more transparency. “We also have very limited information regarding the Department's assessment of causation and ways to prevent future incidents.  It is imperative that the Department provide us the relevant information currently in its possession."

With the Biden administration in place, and Secretary of State Anthony Blinken’s newfound emphasis on transparency, the opportunity to solve the mystery of the ‘Havana Syndrome’ now exists, according to Peter Kornbluh, who directs the Archive’s Cuba Documentation Project. “The secrecy surrounding the ‘Havana Syndrome’ has undermined the ability of Congress, the public, and afflicted U.S. government personnel to obtain long-overdue answers,” Kornbluh said. “The Biden administration can advance both the need-to-know and the right-to-know by declassifying the documents.”

The National Security Archive is today posting a PDF of the CDC report and links to the NAS report and to the Halifax medical study on the Zika virus fumigation in Cuba, commissioned by the Canadian government’s foreign ministry, Global Affairs Canada.

Document 2
An Assessment of Illness in U.S. Government Employees and Their Families at Overseas Embassies
National Academy of Sciences
August 2020

ARB on Havana Syndrome Response: Pray Tell, Who Was in Charge?
Diplopundit
Feb 16, 2021