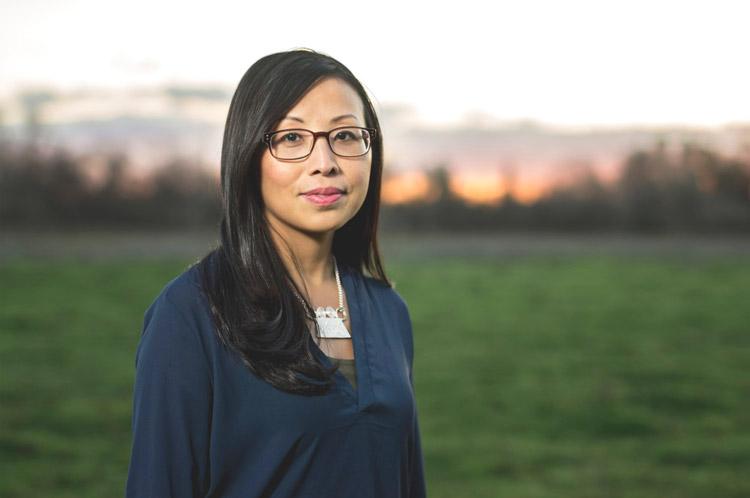 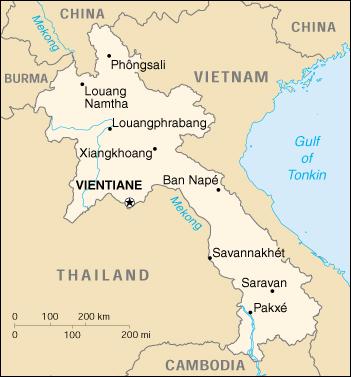 Many Hmong refugees fled their homeland in northwestern Laos for camps in Thailand from the mid-1970s to mid-1980s. 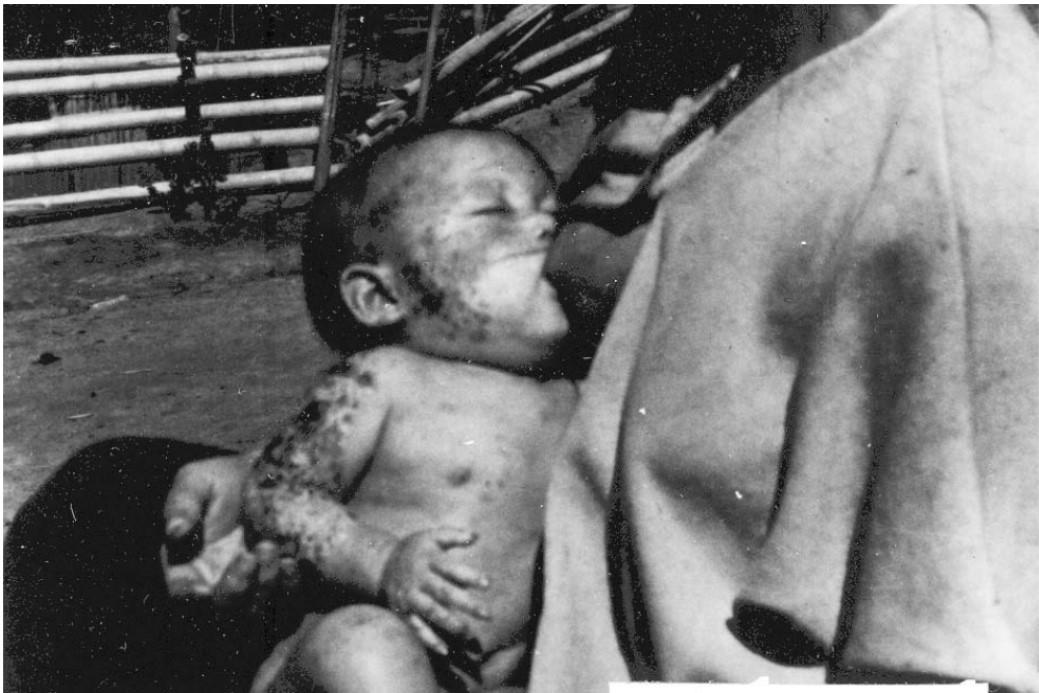 A Laotian child said to be suffering the effects of yellow rain. (Katz & Singer, 2007)

Washington, D.C., June 27, 2022 – In a remarkable example of transforming the mundane into high art, poet Mai Der Vang, daughter of Hmong refugees and finalist for the 2022 Pulitzer Prize in Poetry, pored through thousands of pages of declassified documents from the collections of the National Security Archive and other sources to find material for her poems, whose purpose is to record and vivify the trauma experienced by the Hmong people during the Secret War in Laos of the 1960s and 1970s.

Vang’s new volume is called Yellow Rain, a reference to the mysterious, lethal substance whose existence the Hmong began to report in the late 1970s, after the American withdrawal from Indochina.  During the Vietnam War, the United States had relied on Hmong tribesmen in their fight against the Communists, then faced widespread condemnation for abandoning them to the mercy of the victorious Vietnamese and Pathet Lao regimes after the U.S. military pulled out.

The story Vang powerfully conveys is multilayered, mixing elements of Cold War ideology, great power and neo-colonial dominance, the politics of history, the intersection of science and lived experience, the difficulty of assessing larger truths, and the uneven quality of the historical record.

The Pulitzer committee praised the collection’s achievement in "examining the biological warfare that threads through the wars of the Hmong, acknowledging those who perished and the trauma of those who survived in lyrics of witness that defy erasure," adding that the fact that "Mai Der Vang is the first Hmong-American finalist in arts and letters ... is particularly notable given that the Hmong had no written language until the 1950s."

Hmong and other eyewitnesses who fled to Thailand described the strange, sticky liquid as causing plant life to die and humans to suffer skin blistering, blindness, seizures, and other maladies.  They said it was dropped from overflying aircraft.

In September 1981, Secretary of State Alexander Haig announced that the U.S. government had identified yellow rain as a form of mycotoxin called trichothecene, a chemical they claimed the Soviet Union was weaponizing and supplying to its proxies in Vietnam, Laos, and Afghanistan where the Red Army was battling the Mujahedin.  CIA and Defense Intelligence Agency studies backed up the charge.

But skepticism over the Reagan administration’s motives – i.e., the suspicion that the new president was mainly trying to score propaganda points against the Soviets – clouded the picture.

In 1985, an influential academic study published in Scientific American by a group of respected biologists and biochemists including Harvard’s Matthew Meselson promulgated a very different thesis: that the liquid was not a chemical weapon but a natural substance – feces released by wild Southeast Asian honeybees, Apis dorsata, during “massive defecation flights” that could cover “thousands of square meters.”[1]

Over time, several other governments and the United Nations conducted their own assessments, but they did little to resolve the puzzle because of a host of logistical and investigative challenges that muddied their conclusions and because of security classification decisions.  In all the years since the first reported appearances of yellow rain, and despite the release of thousands of government records, at least one doctoral dissertation, scholarly book chapters, and public declarations by former intelligence officers, the debate has never been settled to everyone’s satisfaction.[2]

In September 2012, a controversy-within-the-controversy developed when the well-known podcast Radiolab resurrected the story, but its hosts came under fire for insensitivity toward a Hmong interviewee who held to his own eyewitness account despite the scholarly findings about natural causes.[3]  In fact, it was Radiolab’s report that stimulated Vang to start digging into this history.

Vang’s volume does not directly address the dispute, but she clearly believes the “rain” was human-generated and her poems are suffused with the perspectives and evidence found in the many CIA, State Department, and other historical records she reviewed for months before beginning to write.  As she told an interviewer in 2021:

I think I set out attempting to find some semblance of an answer to yellow rain not knowing what shape or form it might show itself as. I came out of it realizing that for me, personally, the book itself is my answer. It is my own explanation toward the reality that we may never have the “known” public answers about what happened.[4]

The poems themselves also make clear that Vang’s main goal is to convey a larger truth: about the nature and consequences of superpower interventions in Southeast Asia, the exploitation and abandonment of local proxies, and the acute effects on her fellow Hmong – who in turn reflect the travails of other vulnerable peoples around the world.

The Archive is pleased to have been able to help with Mai Der Vang’s personal quest to come to grips with this haunting history of her people.  Vang generously contributed to this posting by responding to questions about her explorations into the declassified record and by selecting 10 examples of government documents that fed directly into her work.

Here are the author’s responses to our questions; her words will likely resonate with anyone who has spent time in the archives:

What led you to explore the declassified history of yellow rain?

As a daughter of Hmong refugees, I have long been both interested in and troubled by the issue of yellow rain. In particular, it's nagged at me that the Hmong allegations were dismissed in favor of the bee feces theory. I officially started the research process a decade ago in 2012 when Radiolab aired a contentious episode on yellow rain. I wanted to look into it further and see if I might be able to learn something, maybe even write about it. As a poet, I took to writing poems to disassemble and reassemble the story of yellow rain.

When you read these documents, what were your expectations?  Were you looking for something in particular?  Did what you found surprise you in any way?

I was trying to find anything I could about yellow rain, and because I didn’t have any particular expectations, I was able to find more than I anticipated. It was daunting at first to be confronted with all these boxes and their materials. I kept thinking, how am I am going to get through all of this? But somehow I just did, page by page, and then I began to notice patterns in the documents, whether it was in the language or the graphics, and then themes began to emerge and suddenly I found myself coming home with over 2,000+ pages. Ultimately, what I realized was that staying open to what I might discover allowed me to follow the documents and see where they might lead. And yes, I did come across things that surprised me, or topics I had not even considered, which was extremely helpful.

What would you say, especially to young people today, about the importance of “going to the source” when trying to understand the past? (And how should they approach the pitfalls of that exercise – i.e., how do you know whether to trust that source?)

I feel fortunate to have had access to these documents and am grateful to the people and organizations who serve as its caretakers. I’d say to young people that if you have a chance to go to the “source” and if that source has been made accessible to you, then why not go for it and dig? Even as education teaches us that we already supposedly know the history of things, there is still so much we don’t know about the past and so much more to be revealed.

When it comes to assessing the documents, I’m no expert, but my sense is that the more you apply yourself to these documents, the more discerning a reader you become, and the more you’ll be able to judge the usefulness of what you’re looking at.

Perhaps the most important piece of advice is to follow your gut. With yellow rain, something about it didn't feel right to me: the discrediting of the Hmong testimonies, the sudden propping up of the bee feces theory, the heated Cold War discourse around arms development vs. arms control, particular political interests, too, around international arms treaties.

I went into this process open to what I might find and I came out of it wanting to write a book that would challenge the official account on yellow rain, to offer a counternarrative that would serve as a public and poetic reckoning of the aftermath. That’s what the process did for me, and I’m grateful I followed it.

The following list provides the title and source for each declassified document along with the name of the poem it relates to and the page numbers where the poem can be found in Yellow Rain.

A declassified cable, dated September 3, 1985, from the US Embassy in Bangkok to the Secretary of State in Washington, DC, subject heading: “Alleged atrocity in Laos.”
Source

Poem: “A Daub of Tree Swallows as Aerial Ash” (on page 25 of YELLOW RAIN)

Poem: “A Moment Still Waiting for You” (on page 99 of YELLOW RAIN)

A declassified report to the Congress, by the Comptroller General of the United States, “US Lethal Chemical Munitions Policy: Issues Facing the Congress, Department of Defense,” dated September 21, 1977.
Source

A declassified cable, dated October 16, 1981, from the US Embassy in Bangkok to the Secretary of State in Washington, DC, subject heading unknown.
Source

A declassified cable, dated October 28, 1983, from the US Embassy in Bangkok to the Secretary of State in Washington, DC, subject heading: “Hmong CBW sample.”
Source

[2] For an authoritative and fairly recent update on the state of the main scholarly arguments, see Anne Clunan, Peter R. Lavoy and Susan B. Martin, eds., Terrorism, War, or Disease? Unraveling the Use of Biological Weapons (Stanford University Press, 2008).  It includes chapters by Meselson and by then-George Washington University global health expert Rebecca Lynn Katz, who wrote her 2005 doctoral dissertation at Princeton on yellow rain and later was a State Department consultant on bioweapons matters.  In this volume, the two specialists continued to reach very different conclusions about basic questions such as whether chemical or toxin weapons attacks occurred in Southeast Asia.  Biological weapons expert Milton Leitenberg has also written about this issue.

[4] Interview with Kao Kalia Yang, A Public Reckoning With the Truth About Yellow Rain and the Secret War - Electric Literature, September 21, 2021. 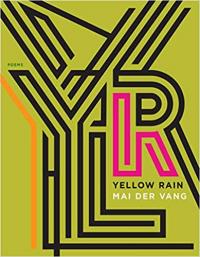