Washington D.C., May 10, 2018—Five years ago today, one of the most celebrated human rights trials in Latin America came to a stunning conclusion when Guatemalan dictator, retired Army general, and self-proclaimed “president” Efraín Ríos Montt was convicted for genocide and crimes against humanity by a panel of three Guatemalan judges.

To commemorate that milestone in Guatemalan history, the National Security Archive is posting the groundbreaking ruling that was issued on May 10, 2013, by the court that found Ríos Montt guilty. The Archive is also making a collection of 15 declassified documents available that chronicle Washington’s unabashed support for the dictator at the height of his powers, and the US Embassy’s determination to ignore the violence unleashed by his Army against civilians.

The verdict was unprecedented in Guatemala and around the world; never before had a former head of state been convicted by his own country’s justice system for the crime of genocide. Ríos Montt, 86 years old at the time of the 2013 trial, was sentenced to 80 years in prison. Many of the hundreds of spectators present in the courtroom stood and clapped, wept, and cheered as the verdict was read.

But the court’s decision was felt most powerfully by survivors of the Guatemalan Army’s scorched earth campaigns, which in the early 1980s sought to destroy them, their villages, and their culture in the Maya Ixil region of the country’s northwest. Ninety-seven men and women testified before the tribunal in the course of the almost two-month proceeding. They described repeated military sweeps through the Ixil communities that left a trail of death and mayhem in their wake. According to the testimonies, the soldiers massacred entire communities, raped and tortured their victims, looted and destroyed homes, hunted down fleeing refugees with helicopters, and occupied and destroyed sacred Mayan sites. Those captured were corralled into militarized camps where they were forced to stay, sometimes for years.

The witnesses’ searing words are preserved in the genocide tribunal’s ruling, a 718-page document that not only pronounces the sentence on Ríos Montt (see page 682 and ff.), but summarizes the statements of all 97 survivors, reports from dozens of expert witnesses, Guatemala military and other government documents, results from exhumations, truth commission reports, and human rights publications.

This is the story of just one of the 97 survivors of Ríos Montt’s Army attacks on the Ixil region of El Quiché in 1982. She was among a group of courageous women who appeared before the genocide tribunal to describe not only the destruction of their families, their homes, their livelihoods, but their sexual assault by soldiers. See the court’s ruling, pp. 516-17.

In light of the 2013 ruling and the extraordinary personal stories of suffering and survival recounted by Ixil witnesses during the trial, it is disturbing to recall that at the time of the Ríos Montt regime (March 23, 1982 – August 8, 1983), the United States refused to acknowledge the role of the Guatemalan Army in the widespread killing of civilians. Instead, the administration – and President Reagan himself –  championed the Guatemalan leader and sought to lift the sanctions imposed by Congress barring US military assistance to Guatemala because of the atrocities committed by the Army.

At the time of the 1982 coup that brought Gen. Efraín Ríos Montt to power, the Reagan administration was fighting a covert war against the Nicaraguan Sandinista regime and in need of allies in Central America who would support the anti-Sandinista contras. The overthrow of the reviled President Romeo Lucas García provided a welcome opening for Washington to reestablish ties with Guatemala and bolster US strategic goals in the region. Reagan officials were eager to embrace the country’s new leader; as a memo to President Reagan from his Secretary of State, George Shultz, said before Reagan and Ríos met for the first time, “The coup which brought Ríos Montt to power on March 23 presents us with an opportunity to break the long freeze in our relations with Guatemala and to help prevent an extremist takeover.” (Document 11)

Breaking the freeze proved to be more difficult than expected. Although U.S. officials repeatedly asserted to the press, in congressional hearings, and in their own secret internal communications that Ríos Montt had made tremendous strides in “human rights reforms,” international human rights groups were just as insistent about the Guatemalan military’s role in repeated brutal massacres in the country’s rural and predominantly Mayan regions.

Despite the public outcry, US diplomatic, military and intelligence officers in Guatemala and Washington perceived Ríos Montt and reported on his government in ways that served US interests. The declassified documents from 1982 described Ríos Montt as a leader who brought the Army under control, quelled the growing insurgent threat, and curbed human rights violations. If Lucas García was routinely characterized by US officials as a butcher, Ríos Montt was a democratic reformist, using legal tactics to fight a brutal insurgency.[1]  As the CIA analyzed, “Reporting from [multiple sources] indicates that human rights violations by the Guatemalan Government – widespread and chronic under former President Lucas – have decreased substantially to the point where discriminate violence (that is, targeting guerrillas) has replaced indiscriminate slaughter since Ríos Montt came to power.” (Document 15; emphasis added)

The bias in reporting is clearest in US accounts of the massacres. Although evidence of atrocities committed by the Army reached the United States from human rights groups, humanitarian and refugee organizations, the Church, US Congress, foreign and national media, survivors and eyewitness accounts – and was noted in US reports – the US Embassy in Guatemala and officials in Washington were deeply skeptical. In some cases, US Ambassador Frederic Chapin and his political officers, officials of the CIA station in Guatemala and defense attachés posted in country called the alleged massacres inventions of disinformation and guerrilla propaganda. In almost all other cases, with some exceptions, United States officials blamed the guerrilla forces as the perpetrators of the mass killings.

This trend in US reporting bias from that period was directly contradicted by the conclusions of the exhaustive study of the Commission for Historical Clarification (Comisión para el Esclarecimiento Histórico—CEH), published in February 1999. The CEH found that the Guatemalan State, through operations carried out by the Army and paramilitary forces, was responsible for 93% of the human rights violations registered by CEH investigators; the guerrillas were responsible for 3% of the violations.[2] The CEH concluded that the Armed Forces committed “acts of genocide” in four regions of the country, targeting distinct ethnic groups, between 1980-83; for many of the genocidal acts documented by the commission, the periods of greatest intensity occurred during the Ríos Montt government.[3]

An analysis of the sources used by the United States to obtain the majority of its information on the massacres demonstrates that the most common were the Army, the Guatemalan press, Presidential Public Relations Secretary Francisco Bianchi, Sub-secretary Rafael Escobar Arguello, and civilians speaking in the presence of Guatemalan State officials (Document 14). Documents describing massacres were rarely drawn from firsthand accounts by US officers who physically went to the sites and conducted inspections personally.[4]

In late August, US Ambassador Frederic Chapin wrote, “The guerrillas have waged a sustained and indiscriminate campaign of terror, arson, intimidation, kidnapping, mayhem, bombing, disinformation and murder.” (Document 10) The State Department accepted the Embassy claims at first. An analysis produced in the same month observed that, “Human rights violations by Guatemalan security forces have decreased substantially over the past four months…During the same period, killings of civilians by the insurgent forces have reached unprecedented levels. The improvement in the human rights situation can be credited to the efforts of President Efraín Ríos Montt…” Although State Department analysts acknowledged that Army gains against insurgents were marred by “widespread allegations of atrocities by the troops…the Embassy does not as yet believe that there is sufficient evidence to link government troops to any of the reported massacres.” (Document 6)

By the end of 1982, however, the State Department was beginning to have doubts about the quality of the intelligence information and analysis reaching Washington from Guatemala. On November 23, in a highly unusual critique of its own Embassy, the State Department’s Bureau of Human Rights and Humanitarian Affairs questioned the credibility of US reporting on the human rights crisis in Guatemala. The secret, “eyes only” (highly classified) memorandum was prompted by intelligence obtained from the US Embassy regarding a massacre of civilians and other violations committed in and around Choatalum, Chimaltenango in late 1982. Having sent several cables discounting the veracity of the reports, Embassy officials suddenly reversed themselves after speaking with several eyewitnesses and an unnamed trusted source who confirmed that the Army had been responsible for the violence.

The Embassy’s contradictory accounts prompted the Bureau of Human Rights to review “most of the important cable traffic from Guatemala since March 23.” The Bureau’s analysis focused, in particular, on the sources of Embassy reporting and concluded that “Almost all of the Embassy early responses to charges of Army massacres were based primarily on asking the Army whether or not they were true.” Judging from the information reaching Washington, the State Department observed, “Our Embassy does not really know who is responsible for the killings in rural Guatemala.” Despite mounting evidence of the military’s involvement in violence, the memorandum concluded, the Embassy “has not reported in any cable a single instance that it believes was done by the Army.” (Document 12; emphasis in the original)

By the end of the Ríos Montt regime, the Embassy was producing more critical assessments of the Army’s role in human rights violations under Ríos Montt’s leadership, in part under pressure from the State Department internally, and in part because of evidence the Embassy obtained of the military’s role in the assassination of a Guatemalan employed by the US Agency for International Development (AID).

On August 8, 1983, General Oscar Mejía Víctores took power in a military coup. By that time the CIA was conceding in a wide-ranging assessment of the Ríos Montt regime that “The Army used extreme violence against guerrilla-controlled villages during last year’s counterinsurgency offensive.” (Document 15)

Just ten days after Ríos Montt’s conviction for genocide in 2013, the Guatemala Constitutional Court – under tremendous pressure from the country’s political right, retired military officers, and private sector – vacated the ruling for technical (not constitutional) reasons and ordered a new trial. Following repeated delays and appeals filed by Ríos Montt’s lawyers, the case was reopened in 2017. This time the trial would take place behind closed doors and without the presence of the press or public. Ríos Montt was said to be ill, even demented; he was wheeled to the proceedings on a stretcher from his detention under house arrest. On April 1st of this year, Efraín Ríos Montt died at 91 years of age, and the second genocide trial abruptly came to an end.

THE VERDICT, by Skylight.

500 YEARS tells the epic story that led Guatemala to a tipping point in their history, from the genocide trial of former dictator General Rios Montt to the popular movement that toppled sitting President Otto Perez Molina. Focusing on universal themes of justice, racism, power and corruption, 500 YEARS tells the story from the perspective of the majority indigenous Mayan population, and their struggles in their country’s growing fight against impunity. 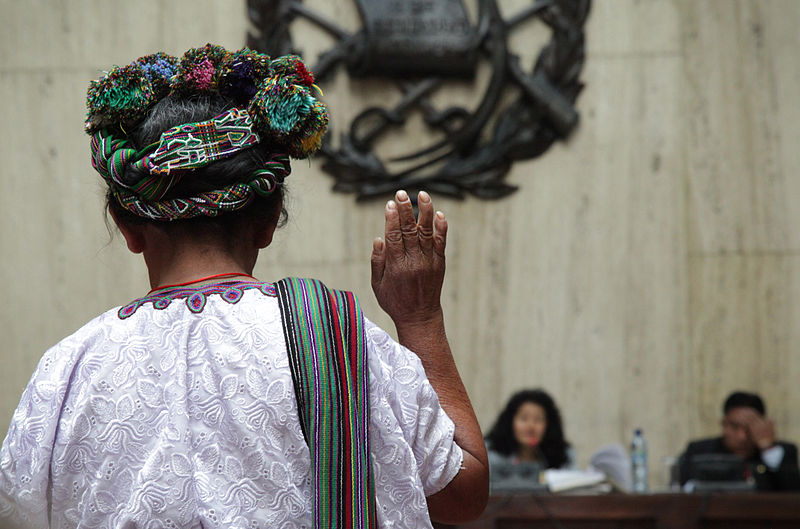 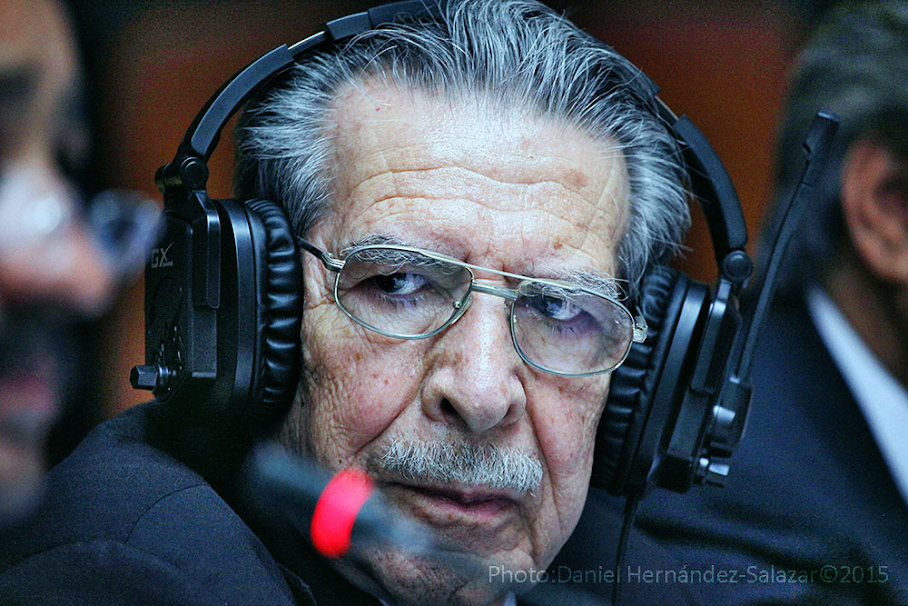 Efraín Ríos Montt listens during his trial on charges of genocide and crimes against humanity (Photo: © Daniel Hernández-Salazar) 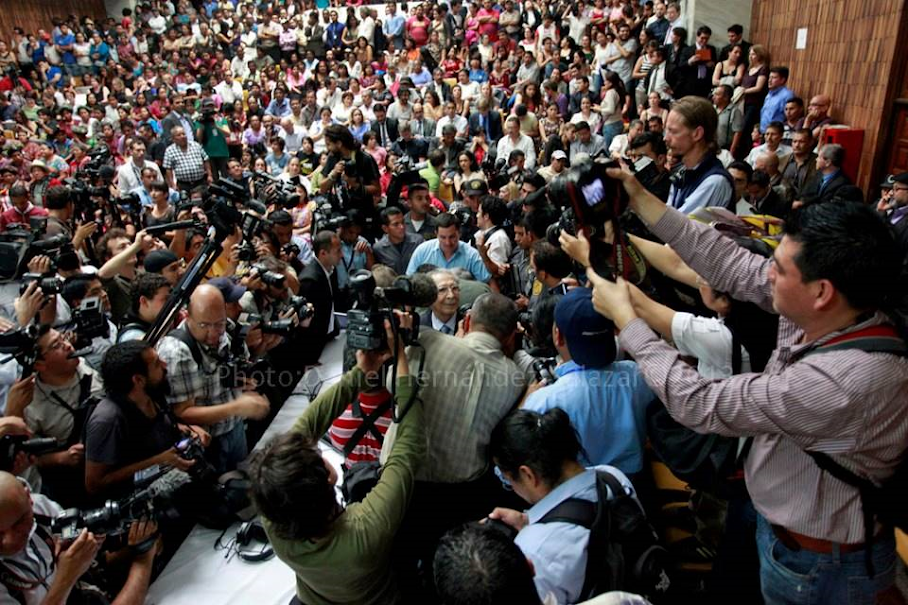 The Guatemala courtroom moments after the verdict against Ríos Montt was announced​, May 10, 2013  (Photo: © Daniel Hernández-Salazar) 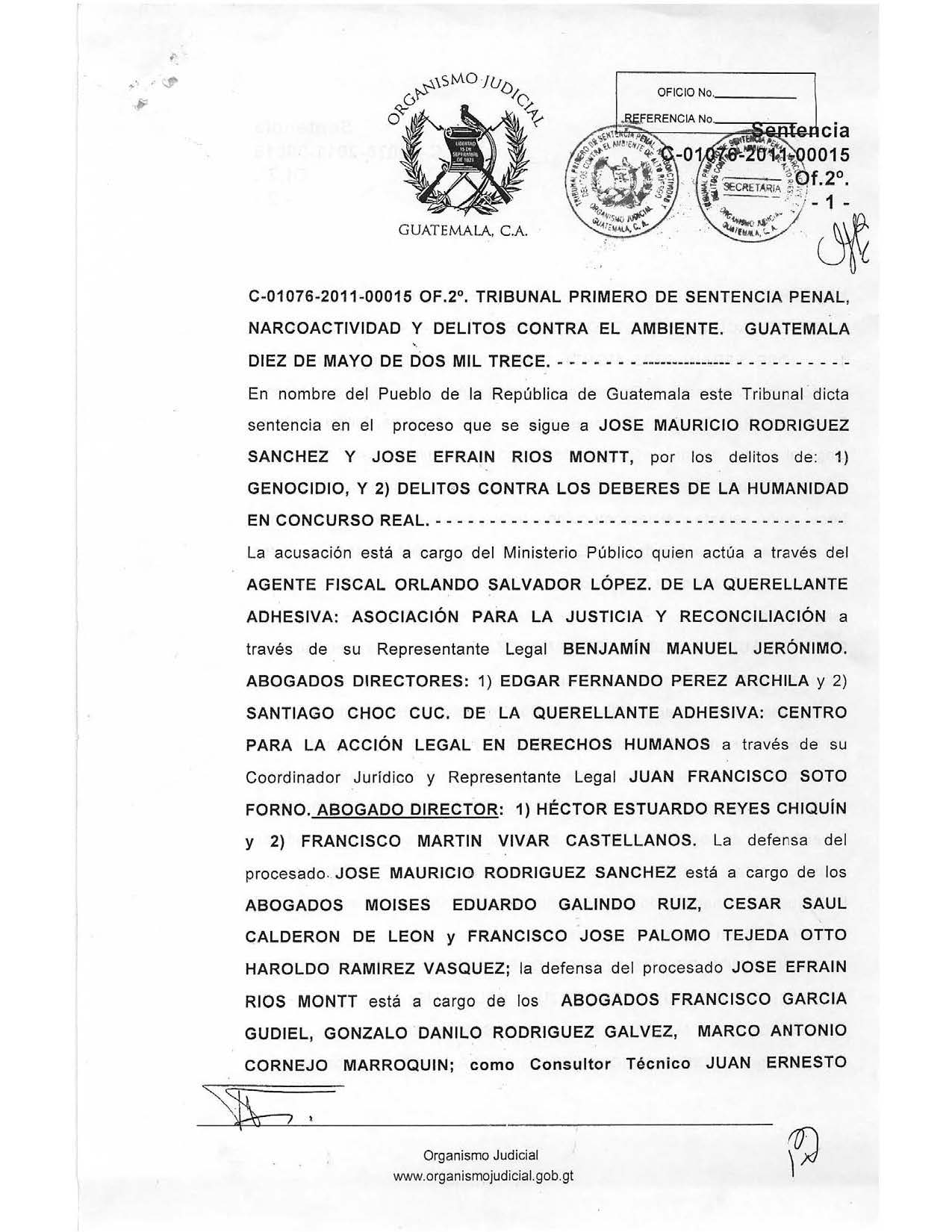 [1] After meeting Ríos Montt at a conference of regional heads of state in Honduras in late 1982, President Ronald Reagan said famously the Guatemalan leader was “totally dedicated to democracy,” calling him “a man of great personal integrity and commitment.” See press release of December 4, 1982, preserved by The American Presidency Project.

[4] See Document 12, in which a State Department analysis of US reporting on the massacres observed, “We have not done very many such inspections. I was directly asked by [a US government colleague]… exactly how many on-site inspections Embassy Guatemala has carried out. I don’t know the answer, but suspect it might be embarrassing.”