Kissinger Told Soviet Envoy during 1973 Arab-Israeli War: “My Nightmare is a Victory for Either Side” – The Soviet Agreed

Only days after the outbreak of the October War and not long after his confirmation as Secretary of State, Kissinger at one of his first press conferences, on 12 October 1973. During this event, he declared that the Soviet Union airlift of supplies to the Arab countries had been “moderate,” a statement that Senator Henry Jackson (D-WA) criticized. (National Archives, Still Picture Unit, Record Group 59-BP, box 35, envelope VS 1053-73 Secy’s Press Conf)
Published: Aug 9, 2019
Briefing Book #680

New Kissinger Telcons Shed Light on U.S. Policy during the War as Well as Nixon's Nomination of Gerald Ford for Vice President

Nixon Described Ford to HAK as a “Bright Truman”

Posting Comes on Anniversary of Nixon's Resignation in 1974

In one record about the Yom Kippur War, the secretary of state candidly tells Soviet envoy Anatoly Dobrynin it would be a “nightmare” if either side won.  In another, the president comments that Gerald Ford, who would soon be named vice president, was a “safe” choice, reminding Nixon of a “bright Truman.”  That telcon consisted of a somewhat disjointed conversation with the president that prompted Kissinger to confide in his deputy later that the “President was loaded.”

During the Arab-Israeli War in October 1973, Secretary of State Henry Kissinger had frequent discussions with Soviet Ambassador Anatoly Dobrynin. During a conversation on 18 October 1973, after he agreed that the military situation was stable, even stalemated, Kissinger declared that “my nightmare is a victory for either side.” Dobrynin observed: “it is not only your nightmare.” Kissinger would say different things to different interlocuters, but he may have worried that if either Egypt or Israel attained a decisive military advantage it would weaken U.S. influence over post-war peace talks. Dobrynin likely had the same concern for the Soviet position.

A conversation with President Richard Nixon sheds light on Nixon’s decision to choose Congressman Gerald Ford (R-MI) as vice president to replace Spiro Agnew who had just resigned owing to corruption charges. Nixon told Kissinger that the top candidates were Ford, former Secretary of State William Rogers, former Treasury Secretary John Connolly, and California Governor Ronald Reagan. Dismissing Reagan as a possibility, Kissinger suggested someone, unlike Connolly or New York Governor Nelson Rockefeller, who would not be a “presidential candidate” in 1976. Nixon and Kissinger agreed that Ford would not be “the candidate” in 1976, with Nixon characterizing him as “safe”, and a “bright Truman.”

Both of these recently declassified telephone conversation transcripts were previously unknown. Found in a collection of Kissinger material in State Department records at the National Archives, they were declassified in response to an October 2000 request by the National Security Archive. Other Kissinger telephone conversations in this release were with White House Chief of Staff Alexander Haig, Secretary of Defense James Schlesinger, and White House counsel Leonard Garment.

The discussions covered by these telcons occurred during the 1973 Middle East War and a major topic was U.S. policy to supply Israel with arms and ammunition.  The coordinated Egyptian-Syrian attack on 6 October 1973 against Israeli forces in the Sinai and the Golan Heights had come as a shock to Washington.  A State Department intelligence analyst had estimated the possibility of war months earlier and U.S. intelligence had picked up warning signs in the weeks before, but the Nixon administration was relatively complacent.  Never considering the possibility that Egyptian President Anwar Sadat would launch war to force negotiations, Kissinger and his Israeli counterparts believed that they could control the pace of diplomacy over territory occupied during the 1967 war. At a staff meetiong on 23 October, State Department analyst Ray Cline captured some of the reasons for pre-war complacency when he observed that "we were brainwashed by the Israelis, who brainwashed themselves.”[1]

When the war broke out, Nixon and Kissinger wanted to make sure that Israel did not lose, but they favored a low profile for the U.S. role, so as not to anger Arab countries that were already suspicious of U.S. policy. Moreover, Kissinger wanted to calibrate supply availabilities to influence Israeli war aims. The telcons from 13 October 1973 are especially revealing because they illustrate Kissinger’s suspicion that the Pentagon was “sabotaging” supply operations, which could risk putting “the whole goddamn strategy out of whack.” After Nixon decided in favor of a large-scale U.S. airlift of supplies, Kissinger told Leonard Garment that “we are going to wind up with the Arabs mad.”

The National Archives released these telcons from a collection “The Records of Henry A. Kissinger,” found in State Department records at the  Archives.  It is essentially a collection of document copies, with (to the best of the editor’s recollection) no original typed copies.  Some of the documents are marked with chapter numbers suggesting that the papers had something to do with the preparation of Henry Kissinger’s memoirs.  The telcons found there are also copies, some of them poorly reproduced second or third generation versions of the originals.

Copies of these telcons cannot be found in the otherwise comprehensive Kissinger telcon collection at the Richard Nixon Presidential Library and Museum (a copy of the originals in Kissinger’s Library of Congress collection), which the National Archives secured from Kissinger's papers as a result of legal action threatened by the National Security Archive.  The absence of the telcons from the records at the Nixon Library (or even the Library of Congress) may have been a clerical oversight or a deliberate decision,  but at least copies are available.  This may not be the case for Kissinger’s records of his meetings with Soviet Ambassador Dobrynin during 1973-1976, which to date are nowhere to be found, despite the efforts of State Department historians to locate them.

The Department of State made no objection to declassifying the new telcons, but the Department of Defense excised three of them, one of them extensively (the Nixon-Kissinger telcon). The Pentagon’s justification for the redactions is exemption 3.3 (b) (6) in Executive Order 13526: that disclosure would “reveal information, including foreign government information, that would cause serious harm to relations between the United States and a foreign government, or to ongoing diplomatic activities of the United States.”

It is not clear why the Defense Department leadership believes that its declassification reviewers have special skills compared to State Department professionals for determining which information could harm U.S. diplomacy; nevertheless, they have used exemption 6 frequently when reviewing State Department records at the National Archives, even from even the early 1960s. It is equally mysterious why Pentagon reviewers suppose that declassification of Nixon’s or Kissinger’s statements from 1973 could actually cause damage today , but the National Security Archive routinely challenges such claims in administrative appeals to the National Archives and the Department of Defense.

*  The editor thanks Melissa Lew Heddon, an archivist at the Nixon Presidential Library and Museum, for her kind help in checking the documents in this posting against the Library's collection of Henry Kissinger telcons. Alexander Chang, a student at George Washington University, helped with transcriptions. 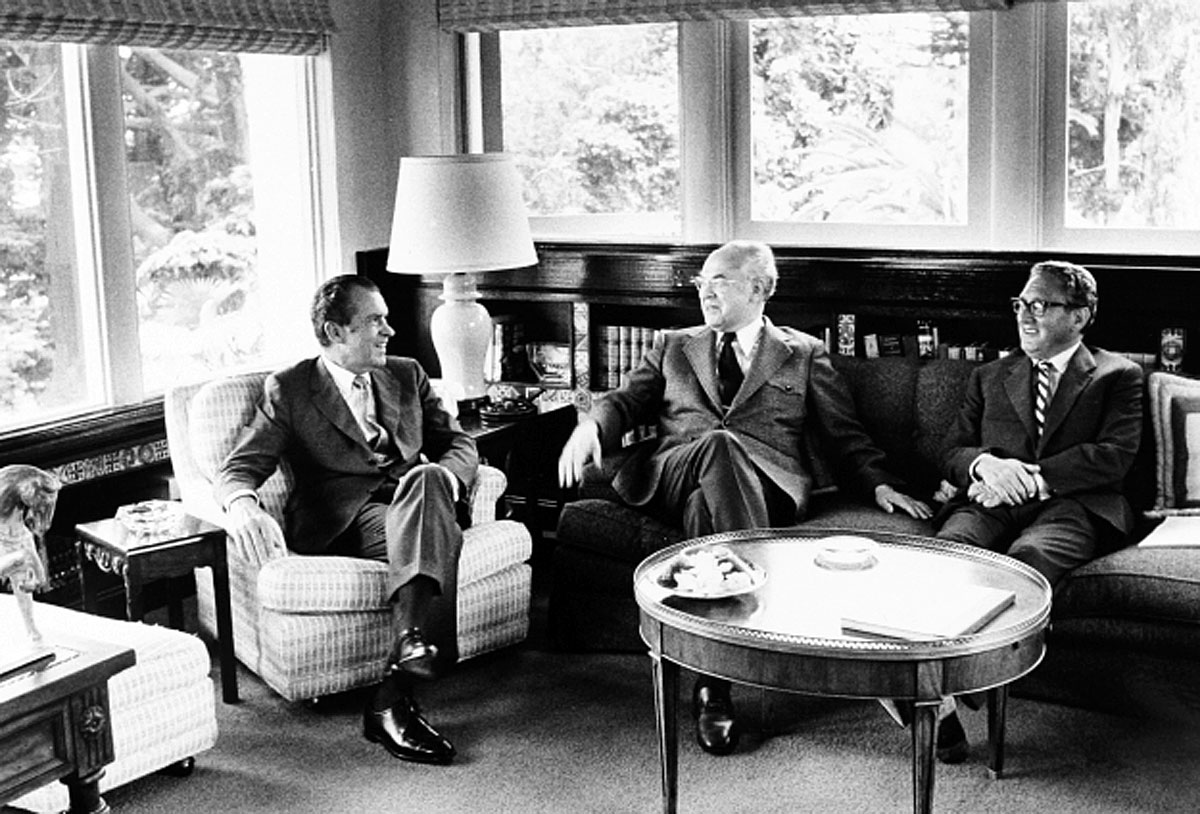 Nixon, Dobrynin, and Kissinger at Camp David in 1973. Source: NPMP

[4]. A copy of this telcon is probably in the papers of some former official because Walter Isaacson had access to it and quoted several sentences in Kissinger: A Biography (New York: Simon & Shuster, 1992), at page 521.

[6]. “Remarks of Ambassador Victor Israelyan,” in Richard Parker, The October War: A Retrospective (Gainesville: University Press of Florida), 219-222. Israelyan recalled that he and his colleagues “favored putting strong pressure on Sadat,” but the Soviet leadership ignored the advice.

[7]. Kissinger later argued that it was necessary to get the Israelis to “sign on to [that] principle so we could use it against them if they turned the war around.” Isaacson, Kissinger, 515.