U.S. sought to preserve close ties to Indonesian military as it terrorized East Timor in runup to 1999 independence referendum

Police in the capital of Dili, East Timor, assault a civilian who had urged them to intervene to stop a violent confrontation between a government-backed militia and pro-independence supporters, August 26, 1999.  Immediately after this photo was taken by Time Magazine photographer John Stanmeyer, the officers shot and killed the man. (Photo credit: John Stanmeyer, Time Magazine; posted on Iconic Photos)

U.S. knew of Indonesian military’s creation, direction, and arming of militias in East Timor in 1998-1999, plans to “kill, drive out, or intimidate into silence independence activists” prior to historic vote 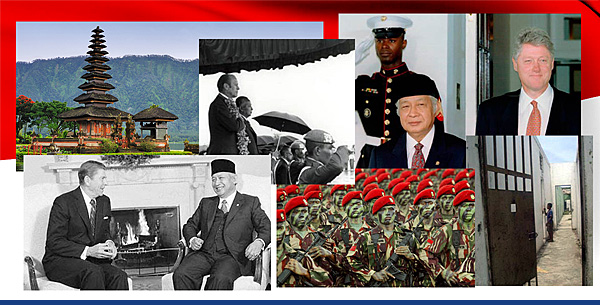 Geoffrey Robinson
“If You Leave Us Here, We Will Die:” How Genocide Was Stopped in East Timor
Princeton University Press, 2009.

A Quarter Century of U.S. Support for Occupation
November 28, 2005

Washington, D.C., August 28, 2019 – The U.S. government was aware for months that the Indonesian military had created, and was arming and directing paramilitary militias in East Timor in the leadup to the territory’s historic August 30, 1999, independence referendum, according to recently declassified documents posted today by the National Security Archive based at The George Washington University.  The documents provide an unprecedented window into U.S. policymaking and reporting in the aftermath of the May 1998 resignation of Indonesian President Suharto; the unexpected decision of President B.J. Habibie in January 1999 to suggest that East Timor would be allowed to vote on its political future after 24 years of Indonesian military occupation; the negotiations which led to the formation of the United Nations mission in East Timor (UNAMET); the months-long campaign waged by the Indonesian armed forces and its militia proxies in East Timor to terrorize the population and prevent it from voting for independence; and the systematic campaign of murder and destruction carried out by the Indonesian armed forces and its militia proxies in the wake of the referendum.

The U.S. Embassy in Jakarta, State Department, Defense Intelligence Agency, Central Intelligence Agency, Pacific Command, and Defense Department all closely monitored events in East Timor during 1999 and produced hundreds of updates and reports on the events there, which had wide-ranging implications for Indonesia’s democratic transition, the role of the Indonesian armed forces, and events in other parts of the archipelago, such as Aceh and West Papua, where the military also faced independence movements which sought to capitalize on the resignation of Suharto. The records published here are highlights of more than 200 documents from 1999 obtained through declassification requests to the U.S. government by the nongovernmental National Security Archive, and which can be made available to journalists, scholars, and others by contacting Indonesia and East Timor project director Brad Simpson.

The newly released documents add to the significant declassified record on U.S.-Indonesia relations, which includes important materials the National Security Archive has posted on topics such as Indonesia’s occupation of East Timor and regime human rights abuses dating back to the mid-1960s (see links in left column).

Twenty years after East Timor’s historic August 30, 1999, referendum on independence, the National Security Archive published formerly classified documents detailing U.S. policy toward Indonesia and East Timor in the year leading up to the vote; the Clinton Administration’s determination to preserve military ties to the Indonesian armed forces in the face of opposition from Congress, human rights groups, and U.S. embassy personnel; the administration’s early awareness of Indonesian military determination to thwart an independence vote in East Timor through terror and violence; and the muted US attempts to convince Indonesian officials to allow a fair vote to proceed.

Indonesia invaded the former Portuguese colony of East Timor in December 1975, a year-and-a-half after the April 1974 collapse of the António de Oliveira Salazar dictatorship in Portugal. Indonesian officials decided in the fall of 1974 to incorporate Timor, through political subversion if possible, and through force if necessary, launching a covert operation (code-named Komodo) to this end, whose activities increased in intensity as the depth of Timorese support for independence became apparent.

The U.S. government knew nearly a year in advance of Indonesian plans to invade East Timor but viewed the territory as insignificant and its incorporation by Indonesia an inevitable outcome. National Security Council staffer W.R. Smyser recommended to Secretary of State Henry Kissinger “a general policy of silence,” arguing “that we have considerable interests in Indonesia and none in Timor.”[1] When Indonesian President Suharto visited Washington in July 1974 he raised his concerns about Timor with President Gerald R. Ford, who expressed sympathy for Indonesia’s position.[2] A month later, Indonesia helped provoke a civil war in East Timor, hoping that the small pro-integration party APODETI would prevail. However, the Revolutionary Front of Independent East Timor (Fretilin), emerged victorious and sought to accelerate the timetable for independence, which it declared in late November, amidst a small-scale covert Indonesian invasion of the territory.  Fretilin’s “unilateral declaration of independence,” or UDI, convinced Suharto to approve a full-scale attack on East Timor, delayed only by the visit of President Ford and Secretary of State Kissinger on December 6, where they explicitly approved of the Indonesian invasion, which began the next morning as they departed.[3]

The Indonesian invasion was a bloody and brutal affair. Indonesian officials anticipated that they would quickly establish control over the territory, but Timorese guerillas quickly retreated to the mountains where they established and maintained a dogged insurgency that would last for the next 24 years. The Ford Administration resolutely backed Indonesia, whose military forces were almost wholly US supplied and trained, and increased military aid in the aftermath of the invasion of East Timor. The U.S. government also blocked the United Nations from taking effective action against Jakarta and tacitly approved its illegal annexation of East Timor in May 1976, even as evidence mounted that Indonesian forces were committing atrocities on a massive scale. The Carter, Reagan, Bush, and Clinton Administrations continued to pursue close diplomatic and military ties with Indonesia, resisting efforts by congressional and human rights critics to condition or reduce military assistance to the Suharto regime or to pressure it to withdraw from East Timor.

Between 1975 and 1983, according to the U.N.-sponsored Truth Commission for East Timor (http://www.chegareport.net/), between 106,000 and 180,000 Timorese died from massacre, starvation, and disease attributable to Indonesia’s invasion and occupation. While only Australia legally recognized Indonesia’s formal May 1976 annexation of East Timor, most Western countries, including the United States and Britain, informally recognized Indonesia’s control of the territory. Indonesia maintained a heavy military presence in the territory and ruthlessly repressed opposition to its occupation, which included a November 1991 massacre of at least 271 unarmed Timorese civilians in the capital of Dili by Indonesian army units using U.S.-supplied weapons.

As domestic opposition to Suharto grew in the mid-1990s, so too did opposition to Indonesia’s continued occupation of East Timor by a growing network of human rights groups, parliamentarians, exiled Timorese, and Indonesian pro-democracy forces. In 1996 two East Timorese were awarded the Nobel Peace Prize for their nonviolent resistance to the Indonesian occupation, increasing international pressure on Jakarta to find a peaceful solution to the long-simmering conflict.

When mass protests forced Suharto’s resignation in May 1998, East Timor’s resistance movement began mobilizing to demand a vote on self-determination. Indonesian military and intelligence officials responded by organizing and arming violent local militias to terrorize pro-independence supporters. Indonesian military forces and their militia proxies killed hundreds and displaced thousands between May 1998 and May 1999, a development closely monitored by U.S. officials, who still prioritized the maintenance of close military ties with Jakarta.

In January 1999 Suharto’s civilian successor, B.J. Habibie, unexpectedly announced that Indonesia would work with the United Nations to organize a referendum in which East Timor could choose between “special autonomy” within Indonesia or independence. Indonesian military officials were bitterly opposed to giving up East Timor, and immediately began organizing a terror campaign to derail the vote, initially scheduled for early August and later delayed until August 30, 1999.  In June the United Nations Mission in East Timor began registering East Timorese to vote and organizing the referendum, a process monitored by international human rights groups and solidarity activists.

U.S. officials closely documented the widening Indonesian terror campaign in the months leading up to the referendum, worried that violence in East Timor would destabilize Indonesia itself and embolden congressional and human rights critics, whose calls for an end to U.S. military training, arms sales, and military aid had grown louder since 1998. U.S. Embassy and intelligence agencies noted overwhelming evidence of direct Indonesian military involvement in militia violence, and some State Department officials pressed their Indonesian counterparts to rein in the terror and allow a free vote in East Timor. But U.S. military officials resisted efforts to pressure the Indonesian armed forces and opposed efforts to reduce military aid, convinced that the Indonesian military remained a crucial force for political and military stability in the archipelago during a fragile democratic transition.

On August 30, 1999, more than 98 percent of eligible East Timorese cast ballots to determine their political future. A few days later U.N. officials announced the results: over 78 percent of East Timorese rejected Indonesia’s autonomy proposal and opted for independence. In retaliation, Indonesian military and police forces and their local paramilitary allies launched a scorched earth campaign, killing more than 1,500 Timorese, displacing nearly half the population, including more than 100,000 forced across the border into neighboring West Timor, and razing much of East Timor to the ground. President Bill Clinton suspended military relations with Indonesia on September 9, 1999, in response to events in East Timor, pressure from U.S. NATO allies, human rights groups, and Congress, which had already voted almost unanimously to suspend all military aid to Indonesia.  Global outrage finally forced Habibie to accept an Australian-led U.N. peacekeeping mission in late September.

The documents published here were released as a result of Freedom of Information Act (FOIA) requests filed by the author and the National Security Archive between 2002 and 2007. They comprise a substantial portion of the daily reporting on East Timor of the U.S. Embassy in Indonesia and U.S. intelligence agencies from late 1998 through September 1999. Many of the documents contain substantial redactions on claimed “national security,” or B(1), exemptions to the FOIA, and Archive appeals for the release of more information have thus far been unsuccessful. Many documents, especially from the CIA, were withheld in their entirety. There are thus many questions that these documents cannot currently answer, particularly about the extent of U.S. knowledge of Indonesian military contingency plans in August and September 1999 to destroy East Timor. The documents nevertheless provide a valuable contemporary record of events in East Timor and of internal U.S. policy deliberations during the period. 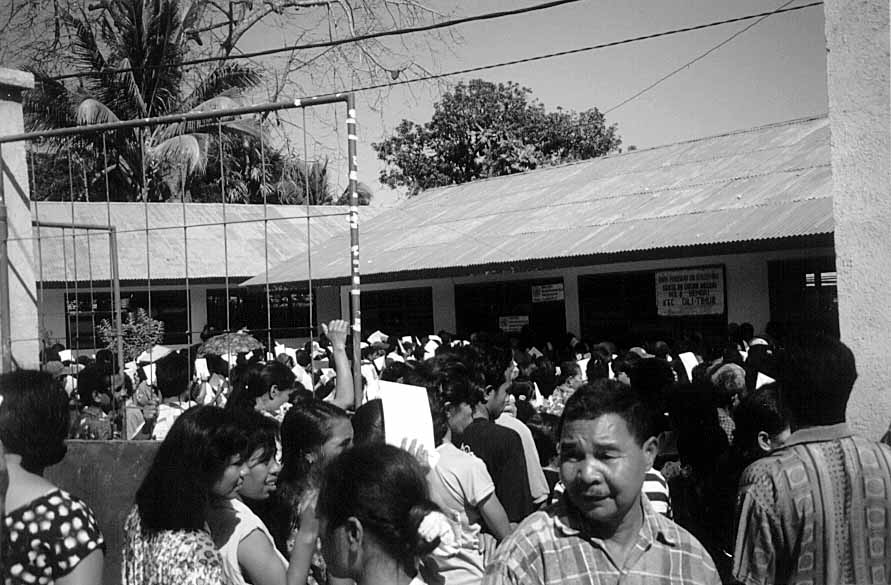 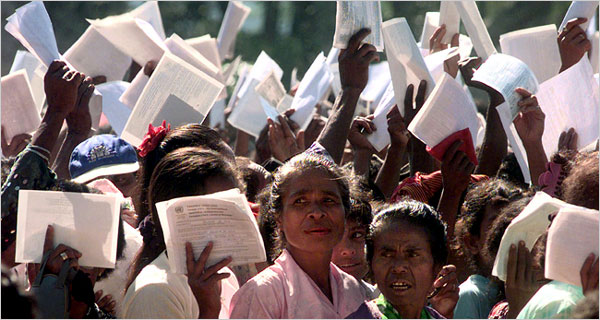 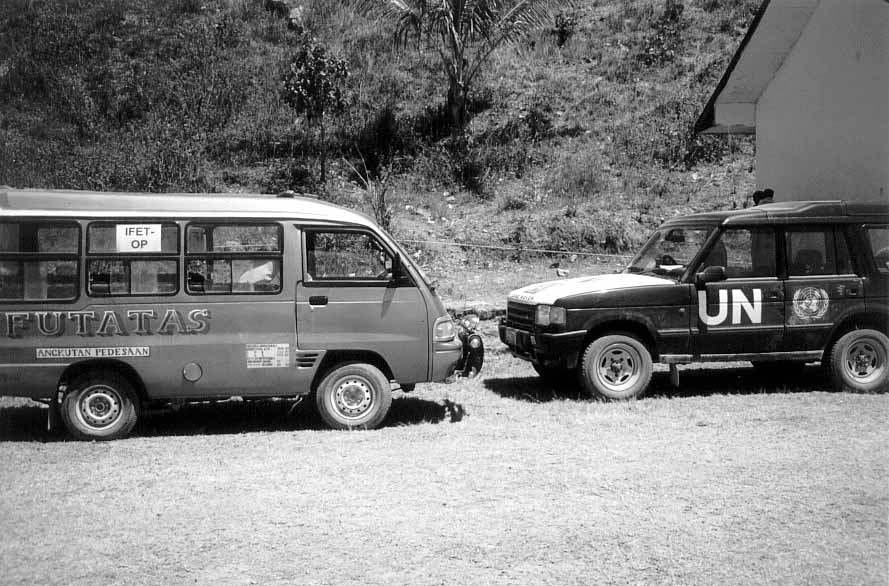 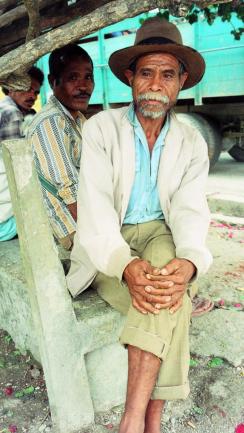 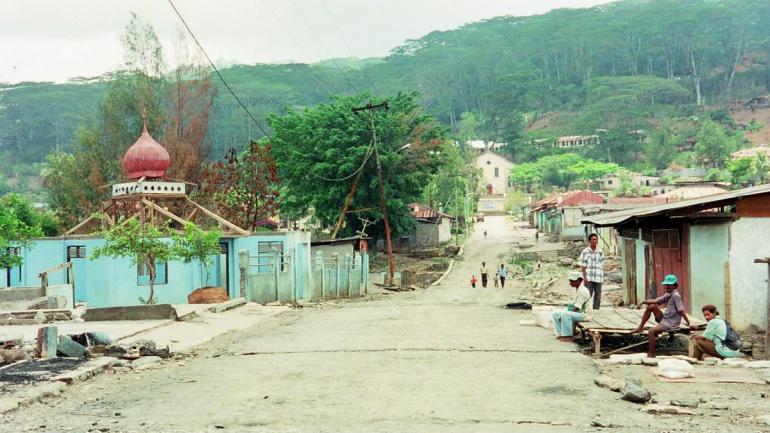 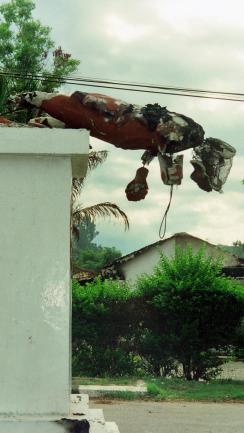 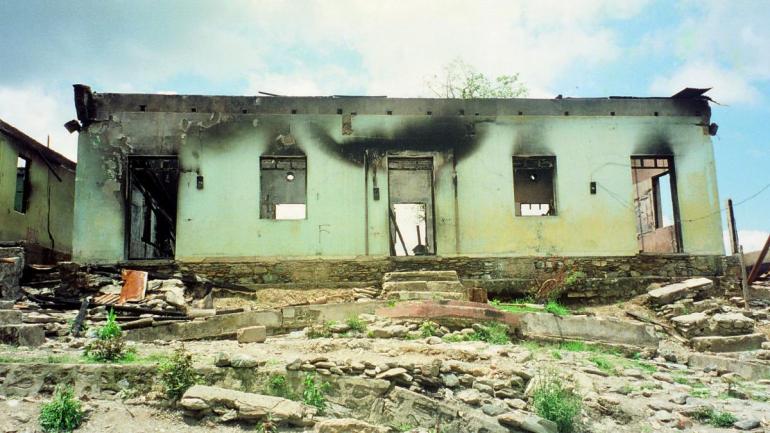 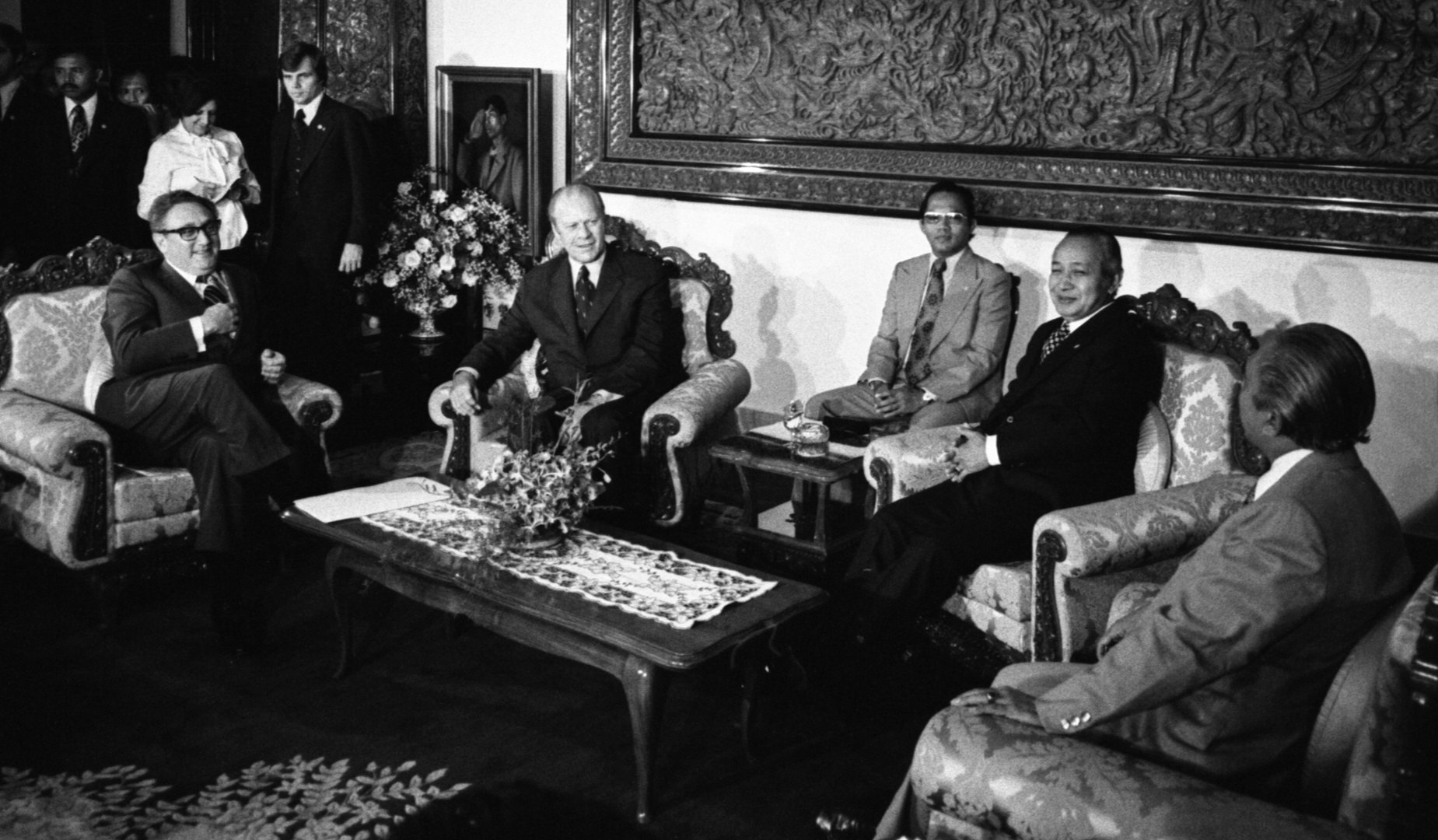