Communist Parades as an Intelligence Target in the Cold War

How the U.S. Spied on the Soviet Military in Broad Daylight

Spies and Shuttles: NASA's Secret Relationships with the DoD and CIA
By James E. David, University Press of Florida
January 27, 2015 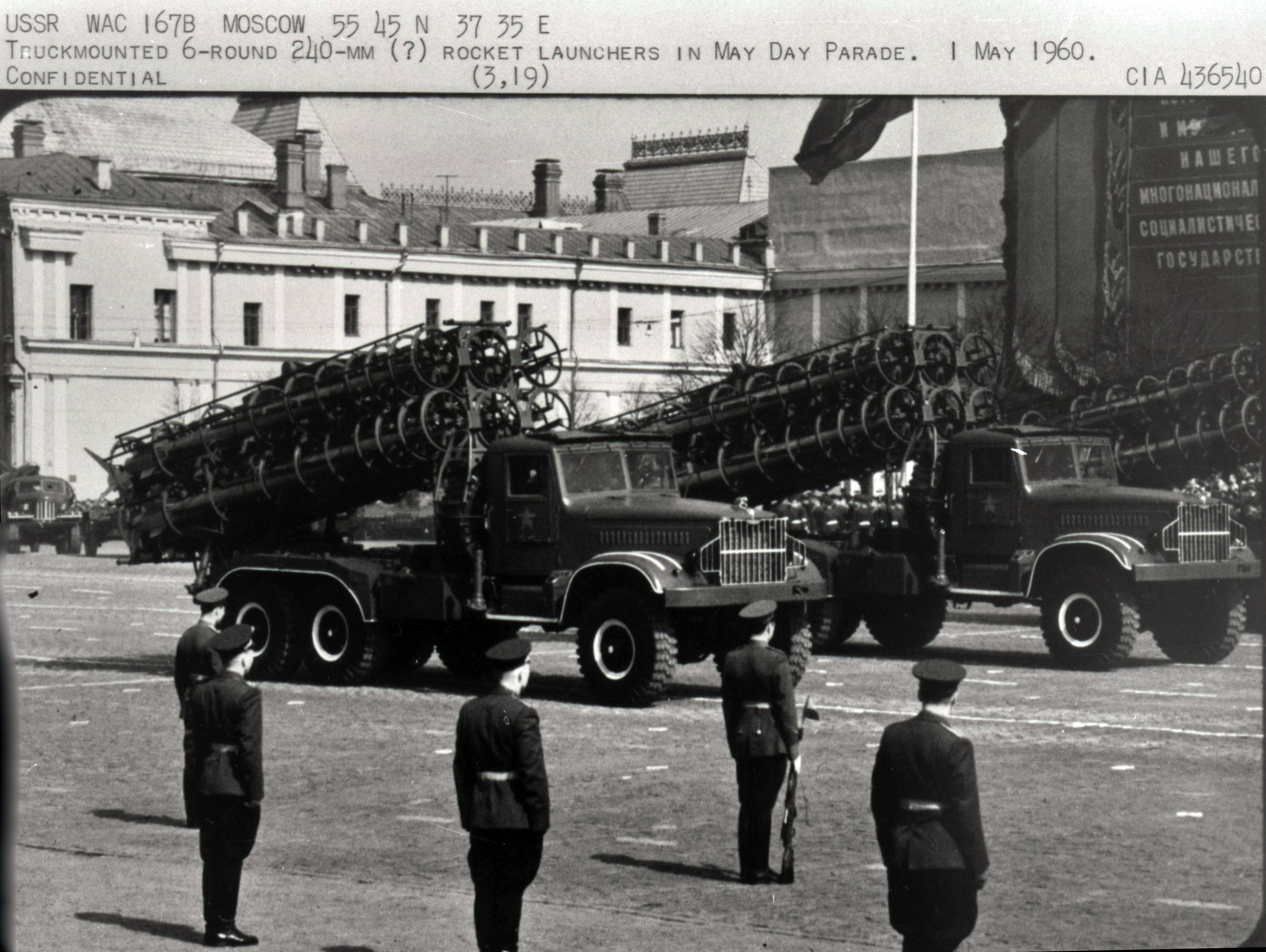 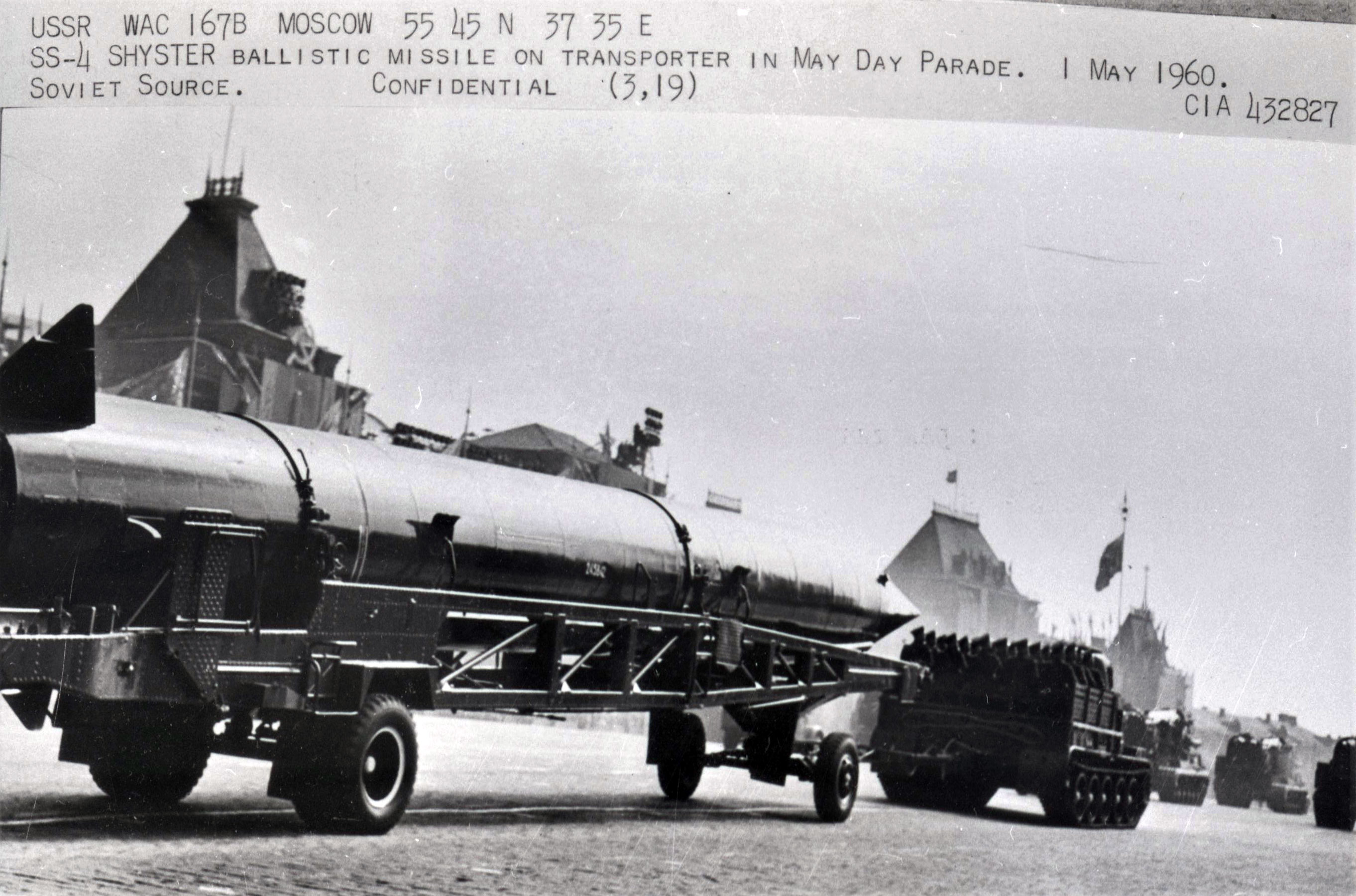 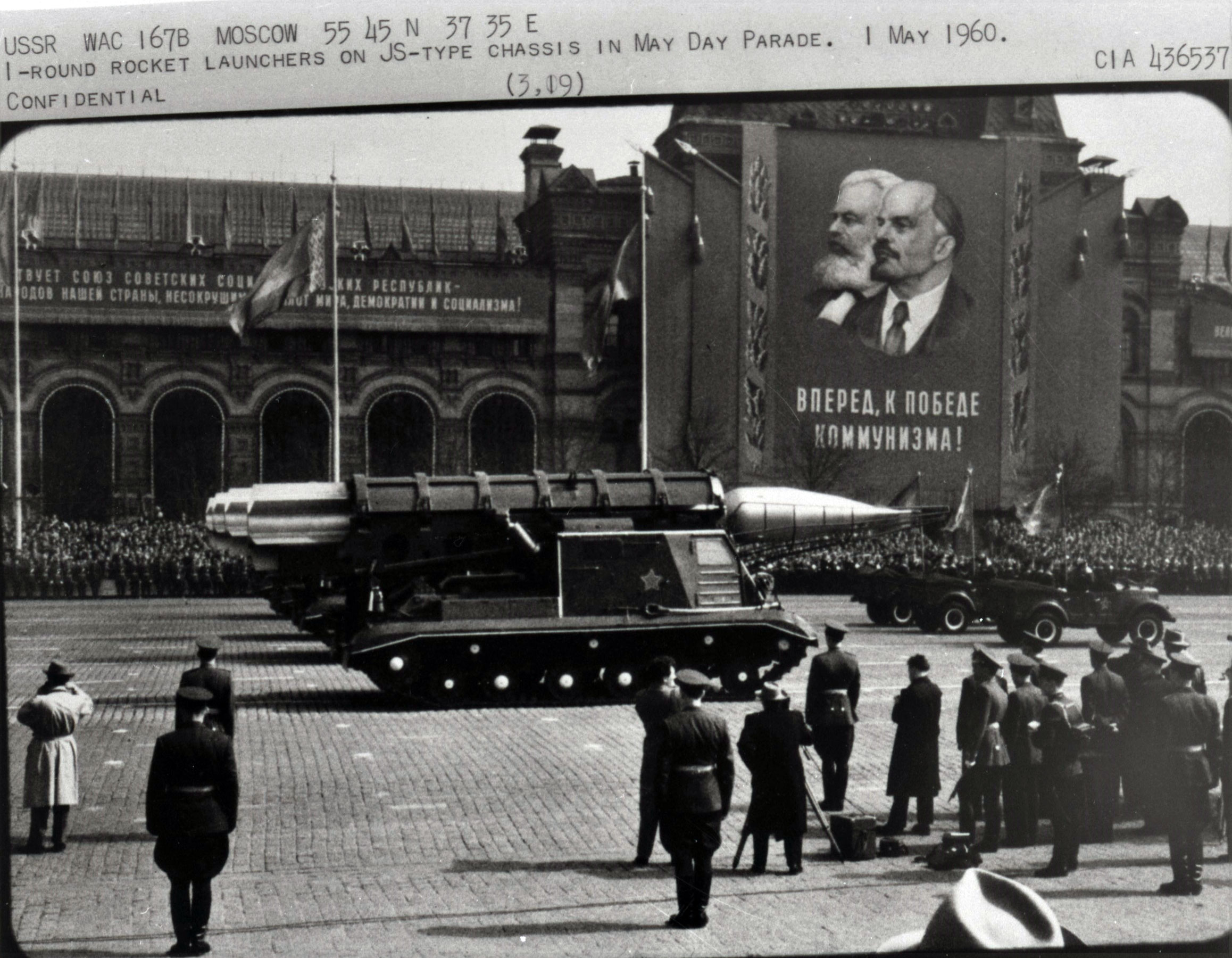 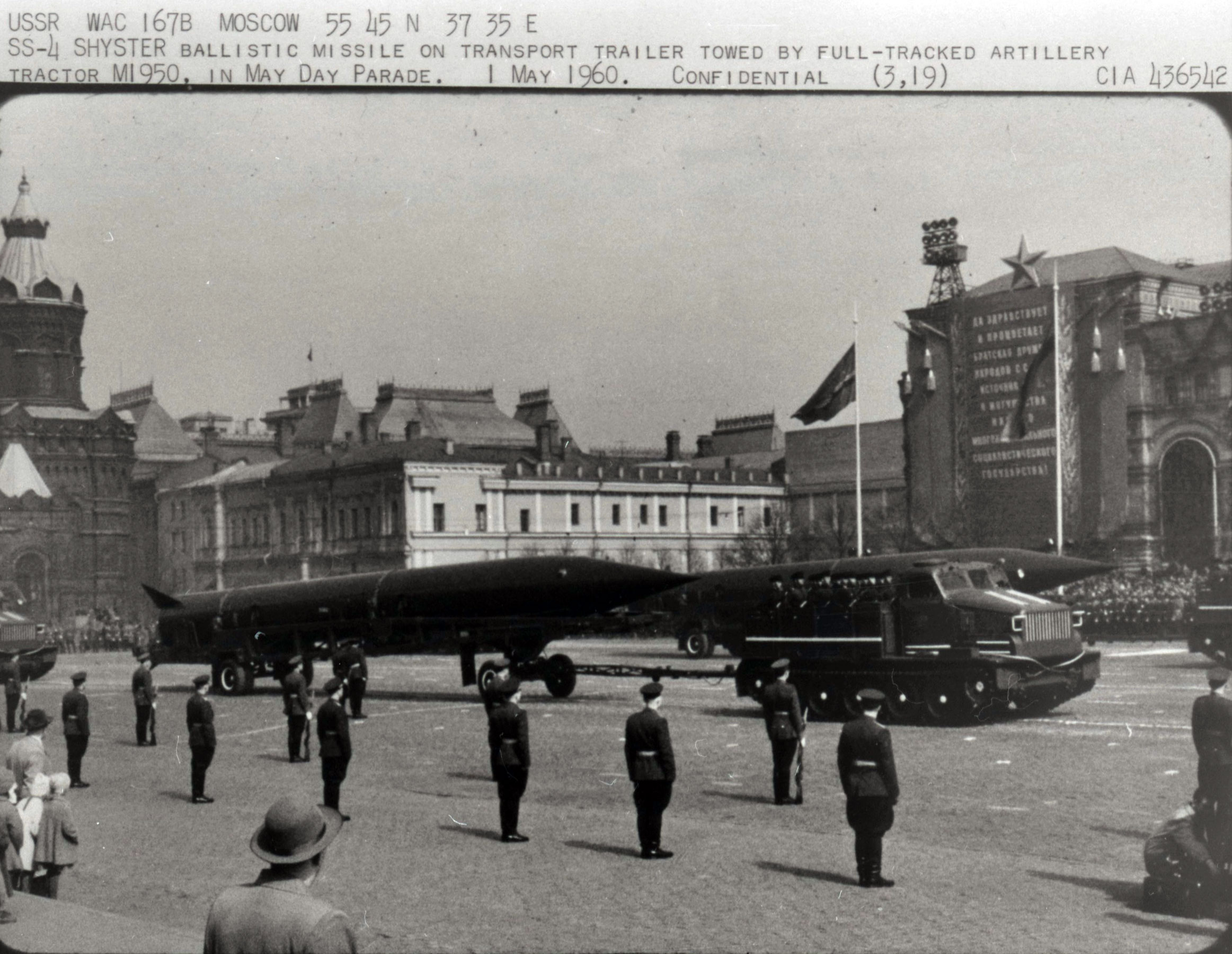 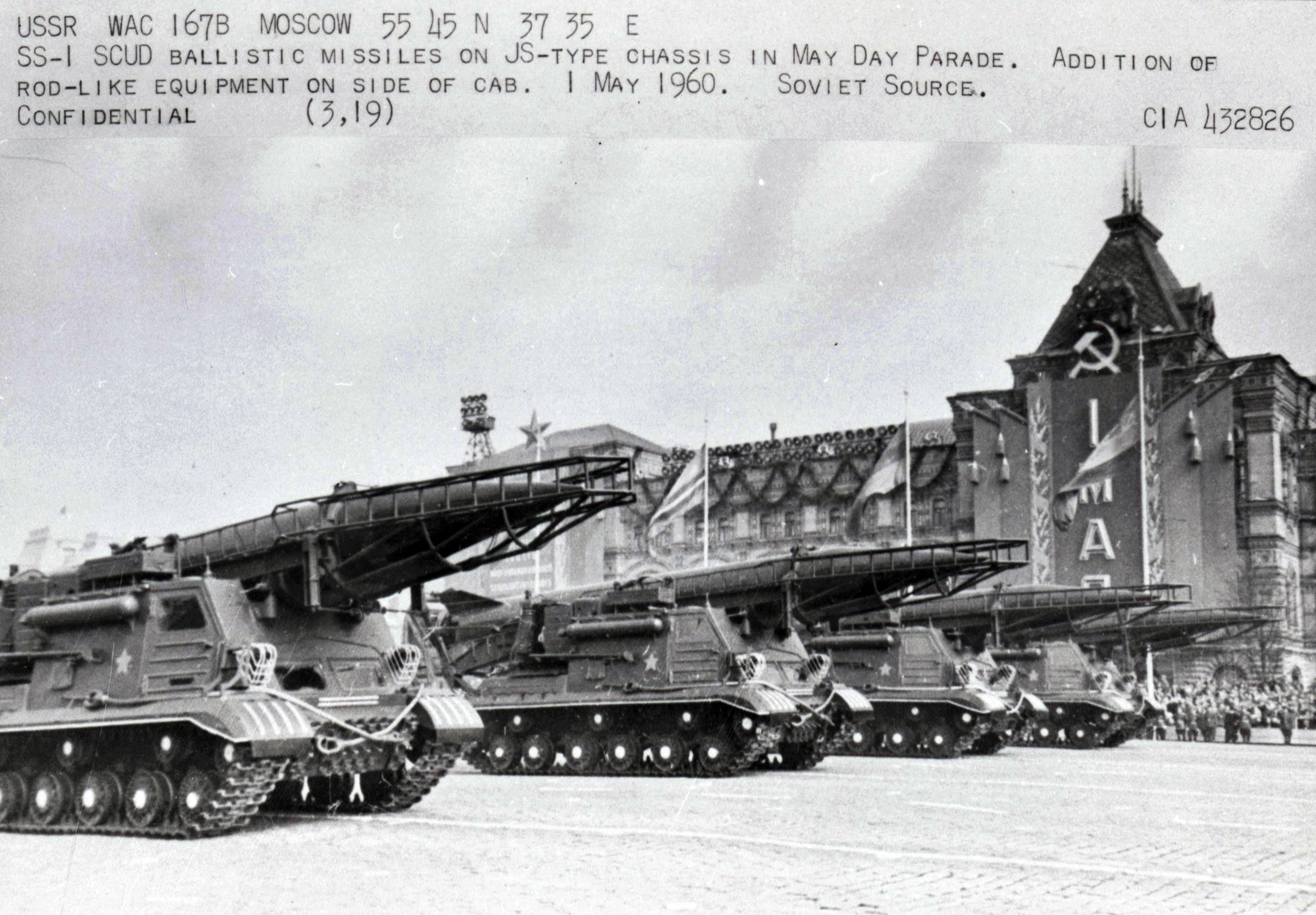 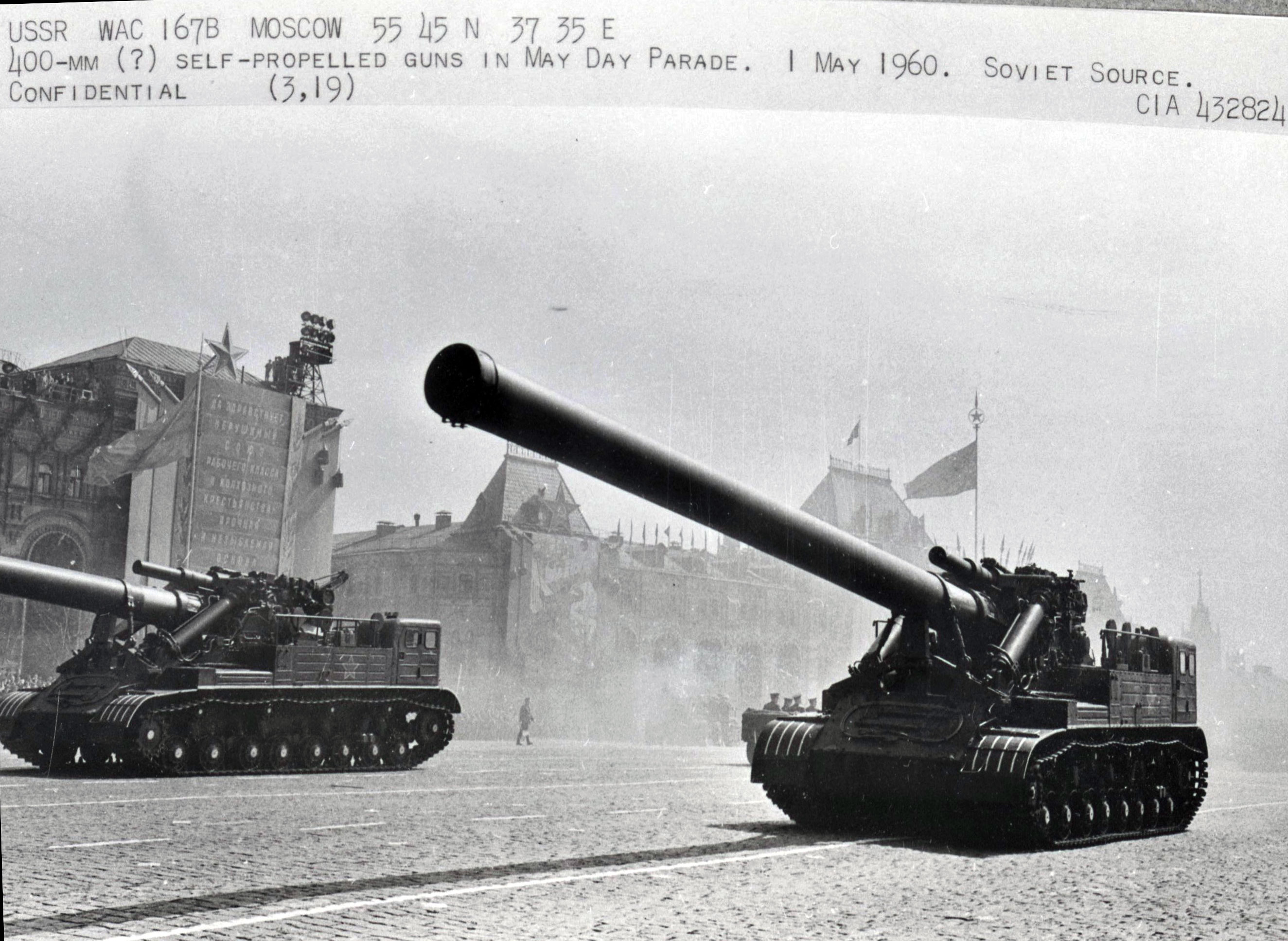 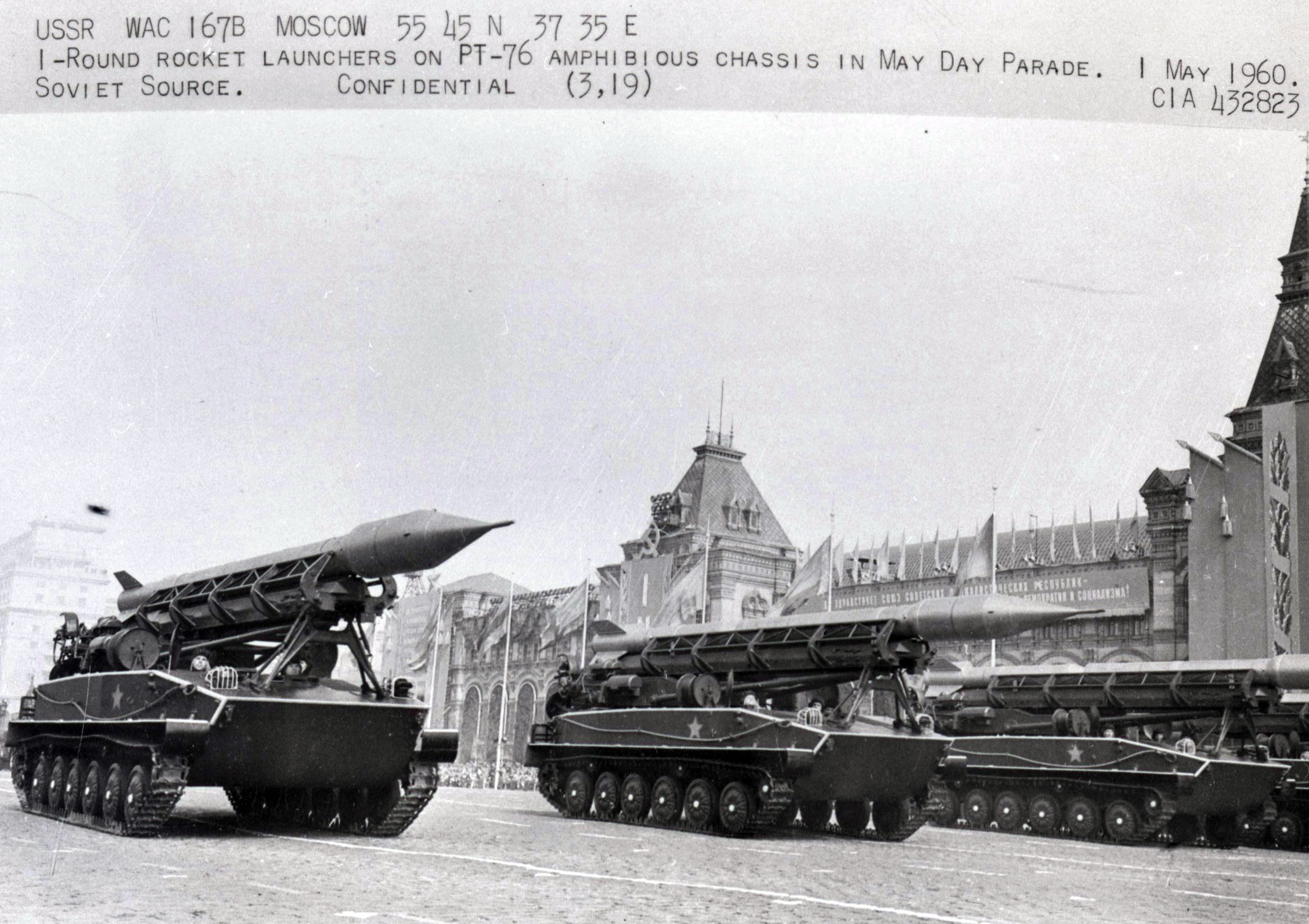 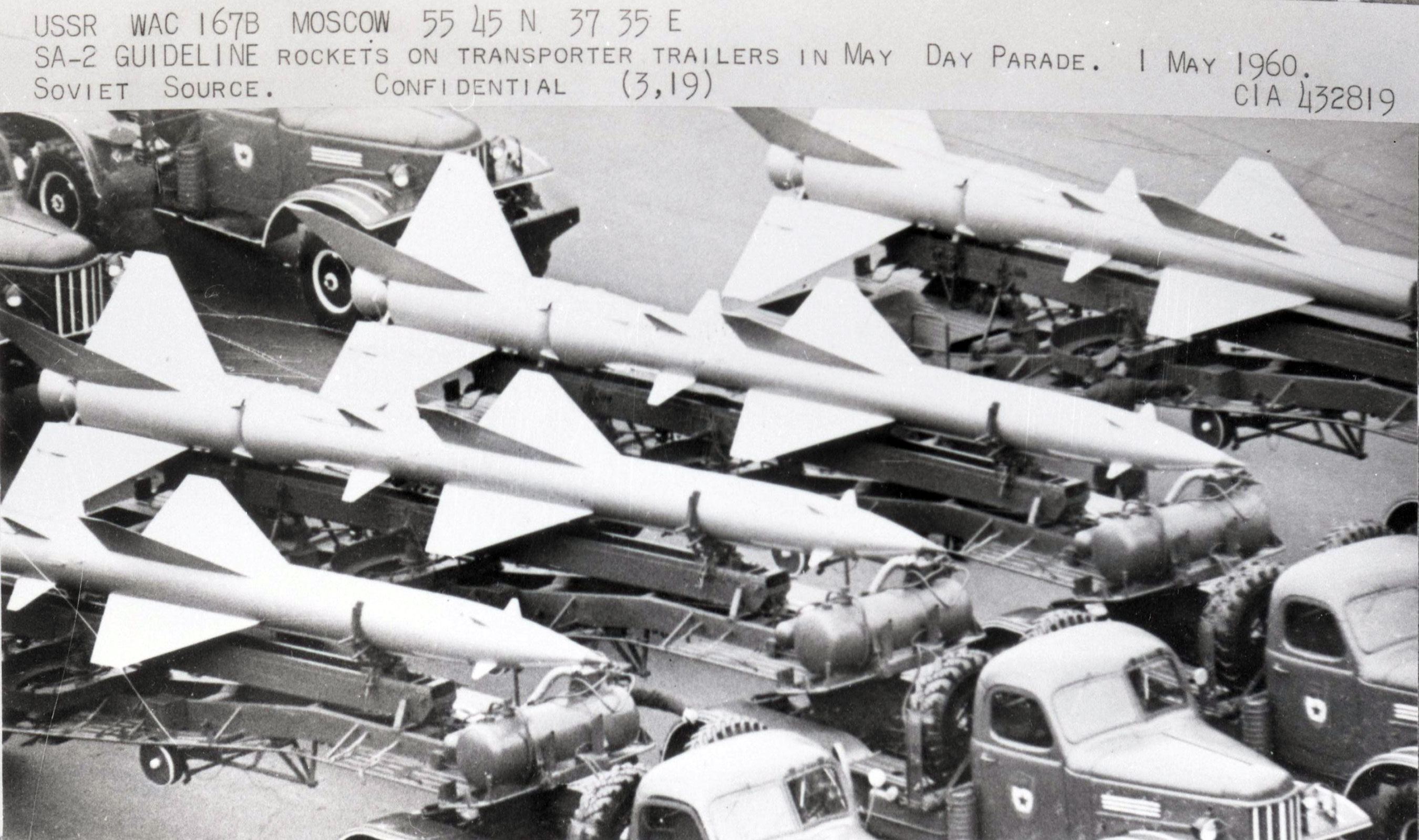 Washington, D.C., December 17, 2018 – During the dark days of the Cold War, spying on the enemy often took place in broad daylight.  Some of the best opportunities for Western intelligence to get a picture – literally – of Soviet capabilities were presented by the USSR itself at public military parades, where the normally secretive Soviets proudly showed off to the world their arsenal of advanced hardware.

High-resolution photography from overflights, satellites, and even handheld cameras enabled the West to take accurate measurements and gather important details of various components.  Additionally, identification of the participating military units contributed to order of battle intelligence.  The presence of officials on the reviewing stand, their interactions, and speeches shed light on the nation’s political and military leadership, data coveted by Kremlinologists in the West.

Todays’ posting by the National Security Archive, based at The George Washington University, features documents from the Central Intelligence Agency, Defense Intelligence Agency, and U.S. Army.  It includes records concerning coverage of a variety of military parades and intelligence reports based on the imagery obtained at those events.  Many of the latter include copies of photos taken at the time.

Communist Parades as an Intelligence Target

Technical intelligence is information on the design, dimensions, configuration, and performance of weapons systems.  It is critical in establishing their exact capabilities and in determining the forces and weapons to build to counter them.  Various sources contribute to technical intelligence.  These include high-resolution overhead and ground photography, the interception and analysis of telemetry from aircraft, missiles, rockets, and spacecraft; the overt or covert acquisition and analysis of weapons systems; the acoustic, seismic, and radiological sensors of the Atomic Energy Detection System; the overt or covert acquisition of technical documents and scientific publications; and human sources.[1]

A common definition of photographic resolution is the distance two objects need to be apart to be distinguished as separate from each other.[2]  The U.S. intelligence agencies did not specifically define high-resolution, but instead determined the resolutions necessary to provide different levels of technical intelligence.   In the 1960s, they concluded that a resolution of around three feet was adequate to establish the existence and identity of targets such as major weapons systems.  A resolution of about one foot provided critical additional information on a wide range of military targets, including missiles, naval vessels, aircraft, and certain ground force equipment.[3]

Various photoreconnaissance aircraft were capable of collecting high-resolution imagery of the USSR, but there were few overflights due to their extremely provocative nature, formidable air defenses, and the massive area to be covered.  The U-2, whose B camera achieved a maximum resolution of two feet, photographed 15% of the nation during 24 successful overflights beginning in 1956.[4]  However, they ended permanently when the Soviets shot down Gary Powers’ plane in 1960.

High-resolution photoreconnaissance satellites became operational several years later.  GAMBIT-1, launched 38 times from 1963-1967, eventually achieved a best resolution of two feet.  The follow-on GAMBIT-3 flew 54 missions from 1966-1984.  Its maximum resolution remains classified, except for the fact that it was initially greater than two feet and apparently improved to better than one foot. HEXAGON, which flew 19 missions from 1971-1984, had a best resolution of two feet.[5]  The resolution obtained by KENNEN, the first digital return system initially launched in 1976, remains classified.

Although the high-resolution imagery from the U-2 and satellites satisfied many technical intelligence requirements, it rarely captured certain critical targets. These included intercontinental ballistic missiles (ICBMs) and shorter-range surface-to-surface ballistic missiles.  Even before their deployment in silos beginning in the mid-1960s, these vehicles were stored in buildings at their launch complexes.  Submarines carried their ballistic missiles (SLBMs) in tubes and their cruise missiles in protective housings.  Silos housed anti-ballistic missiles (ABMs).  The U-2 and, later, satellites, frequently photographed aircraft on runways and aprons.  However, they could not capture the underside, engine inlets, and certain other important features.  Similarly, these overhead platforms were limited in some respects in photographing armor, artillery, mobile radars, and other ground force equipment.

U.S. and allied intelligence personnel and service attachés used handheld cameras to photograph a wide range of targets during their trips in the USSR.  Intelligence agencies also acquired imagery taken by tourists and business visitors.  However, with the severe travel restrictions imposed on Westerners and the massive security around military installations these efforts did not capture many weapons.

In contrast, parade photography frequently did.  The resolutions achieved in this imagery are unknown, but the best must have been about several inches.  Annual parades included the May Day parade held on 1 May as part of the celebration of   International Workers’ Day and the October Revolution Parade held on 7 November as part of the commemoration of the Bolshevik takeover in 1917.  Although the largest parades took place in Moscow, other Soviet cities held them as well.  Moscow also occasionally hosted an air show in July that emphasized military aircraft.

It is worth pointing out that although the Soviets were notoriously skittish about opening themselves up to surveillance of any kind and, as noted, sharply restricted travel and even photography by Westerners, those concerns apparently did not outweigh a collective sense of pride and a determination to show off their military prowess to the world.  At most they occasionally used canisters when displaying missiles for the first time, such as the GALOSH in the November 1965 parade.  However, in later years they would display the missiles themselves in the open.

The following photos with captions are scans of 2” x 2” negatives from a CIA ground photo collection located in Record Group 263 at the National Archives. They were obtained by James E. David. The collection has about 1.5 million photos covering 1900-1980 and was reviewed for declassification around 2000. Roughly 40 percent of the collection remains classified, including some parade photos. 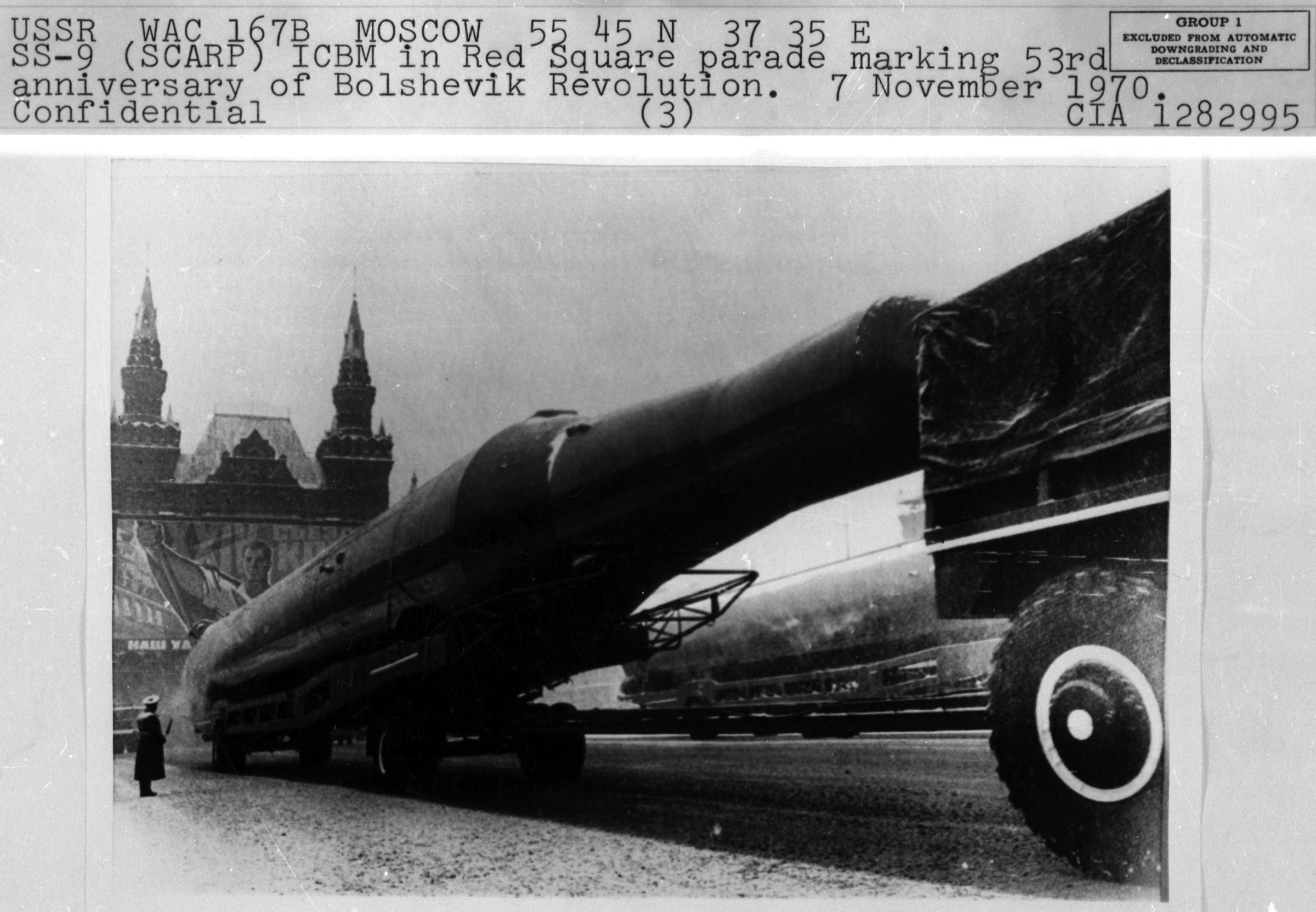 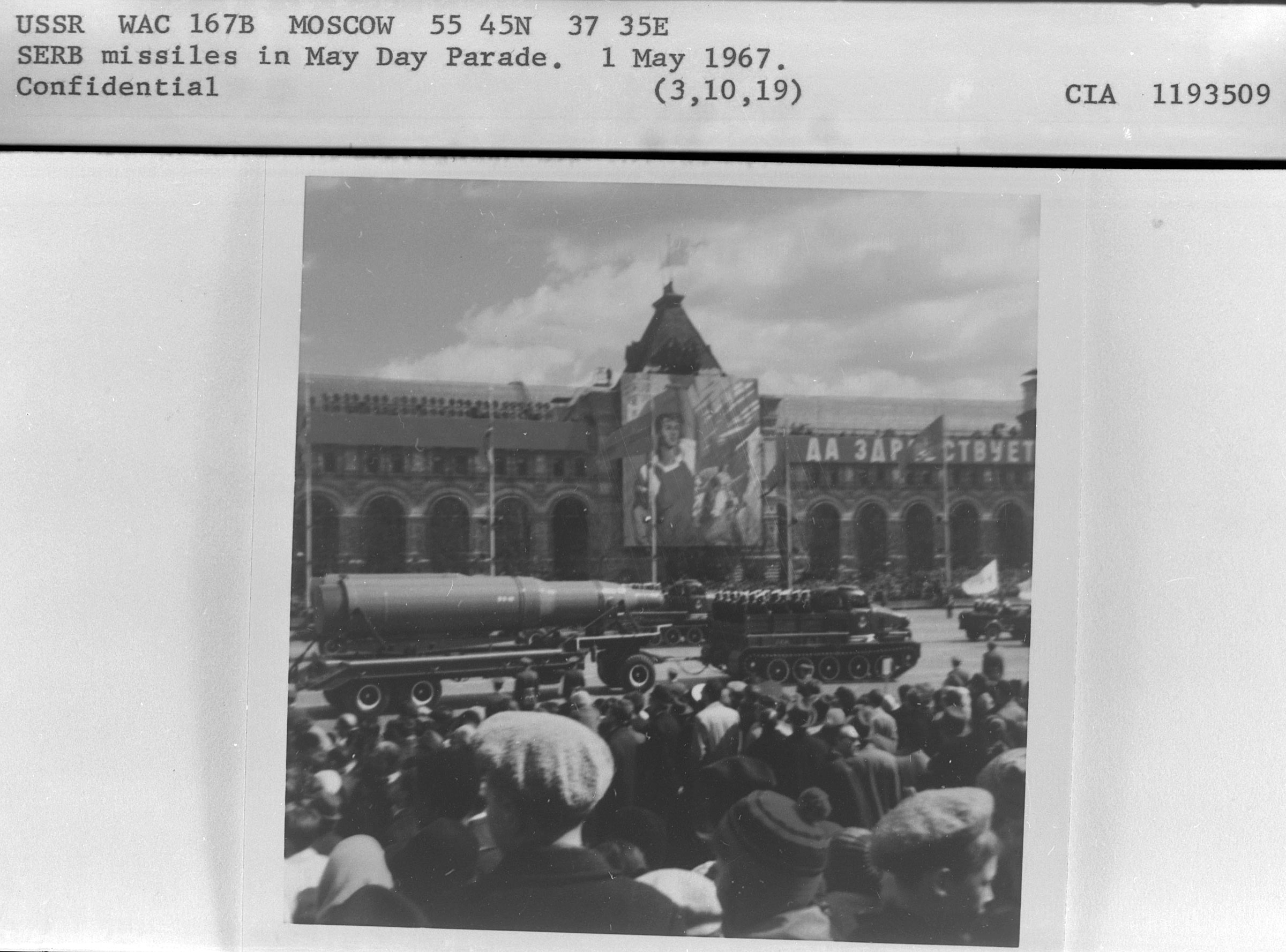 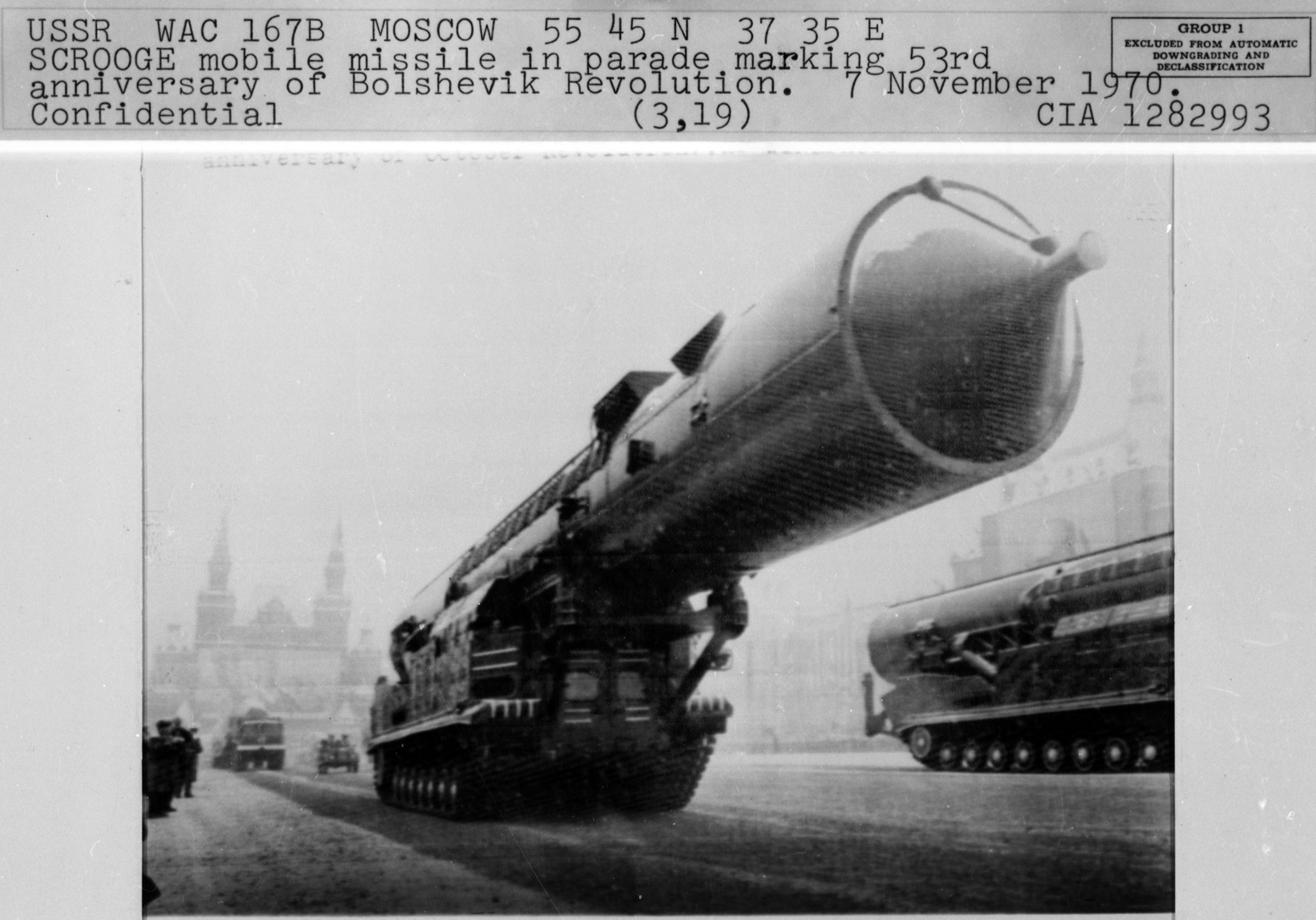 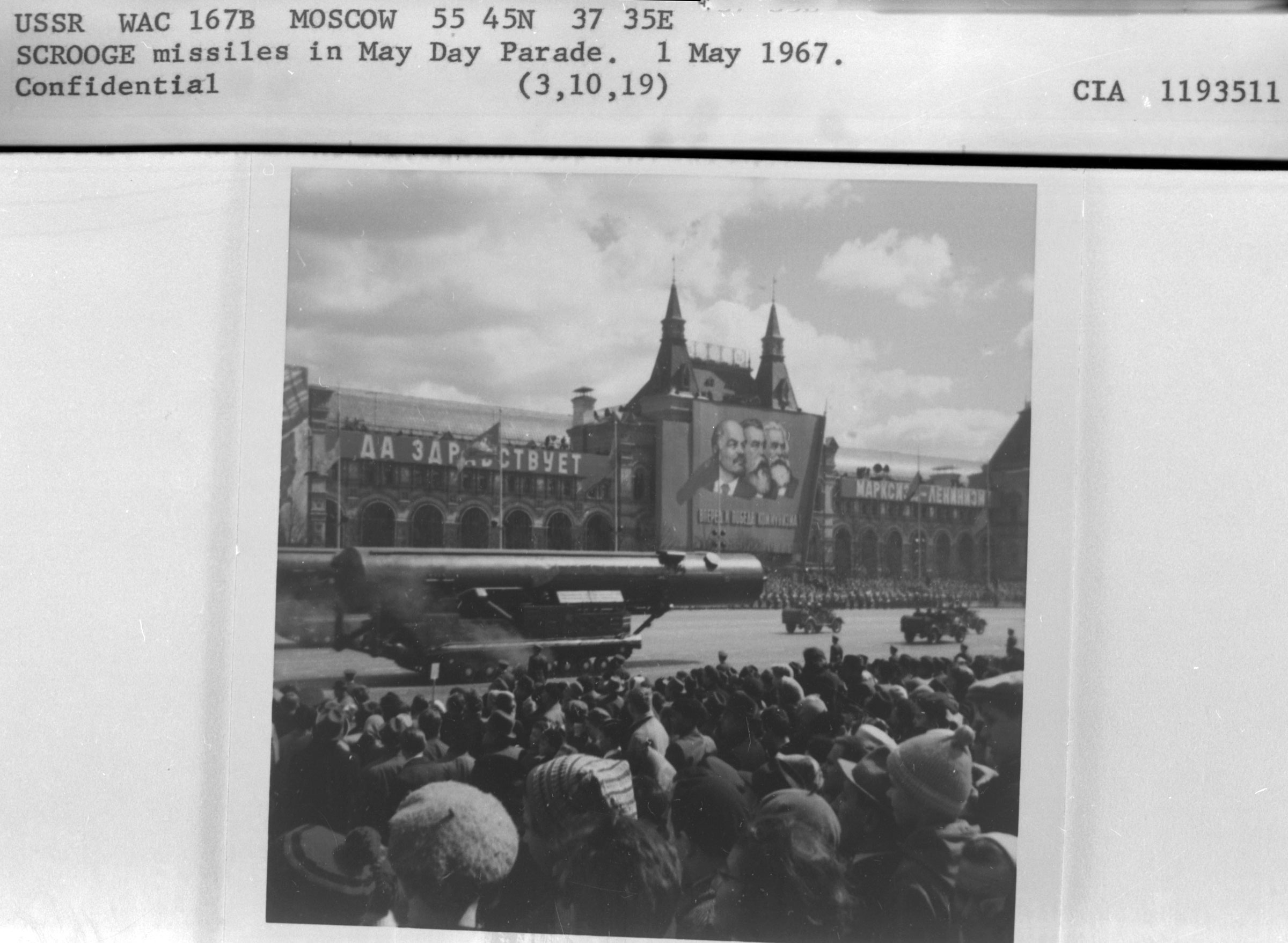 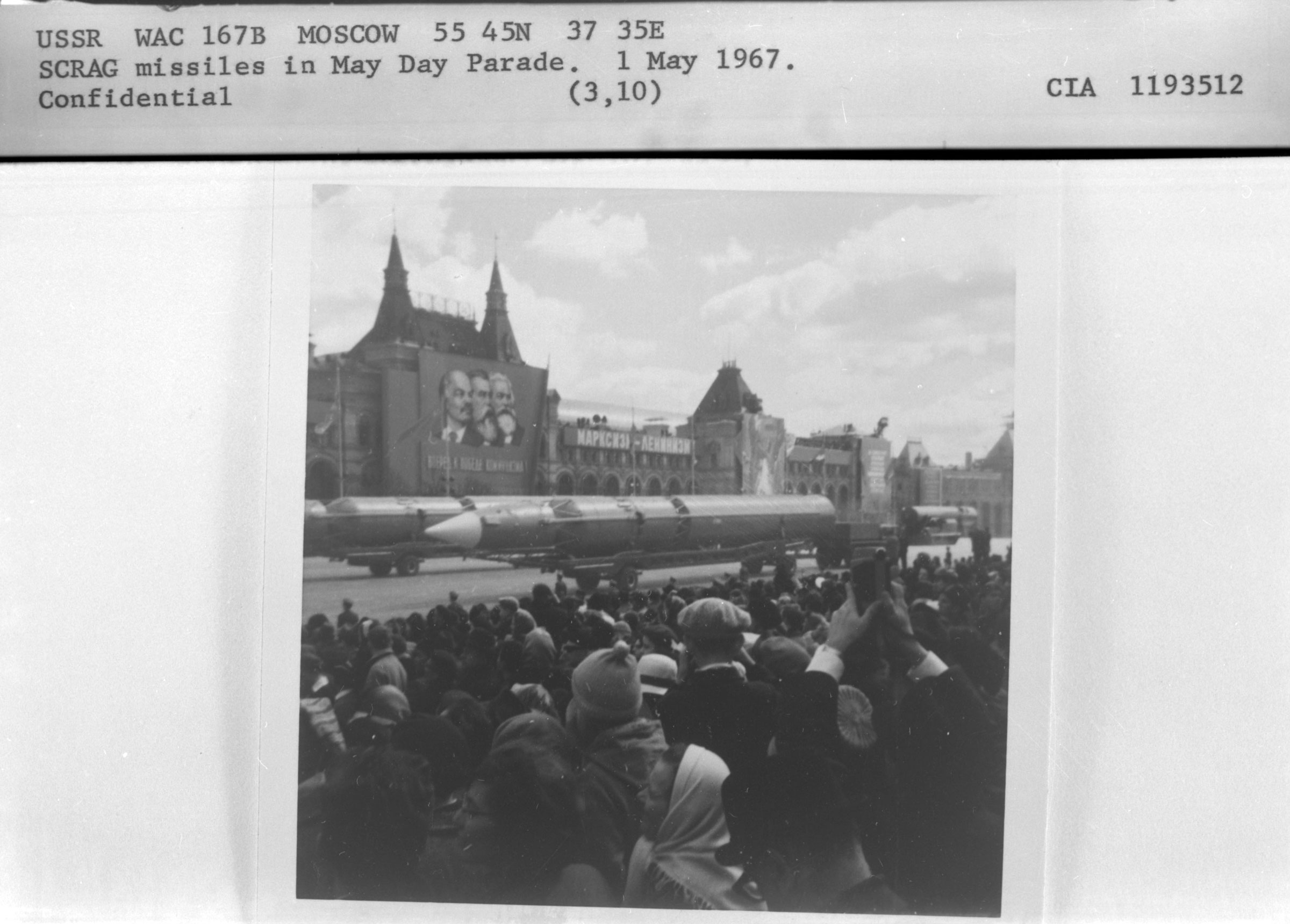 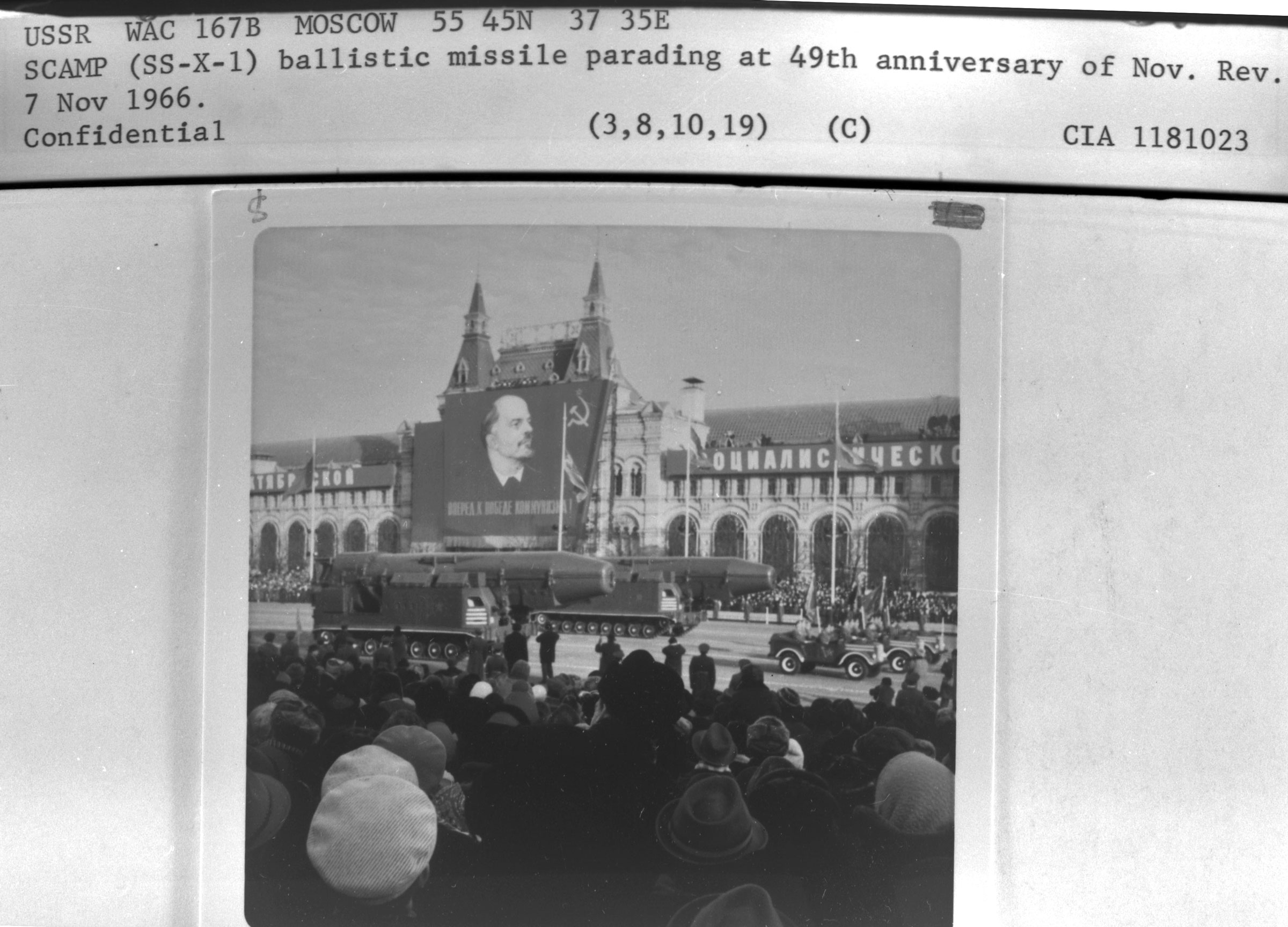 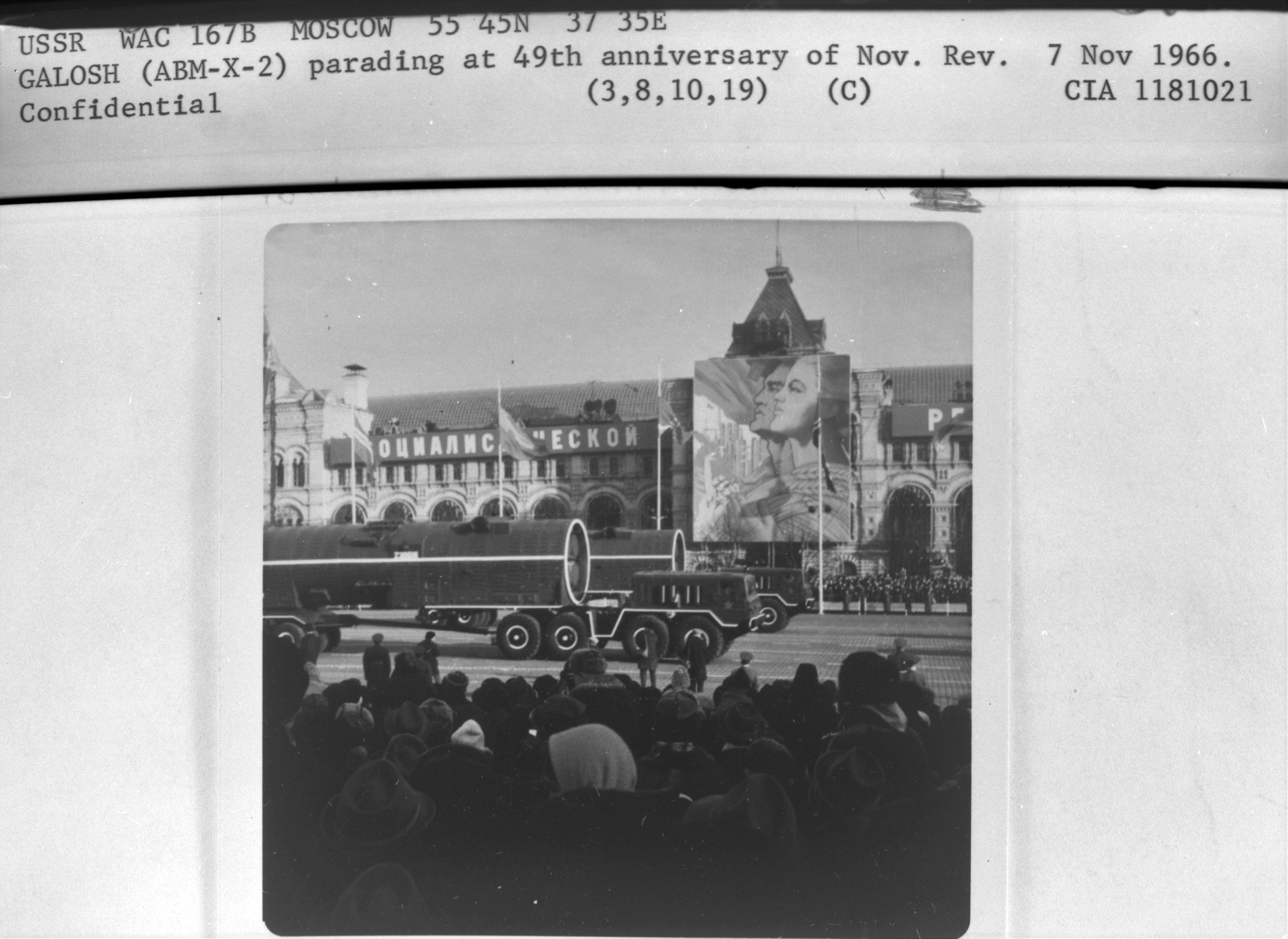 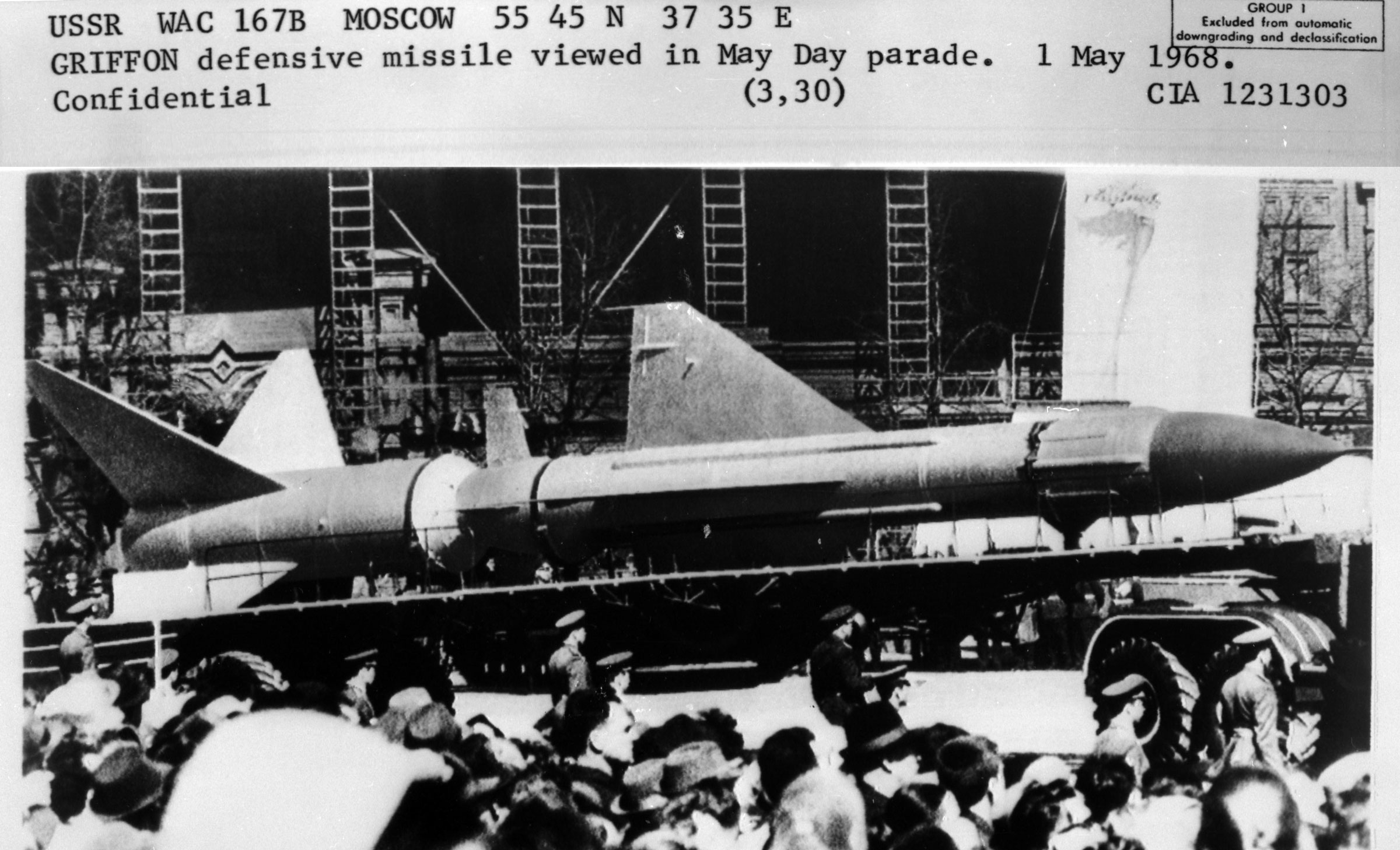 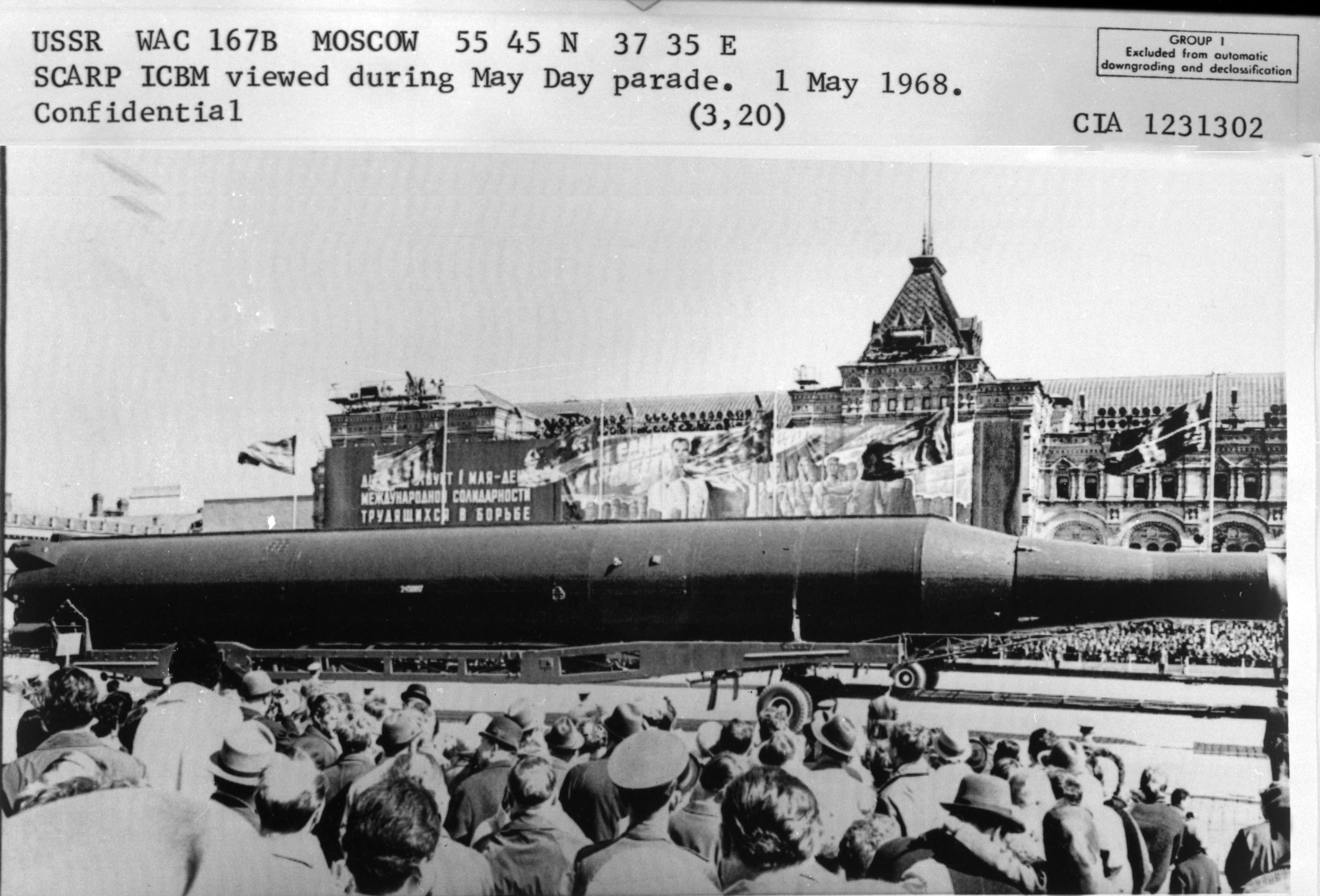 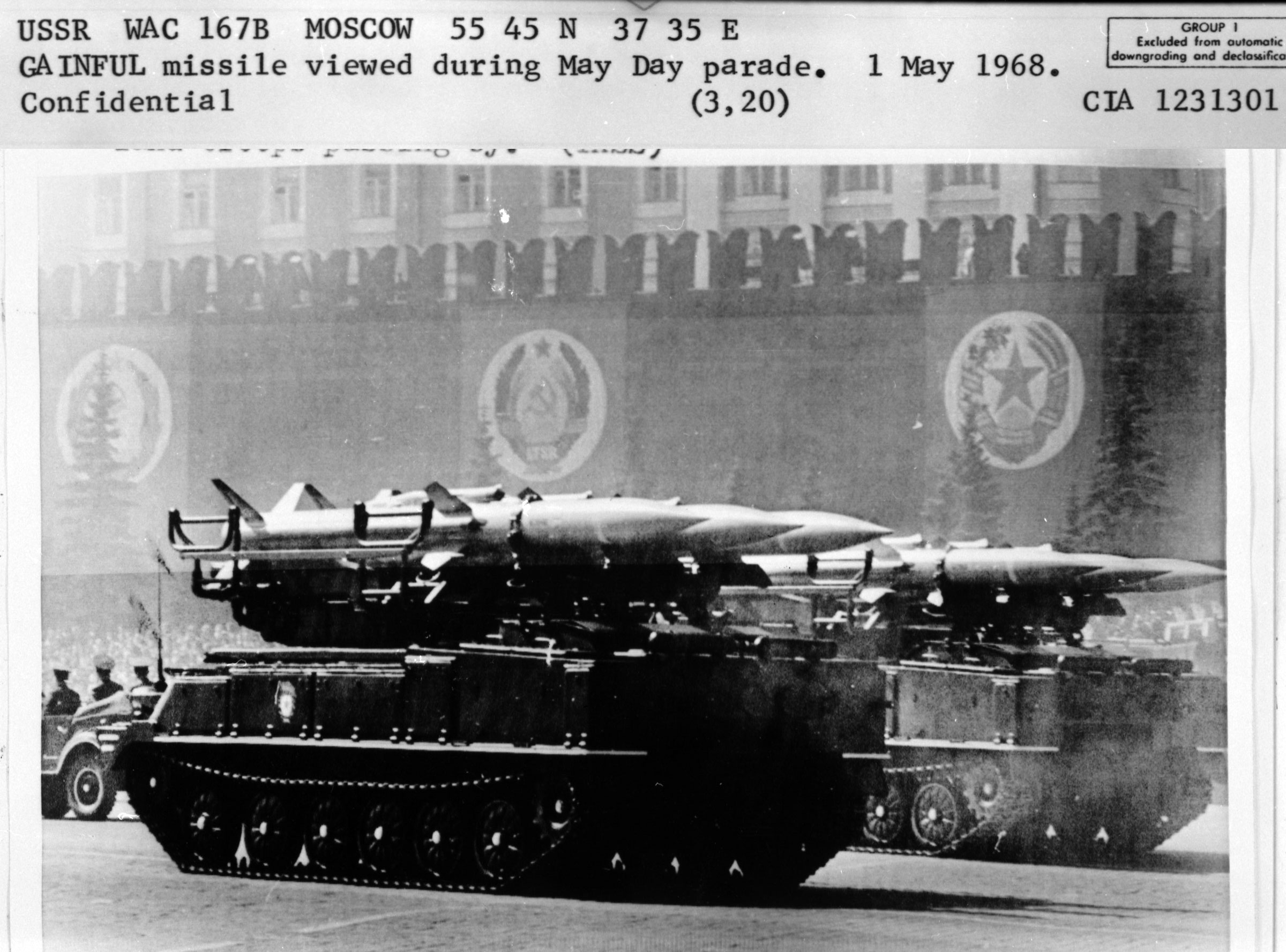 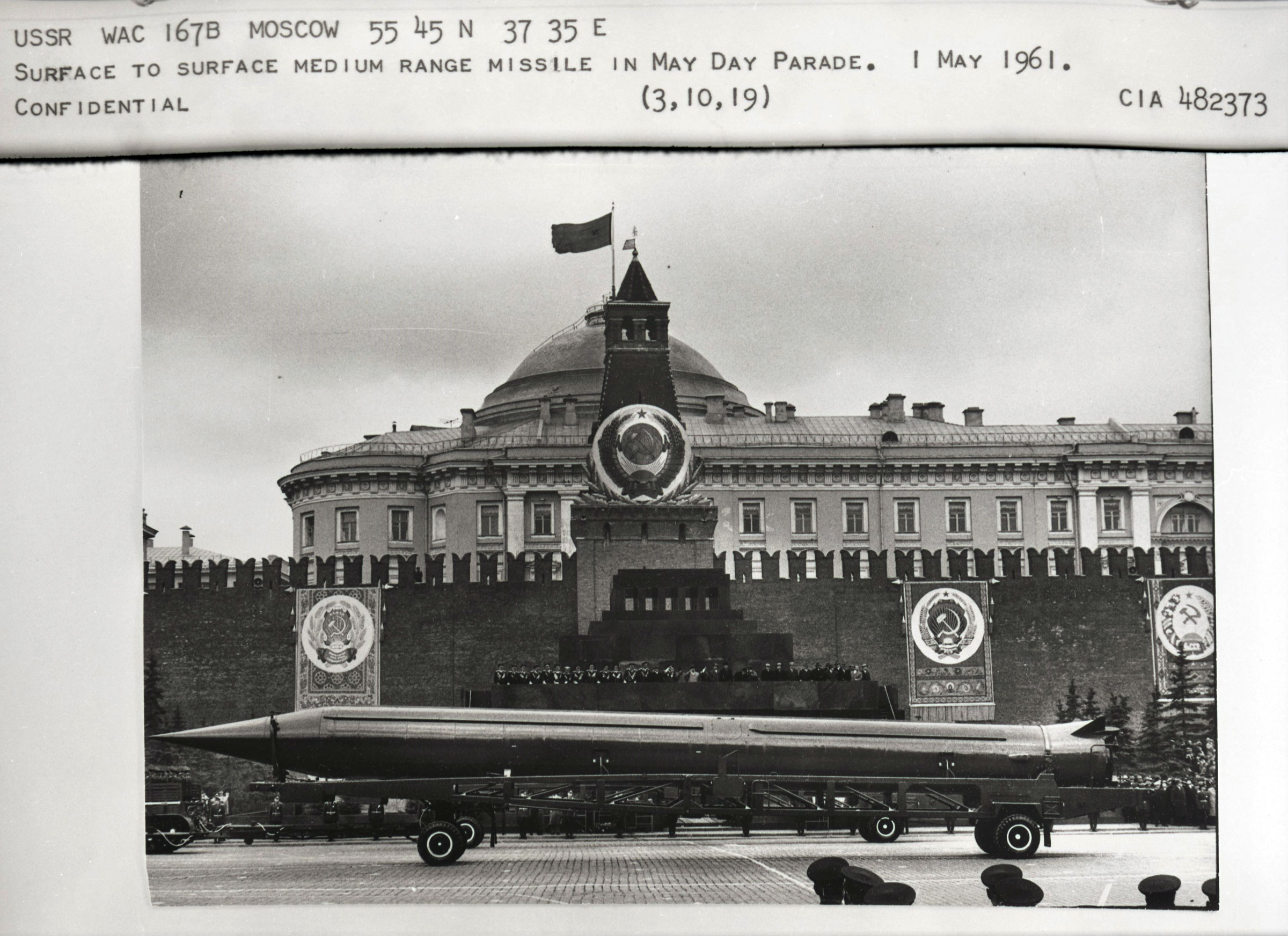 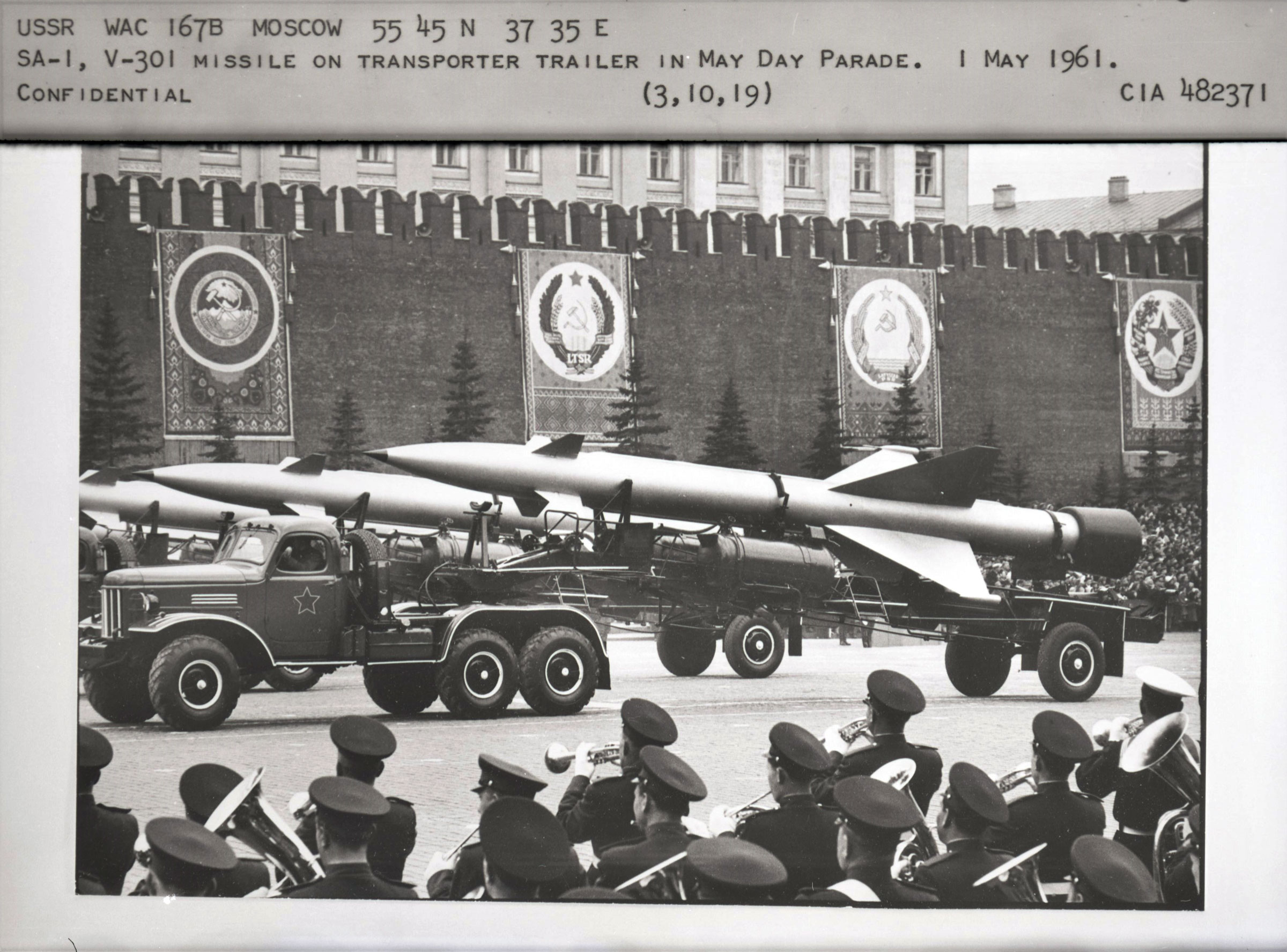 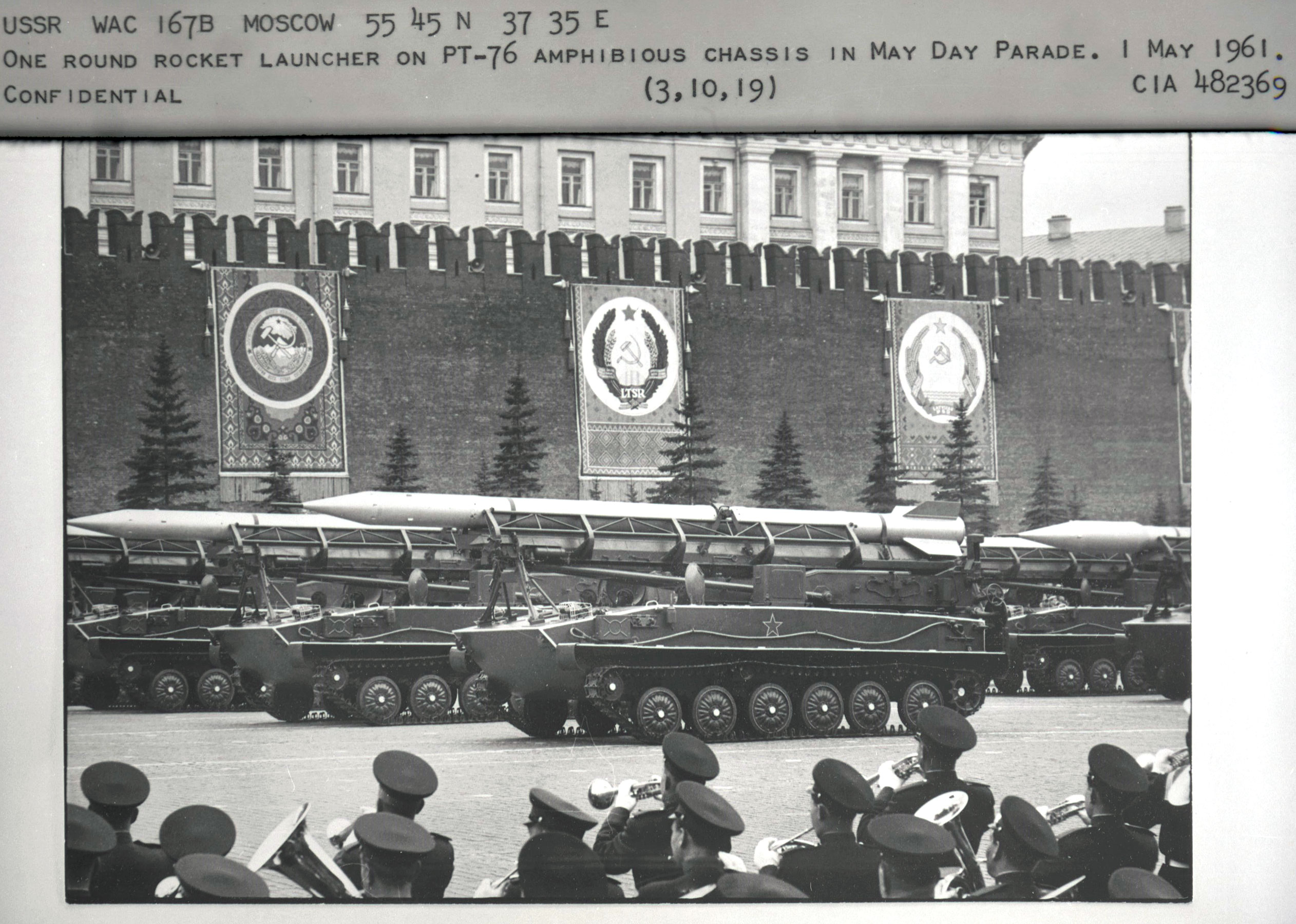 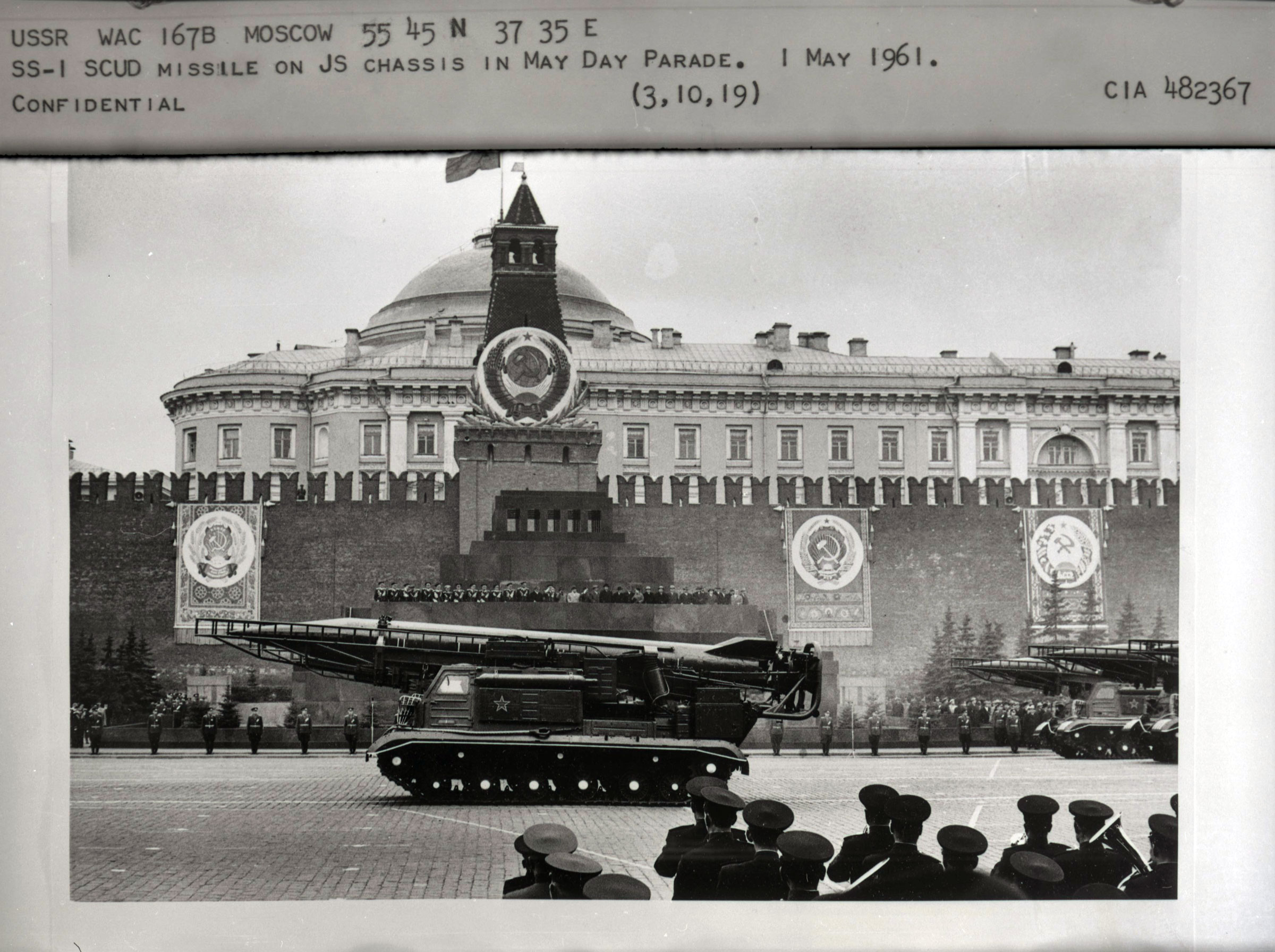 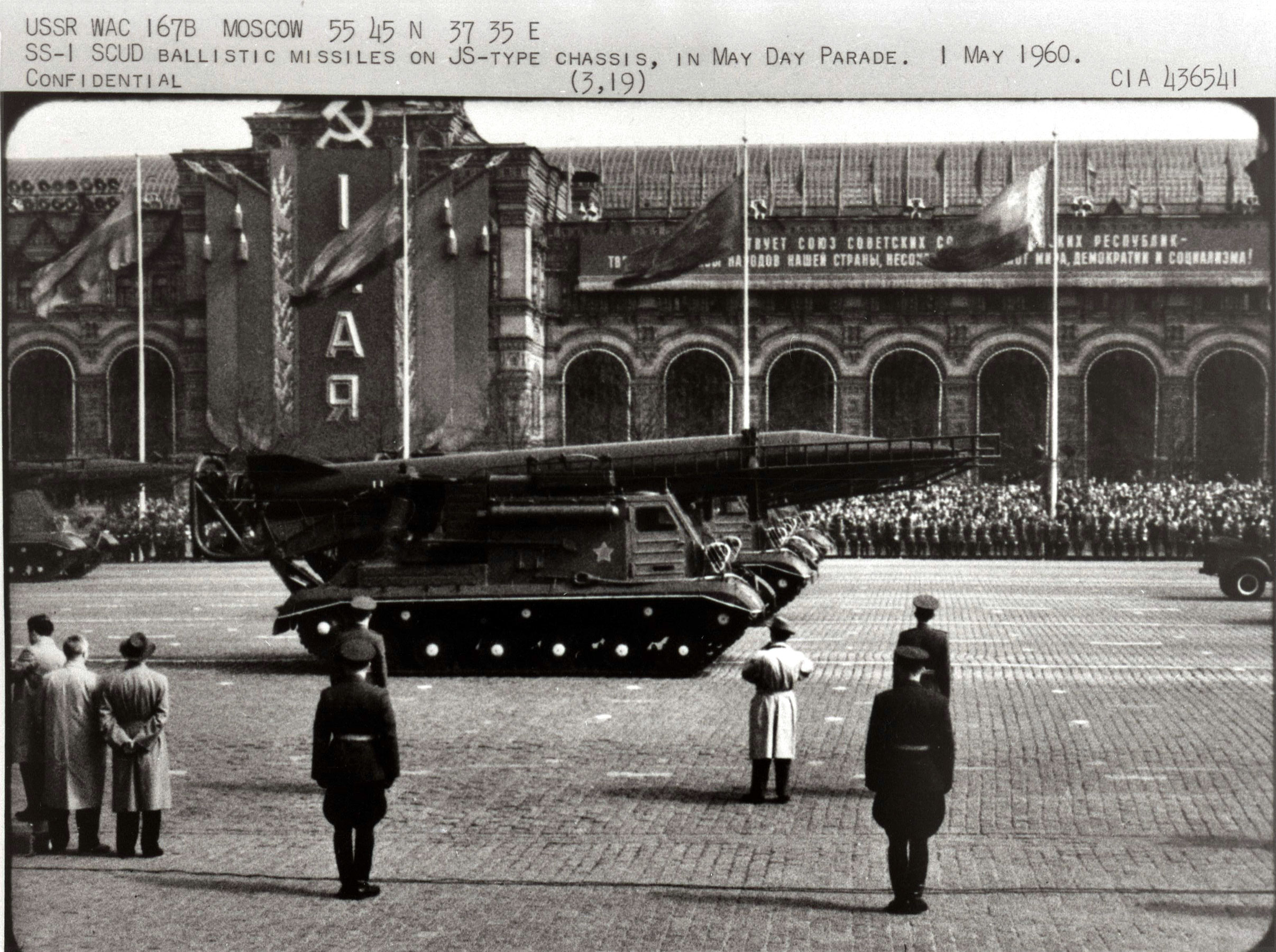 [2] Robert A. McDonald, Ph.D. and Patrick Widlake, “Looking Closer and Looking Broader: Gambit and Hexagon – The Peak of Film-Return Space Reconnaissance After Corona,” National Reconnaissance – Journal of the Discipline and Practice, January 2012, p. 2.