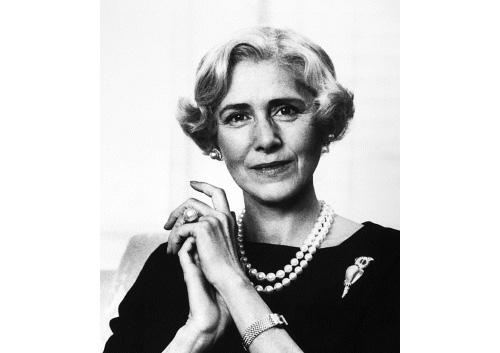 Clare Boothe Luce, U.S. envoy to Italy from 1953-1956, was as famous for her glamour and blunt speaking as for the distinction of being the first woman to represent the U.S. in a major diplomatic post. (Undated photo from the Carl Van Vechten collection, Library of Congress)

Despite Rhetoric, Eisenhower Was Not Prepared to Intervene Militarily to Block Communists Short of Forcible Seizure of Power, Study’s Author Concludes

Alcide de Gasperi, a Christian Democrat, was Italy’s prime minister from 1945-1953. In 1947, he removed all Communists and Socialists from his Cabinet. Behind him, with arms folded, is Minister of Interior Mario Scelba who later became prime minister himself (1954-1955). (Photographer and date unknown)

Washington, D.C. February 7, 2017 – CIA covert aid to Italy continued well after the agency’s involvement in the 1948 elections – into the early 1960s – averaging around $5 million a year, according to a draft Defense Department historical study published today for the first time by the National Security Archive at The George Washington University.

The study, declassified in 2016, focuses on the role of Clare Boothe Luce as ambassador to Italy, 1953-1957.  In addition to overseeing a program of covert financial support to centrist Italian governments, she used the awarding of contracts under the Department of Defense Offshore Procurement Program to weaken the Italian Communist Party's hold on labor unions. The author concludes that the Eisenhower administration, faced with the possibility of civil war in Italy or the Communist Party coming to power legally, was "willing to intervene militarily only if the Communists seized power forcibly and then only in concert with other European nations."

Today's posted document was written by Dr. Ronald D. Landa, formerly with the State Department's Office of the Historian and the Historical Office of the Office of the Secretary of Defense.  It is one of three drafts he prepared for the latter office that were intended as chapters in a monograph on United States policy toward Europe during the Eisenhower administration.  Landa finished the drafts in 2011 and early 2012.  Declassification review took another 3-4 years.  Budgetary limitations prevented completion and publication of the book.

This posting and two subsequent ones--on United States policy leading to the 1956 Hungarian Revolution and on its policy during the Hungarian Revolution--focus on issues with a military dimension not covered by volumes in the official series, History of the Office of the Secretary of Defense.  They are of added interest given the author's access to classified U.S. records, although readers will notice that certain information has been redacted by U.S. Government reviewers. Dr. Landa also researched a variety of open materials, including the Central Intelligence Agency’s CREST database, the Declassified Documents Reference System, the Digital National Security Archive, and British records at The National Archives in London.

The National Security Archive is grateful to Dr. Landa for making these draft studies available so they could become part of the ongoing scholarly exploration of the U.S. role in Europe during a critical phase of the Cold War.

Working Bibliography for "Shots from a Luce Cannon"
Source

My work as a historian at the State Department (1973-1987) and in the Office of the Secretary of Defense (1987-2012) made me aware that U.S. efforts in the years after World War II to reduce the power of the Italian communist party, as well as other aspects of U.S. policy, were not adequately treated in the Foreign Relations of the United States volumes and other publications.  I therefore tried to broaden the range of material researched, primarily by utilizing CIA records and by closely examining Clare Boothe Luce’s extensive personal collection at the Library of Congress and records at the National Archives from her tenure as ambassador.

A correction is needed on page 2.  Luce was the second, not the first, female member of the House Armed Services Committee.  On page 53, I left open the question of whether her claim of suffering from lead poisoning was genuine or a hoax.  The second volume of Sylvia Jukes Morris’ biography, Price of Fame (2014), argues persuasively that it was genuine.

Documentation in Support of Archive Challenge on 50-Year-Old Operations in Italy
August 2, 2000

First page of the Landa study on Italy. 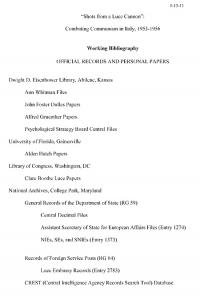