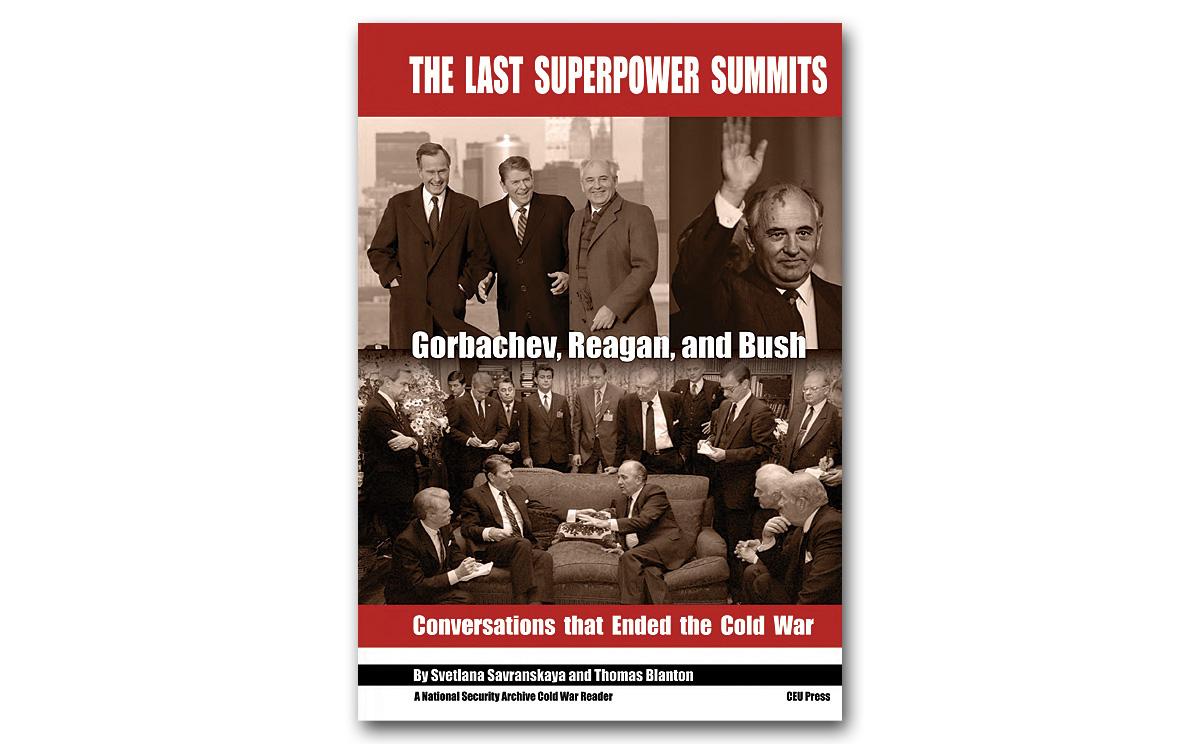 The Last Superpower Summits publishes virtually every word Reagan, Gorbachev and Bush said to each other from 1985 through 1991

PHOTOS FROM THE BOOK 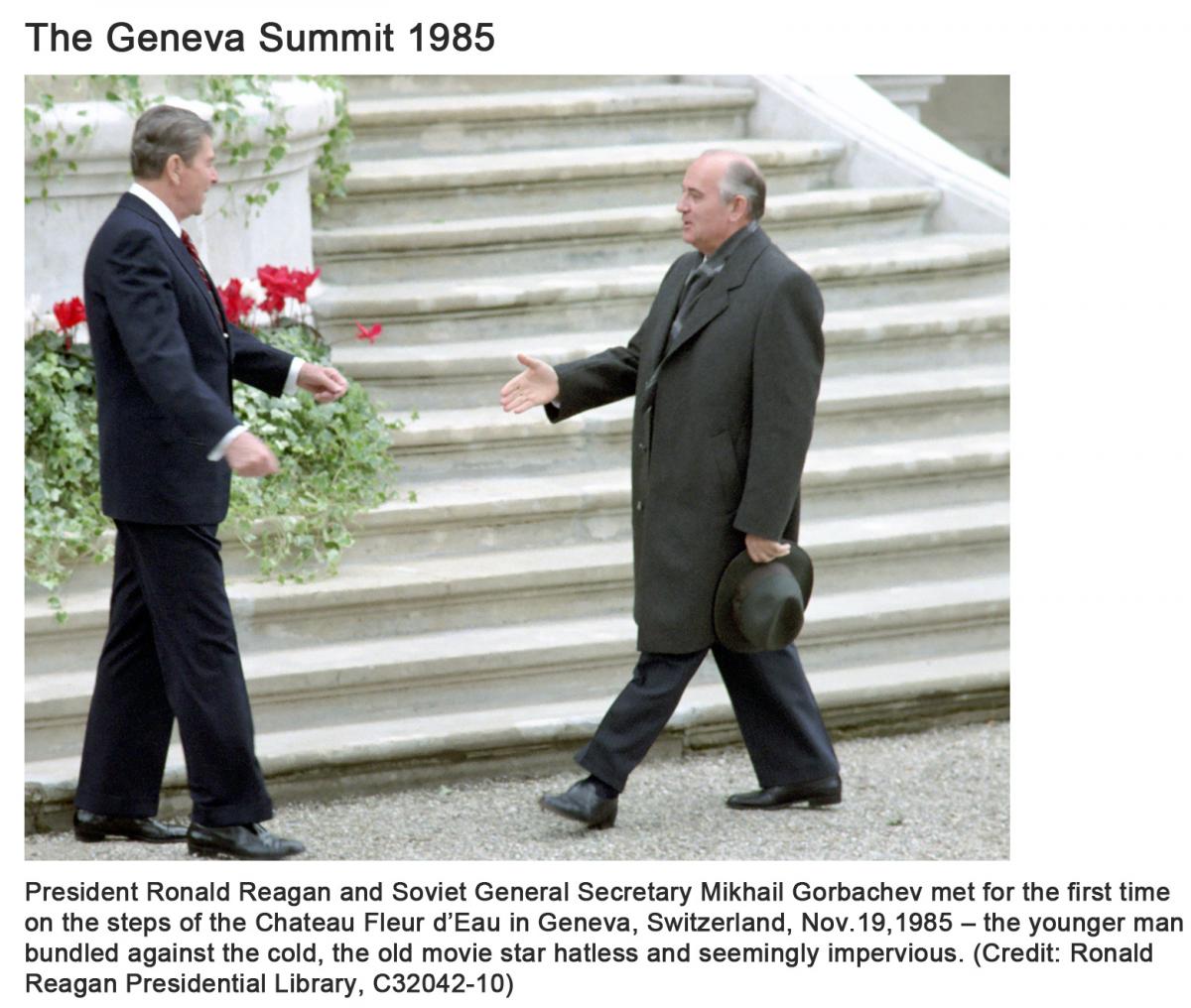 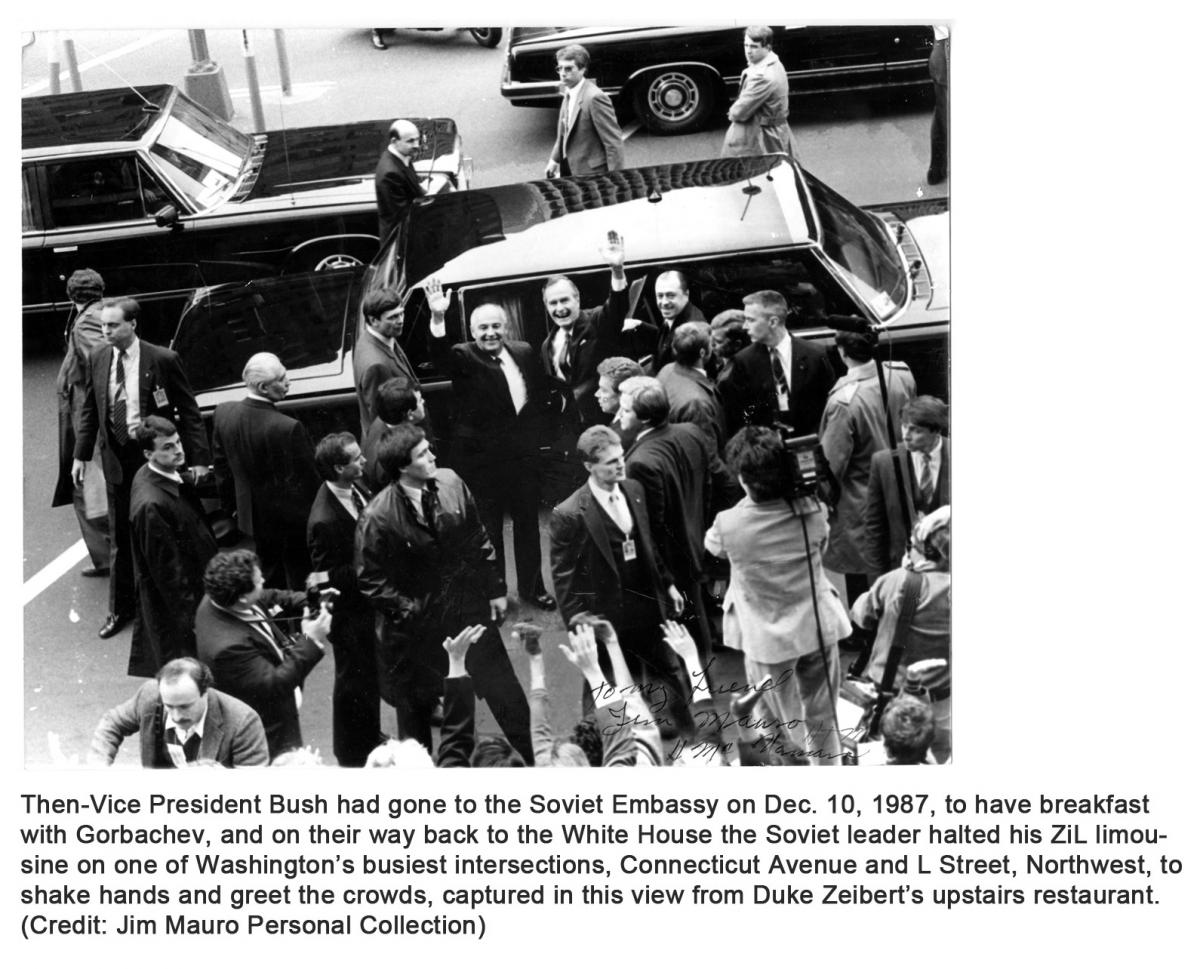 Then-Vice President Bush had gone to the Soviet Embassy on Dec. 10, 1987, to have breakfast with Gorbachev, and on their way back to the White House the Soviet leader halted his ZiL limousine on one of Washington’s busiest intersections, Connecticut Avenue and L Street, Northwest, to shake hands and greet the crowds, captured in this view from Duke Zeibert’s upstairs restaurant. (Credit: Jim Mauro Personal Collection)

Washington D.C., December 18, 2016 – Previously secret transcripts of the summit meetings between Ronald Reagan and Mikhail Gorbachev from 1985 to 1988, and then George H.W. Bush with Gorbachev from 1989 through 1991, show the Soviet leader pursuing an arms race in reverse, Reagan recommending quiet dialogue on human rights, and Bush seeking new nuclear weapons before coming around to cuts at the end, according to a new book published this month by the National Security Archive and Central European University Press.

The culmination of 20 years of research, The Last Superpower Summits: Gorbachev, Reagan, and Bush: The Conversations that Ended the Cold War amasses for the first time in print virtually every word the Soviet and U.S. leaders said to each other in their summits from 1985 to 1991. The authors, Svetlana Savranskaya and Thomas Blanton of the National Security Archive, obtained these formerly Secret and Top Secret transcripts through the Freedom of Information Act in the U.S., from the Gorbachev Foundation and the State Archive of the Russian Federation in Moscow, and from the personal donation of Gorbachev adviser Anatoly Chernyaev.

The book combines the summit transcripts with key declassified preparatory and after-action documents from both sides to create a unique interactive documentary record of these historic highest-level talks – conversations that ended the Cold War. The authors argue, in contextual essays on each summit and in detailed headnotes for each document, that the summits fueled a process of learning on both sides. Geneva 1985 and Reykjavik 1986 reduced Moscow’s sense of threat and unleashed Reagan’s inner abolitionist. Malta 1989 and Washington 1990 helped dampen any superpower sparks that might have flown in a time of revolutionary change in Eastern Europe, set off by Gorbachev and by Eastern Europeans including Polish Solidarity, dissidents, and reform Communists.

Today’s Web posting includes the declassified transcript of the dramatic final session of the Reykjavik summit in October 1986, when Reagan and Gorbachev agreed on abolishing nuclear weapons, but could not see eye to eye on limiting missile defense (Reagan’s dream of a shield, Gorbachev’s nightmare of a first-strike from space).

Today’s posting also includes three other representative documents from the book, each of which has never been published before, beginning with Reagan’s self-dictated thoughts before his first meeting with Gorbachev in 1985, then Vice President Bush’s private limousine conversation with Gorbachev in 1987, and the surreal scene of career CIA officer Robert Gates meeting with KGB director Vladimir Kryuchkov at Lubyanka in February 1990.

Just before Ronald Reagan's first summit with the Soviet leader at Geneva in November 1985, the American president dictated his thoughts about the summit process and dealing with the Soviets in this previously classified memo. Among many remarkable lines, Reagan reminded himself, "let there be no talk of winners and losers. Even if we think we won, to say so would set us back in view of their inherent inferiority complex." Perhaps most striking is Reagan's language about keeping quiet on human rights: "I'm sorry we are somewhat publicly on record about human rights. Front page stories that we are banging away at them on their human rights abuses will get us some cheers from the bleachers but it won't help those who are being abused." This thinking became the basis for a quiet diplomatic ritual at every summit where Reagan would hand Gorbachev a list of individual cases of dissidents and refuseniks, and Gorbachev would actually take action on them, albeit slowly, so as not to seem under pressure.

Archive of the Gorbachev Foundation, Moscow

This Russian record of the last session at Reykjavik - somewhat more extensive than the American version - inspired Gorbachev's comment in his memoirs about "Shakespearean passions" at the summit. The transcript shows considerable confusion between proposals to reduce ballistic missiles versus all nuclear weapons, but finally Reagan raises the issue he has always wanted to promote - nuclear abolition. "We can do that. Let's eliminate them," says Gorbachev, and Shultz reinforces the idea: "Let's do it." But almost immediately the delegations circle back to SDI and the ABM Treaty. Gorbachev insists that SDI testing must be confined to the lab, and Reagan, already hostile to the ABM Treaty, continues to see this as tantamount to giving up SDI. Reagan asks Gorbachev to agree to allow SDI testing as a personal favor to him, but the Soviet leader thinks that if he did, he would be seen as a dupe back home. Gorbachev forces Reagan to say nyet, but it is Gorbachev who will have more to lose from the failure.

Archive of the Gorbachev Foundation, Moscow

This remarkable conversation took place in Gorbachev’s limousine on the way to the airport at the end of the Washington summit in December 1987, at which Reagan and Gorbachev signed the Intermediate Nuclear Forces Treaty (INF). Vice President George H.W. Bush came along to see Gorbachev off, and during the 35-minute ride, with only Soviet interpreter Pavel Palazhchenko present, the two men engage in a wide-ranging conversation that both would remember later as the basis for their own summits. Bush warns Gorbachev about likely “unpleasantries” during the upcoming presidential campaign, and makes the case that a Republican such as himself would do better than a Democrat in terms of getting deals done with the Soviets. Afterwards, Gorbachev orders Palazhchenko to write up his notes, and Russian excerpts have appeared in the Soviet leader’s memoirs, but never before in English. In Jon Meacham’s biography of George Bush, he recalls one part of this conversation dealing with the U.S. election campaign, based in part on Bush’s diary.[1] But the Gorbachev record of the talk includes a much wider discussion of international politics, including contending with Polish Communist leader Wojciech Jaruzelski, North Korea and China.

The U.S.-Soviet summits involved lower-level conversations as well, not only between foreign ministers and between defense ministers, but also, as in this extraordinary discussion, between career CIA officer Robert Gates (at this point serving as Bush’s deputy national security adviser) and KGB director Vladimir Kryuchkov – inside KGB headquarters at Lubyanka.[2] Gates has come to Moscow as part of Secretary of State James Baker’s delegation, and at the moment of this discussion, Baker is giving Gorbachev his famous “not one inch eastward” assurance about the expansion of NATO. Gates has the same message for Kryuchkov, part of a cascade of U.S. and German reassurances to the Soviets in 1990 to ease the way to German reunification. Notes of the discussion record the following comment by Gates: “Under these circumstances, we support the Kohl-Genscher idea of a united Germany belonging to NATO but with no expansion of military presence to the GDR. This would be in the context of continuing force reductions in Europe. What did Kryuchkov think of the Kohl-Genscher proposal under which a united Germany would be associated with NATO, but in which NATO troops would move no further east than they now were?” 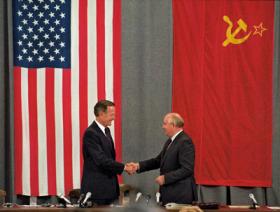 "Based on transcripts of the intense and often passionate dialogues and negotiations between the main initiators of the end of the Cold War, as well as their personal letters; and memoranda, notes and diaries of aides and advisors, this book offers the reader an exceptional chance to be 'a tly on the wall' at U.S.-Soviet summits ... This is exciting reading and a real textbook on the skill of statesmanship for new generations of political leaders."

Andrei Grachev, author of Gorbachev's Gamble and Final Days: The Inside Story of the Collapse of the Soviet Union; former Gorbachev press secretary

"This book is a triumph of history at a turning point- the end of the Cold War. In private conversations and once-secret documents, the leaders of the United States and Soviet Union struggle to end the superpower standoff. Fascinating, authentic and invaluable, The Last Superpower Summits combines the raw material of history and polished, compelling analysis. The book transports a reader back in time."

David E. Hoffman, Pulitzer-Prize-winning author of The Dead Hand: The Untold Story of the Cold War Arms Race and Its Dangerous Legacy

"The formerly classified documents and the astute commentary on them in this book are absolutely indispensable for understanding how the Cold War ended. Kudos to the National Security Archive for collecting, translating and analyzing them!"