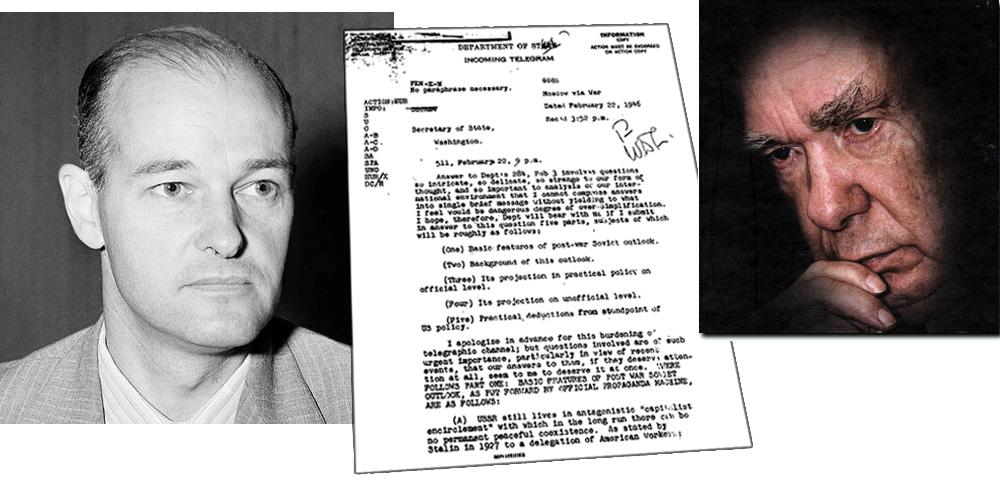 Soviet Reformer Yakovlev Discussed with Kennan the Famous Cable, Soviet History, and the Future of Perestroika

To mark the 75th anniversary of Ambassador George F. Kennan's "Long Telegram," the History and Public Policy Program gathered a group of renowned historians to discuss one of the most consequential foreign policy documents in US history. Hear from James G. Hershberg, Vladimir O. Pechatnov, Vladislav M. Zubok, Svetlana Savranskaya, Mark Kramer, and Sergey Radchenko as they analyze the document from a Soviet perspective.

Washington, D.C., February 22, 2021 - Leading Soviet reformer Alexander Yakovlev discussed with George Kennan his "X Article" that grew out of the famous Long Telegram in a previously unpublished October 1990 meeting in Moscow; and Kennan actually dictated the Long Telegram while laid up in bed with the flu, a sinus condition, and a foul mood, according to documents and transcripts posted today by the National Security Archive to mark the 75th anniversary of Kennan’s telegram from Moscow, which shaped the Cold War and U.S. policy towards the Soviet Union.

Today the Archive publishes for the first time in English the memorandum of conversation between perestroika architect Alexander Yakovlev and George Kennan where they discuss the conclusions of the Long Telegram, its relevance to the Soviet situation in 1990, and the problems faced by the Soviet reformers.

Adding historical context to the anniversary, the Archive accompanies the Yakovlev-Kennan memcon with an excerpt about the Long Telegram from the lengthy interview of Kennan done by Jeremy Isaacs Productions in June 1996 for the award-winning CNN Cold War series, for which the Archive produced documentary briefing books.

The Yakovlev-Kennan meeting took place in Moscow on October 5, 1990.  Kennan was in Moscow on his way from Berlin where he had attended the celebrations for German reunification.  The dean of American Sovietologists was closely following Soviet perestroika, trying to use all his knowledge and experience from decades of studying Russian history to comprehend the enormity of the task Mikhail Gorbachev and his supporters were trying to accomplish.

Most of the conversation takes place in Russian, which Kennan still speaks very well.  He asks to switch to English sometimes because his “language got a little rusty.”  He has not spoken Russian for forty years.

The tone of the conversation is warm and trusting, as if these are two old friends speaking.  In fact, Kennan was seen by the Soviet reformers as a good friend of Russia because of his anti-war and anti-nuclear positions, and because of his long experience studying Russia.  On December 8, 1987, Gorbachev himself told Kennan during a reception at the Soviet Embassy in Washington: “Mr. Kennan, we in our country believe that a man may be a friend of another country and remain, at the same time, a loyal and devoted citizen of his own; and that is the way we view you.”[1]

Yakovlev and Kennan start the discussion both referring to the Long Telegram, and both admit that times have changed so much that Kennan would not have written it this way today.  However, Kennan agrees with Yakovlev that there are parts of the telegram that still ring true—in the last section of the document where Kennan proposes to strengthen the U.S. domestic system, to make it more attractive to other peoples.  Both thinkers share with each other that they are still trying to grapple with the mystery of Stalin’s personality and the enormity of the crimes committed by his regime.  Kennan tends to think that a lot of pathologies in Stalin’s behavior stemmed from his sense of inferiority that never subsided.

Turning to the current situation in the Soviet Union, they discuss problems of agriculture, lack of initiative and personal responsibility, and the crisis of families.  Both complain about the military-industrial complexes in their countries, which are driven by their own logic where the possibility of war can turn into inevitability as armament levels grow together with perceptions of threat.  Yakovlev describes the tragic history of his country in the XXth century and the damage it has done to public trust in their political institutions.  Kennan emphasizes that it will take a very long time and a whole new generation to change that.

In addition to being an astute observer and a great scholar of Soviet life, Kennan is also an empathetic and sympathetic friend of Russia.  He expresses his admiration for Soviet teachers, for the natural talents of the Russian people and his faith in Gorbachev’s experiment.  At the end of the conversation, just as in the Long Telegram, he turns to the domestic situation in the United States and speaks about “our own problems, different from yours, but also very serious.”  He also cautions Yakovlev against taking everything American as a model for Soviet young people.  While supporting the idea of visits and exchanges, Kennan suggests that “when your young people come to visit us, they should not just imitate what young Americans do.  They should be taught to look at our young people critically, and to decide for themselves what to borrow and what to reject from our civilization.”

The Long Telegram [original], from George Kennan in Moscow to the Secretary of State, February 22, 1946.