Argentine human rights groups have requested that the Obama Administration declassify records from the CIA, the Defense Department, and the FBI.

How Obama’s ‘Declassified Diplomacy’ Could Aid the Cause of Justice in Argentina
By Peter Kornbluh and Carlos Osorio
The Nation
March 23, 2016

Kissinger to Argentine Generals in 1976: "If there are things that have to be done, you should do them quickly"
August 27, 2004

Kissinger to Argentines on Dirty War: "The quicker you succeed the better"
December 4, 2003

Washington, March 23, 2016 – Reinforcing the Obama administration’s planned “comprehensive effort to declassify” historical records on Argentina’s dirty war, the National Security Archive today posted examples of the kinds of materials in U.S. government files that would most likely enhance public understanding of that troubled period in Latin American history.  The posted documents, relating not just to regional developments but to official U.S. policy and operations, were declassified either through similar government decrees -- thus setting a useful precedent for current administration officials -- or the U.S. Freedom of Information Act.

In August 2002, the State Department released 4,700 documents on Argentina dating from 1975 to 1984. Declassified under a directive from Secretary of State Madeleine Albright during the Clinton administration, the documents were processed and delivered to the public during the administration of George W. Bush. The State Department acted in response to numerous requests in the late 1990’s and early 2000’s from human rights groups as well as from Argentine judges investigating abuses under military rule.

That release produced valuable information but was limited mostly to reporting from the U.S. Embassy in Buenos Aires on Argentina events. The U.S. Justice Department tried to elicit similar responses from other agencies to the Argentine judges’ requests under the Mutual Legal Assistance Treaty (MLAT), but only State chose to comply by undertaking a major declassification. The FBI, CIA and Defense Department declined to participate in the process,

Yet, in the case of other countries like Chile, Guatemala and El Salvador, declassified U.S. intelligence, defense and FBI records have been key to supplying critical information about local command structures, clandestine operations, and human rights violations. In 1999, for example, intense international pressure following the arrest of Augusto Pinochet led the Clinton White House to release over 20,000 pages of documentation on “human rights abuses, terrorism, and other acts of political violence in Chile."  Unlike the later Argentina case, that project involved several agencies: the Department of State, the CIA, the National Security Council, the Department of Defense, the Department of Justice, the FBI, and the U.S. National Archives.

These materials have had a powerful impact not only on the public’s awareness of events but on the personal lives of numerous victims and relatives of victims.  For example, one of the records from the 1999 Chile Declassification posted today is a Defense Intelligence Agency (DIA) information report providing details about an operation carried out by Argentine intelligence andUruguayan military intelligence in September 1976 against the Uruguayan insurgent organization, OPR-33 in Buenos Aires. 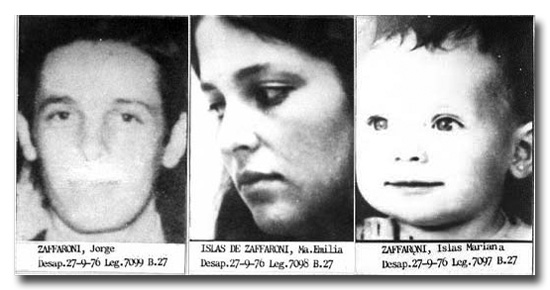 Jorge, Maria Emilia, and their daughter Mariana Zaffaroni, were kidnapped by Argentine and Uruguayan intelligence agencies in 1976. (Source: Sin Olvido)

As a result of this raid, dozens of Uruguayans living in Buenos Aires were disappeared. Among them were Jorge Zaffaroni and Maria Emilia Islas de Zaffaroni, and their 18 month old daughterMariana Zaffaroni Islas. Mariana was illegally appropriated and raised by one of the Argentine SIDE officers. She was DNA tested and her identity “recovered” by the Argentine Abuelas de Plaza de Mayo in 1992, when she was 17 years old.

The documents posted here today attest to the fact that these kinds of materials have the same potential to help Argentines in their pursuit of truth, human rights and justice. Still-classified documents in U.S. files undoubtedly describe similar operations against Argentine insurgents, dissidents and opposition, and would therefore significantly advance public comprehension of another historically significant episode of military repression in the region.

Furthermore, as important as the State Department’s 2002 Argentina declassification was, those records excluded an essential category of materials: documentation on U.S. policy toward Argentina. Only through dedicated research efforts over many years by individuals, news media and civil society organizations has the public managed to gain critical insights into previously classified aspects of the Washington decision-making process.

The most prominent case is that of then-Secretary of State Henry Kissinger.  Shortly after the 1976 coup, according to declassified State Department minutes of Kissinger’s staff meetings located at the National Archives and included here, his own Latin America specialists warned him “to expect a fair amount of repression, probably a good deal of blood, in Argentina.” Kissinger, however, made clear that he wanted to show unstinting support for the new military junta (see document below).  This approach, which effectively granted protective cover for major regime human rights violations, lasted until the end of Kissinger’s tenure in January 1977.

In addition to the policy process, another area of significant public interest would be what U.S. intelligence and military personnel were aware of, and what kinds of operations they conducted, during the coup and subsequent counterinsurgency campaign that started in 1976.  According to Assistant Secretary of State for Human Rights Pat Derian in early 1977: “The U.S. military and our intelligence agencies… [are] sending a dangerous and double message. If this continues, it will subvert our [President Carter’s] entire human rights policy.” (See document below)

It was on the basis of documented historical examples like those posted here today that The New York Times, in an editorial published on March 17, 2016, concluded that during his visit to Argentina, President Obama “should make a pledge that Washington will more fully reveal its role in a dark chapter of Argentine history.”