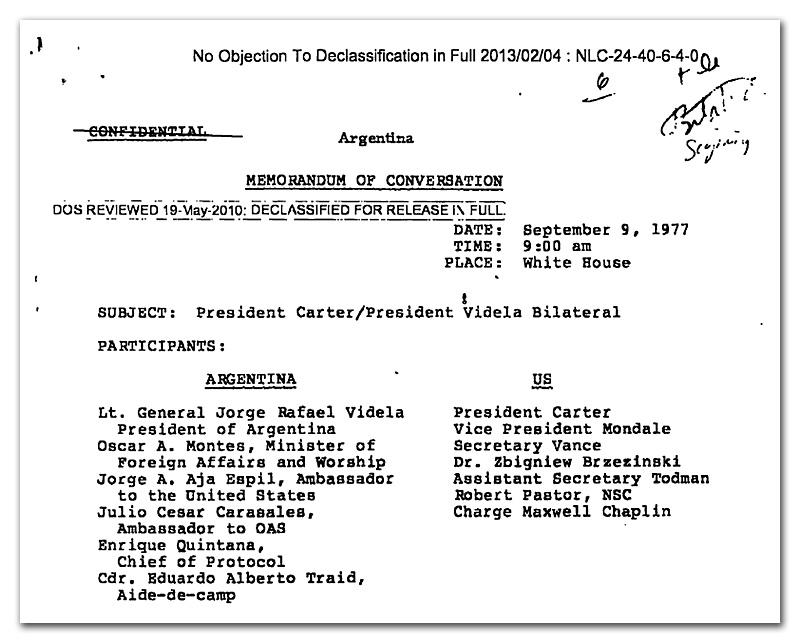 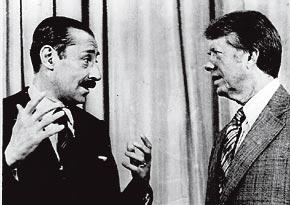 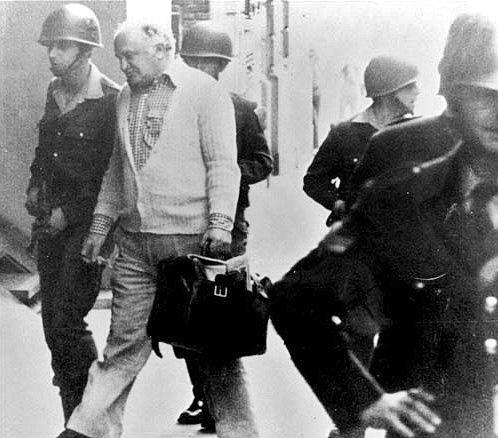 Jacobo Timerman is escorted back to his apartment to serve his sentence of house arrest after being tortured in jail in 1977. (Web image from LaOpinión1971, Medium, 10/15/2014)

Washington, D.C., August 11, 2016 – In September 1980, the U.S. embassy in Buenos Aires transmitted a detailed six-page cable, entitled “The Tactic of Disappearance,” to the State Department. Although the Argentine military regime had already “won the ‘dirty war,’” the cable stated, the military would not cease using “disappearance” as its preferred form of repression. “This unwillingness does not reflect simple bloody-mindedness by unthinking military men,” the Embassy reported in its comprehensive effort to explain the institutional mindset behind this horrific atrocity. (At least 22,000 people were “disappeared” during the first three years of the dictatorship.) “The military’s commitment to this method is profoundly rooted in elements that range from effectiveness through expediency to cultural bias.” The Embassy recommended enlisting the Vatican to advocate for ending these abuses in Argentina. “Getting the authorities to abandon this tactic will be an uphill battle. We must try.”

The “Tactic of Disappearance” cable was among 1,078 pages of formerly secret records released by the Obama administration this week; this special presidential declassification represents “the first tranche” of thousands of records, among them intelligence reporting from the CIA and Defense Department, that President Obama promised Argentines would be released in the coming months. “I believe we have a responsibility to confront the past with honesty and transparency,” Obama stated during a visit with human rights victims and activists in Buenos Aires on March 24, 2016, the 40th anniversary of the military coup.

“We are conscious of the lessons of the past,” Secretary of State Kerry stated on August 4 when he personally handed over the first installment of records during a meeting with President Mauricio Macri in Buenos Aires. He, too, noted that there would be “more to come in the future.”

To fulfill President Obama’s commitment, his administration plans a series of releases that will include CIA, FBI, Defense and State Department records. Several of the releases will take place during the next administration. The project is being coordinating by the White House records management office and the Office of the Director of National Intelligence, which posted the 1,078 pages on its website this week at this URL:
https://icontherecord.tumblr.com/post/148650765298/argentina-declassification-project

The National Security Archive, which has provided advice on numerous executive branch declassification projects, commended the Obama administration for the publication of records related to Argentina. “This release on Argentina marks an important step forward in the quest for truth, justice and historical accountability,” noted Carlos Osorio, who directs the Archive’s Southern Cone project. “The Obama administration,” according to senior analyst Peter Kornbluh, “has established a precedent and a pattern of using declassified diplomacy.  Obama’s legacy,” Kornbluh said, “will include making the declassification of secret government records a creative component of U.S. policy to advance human rights.”

The documents released this week derive almost exclusively from the Jimmy Carter Presidential Library. They include numerous White House memoranda recording internal disagreements between the NSC and the State Department over how to implement President Carter’s ground-breaking desire to make human rights a top priority in U.S. foreign policy.  Among the records are formerly secret memoranda of conversation between Carter and Argentine junta leader General Jorge Videla, as well as records of a meeting between Videla and Vice President Walter Mondale in Rome in 1978. The White House records reveal Carter’s personal intervention in obtaining the release of one of Argentina’s most famous political prisoners, newspaper publisher Jacobo Timerman. They also reveal the consternation of U.S. officials at former Secretary of State Henry Kissinger’s efforts to challenge Carter’s human rights policy which, in essence, sought to repudiate Kissinger’s previous embrace of military dictatorships in Latin America and elsewhere.

During the signing of the Panama Canal treaties in Washington, President Jimmy Carter and General Jorge Videla sit down for a bilateral meeting at the White House to discuss "issues of common concern." Carter urges Argentina to sign the Tlatelolco and NPT nuclear agreements. The president applauds Argentina's recent "achievements" in dealing with the problem of terrorism. But at the same time, "In the privacy of the room," Carter suggests, he felt he could "express our concerns about the state of human rights in Argentina." Carter presents Videla with a document prepared by a Washington human rights group on the undue detainment of 3,000 people, among them newspaper editor Jacobo Timerman, whose case Carter specifically raises with Videla. Though Videla acknowledges the list, he defends the detention of Timerman, blames "the terrorists" for disappearances in Argentina, and whitewashes the other "undesirable consequences" of war against subversion. Videla "stressed he would do his utmost to reestablish order and control, and meanwhile he needed the understanding of Argentina's friends, especially natural friends such as the United States." According to the memorandum of conversation, "the meeting terminated with expressions of mutual goodwill."

In a follow-up meeting with General Jorge Videla a year later to underscore U.S. concerns about human rights, Vice President Walter Mondale sees the junta leader in Rome, Italy. "We want good relations but there are strains now," Mondale states, and "human rights are a central concern." Videla responds by accusing Assistant Secretary of State for Human Rights Patricia Derian of sabotaging relations and intervening in Argentina's domestic affairs. He complains that even though U.S.-Argentine relations are made up of political, cultural and economic interactions, "now our relations are focused solely on human rights." Mondale suggests that "if we can get on the road to progress in human rights, this whole other vista will open." The vice president uses the advent of new human rights legislation, known as the "Humphrey-Kennedy Amendment," as leverage to compel Videla to take steps to improve human rights conditions. He presses Videla to finally agree to a visit by the OAS Commission on Human Rights, and offers to send Assistant Secretary of State for Western Hemisphere Affairs Viron Vaky on an official trip to Buenos Aires before the Commission comes.

The U.S. ambassador to Argentina, Raul Castro, reports on former Secretary of State Henry Kissinger's visit to Buenos Aires. Ostensibly, Kissinger has been invited to watch the World Cup, but the Embassy suggests that the military junta is more interested in using him to defend their human rights record. In a meeting with General Jorge Videla, Kissinger claims that "Americans are not aware of Argentine history nor of its struggle against terrorism." Kissinger goes on to applaud Argentina's efforts in combating terrorism. Ambassador Castro expresses concern "that Kissinger's repeated high praise for Argentina's action in wiping out terrorism and his stress on the importance of Argentina may have gone to some considerable extent to his hosts' heads. Despite his disclaimers that the methods used in fighting terrorism must not be perpetuated, there is some danger that Argentines may use Kissinger's laudatory statements as justification for hardening their human rights stance."

In this National Security Council memorandum, NSC staff member Robert Pastor expresses concern for Kissinger's "apparent desire" to undercut President Carter's human rights policy during a recent visit to Buenos Aires. Pastor describes Kissinger's praise of the Argentine "campaign against terrorism" as "the music the Argentine government was longing to hear" and suggests that Kissinger is preparing a speech "to speak out against the Carter Administration's human rights policy." He advises national security adviser Zbigniew Brzezinski to arrange for Pastor to debrief Kissinger on his trip "to see whether he is really concerned enough about our human rights policy to launch a campaign [against it] and inform him of the effectiveness of our human rights policy in Latin America."

In a policy memo to national security adviser Zbigniew Brzezinski, his deputy, Robert Pastor, calls the human rights situation in Argentina "the worst in the hemisphere." "Increasingly," Pastor's report states, "the people who disappear have vague associations with the 'political left' rather than with terrorism." However, Pastor advises that Brzezinski intervene to prevent the State Department from increasing pressure and sanctions against the Argentine military. "When we take punitive steps toward Argentina," he argues for caution, "we not only enrage the right-wing ideologues, we also arouse the business sector and the media in the U.S." Instead, he advocates a continuation of the current "cool and correct posture" and using diplomatic communications to encourage the regime "to clean up its act."

Another NSC deputy, Jessica Matthews, suggests that in the near term "nothing will work" unless domestic conditions change in Argentina. She advocates a "consistency" in overall U.S. policy toward human rights which would require Washington to vote "no" on multilateral loans to the regime.

At the request of national security adviser Zbigniew Brzezinski, Robert Pastor drafts a memo to be given to Secretary of State Cyrus Vance urging him to "reconsider your position on Argentina." The memo, to be sent over Brzezinski's signature, presents Pastor's arguments that increasing sanctions on Argentina for gross violations of human rights is not "the most effective approach" to curtail abuses. Instead, the memo argues that "our policy should remain cool and correct" because "punitive" steps will "invite criticism from moderate and conservative sectors in the U.S." and not be "effective" to change the behavior of the Argentine military. Brzezinski's letter suggests that even if Vance wants to pursue a tougher policy he delay implementation until after the Inter-American Commission on Human Rights visits Argentina and issues a credible report on the human rights situation there. Fearing leaks, Pastor recommends in a cover memo that Brzezinski share these arguments with Vance over the phone or in a face-to-face meeting rather than sending the memo to the State Department.

A confidential memorandum from national security adviser Zbigniew Brzezinski seeks to dissuade President Carter from meeting with Argentine torture survivor Jacobo Timerman. Carter had personally intervened on Timerman's behalf during a meeting with Argentine junta leader General Jorge Videla in 1977. But Brzezinski argues that meeting with Timerman after his release could be seen by Argentine military "moderates" as an "unfriendly (rather than an appreciative) gesture" and make them "less likely to be accommodating to future [human rights] cases." Timerman's release, according to the memo, "was the culmination of a vicious struggle between moderates and hardliners in the Argentine military" which "provoked a coup" attempt that was unsuccessful. In lieu of a meeting, Brzezinski suggests that Carter send a presidential letter "conveying your congratulations."

Department of State, "The Tactic of Disappearance," Confidential, Cable, September 26, 1980

In a confidential cable from the U.S. Embassy in Buenos Aires, U.S. diplomats evaluate the Argentine tactic of disappearance as a method for fighting "terrorism." "Based on everything we know," the report states, "we believe that detainees are usually tortured as a part of interrogation and eventually executed without any semblance of due process." The Embassy gives little hope that the tactic will cease to be used by the regime because, put plainly, "it worked." The document provides a rare analysis of the additional reasons that the Argentine military refuses to stop disappearing opponents, including the need to avoid all accountability for executing them. The authors recommend a series of vague efforts to convince the junta that a military court justice system could substitute for extrajudicial murder. "If the military could be shaken out of their belief that death is the only reasonable punishment for terrorists, the Armed Forces might see the advantage in using the military courts." They also recommend involving the Vatican to persuade the junta to cease the practice of disappearance. "The church and the Pope have far more influence here than the USG."