Ray Cline, Memorandum for the Record, “Notification of NSC Officials of Intelligence on Missile Bases in Cuba,” October 27, 1962

The film from the October 14 U-2 mission that first photographed Soviet missiles in Cuba “took approximately 24 hours” to be returned, processed, delivered to the National Photographic Interpretation Center, and scanned by analysts, according to an after-action report written by the third-ranking CIA official, Ray Cline, at the request of the President.

Not until about 5:30 p.m. on October 15 did the photo interpreters conclude what they were seeing was Soviet missile bases, and take that information to Cline, who let his boss, Gen. Marshall Carter, know around 6:15 p.m. Carter expected to see the chairman of the Joint Chiefs, Gen. Maxwell Taylor, at dinner, and likewise, the national security adviser McGeorge Bundy.

But around 9:30 p.m. the analysts called Cline to say (“cryptically” since it was an open line) the missiles were likely in the 700- or 1000-mile range. Cline called Bundy, who understood the alarm despite Cline’s “double-talk[]” over the phone, and his peer Roger Hilsman at the State Department, on whom “the light finally dawned.”

Cline took the finished intelligence to the White House on the morning of October 16, first briefing Bundy, then the Attorney General, Bobby Kennedy. Cline notes that "Bobby's initial comment was one four-letter word, off the record.”

Cline wrote this document much later, on October 27, after a direct request from President Kennedy on October 25, to address claims circulating in Washington that the missile information was available “for several days before it was called to the attention of the President.” Cline tells JFK that was “categorically” “untrue”; but JFK’s concern reflects the intense political pressures he felt. 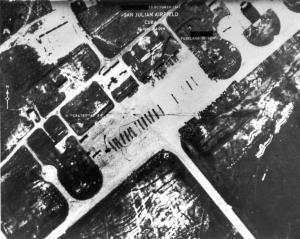 The same October 14 U-2 mission also photographed Soviet bombers, the IL-28s, in crates at the San Julian airfield. The top of the photo says October 15 because that’s the day the film was processed and analyzed.