Reading this memo, you are a fly on the wall of the first Cuban Missile Crisis meeting at the White House, on Tuesday, October 16, 1962. The CIA has written up what they know about the missiles detected in the U-2 photographs, and even produced a map of the U.S. showing the ranges and locations that the missiles could hit. The head of the National Photographic Interpretation Center, Arthur Lundahl, and his best “missile man,” Sidney Graybeal, presented this briefing to President Kennedy and 15 of his top advisers—the so-called ExComm (Executive Committee).

A Cabinet Room recording from 11:50 A.M. on October 16 captures portions of Kennedy’s first briefing on the missile crisis from CIA imagery analysts on the results of the Oct. 14 U-2 overflight of Cuba. (Source: “Audio Clips from the Kennedy White House,” National Security Archive Cuban Missile Crisis collections.)

The core conclusion is that the length of the missiles— “80-foot trailers” —means they are medium-range ballistic missiles, either SS-3s (700 nautical mile range) or SS-4’s (1,100 nautical mile range), which could reach Washington D.C. The proof comes from photographs of exactly such missiles on parade in Red Square (not so much the information from the CIA’s mole in Moscow, Col. Oleg Penkovsky). The U-2 photos showed eight more such trailers at the second site, just five miles away, along with missile erectors.

The CIA memo remarkably argued that “The Soviet leaders’ decision to deploy ballistic missiles to Cuba testifies to their determination to deter any active US intervention to weaken or overthrow the Castro regime, which they apparently regard as likely and imminent.” This motivation would be missing from most of the ExComm discussions, which hardly ever considered U.S. covert operations towards Cuba as playing any role in Soviet decisions.

The best narrative of the ExComm meetings comes from Sheldon Stern, the long-time Kennedy Library historian who first listened to the secret White House tapes in the 1980s and later produced the most thorough and accurate rendering of them in 2003 (Stern, Averting ‘The Final Failure’: John F. Kennedy and the Secret Cuban Missile Crisis Meetings). The title comes from a Kennedy quote about what a nuclear exchange would represent, the final failure. 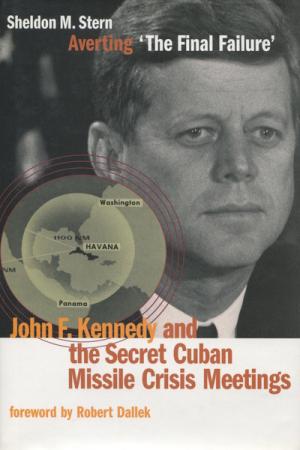 [insert graphic of the cover of Sheldon Stern’s book]

The first ExComm meeting on the morning of October 16 focused on the necessity to get the missiles out of Cuba, and considered only military options, such as limited air attack, all out air attack, and full-scale invasion. Not yet on the table were either the blockade option or diplomacy. One fascinating moment occurred when Secretary of State Dean Rusk cited CIA director John McCone’s belief “that Khrushchev may feel that it’s important for us to learn about living under medium-range missiles and he’s doing that to sort of balance that uh … political, psychological flank.” (Stern p. 70) 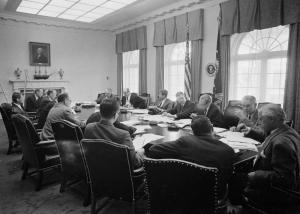 In Stern’s account (p. 86) comes an extraordinary moment of truth in the second ExComm (6:30 p.m.) on October 16, 1962. President Kennedy asks: “Why does he put these in there though? … It’s just as if we suddenly began to put a major number of MRBMs in Turkey. Now, that’d be goddam dangerous, I would think.”

National security adviser McGeorge Bundy quickly responds: “Well we did it, Mr. President.” To which JFK (rather lamely) says: “Yeah, that was five years ago. But that was a different period then.”