Former Illinois governor Adlai Stevenson had been the Democratic nominee for president twice, in 1952 and 1956, and lost both times to Dwight Eisenhower. For the 1960 race, John F. Kennedy effectively shoved Stevenson aside, edged other contenders (like Hubert Humphrey) in the primaries, and narrowly defeated Eisenhower’s vice-president, Richard Nixon, in the general election. Afterwards, Stevenson expected a Cabinet post, but accepted the only Kennedy offer—the United Nations position in New York.

Late on October 16, 1962, the day the CIA briefed Kennedy on the existence of Soviet ballistic missiles in Cuba, the President met privately with Stevenson. Kennedy told Adlai that the initial consensus of his advisors, which the President supported, was to launch a series of airstrikes to take out the missiles. Stevenson advised the president to instead consider peaceful, diplomatic alternatives to convince Soviet Premier Nikita Khrushchev to remove the missiles. 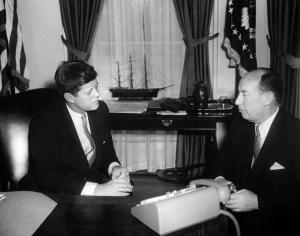 In this memorandum, written the next morning to advance the argument for the use of diplomacy over the use of force, Stevenson cites the “incalculable consequences” of airstrikes in Cuba and urges Kennedy to make clear to his advisors that “the existence of nuclear missile bases anywhere is negotiable before we start anything.” Adlai expresses his “misgivings about the proposed course of action” and insists that “it should be clear as a pikestaff that the U.S. was, is, and will be ready to negotiate the elimination of bases and anything else,” before risking an escalation to nuclear war. Among his recommendations are that Kennedy open back channels of communication with both Khrushchev and Fidel Castro.

“Adlai’s strong and early advocacy of ‘exploring the possibilities of a peaceful solution’ provided Kennedy with a blueprint to do exactly that,” the late historian, Martin J. Sherwin, wrote in his comprehensive book, Gambling with Armageddon. “In fact, Stevenson’s suggestions of October 16 and 17 were congruent with nearly all the steps that the president followed in resolving the crisis.” 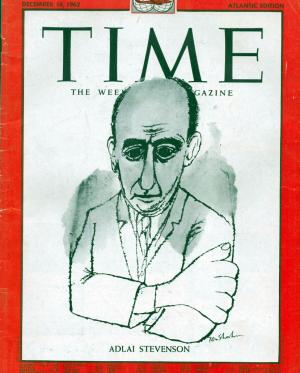 Ultimately, Kennedy would agree with Khrushchev to trade U.S. Jupiter missiles based in Turkey for the withdrawal of the newly installed Soviet medium- and intermediate-range ballistic missiles in Cuba. But the part of the accord that ended the crisis was kept TOP SECRET for decades. Publicly, the Kennedy White House promoted the official narrative that the Soviets had backed down in the face of U.S. resolve and determination. Instead of receiving credit for his cogent advice, Ambassador Stevenson became the sacrificial lamb of the missile crisis, labeled an appeaser and an advocate of a “Munich” in the Caribbean.