Probably the most contentious moment in the Kennedy White House tapes occurred on October 19, 1962. The Joint Chiefs of Staff, led by their most vocal member, Gen. Curtis LeMay of the Air Force, pressed Kennedy for a decision to invade Cuba and thousands of air sorties to prepare the way.

The historian Sheldon Stern, who first listened to the October 19 tape in 1981 (and later provided the most authoritative transcript), writes that he was shocked by Gen. LeMay’s aggressive tone and his argument, not just that “direct military action” was the only appropriate response to the discovery of Soviet missiles in Cuba, but that anything less would be “almost as bad as the appeasement at Munich.” (Stern, p. 123) Everyone in the room heard that remark as a personal attack on Kennedy, whose father Joseph Kennedy, then U.S. ambassador to London, had supported Neville Chamberlain’s policy towards Hitler in 1938.

But President Kennedy held his tongue. The Joint Chiefs pressed their case, and JFK kept reminding them that military action could lead to Soviet reactions in Berlin and elsewhere. General LeMay dismissed such concerns, claiming the Soviets would do nothing, even if hundreds or thousands of Soviets died in those air strikes on Cuba. Finally, LeMay condescendingly remarked, “In other words, you’re in a pretty bad fix at the present time.” Kennedy asked, “What’d you say?” LeMay: “I say, you’re in a pretty bad fix.” Kennedy quickly responded with an acerbic laugh, “You’re in with me, personally.” (Stern, p. 126)

Afterwards, Kennedy reportedly told his personal assistant David Powers: “These brass hats have one great advantage in their favor. If we listen to them and do what they want us to do, none of us will be alive later to tell them that they were wrong.” 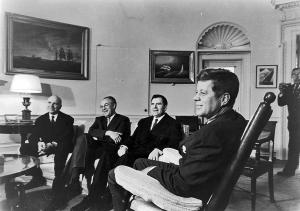 At the same time, Kennedy was getting no help from the Soviets on pursuing his cautious instincts. The day before the meeting with the Joint Chiefs, Soviet foreign minister Andrei Gromyko came to the White House together with his deputy Vladimir Semenov and his ambassador in Washington, Anatoly Dobrynin. Kennedy did not tape the conversation, but both the U.S. memcon and the Gromyko cable back to Moscow (sent on October 20) agree that Gromyko kept to Moscow’s line that weapons in Cuba were only defensive, and that the real problem was U.S. aggression towards Cuba.

At least three times in the conversation, Kennedy repeated that it was the Soviet shipments since July that raised the danger: “I must say that really it became grave only this summer … [when] Mr. Khrushchev, without notifying me, began to increase at a brisk pace the supplies of armaments to Cuba.” Gromyko’s cable reproduces paragraph after paragraph of the Foreign Ministry talking points on U.S. aggression, but also remarkably quotes Kennedy as saying, “The present situation is, perhaps, the most dangerous since the end of the Second World War.” In his desk, Kennedy had actual U-2 photos of the Soviet missiles but chose not to confront Gromyko with them.

Sitting beside Gromyko on the Oval Office couch, Soviet ambassador Dobrynin did not know about the missiles, so he was sincere when he told Americans that only defensive equipment was going to Cuba. Many years later, in 1989, at the Moscow conference organized by James Blight and janet Lang, Dobrynin turned to Gromyko and challenged him, “You never told me!” Gromyko responded, “It must have been a very big secret then.”