As the U.S. military prepared to invade Cuba, officials at U.S. Atlantic Command, under Adm. Robert L. Dennison, drafted a proclamation of military occupation for the Cuban people. It falsely accused Cuba of “violating international law and the freedom and independence of nations,” and claimed the U. S. had been “required to enter into armed conflict with the [Cuban] forces.”

The proclamation vested “all powers of government, executive, legislative, and judicial and all jurisdiction in the occupied territory and over its inhabitants” in the hands of a U.S. military governor and directed that “all persons in the occupied territory will obey immediately and without question all enactments and orders of the military government.”

Once the “aggressive Castro regime has been completely destroyed” and arrangements for a democratic successor made, the proclamation concluded, “United States armed forces will depart and the traditional friendship of the United States and the government of Cuba will once more be assured.”

But on the same day that CINCLANT Dennison prepared this Proclamation, his boss, Secretary of Defense Robert McNamara, moved significantly in the ExComm discussions against the whole idea of an invasion. McNamara not only argued in favor of the blockade option, but also for trading the missiles in Turkey for the missiles in Cuba. 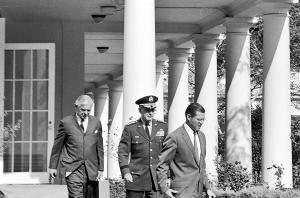 According to Sheldon Stern’s account (p. 133), relying on the detailed notes taken by National Security Council staffer Bromley Smith, McNamara told Kennedy “there were differences among his advisers which had resulted in the drafting of alternative courses of action.” The defense secretary openly endorsed the “blockade route” as a first step toward the removal of the missiles—a step less likely to provoke a Soviet response “leading to general war”—plus negotiations for “the withdrawal of United States strategic missiles from Turkey and Italy.” Then McNamara went even further, suggesting an “agreement to limit our use of Guantanamo to a specified limited time.”