Notes on October 21, 1962 Meeting with the President [Minutes of Briefing on U.S. Air Attack and Invasion Plan]

These two pages of Top Secret single-spaced notes, written and signed by Defense Secretary Robert McNamara, detail the White House military briefing on October 21, the day before the President’s speech announcing the presence of the missiles in Cuba and the imposition of a quarantine—not an air strike, as so many of his advisers had recommended.

The meeting took place in the Oval Room of the residence, rather than the Cabinet Room, as a kind of disguise against the increasing media attention to all the high level officials coming and going. The downside for historians is that the meeting was therefore not taped; but the notes taken by McNamara, one of five people in the room, are succinct and telling.

The notes show the head of the Air Force Tactical Air Command, General Walter Sweeney, describing the hundreds of sorties that would hit Cuba on the first day, but also admitting that he couldn’t guarantee they’d take out all the missiles: “[H]e was certain the air strike would be ‘successful’; however, even under optimum conditions, it was not likely that all the known missiles would be destroyed.” In other words, a single one could very well survive the air strikes and be launched—in which case, boom goes Atlanta.

JFK had raised this possibility in the very first ExComm meeting, on October 16, and now the missile deployment was even more advanced. So the Sweeney briefing was a turning point for JFK, who then ordered Ted Sorensen to work up a quarantine speech, not one announcing air strikes. 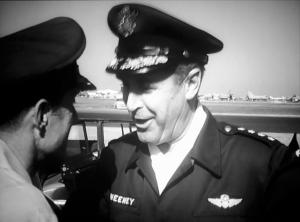 Sweeney’s refusal to guarantee that air strikes would destroy all the Soviet missiles in Cuba was more than justified. In the intelligence retrospective produced after the missiles returned to the Soviet Union, the CIA had to admit that all the high-level and low-level spy plane flights had only identified 33 of the 42 medium-range ballistic missiles that the Soviets had deployed, meaning that the massive U.S. strikes contemplated would have left as many as nine nuclear weapons available for launch.

By the end, the discussion on October 21 turned to the President’s brother Bobby (speaking perhaps on behalf of JFK), who said he opposed the air strike for two reasons: the similarity to what the Japanese did at Pearl Harbor, and the “unpredictable” Soviet response that could “lead to general nuclear war.”

The next day, at a meeting captured on the ExComm tapes, Kennedy tells his advisers that “the idea of a quick strike was very tempting, and I really didn’t give up on that until yesterday morning” after hearing from General Sweeney.