No equivalent of the Kennedy tapes exists on the Soviet side. But after the end of the Cold War, Russian archives released notes of Khrushchev’s Presidium (Politburo) sessions; and those for October 1962 remain particularly fascinating, even though they are summaries, almost bullet points, rather than verbatim. The notetakers were Vladimir Malin, head of the Party’s general department, and one of his subordinates, Aleksei Serov, who both contributed to the notes of the pivotal October 22-23 meeting of the Presidium.

On October 22, Soviet diplomats warned Moscow that Kennedy was about to deliver a prime-time speech at 7 p.m. Washington time, likely about Cuba. The seven-hour time difference between Moscow and Washington, D.C., meant that the Presidium actually convened at 10 p.m., before Kennedy started to speak, and did not have the text of Kennedy’s speech until the next morning’s session, starting at 10 a.m. on the 23rd.

Khrushchev’s first reaction, before reading the speech, was to assume an invasion was coming. He comments frankly, “The point is that we do not want to unleash a war, we wanted to intimidate and restrain the USA vis-à-vis Cuba. The difficult thing is that we did not concentrate everything that we wanted and did not publish the treaty. The tragic thing—they can attack, and we will respond. This could escalate into a large-scale war.” Publishing the Cuba-USSR defense treaty, which would have gone into effect as soon as the missiles were operational, was exactly what the Cubans had proposed in the summer, and Khrushchev had rejected, in favor of total secrecy and deception. 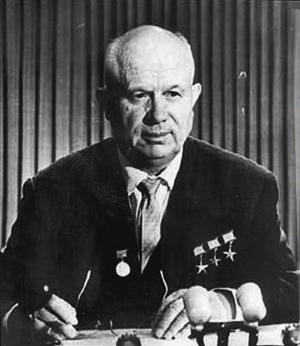 Khrushchev was a mix of bluster and caution before learning that Kennedy had announced a blockade. As the Soviet leader outlines various scenarios for a U.S. attack on Cuba, the notes reflect his determination to “not yet use the strategic weapons, but use the tactical.” But the next morning (see the next page of the notes, just after defense minister Rodion Malinovsky’s comment about waiting until 1 a.m.), Khrushchev steps back from the brink. The Soviet ships that were close to Cuba would go ahead to port, including the Alexandrovsk, with all its nuclear warheads, but the others were to turn around and come back to the USSR.

The parallels between Kennedy and Khrushchev stand out in these notes from October 22 and 23. Just as JFK opts for a quarantine rather than the air attack that the majority of his advisers wanted, Khrushchev admits he was only “halfway successful” and decides to pull back further shipments: “we do not want to unleash a war.”