The most iconic quote from the Cuban Missile Crisis appeared in a Saturday Evening Post retrospective weeks afterwards, describing a confrontation at the blockade line between U.S. warships and missile-carrying Soviet freighters in which the Soviet ships backed off. The article quoted Secretary of State Dean Rusk saying, on October 24, “We’re eyeball to eyeball, and I think the other fellow just blinked.”

In fact, the confrontation never happened. Michael Dobbs, author of One Minute to Midnight, put together Soviet shipping records and U.S. intelligence reports, along with U.S. Navy charts obtained by the National Security Archive, to prove that the Soviet ships supposedly involved actually had turned around the day before (October 23) and were 500 miles away at the time of the Rusk quotation. 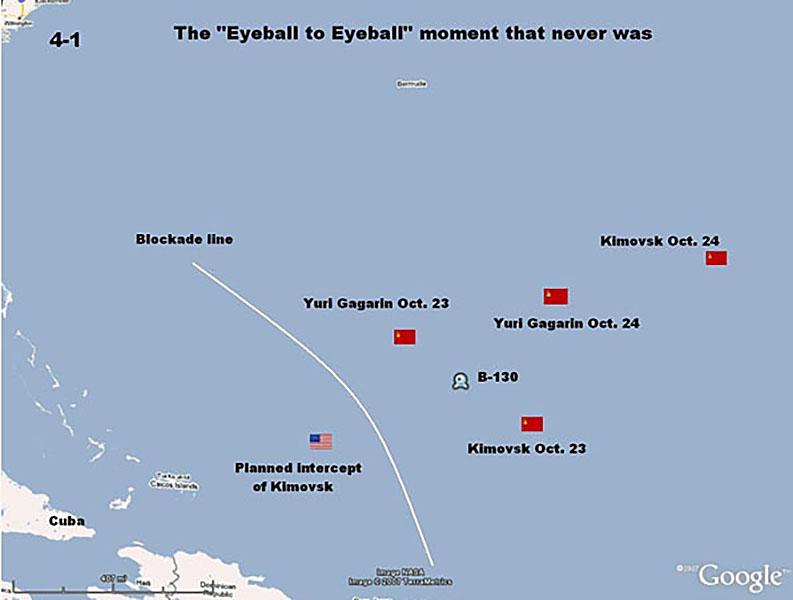 As Dobbs pointed out, the claim that Soviet missile-carrying ships turned back at the last moment after being confronted by American warships has appeared in many missile crisis books, including Robert F. Kennedy’s posthumous memoir Thirteen Days (1968), One Hell of a Gamble by Timothy Naftali and Aleksandr Fursenko (1997), and Essence of Decision by Graham Allison and Philip Zelikow (2nd edition, 1999). The image of a successful eyeball-to-eyeball confrontation was also the emotional centerpiece of a Hollywood movie on the missile crisis, Thirteen Days (2000), and continues to influence the conduct of American foreign policy.

But Soviet leader Nikita Khrushchev had ordered his missile-carrying ships to turn around more than 24 hours before, on the morning of October 23, soon after Kennedy went on nationwide television to announce the discovery of Soviet missiles in Cuba and the imposition of a U.S. quarantine line around the island. According to Soviet documents and shipping records reviewed by Dobbs, Khrushchev permitted five ships already close to Cuba to proceed. Since these ships were only a few hours’ sailing time from the closest Cuban port, there was little risk that they would be intercepted by U.S. warships.

The ships included the Aleksandrovsk, which was carrying nuclear warheads to Cuba, and its escort ship, the Almetyevsk, which arrived at the port of La Isabela at dawn on October 23. The three other ships were the Divnogorsk, the Dubno, and the Nikolaevsk. The Soviet leader also ordered four submarines armed with nuclear torpedoes to remain in the vicinity of the quarantine line. Ships and oil tankers carrying non-military equipment were authorized to proceed to Cuba.

According to Soviet records, the orders to 16 missile-carrying ships to reverse course went out early in the morning of October 23. A senior U.S. Navy officer, Captain Isaac Kidd, later noted, “the Russian ships turned around at 230800A.” The time group is equivalent to 3 a.m. Eastern Daylight Time in Washington or 10 a.m. Moscow time on October 23. 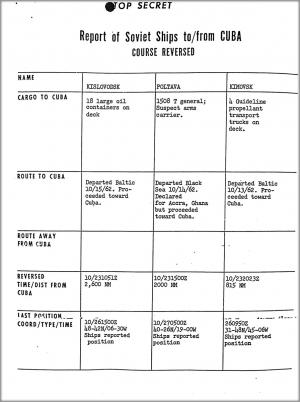 The Soviet ships closest to the quarantine barrier were the Kimovsk (not the Komiles, as RFK incorrectly stated in his memoirs) and the Yuri Gagarin. According to Bobby Kennedy, the U.S. Navy was expecting to make contact with the Kimovsk between 10:30 a.m. and 11 a.m. Washington time on October 24. The National Security Agency had been receiving preliminary reports of Soviet ships turning around throughout the night, but the evidence was inconclusive, and the agency did not inform Navy Flag Plot of the development until 10:40 a.m.

When President Kennedy heard the news, he immediately ordered the aircraft carrier Essex not to engage the Soviet ships and to give them time to turn around. The Essex was contacted by sideband radio between 10:45 and 11 a.m.

In fact, both the Kimovsk and the Yuri Gagarin were already more than 500 nautical miles from the blockade line at this point, heading back toward the Soviet Union. One Minute to Midnight was the first book to plot the actual positions of Soviet and U.S. ships on October 23 and 24, and Dobbs published the relevant maps, charts, and intelligence intercepts on the National Security Archive website in 2008.