Soviet leader Nikita Khrushchev made a show of business as usual after John F. Kennedy’s announcement on October 22 of the discovery of missiles in Cuba and the imposition of a quarantine. Khrushchev actually attended the Bolshoi Theater the next night for the opera Boris Godunov and raised a glass of champagne with the American bass singer Jerome Hines.

Meanwhile, in Cuba, Soviet crews were racing to make all the missile sites operational and to prepare for the expected American invasion, while U.S. Navy planes flew low-level flights just above the palm trees photographing all the activity. At the San Cristobal No. 1 site, where missiles were first identified, new low-level photos showed prefabricated concrete arches coming together into a “probable” nuclear warhead bunker.

On October 24, Khrushchev learned that a leading American capitalist, the head of Westinghouse Electric’s international division, was in Moscow negotiating potential trade arrangements with the Soviet Union. William E. Knox had organized Westinghouse deals with the Soviet Amtorg Trading Company 20 years before, when the U.S. and the USSR were allies against Hitler; but his knowledge of the Soviet Union was sufficiently limited that he didn’t recognize the bearded fellow in a portrait on Khrushchev’s office wall when the Soviet leader called Knox in to talk, on an hour’s notice. (Karl Marx would have termed Knox part of “the ruling circles” in the U.S., who pulled the strings of elected leaders.) 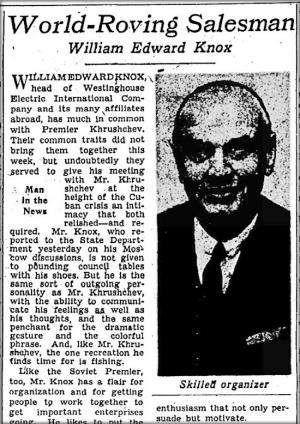 According to Knox’s debriefing from the October 24 meeting with Khrushchev, which lasted for three hours (!), the Soviet leader said Kennedy’s speech must “stem from hysteria,” that the Soviet ships were unarmed, that the blockade was “illegal” verging on “piracy,” but also that the U.S. “is now unable to take over Cuba.” To Knox’s comment that the problem was the Soviets had lied to Kennedy, Khrushchev launched into a half-hour discussion of why the missiles were defensive, not offensive. 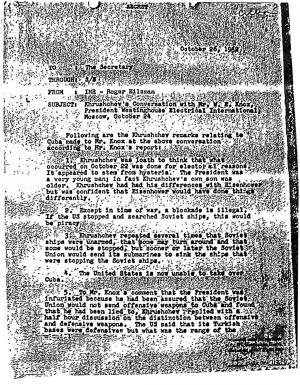 The first page of the document

“Khrushchev then stated specifically that the Soviet Union had an anti-aircraft missile [sic] in Cuba as well as ballistic missiles with both conventional and nuclear warheads…. They would never be fired except in defense of Cuba and then only on the personal instructions from Khrushchev.”

Knox reported, “Khrushchev added that if the United States did not believe this it should attack Cuba and it would find out the answer. Guantanamo would disappear the first day.” The author Michael Dobbs identified this warning as a direct allusion to the Soviet short-range cruise missiles that would be targeting the U.S. Navy base.

Knox’s Kremlin conversation made him a celebrity beyond the usual industrial circles. The New York Times headlined Knox as a “World Roving Salesman” in the October 27, 1962, paper, and later commissioned a magazine article from him about the dramatic meeting with Khrushchev.

Michael Dobbs, from Office of the Secretary of Defense, Cuba Files, NARA.