Memorandum from Malinovsky and Zakharov on deployment of Soviet Forces to Cuba, 24 May 1962

This remarkably detailed deployment plan for the extraordinary Soviet missile buildup in Cuba in 1962 only emerged from Soviet archives after the end of the Cold War. The lead author of this plan, General Anatoly Gribkov, described its components at the historic 1992 Havana conference, to the absolute shock of the American delegation, when Gribkov mentioned, in a matter-of-fact way, the 80 tactical nuclear weapons included in the plan from the beginning. 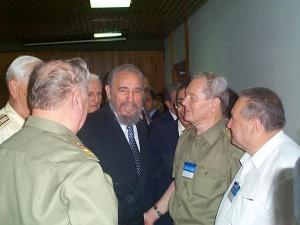 Fidel Castro reunites with Soviet veterans of 1962 at 40th anniversary conference in Havana. Castro is shaking hands with Gen. Anatoly Gribkov, operation planner. On the left, back to camera, is Marshall Dmitri Yazov, in 1962 the commander of a rifle regiment in Cuba. (Photo by Svetlana Savranskaya)

In 1994, Gribkov co-authored a book with retired U.S. general William Y. Smith, titled Operation Anadyr, that went into more detail (Anadyr is actually a river in Siberia, chosen as a code name to disguise the Cuban destination). Then, in 1998, Gribkov edited a volume of memoirs by Soviet veterans of 1962, providing quotations from this plan as developed by the Operations Directorate of the Soviet General Staff in May 1962, and from the Soviet Presidium (aka Politburo) as it approved the plan at meetings on May 26 and June 10, 1962.

This full copy comes from a Russian military historian, General Dmitri Volkogonov, who used his privileged position as an aide to Russian president Boris Yeltsin in the early 1990s to photocopy this plan in the General Staff Archive (and hundreds of other high-level documents). Volkogonov’s family ultimately donated his papers to the Library of Congress. The distinguished analyst Raymond Garthoff, former CIA and State Department official and retired U.S. ambassador to Bulgaria, translated this document for the Cold War International History Project in 1998. Garthoff’s expertise was especially useful in helping decode the many technical military terms included here.

The plan is laid out in a memorandum on May 24, 1962 from the Defense Minister, Marshall Rodion Malinovsky, and the head of the General Staff, Marshall Matvei Zakharov, to the chair of the Defense Council, Nikita Khrushchev. Most striking is the enormous scope of this logistical effort. Soviet ships would transport an entire Group of Soviet Forces to Cuba, with a whole ballistic missile division, coastal cruise missiles (Sopkas), 576 SAM missiles for anti-aircraft protection, a squadron of surface ships and a squadron of submarines, and much more. The level of detail includes three field hospitals, 120 dump trucks, 2000 tons of cement, and fuel and food for the entire effort.

Casually, apparently as a matter of standard operating procedure, item 6 of the plan lists the deployment most shocking to the American veterans 30 years later – the 80 tactical nuclear warheads for 16 FKR (front range cruise) missiles. With a range of 180 miles, these would have devastated any U.S. invasion force and turned the U.S. naval base at Guantanamo into another Hiroshima; yet U.S. intelligence at the time mistook the FKRs for the more conventionally armed Sopkas.