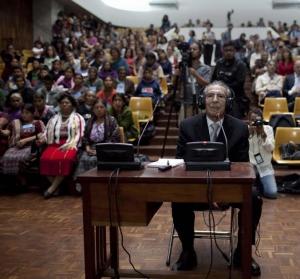 On March 23, 1982, General Efraín Ríos Montt and two other officers seized power in Guatemala through a military coup. After Ríos Montt became chief of state several months later, his regime oversaw a bloody counterinsurgency campaign targeting Mayan indigenous regions of the country in a bid to wipe out guerrilla forces and anyone who supported them, resulting in thousands of civilian deaths. Once the conflict ended, the UN-sponsored Historical Clarification Commission – drawing on U.S. and Guatemalan government archives, as well as testimonies, exhumation results, and human rights reports –  determined the military had committed “acts of genocide against groups of Mayan people” between 1981 and 1982. That conclusion convinced Guatemala’s leading Mayan activist, Nobel Peace Prize laureate Rigoberta Menchú, to file a genocide case in the National Court of Spain in 1999. The National Security Archive was asked by Menchú’s lawyers at the Center for Justice and Accountability to support the case with expert testimony and documents. Two years later, attorneys for victims and their families inside Guatemala followed suit by filing criminal genocide charges with the Guatemalan Public Ministry. Ríos Montt – along with his former intelligence chief, José Mauricio Rodríguez Sánchez – were indicted in 2012.

The historic trial took place in 2013. The prosecution focused on the command role played by the two officers in connection to fifteen massacres in the Ixil region of the country’s El Quiché department, resulting in the deaths of 1,771 unarmed men, women and children. The Archive contributed expert analysis and a collection of Guatemalan military documents, known as “Operación Sofía,” that proved central to the prosecution’s case. The two month trial ended in Ríos Montt’s conviction for genocide and crimes against humanity, and the 86-year-old former dictator was sentenced to 80 years in prison. Ten days later Guatemala’s constitutional court overturned the conviction on a technicality.

National Security Archive looks at the army's strategy behind the counterinsurgency campaign launched by Ríos Montt against the guerrillas and the civilian population suspected of supporting them.

Who is Efraín Ríos Montt? In the context of the groundbreaking genocide trial of Efraín Ríos Montt, retired army general and former dictator of Guatemala, the National Security Archive offered a brief biographic sketch and a description of the general's first months in power to provide background for understanding the man, his role as military dictator of Guatemala, and the crimes for which he was indicted and convicted.

The Pursuit of Justice in Guatemala

The National Security Archive and the North American Congress on Latin America (NACLA) marked the 30th anniversary of the coup that propelled General Efraín Ríos Montt to power and launched the most violent period of the 36-year internal armed conflict in Guatemala, with the publication of NACLA’s Report on the Americas, “Central America: Legacies of War,” containing feature article by National Security Archive’s Kate Doyle on “Justice in Guatemala.” 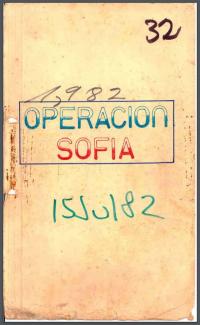 The Guatemalan army, under the direction of military ruler Efraín Ríos Montt, carried out “Operation Sophia” a deliberate counterinsurgency campaign in the summer of 1982 aimed at massacring thousands of indigenous peasants. Here, the National Security Archive presents a comprehensive set of internal records, presented as evidence to the Spanish National Court. 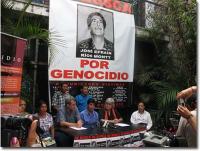 The investigative phase of the international human rights case charging three Guatemalan former military presidents and five senior army and police officials with genocide, state terrorism, torture and other crimes against humanity opened a second round of hearings on May 26, 2008, in Madrid, Spain.

A Personal Account of Testifying at a Guatemalan Genocide Trial

Guatemala’s Genocide on Trial
The Nation
(May 2013)

Rios Montt Convicted of Genocide and Crimes Against Humanity: The Sentence and Its Aftermath
(May 2013)