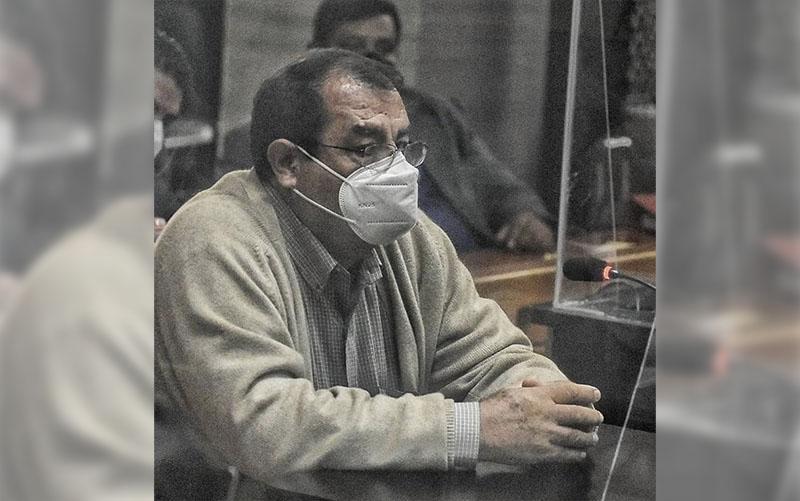 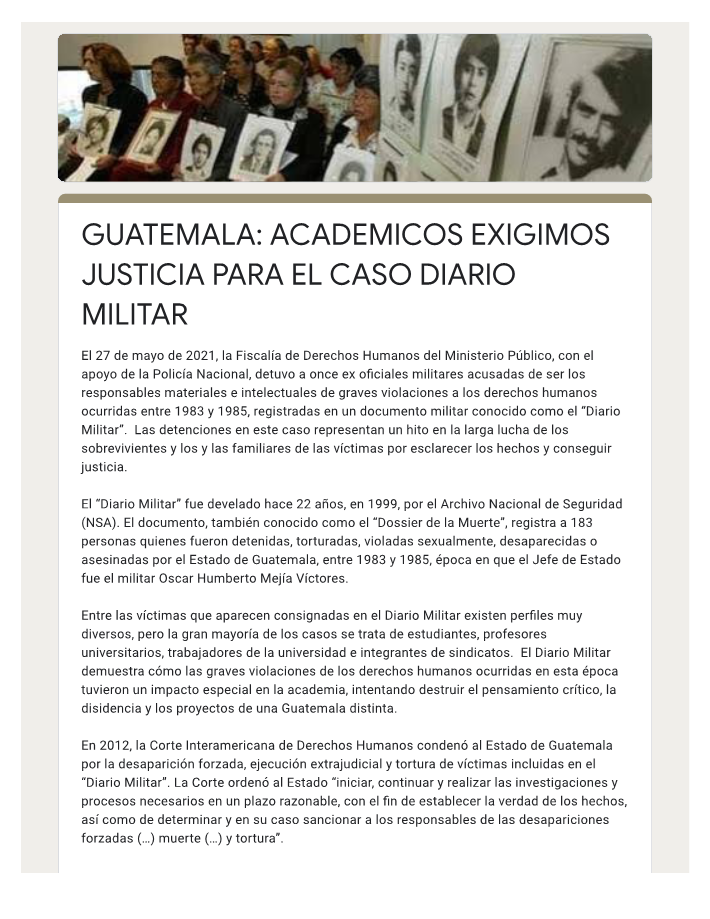 Hundreds of prominent academics from the United States, Canada, and Latin America express their solidarity with survivors and victims of the Death Squad Dossier case, calling for precautionary measures to ensure an impartial trial and protection for judicial officials involved. 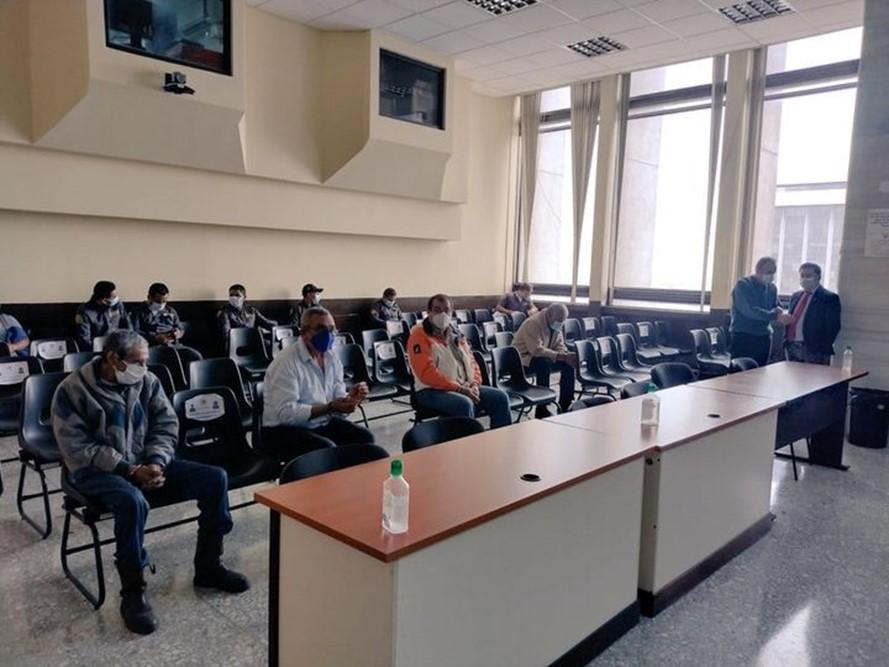 Washington, D.C., June 4, 2021—Twenty-two years after the National Security Archive published the notorious “Death Squad Dossier” of Guatemala – which chronicled the kidnapping and disappearance of 183 people by government agents over a period from 1983-85 – police arrested 11 former military and security force officials on varying charges of forced disappearance, torture, rape, and assassination connected to the document.

The Associated Press first reported the arrests on May 27. Since then, the defendants’ arraignment hearings have begun and a twelfth suspect has been detained.

The Dossier, or Diario Militar (Military Logbook), is a collection of military intelligence and police records documenting the Guatemalan regime’s use of clandestine detention, torture and death to target people perceived as leftists and enemies of the state. Entries in the logbook describe the capture by security forces of 183 men, women and several children, and contain photographs of the victims, the dates and locations of their seizure, their alleged connection to guerrilla groups, and in half of the cases codified references to their secret executions. Although the crimes took place in the mid-1980s at the height of the 36-year armed civil conflict, the Military Logbook was smuggled out of Guatemala and given to the National Security Archive in 1999, more than two years after peace accords ended the war and shortly after a truth commission or “Historical Clarification Commission” issued its groundbreaking report.

Since then, families of the Military Logbook’s disappeared have repeatedly called for an investigation into the crimes depicted in the document and a search for the remains of their loved ones. There have been advances in the intervening 22 years. In 2005, the Historical Archive of the National Police was discovered and many thousands of records located in it that confirmed police and military involvement in the Diario Militar kidnappings. With the help of the logbook’s entries, forensic anthropologists were able to identify the skeletal remains of six of the logbook’s victims, beginning in 2011. And in 2012, the Inter-American Court for Human Rights ruled that Guatemala was responsible for crimes associated with the Diario Militar and ordered the State to determine who committed them, locate the victims’ remains, provide psychological support to families, and various reparations.

Despite these and other advances, the Guatemalan government’s investigation into the case stalled for years – until the Public Ministry last week announced surprise police raids on 17 homes and the capture of eleven suspects. They are:

The highest ranking among them is retired General Marco Antonio González Taracena, former chief of the intelligence and operational unit known as the Archivo, which is believed to have worked hand-in-hand with police and the Guatemalan Intelligence Directorate (D-2) to carry out the Diario Militar operations. After arraignment hearings began on June 1, a second retired army officer, (Col.) Jacobo Esdras Salán Sánchez, entered the courtroom of Judge Miguel Ángel Galvez to turn himself in. He was arrested, becoming the twelfth defendant in custody for the Diario Militar crimes. As of this writing, five suspects remain in hiding and are considered fugitives.

On Monday, June 7, Vice President Kamala Harris will meet Guatemala’s President Alejandro Giammattei in Guatemala City. According to a Harris adviser, they plan to discuss “ways to increase economic opportunities in Guatemala, strengthen the rule of law and deepen bilateral law enforcement cooperation.” In May, Harris was briefed on the challenges of injustice and impunity in Guatemala by four women who would know: former attorneys general Thelma Aldana and Claudia Paz, Judge Claudia Escobar and former Supreme Court Justice Gloria Porras. The jurists have all faced physical and legal threats because of their work; three of them now live in exile.

While the two world leaders talk next week, the pre-trial hearings of the Death Squad Dossier case will resume before Judge Galvez. Families who have waited since the mid-1980s for information about what happened to their beloved mothers, fathers, sisters, brothers, children, friends and colleagues will gather in the courtroom in person or watch the proceedings as they livestream, hoping for truth and the satisfaction that only justice can bring. 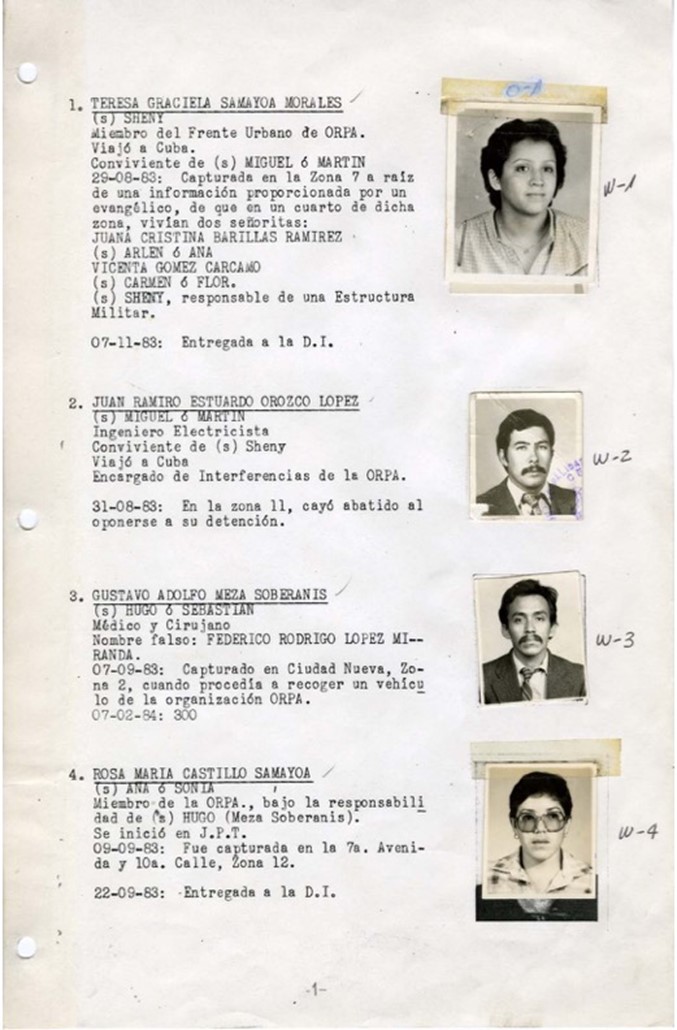 The Atrocity Files Deciphering the archives of Guatemala’s dirty war

Update: The Guatemalan Death Squad Diary and the Right to Truth