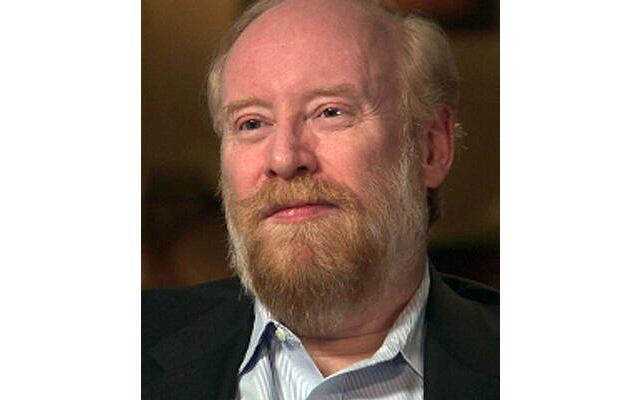 An Independent Historian and a Visiting Research Fellow 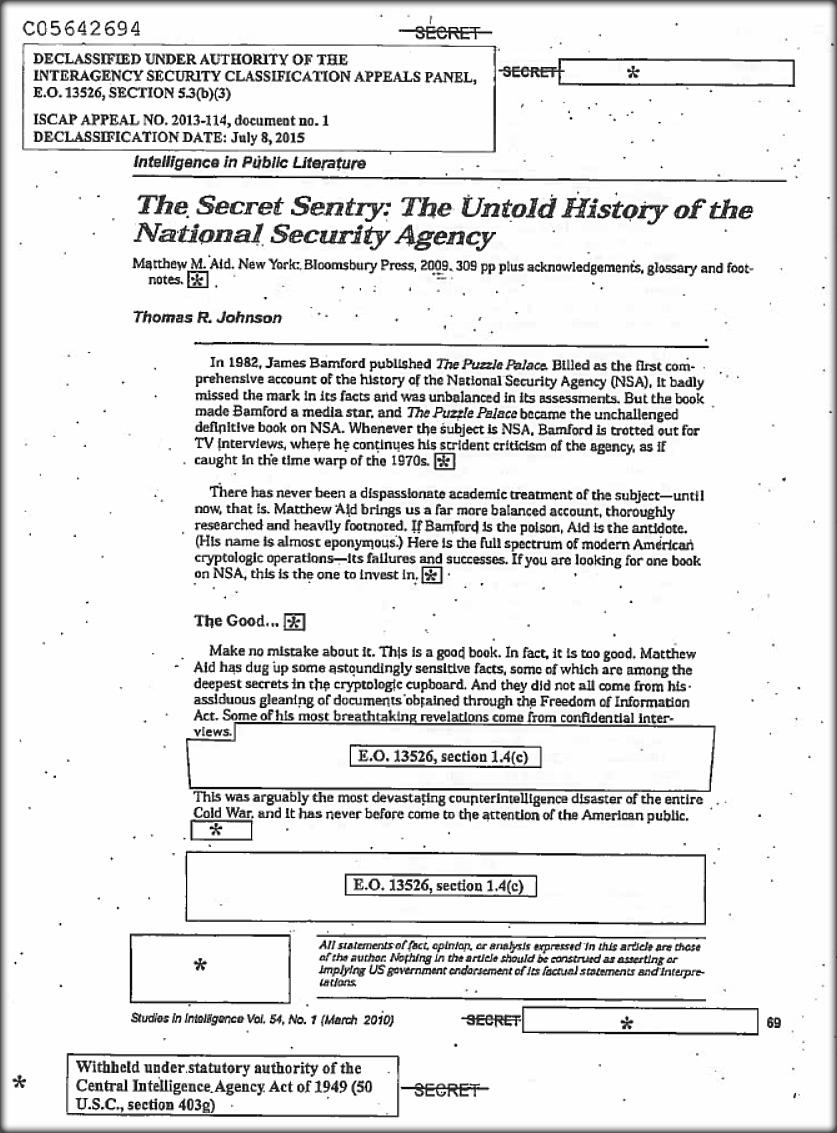 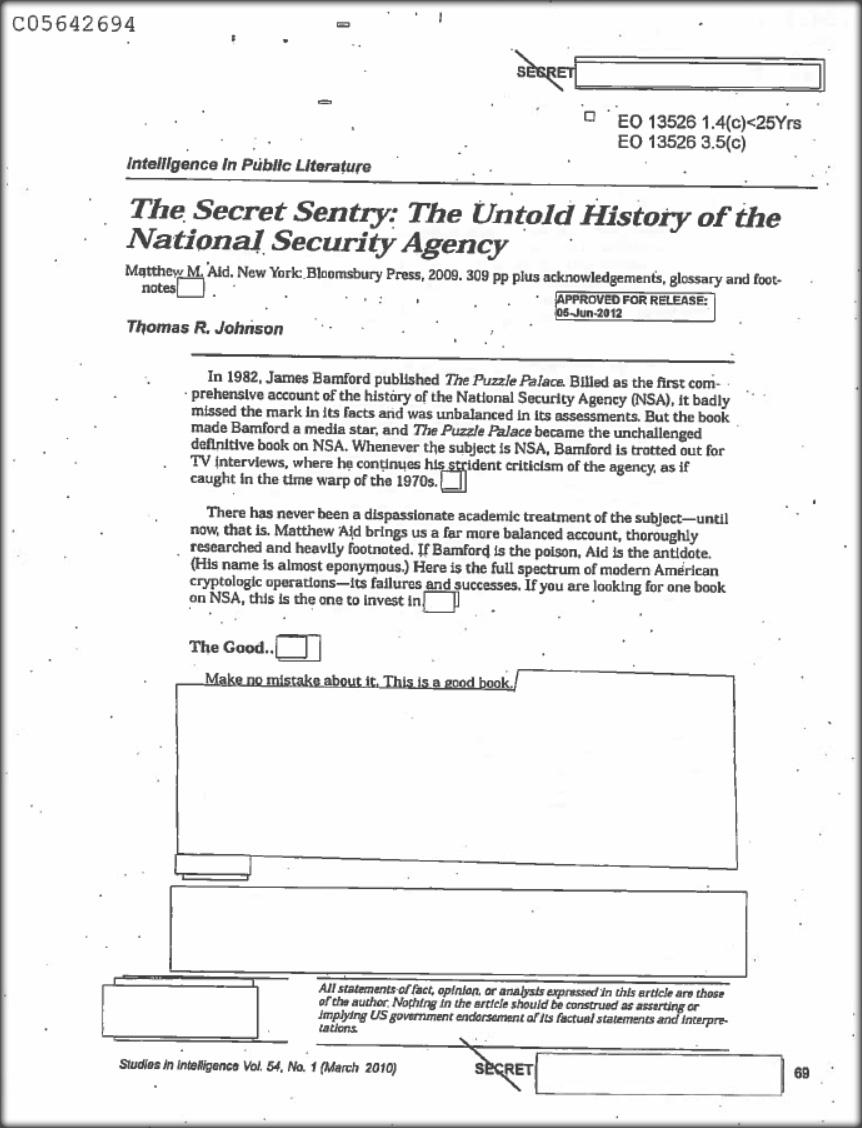 Washington, D.C., September 10, 2018 –  Staffers at the National Security Archive were saddened by the news of Matthew Aid’s untimely passing on August 20, 2018.  We had the good fortune to work with Matthew and benefit from his decades-long efforts to uncover the secretive world of U.S. signals intelligence (SIGINT) collection.  As an independent historian, his research, including wide-ranging FOIA requests and archival sleuthing, and in-depth interviews resulted in two important books, The Secret Sentry: The Untold History of the National Security Agency and Intel Wars: The Secret History of the Fight Against Terror, published by Bloomsbury Press.  His publications and other contributions brought him well-deserved recognition as an accomplished historian of intelligence and national security policy.

Growing up in the era of Watergate and the Church Committee, and interested in military history, Matthew began making trips to the National Archives to collect recently declassified documents.  He also liked to play war games.  National Security Archive fellow John Prados recalls that when he was in graduate school at Columbia University and designing board war games as a free-lancer, he met Matthew, then a high-school student living in New York City, at a company named Simulations Publications.  Matthew agreed to playtest board games, such as Panzerkrieg, that John was developing.  Matthew shared with John recently declassified Army G-2 documents from World War II.   John writes that “I was sad when Matt left for Beloit College since he'd been one of my two best playtesters.”

Years later, in 2005, Matthew made his first contribution to the Archive when he was researching his book on the National Security Agency’s (NSA) history. Matthew had developed extensive contacts with agency staffers, who told him about a history of the Gulf of Tonkin incident that higher level officials had refused to declassify.  According to the study by Robert J. Hanyok, erroneous translations of intercepted North Vietnamese messages had been covered up and distorted by higher-level officials so that the intelligence could be used to confirm that a second attack on a U.S. ship in the Gulf in August 1964.  After Matthew learned that the study had been bottled up, he informed New York Times journalist Scott Shane who wrote about the cover up in a major story. The NSA soon declassified Hanyok’s study, which the National Security Archive published, giving Matthew full credit for his important discovery.

The next year Matthew made an outstanding contribution to transparency and open government by revealing the U.S. National Archive’s program of re-classification of records that had been in the open, declassified stacks.  As it turned out, officials at the National Archives had made secret agreements with the CIA and the Air Force giving them carte blanche to withdraw documents that they contended were still sensitive.  Matthew’s discovery of large numbers of withdrawal notices for records that had been previously available  produced a New York Times front page exposé in February 2006, a major posting by the National Security Archive, an audit by the government’s Information Security Oversight Office (ISOO), and termination of the secret program.  Present and future historians of intelligence and national security issues owe Matthew a debt of gratitude for this discovery.

Ironically, the fame resulting from Matthew’s discovery led a detractor who had once worked at NSA to send the Washington Post the results of a Freedom of Information Act (FOIA) release detailing Matthew’s Air Force court martial in 1985 for misuse of classified documents and impersonating an officer.[1] J. William Leonard, the Director of ISOO who oversaw the 2006 audit of the withdrawal of records from public access at NARA, criticized the Post for publishing negative information that “served no useful public purpose”: “it would have taken me all of two seconds to conclude that it was irrelevant to the matter at hand, as it should be to The Post and its readers.”

Matthew’s contributions to the history of U.S. intelligence and to transparency in government ended too soon. We will miss the benefit of his wide-ranging knowledge on intelligence and nuclear weapons records at the National Archives. We are glad that we had him as a friend and colleague.

To the Archive, Matthew made direct and outstanding contributions. He authored, co-authored or contributed to several postings on our website, prepared postings alerting readers about his books, and served as project director and co-director of two document sets for the Digital National Security Archive (DNSA) database.  Here are links to items that illustrate Matthew’s contribution:

Tonkin Gulf Intelligence "Skewed" According to Official History and Intercepts

INTEL WARS The Lessons for U.S. Intelligence From Today's Battlefields

Electronic Surveillance and the National Security Agency: From Shamrock to Snowden

[1] Matthew did not dispute the episode though he later described it as less serious than it might have appeared – he had full clearances to view the classified documents but had inappropriately taken them home, and in the second instance had simply been “trying to impress” a young woman.

A declassified review of The Secret Sentry by NSA historian Thomas R. Johnson, originally published in 2010 by the CIA internal publication Studies in Intelligence, serves as a tribute to the value of Matthew Aid’s work. While Johnson had his criticisms, his basic judgment was that “This is a good book.” Noting that it was a “balanced account, thoroughly researched, and heavily footnoted,” Johnson advised his readers: “if you are looking for one book on NSA, this is the one to invest in. “While Matthew did not have access to classified sources, his background in Air Force SIGINT enabled him to “read between lines and [come] to some remarkably accurate conclusions.”

Two different excised versions exist of the Johnson review.  In response to a mandatory declassification review request by Archive FOIA coordinator Nate Jones, the CIA released an excised version that Jones appealed to the Interagency Security Classification Appeals Panel (ISCAP). In 2015, ISCAP declassified more information, including a reference on the first page to Matthew’s account of the “most devastating counterintelligence disaster of the entire Cold War.”  ISCAP affirmed CIA’s excision of what exactly that disaster was, but it is likely a reference to the “massive damage” caused by former NSA official Ronald Pelton.  According to Aid’s account, in 1980, after being forced to resign from the Agency, the bankrupt Pelton sold to the Russians, for $35,000, what one official called the “Holiest of Holies”: the “seven most highly classified compartmentalized intelligence operations,” including “the ability of NSA’s Vortex SIGINT satellites to intercept sensitive communications deep inside the USSR that were being carried by microwave radio-relay systems.”  in Moscow.”  In addition, the Soviets learned about “about virtually every Russian cipher machine that NSA’s cryptanalysts in A Group had managed to crack in the late 1970s,” which explained why the NSA suddenly could not get access to Soviet and Polish communications systems during the 1980-1981 Polish crisis.