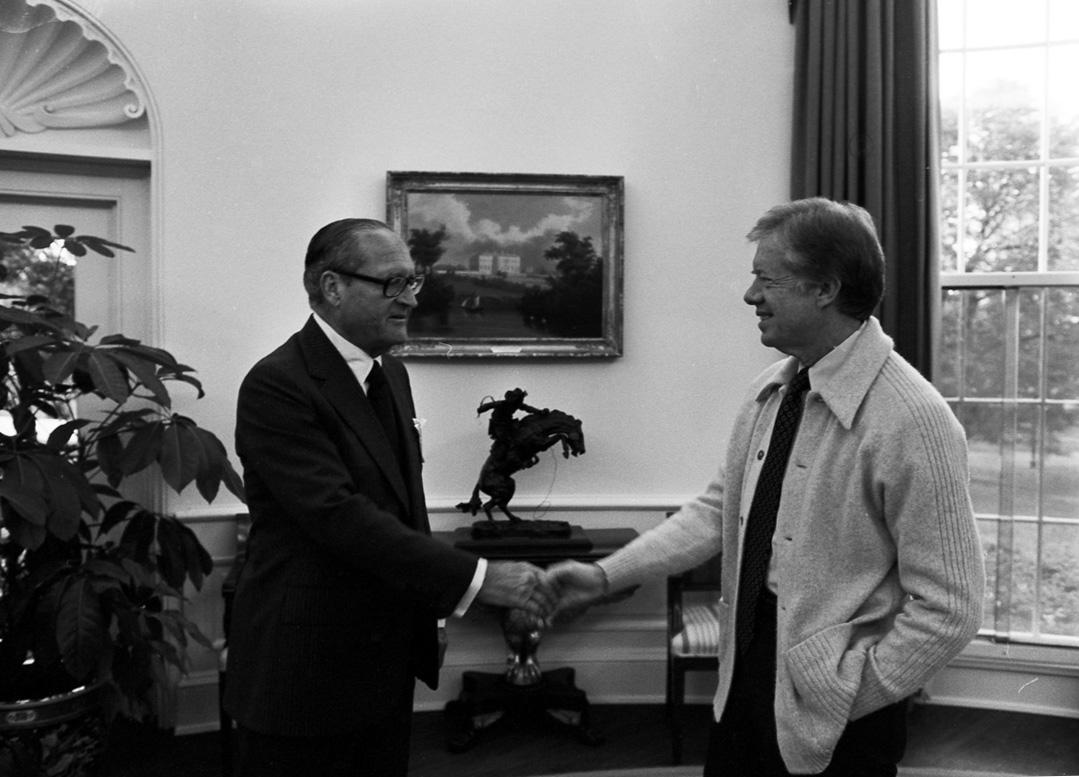 Ambassador Gerard C. Smith, responsible for nonproliferation policy during the Carter administration, meeting with President Jimmy Carter, 24 October 1979.  Concerned about U.S.-Japan diplomatic relations, Smith wanted Japan to have more leeway in reprocessing spent nuclear reactor fuel so that it could develop fast breeder reactors, although some worried that that would lead to mounting plutonium surpluses (Photo courtesy of Jimmy Carter Presidential Library)

Washington D.C., August 1, 2018 - On 31 July 2018, the Japanese Atomic Energy Commission announced that “Japan will reduce the size of its plutonium stockpile.” The move marks a potential turning point on an issue that has carried difficult and troubling implications for nuclear nonproliferation policy. For years, the JAEC has been operating reprocessing facilities to turn spent reactor fuel into plutonium for use in fueling reactors. A new reprocessing facility in the works at Rokkasho would produce even more plutonium, but the surpluses of plutonium accumulated far beyond any need for reactor fuel.  The surpluses have raised concern for years about the vulnerability of plutonium stocks to terrorism and Japanese nuclear weapons potential, but also unease that a reprocessing program had been setting a bad precedent internationally.

What the JAEC announcement means in practice is unclear but according to a Reuters story, pressure from China and the United States had an impact on Japanese decision-making. Other sources indicate that Foreign Minister Tarō Kōno played a key role in pushing a policy change forward (suggesting the role of international influence).  In any event, that the U.S. may have shown concern to Japan is consistent with the more critical perspective on reprocessing that developed during the Obama presidency and that the current administration has continued.

In 2017, the National Security Archive contributed to the policy discussion by publishing documents from the late 1970s and 1980 (see below), which presented the debate within the Carter administration on Japanese reprocessing. While some senior officials wanted to give Tokyo license to reprocess using U.S.-supplied uranium—which became official U.S. policy during the Reagan administration--others argued that Japan would develop plutonium surpluses far beyond what could be used as reactor fuel. The publication of the U.S. documents received extensive media attention in Japan, including Japan Times and inspired a major article in The Bulletin of the Atomic Scientists.

Forty years of impasse: The United States, Japan, and the plutonium problem
Bulletin of the Atomic Scientists
September 3, 2017