Reproduction of ODNI’s “IC on The Record” communiqué of December 12, 2016

This is a reproduction of ODNI’s “IC on The Record” communiqué of December 12, 2016, regarding the U.S. government’s Argentina Declassification Project. The nongovernmental National Security Archive created this copy in order to provide easier access for readers and to fix faulty links.

To return to the National Security Archive posting, click here. 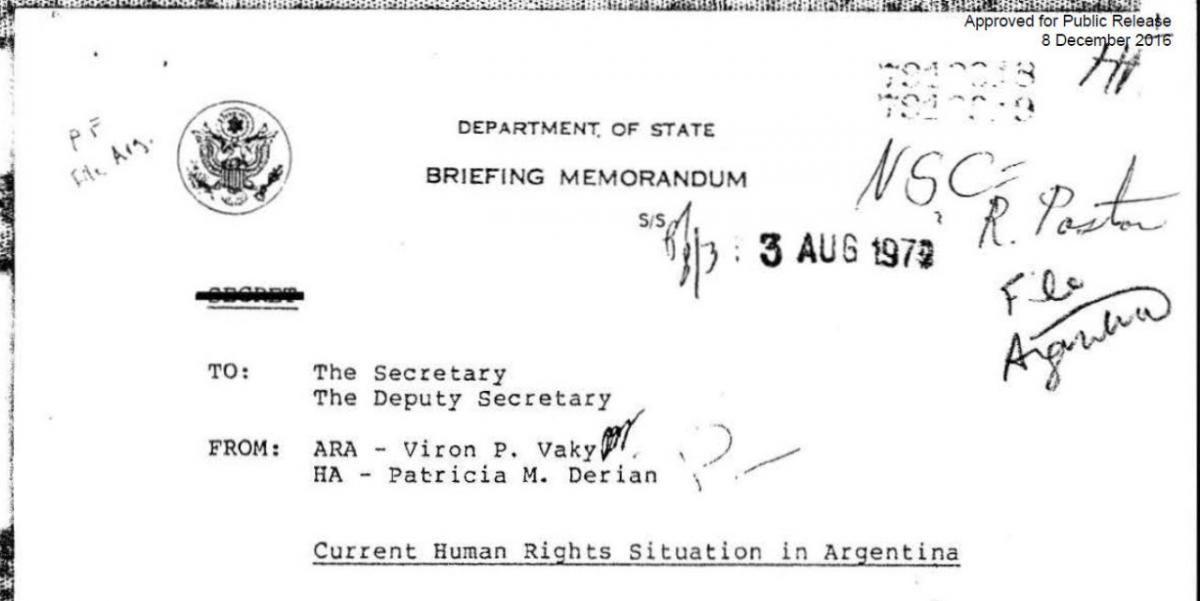 During his landmark visit to Argentina in March, President Obama announced that the U.S. Government would declassify records relating to human rights abuses under Argentina’s 1976-1983 dictatorship. At a ceremony commemorating the victims of these human rights abuses, held on the 40th anniversary of the 1976 coup d’etat, President Obama committed to releasing relevant records from across the Executive branch, including for the first time records from U.S. intelligence, law enforcement, and defense agencies. “I believe we have a responsibility to confront the past with honesty and transparency,” President Obama said at the commemoration, where he toured a memorial listing the names of victims and cast white roses in their honor into the Río de la Plata.

Today, as the Government of Argentina commemorates the life and work of former U.S. diplomat Patricia Derian, the Assistant Secretary of Human Rights and Humanitarian Affairs during the Carter administration, the U.S. Government is posting approximately 550 pages of newly declassified documents online at www.icontherecord.tumblr.com. These newly declassified documents are the second set to be released publicly following President Obama’s commitment in March. Secretary of State John F. Kerry presented the first set of documents to Argentine President Mauricio Macri on August 4 in Buenos Aires.

The documents released today were retrieved from several national security file series and collections at the four Presidential Libraries, including the Argentina Country Files, individual White House staff member files, meeting files, Presidential correspondence files, and other National Security Council files. Notably, the records from the Carter Presidential Library include documents written by Derian, who advocated tirelessly on behalf of the victims of human rights abuses in Argentina. Documents from the George H.W. Bush Presidential Library cover Vice President Bush’s meetings with Argentine officials and his visit to Argentina to attend the inauguration of President Raúl Alfonsín after democracy was restored. Significantly, the records made available today also include responsive portions from 25 President’s Daily Briefs, including for the first time PDBs from the Carter and Reagan administrations. During these administrations, the PDB was provided to the President by the Director of Central Intelligence and represented the most pressing national security concerns.

This effort is led by the Office of the Director of National Intelligence with support from the White House and involves the participation of more than 14 agencies and departments. Their work continues and additional documents will be released in 2017. To learn more about the project, visit https://www.whitehouse.gov/briefing-room/statements-and-releases.