Adzhubei’s Account to the CC CPSU of His January Visit to Washington, March 12, 1962

Khrushchev’s motivations for sending nuclear missiles to Cuba in 1962 have generated enormous debate ever since. At the time, American policymakers assumed this was a ploy to bring pressure for a Berlin settlement in favor of the Soviets; but the now-available notes from the Soviet Presidium scarcely mention Berlin. Nor do those notes explain why the Presidium took up the issue of Cuba’s defense in March, April and May 1962, after doing nothing about a Cuban request for aid for the previous six months. 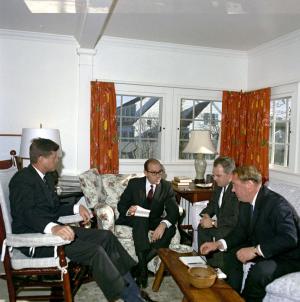 President Kennedy interviewed at his residence in Hyannis, Mass., by Alexei Adzhubei, editor of Izvestia and son-in-law of Nikita Khrushchev, on November 25, 1961 (no photo is available from the January 30, 1962, meetings). From left, JFK, his interpreter Alexander Akalovsky, and Georgi Bolshakov interpreting for Adzhubei on right). (Source: Cecil Stoughton, White House Photographs, JFK Library, ST-A1-1-61.)

One possible explanation is found in this remarkable document, a March 12, 1962, Top Secret write up by Khrushchev’s son-in-law, Alexei Adzhubei, of his conversations with President Kennedy weeks earlier, on January 30, 1962. Adzhubei had previously (November 25, 1961) interviewed Kennedy for Izvestia, but the January meetings were not for publication, just for communication.

The Russian historian Alexander Fursenko and the Canadian historian Timothy Naftali first wrote about this discussion in their One Hell of a Gamble volume in 1997, a book based on unique access to Soviet materials. But the full document was not available until a major declassification in Moscow in April 2002, after which it was translated and published by the National Security Archive in October 2002 for the 40th anniversary conference in Havana.

Adzhubei remarkably had two conversations with the President on January 30, one over breakfast at the White House with the First Lady, her sister, GRU officer Georgi Bolshakov (Adzhubei’s translator), and his wife; then one at the end of the day, courtesy of a car sent by the White House. A top editor at the Soviet newspaper Izvestia, Adzhubei is described by brother-in-law Sergei Khrushchev, in his 2000 book Nikita Khrushchev and the Making of a Superpower, as hard-drinking and ambitious, dependent on (but resentful of) his father-in-law, but also willing to publish Yevgeny Yevtushenko’s controversial poem about Stalin’s heirs.

Here, the bulk of Kennedy’s remarks focus on Germany, having earlier assured Adzhubei that “we will not meddle with events in Cuba” and “we are not planning an invasion of Cuba.” But Adzhubei was most struck by Kennedy’s comparison of Cuba to Hungary, where Khrushchev had presided over a violent crackdown in 1956. Adzhubei related this to his father-in-law orally, and later wrote up this record, in which the Hungary reference suggests to a Soviet audience that the next time the U.S. dealt with Cuba, it would be a full invasion. Both Cuban and Soviet intelligence were reporting in early 1962 an upswing in U.S. covert operations directed against Cuba as well.

Fursenko and Naftali conclude, “After Kennedy compared Cuba to Hungary in a private talk with Khrushchev’s son-in-law, whatever hope there might have been that this administration might tolerate a communist country off American shores evaporated.” Khrushchev himself in his dictated memoirs (Khrushchev Remembers, 1970, pp. 493-494) said, “The main thing was that the installation of our missiles in Cuba would, I thought, restrain the United States from precipitous military action against Castro’s government. In addition to protecting Cuba, our missiles would have equalized what the West likes to call ‘the balance of terror.’” 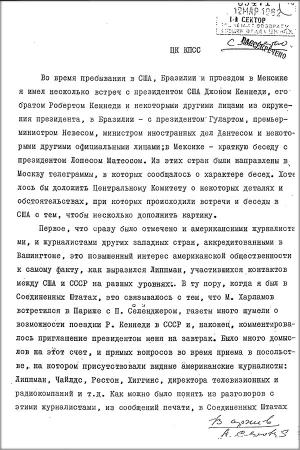 The Russian original first page, classified Top Secret, of Adzhubei's report to the Central Committee on his conversations with President Kennedy on January 30, 1962. Adzhubei had reported key parts orally to his father-in-law, Nikita Khrushchev, but only produced this write up on March 12, 1962. Forty years later, in April 2002, the Archive of the President of the Russian Federation declassified this text, and the National Security Archive translated and published the document for the 40th anniversary conference in Havana in October 2002.

So the Adzhubei memo becomes part of the incentive in March and April 1962 when the Soviet Presidium takes up the issue of helping Cuba’s defense, even though a Cuban request had been sitting there for months. The Presidium decides to send coastal cruise missiles and SAMS; then in May, signs off on Khrushchev’s plan to send ballistic missiles and a full group of forces. According to Fursenko and Naftali, Khrushchev expressed his core idea to defense minister Rodion Malinovsky, “why not throw a hedgehog at Uncle Sam’s pants?”

The Fursenko and Naftali account speculates about Khrushchev seeking a “meniscus”—pouring liquid up to the spilling point to raise the pressure and raise the stakes in foreign relations. As William Taubman relates in his gold-standard biography of Khrushchev, missile deployment in Cuba accomplished several things simultaneously. The Soviets came to the defense of Cuba, first of all, while at the same time giving the Americans a taste of their own medicine, just as they lived with the missiles in Turkey. The deployment also showed Khrushchev taking the offensive internationally—not least against claims from the Chinese Communists about Soviet weakness—and partially made up for the strategic imbalance, at that point about 4-1 in the U.S. favor (and as high as 17-1 by some measures).

Archive of the President of the Russian Federation (APRF), Moscow, Special Declassification, April 2002; Translated by Adam Mayle for the National Security Archive.