About the Southern Cone Documentation Project

Working with partners in Argentina, Uruguay and Paraguay, the Southern Cone Documentation aims to document past U.S. policies in support of dictatorships in the Southern Cone as well as how different U.S. administrations grappled with massive human rights violations under those regimes. Through numerous postings featuring historically significant U.S. declassified records, the project since 2002 has uncovered numerous important episodes and facts, including Henry Kissinger’s approval of the Argentine military's illicit conduct, and Assistant Secretary of State for Human rights Patt Derian's handling of Kissinger’s legacy by pushing the military to end massive abuses while simultaneously attempting to align U.S. intelligence activities with the Carter administration’s human rights policy.

In 2001, the project started working with the Supreme Court of Paraguay to help preserve the Archive of Terror and to provide improved access for researchers and human right investigators. The “Memoria Historica, Democracia y Derechos Humanos” program has since been able to digitize the full 300,000 documents of the Archivo del Terror, and catalog the 60,000 documents most likely to support judicial proceedings. In creating this digital archive both in Paraguay and online, the Archivo del Terror [now under the Museo de la Justicia] has been able to increase greatly the responses to requests from public researchers, journalists, historians, prosecutors and judges. The Supreme Court has entrusted the National Security Archive to conduct in-house digital research in the Archive of Terror to help clarify human rights violations in Paraguay and the region subject to Operation Condor, the repressive cooperation between Argentina, Chile, Brazil, Paraguay, Uruguay and Bolivia during the 1970s.

Working with our colleagues at the Centro de Estudios Legales y Sociales in Buenos Aires, the project was able to contribute to the declassification of about 5,000 U.S. Department of State documents in 2002, and obtain another 3,000 through hundreds of Freedom of Information Act (FOIA) requests to U.S. agencies over the years. Currently, we are supporting the declassification of pertinent documents from U.S. intelligence agencies as announced by the Obama administration in March 2016 and continued by the Trump administration in 2017.

In December 2006, Osorio presented documentary evidence in the case against former Uruguayan President Juan María Bordaberry for subversion of the constitution. The project has cooperated with human rights workers and activists in Uruguay in order to obtain large-scale declassifications of records on human rights violations under the military regime in that country.  Additionally, the National Security Archive has worked with historians and victims to gather testimonies. One continuous line of research relates to the Nixon Administration’s support for the military junta, the weakening of democratic institutions and the Dan Mitrione case.

In May 2016, Osorio introduced documentary evidence and presented testimony in the Operation Condor trial in Rome, Italy. This case involves victims from Argentina, Chile, and Uruguay as well as the former president and minister of the Interior of Bolivia, eleven high ranking Chilean military-intelligence officers, a former president, multiple army heads, two Peruvian officers, a former foreign minister and 14 Uruguayan officers. 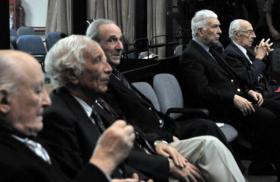