Compiled and edited by Svetlana Savranskaya and Tom Blanton

British and CIA Assessments, Presidential Letters and Summit Conversations Illuminate Perestroika and the End of the Cold War

Bush and Gorbachev and Malta
December 3, 2009

Alexander Yakovlev and the Roots of the Soviet Reforms
October 26, 2005

Washington, D.C., March 2, 2016 – Marking the 85th birthday of former Soviet leader Mikhail Gorbachev, the National Security Archive at George Washington University (www.nsarchive.org) today posted a series of previously classified British and American documents containing Western assessments of Gorbachev starting before he took office in March 1985, and continuing through the end of the Soviet Union in 1991.

The documents show that conservative British politicians were ahead of the curve predicting great things for rising Soviet star Gorbachev in 1984 and 1985, but the CIA soon caught on, describing the new Soviet leader only three months into his tenure as “the new broom,” while Ronald Reagan greeted Gorbachev’s ascension with an immediate invitation for a summit. The documents posted today include positive early assessments by Margaret Thatcher and MP John Browne, CIA intelligence reports that bookend Gorbachev’s tenure from 1985 to 1991, the first letters exchanged by Reagan and Gorbachev, the American versions of key conversations with Gorbachev at the Geneva, Reykjavik and Malta summits, German chancellor Helmut Kohl’s credit to Gorbachev in 1989 for the fall of the Berlin Wall and the end of the Cold War, and the U.S. transcript of the G-7 summit in 1990 that turned down Gorbachev’s request for financial aid.

The Archive gathered the Gorbachev documentation for two books, the Link-Kuehl-Award-winning “Masterpieces of History”: The Peaceful End of the Cold War in Europe 1989 (Central European University Press, 2010), and the forthcoming Last Superpower Summits: Gorbachev, Reagan and Bush (CEU Press, 2016). The sources include the Margaret Thatcher Foundation, the Ronald Reagan Presidential Library, the George H.W. Bush Presidential Library, and Freedom of Information and Mandatory Declassification Review requests to the CIA and the State Department.

Leading today’s Gorbachev briefing book is British Prime Minister Margaret Thatcher’s “discovery” of Gorbachev in December 1984 during his trip to Britain as head of a Soviet parliamentary delegation. In contrast to his elderly and infirm predecessors who slowly read dry notes prepared for them, Gorbachev launched into animated free discussion and left an indelible impression on Lady Thatcher. The Prime Minister, charmed by the Soviet leader, quickly shared her impressions with her closest ally and friend, Ronald Reagan. She commented famously, “I like Mr. Gorbachev. We can do business together.”

Soon after Gorbachev became the Soviet General Secretary, a Conservative member of the British parliament, John Browne, who observed Gorbachev during his visit to Britain and then followed information on Gorbachev’s every early step, compared him to “Kennedy in the Kremlin” in terms of his charisma. By June 1985, the CIA told senior U.S. officials in a classified assessment that Gorbachev was “the new broom” that was attempting to clean up the years of debris that accumulated in the Soviet Union during the era of stagnation.

But Reagan had to see for himself. For four years before Gorbachev, as the American president complained in his diary, he had been trying to meet with a Soviet leader face to face, but “they keep dying on me.” In his first letter to Gorbachev, which Vice President George H.W. Bush carried to Moscow for the funeral of Gorbachev’s predecessor, Reagan invited Gorbachev to meet. Gorbachev and Reagan became pen-pals who wrote long letters – sometimes personally dictated, even handwritten – explaining their positions on arms control, strategic defenses, and the need for nuclear abolition.

Their first meeting took place in Geneva in November 1985, where in an informal atmosphere of “fireside chats” they began realizing that the other was not a warmonger but a human being with a very similar dream—to rid the world of nuclear weapons. That dream came very close to a breakthrough during Gorbachev and Reagan’s summit in Reykjavik; but Reagan’s stubborn insistence on SDI and Gorbachev’s stubborn unwillingness to take Reagan at his word on technology sharing prevented them from reaching their common goal.

Through a series of unprecedented superpower summits, Gorbachev made Reagan and Bush understand that the Soviet leader was serious about transforming his country not to threaten others, but to help its own citizens live fuller and happier lives, and to be fully integrated into the “family of nations.” Gorbachev also learned from his foreign counterparts, establishing a kind of peer group with France’s Mitterrand, Germany’s Kohl, Britain’s Thatcher, and Spain’s Gonzalez, which developed his reformist positions further and further. By the time George H.W. Bush as president finally met Gorbachev in Malta, the Soviet Union was having free elections, freedom of speech was blossoming, velvet revolutions had brought reformers to power in Eastern Europe, and the Berlin Wall had fallen to cheers of citizens but severe anxieties in other world capitals.

German Chancellor Helmut Kohl wrote in his letter to Bush at the end of November 1989: “Regarding the reform process in Poland, Hungary, Bulgaria, the CSSR [Czechoslovakia], and not least the GDR [East Germany], we have General Secretary Gorbachev’s policies to thank. His perestroika has let loose, made easier, or accelerated these reforms. He pushed governments unwilling to make reforms toward openness and toward acceptance of the people’s wishes; and he accepted developments that in some instances far surpassed the Soviet Union’s own standards.”

In 1989, the dream of what Gorbachev called “the common European home” was in the air and Gorbachev was the most popular politician in the world. When he was faced with discontent and opposition in his country, he refused to use force, like his Chinese neighbors did at Tiananmen Square. And yet, the West consistently applied harsher standards to Gorbachev’s Soviet Union than to China, resulting in feet dragging on financial aid, credits, and trade. As Francois Mitterrand pointed out during the G-7 summit in Houston in 1990: “the argument put forth for helping China is just the reverse when we are dealing with the USSR. We are too timid […] regarding aid to the USSR. […].”

What Gorbachev started in March 1985 made his country and the world better. In cooperation with Reagan and Bush, he ended the Cold War, pulled Soviet troops out of Afghanistan, helped resolve local conflicts around the globe, and gave Russia the hope and the opportunity to develop as a normal democratic country. As with many great reformers, he did not achieve everything he was striving for – he certainly never intended for the Soviet Union to collapse – but his glasnost, his non-violence, and his “new thinking” for an interdependent world created a legacy that few statesmen or women can match. Happy birthday, Mikhail Sergeyevich! 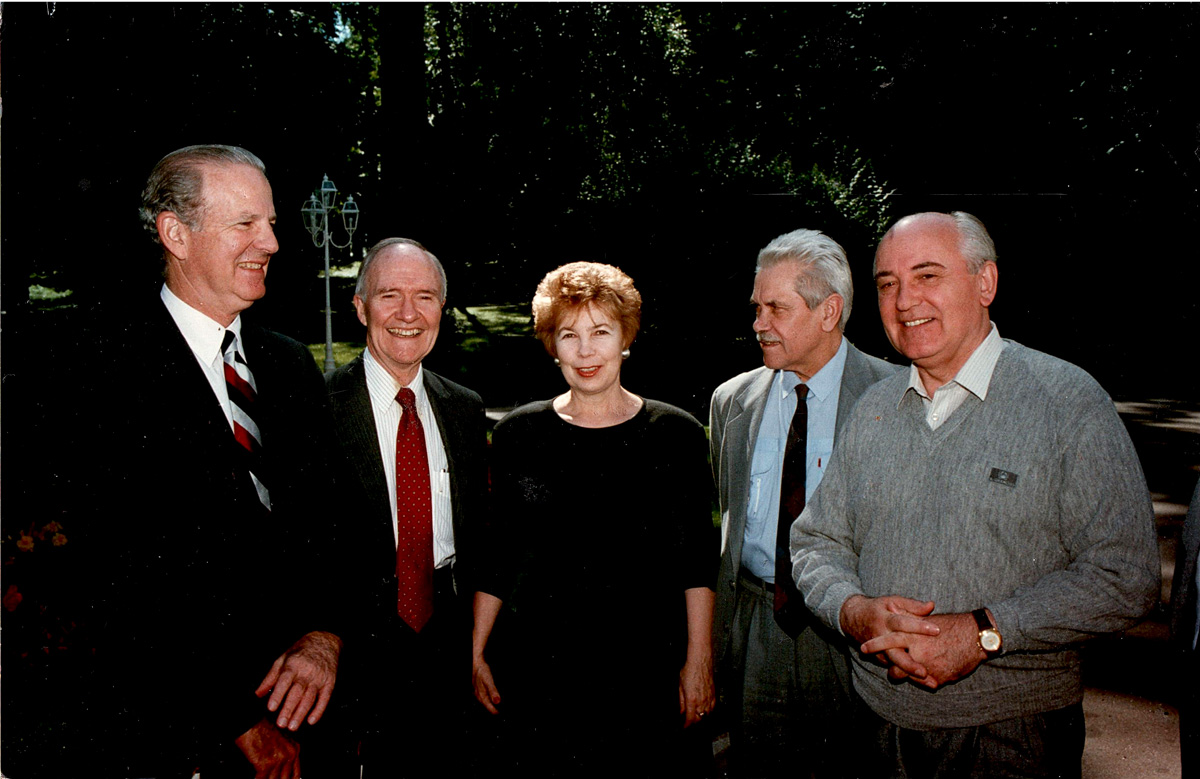 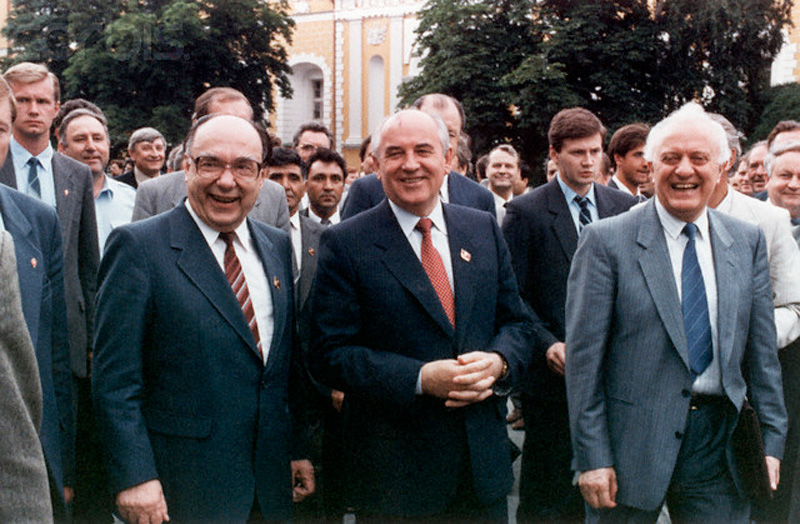