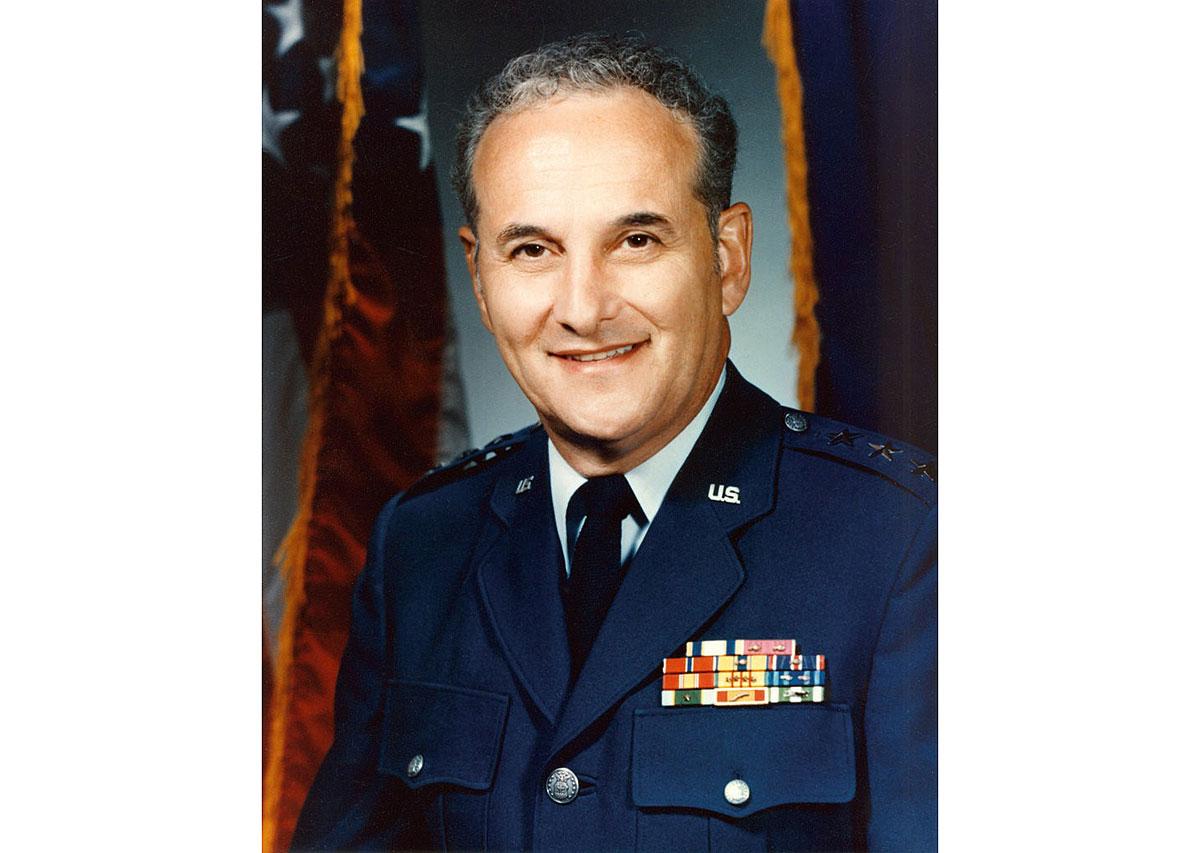 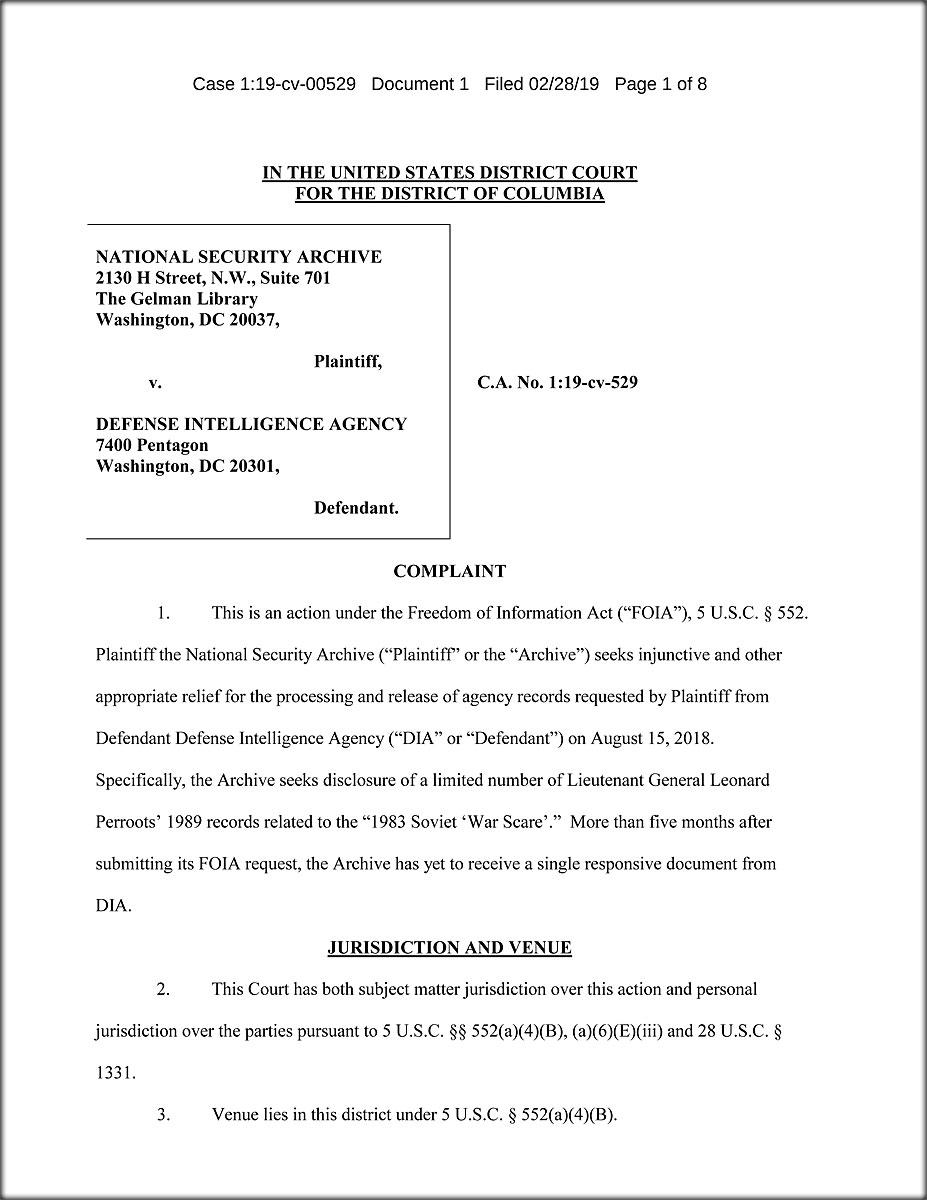 The National Security Archive’s lawsuit against the Defense Intelligence Agency for Perroots’ “parting shot before retirement” which warned of the danger of Able Archer 83. 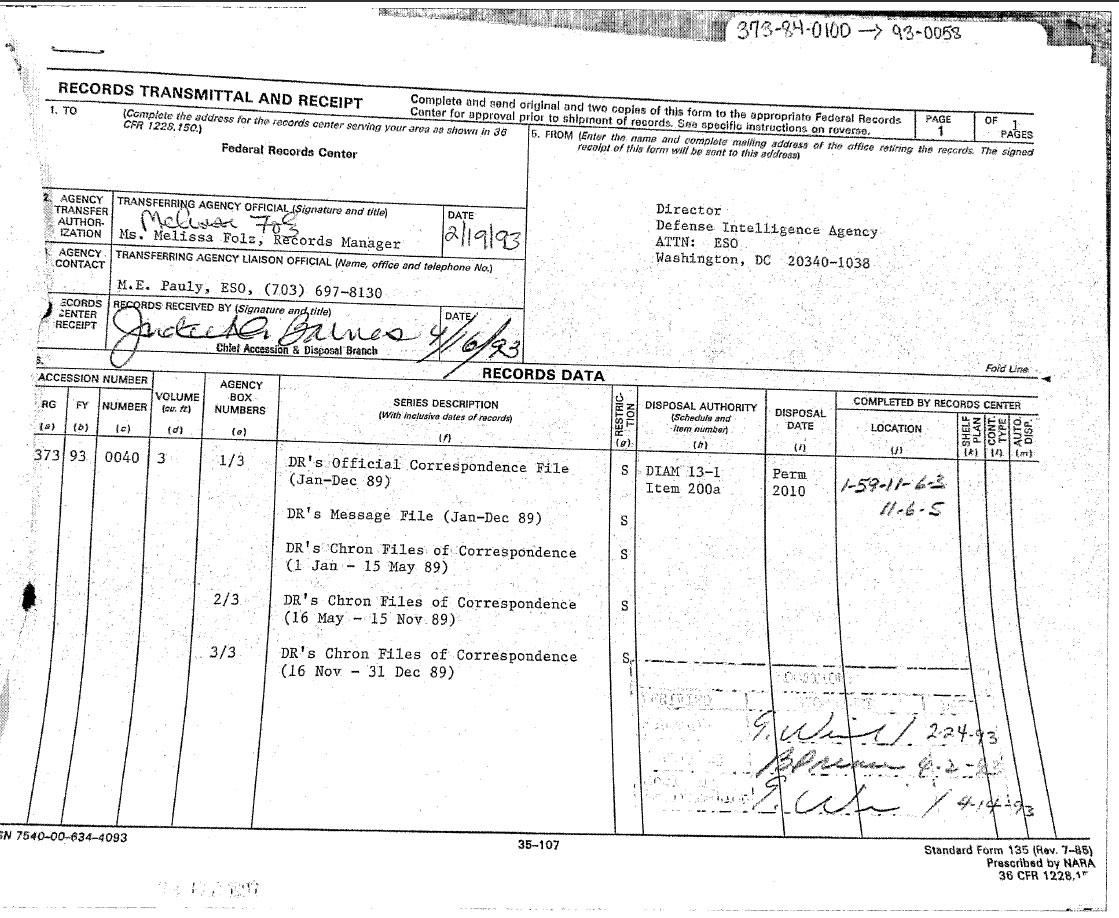 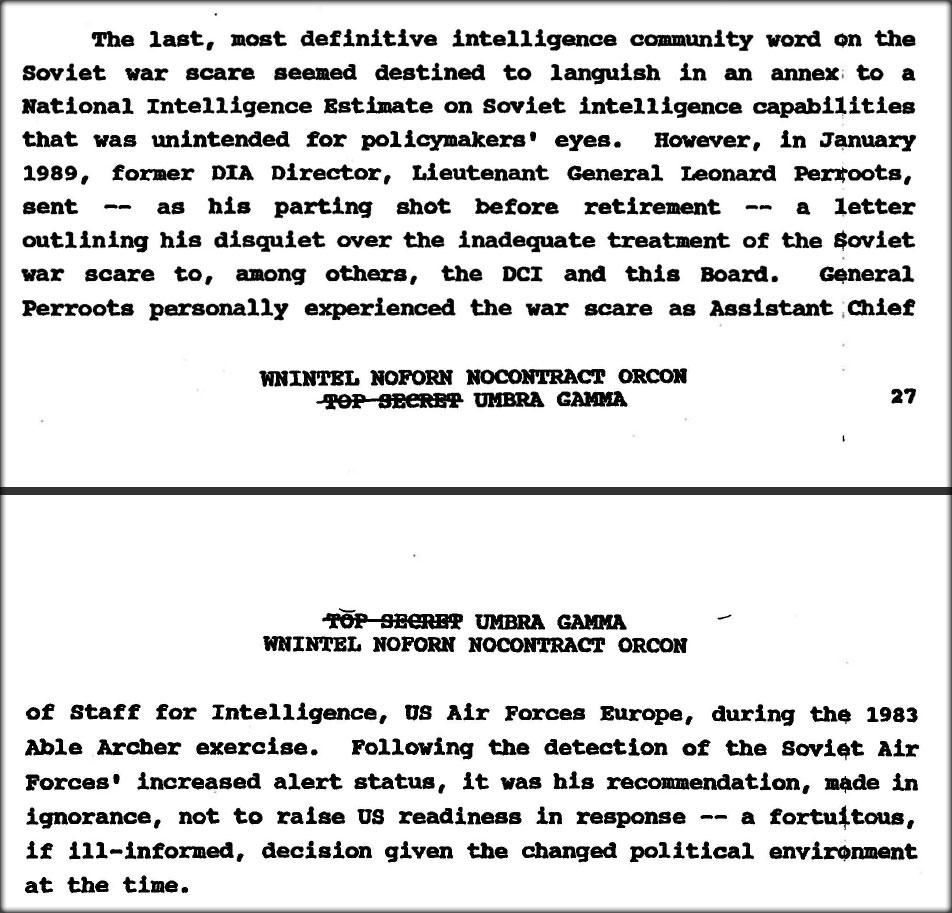 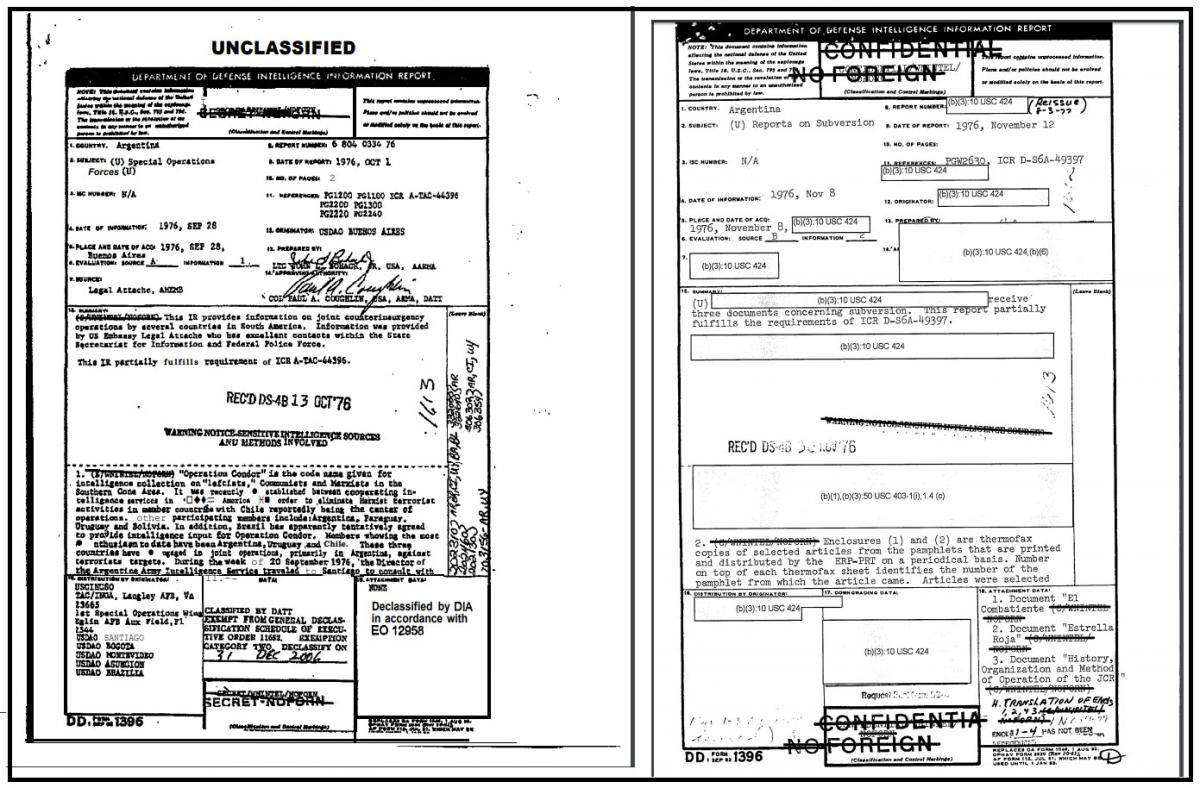 A comparison of the previous DIA declassification and its new overuse of the 10 USC 424 statutory exemption.

Washington, D.C., February 28, 2019 – The National Security Archive today filed a FOIA lawsuit to compel the Defense Intelligence Agency to release documents likely containing a letter from former DIA director Leonard Perroots, warning of the danger caused by the 1983 NATO nuclear exercise Able Archer 83.  The Archive filed suit after receiving no substantive response to the FOIA request six months since filing the request and being told our “unusual” request is 1,133rd within the DIA’s glacial and growing queue.

As the Archive’s pro bono attorneys, John S. Guttmann and Hilary T. Jacobs of Beveridge & Diamond, state in the complaint, “If Plaintiff’s request can be described as ‘unusual’ in any way, it is only ‘unusual’ in how easy it makes it for DIA to efficiently respond to its request by seeking only three pre-located boxes.”

The letter in question was written by Lieutenant General Leonard Perroots, who served as the Assistant Chief of Staff of Intelligence at Ramstein Air Base during Able Archer 83 (see links in left column).  According to a declassified President’s Foreign Intelligence Advisory Board report, Able Archer 83 tested new procedures for releasing nuclear weapons, including “pre-exercise communications that notionally moved forces from normal readiness … to a General Alert.”

In response to the exercise, the Soviet military initiated a “major mobilization” of their forces, including placing Soviet nuclear-capable air forces in Germany and Poland on heightened alert, conducting over 36 intelligence flights, and transporting nuclear weapons from storage sites to launch pads by helicopter.  According to the PFIAB report, the Soviet response was “unparalleled” and had only previously been observed “during actual crises.”

After Perroots observed the signs of elevated Soviet military alert, he chose not to respond in kind, thus averting further escalation during this “War Scare.”  According to the PFIAB report, Perroots and other officers in charge of the Able Archer 83 exercise deescalated the risk “by doing nothing in the face of evidence that parts of the Soviet armed forces were moving to an unusual level of alert.”  The report credits his decision to act “correctly out of instinct, not informed guidance” for ending the nuclear tension.

Perroots rose to serve as Director of the Defense Intelligence Agency from 1985 to 1988.  In 1989, he wrote a letter as a “parting shot before retirement” to US intelligence agencies –in all likelihood including the DIA– requesting further investigation into Able Archer 83 and stating his concerns with the intelligence community’s inadequate treatment of the Soviet Union’s response.  Eventually, the PFIAB took up Perroots’ suggestion, writing a report which concluded, “In 1983 we may have inadvertently placed our relations with the Soviet Union on a hair trigger,” and that “Soviet military leaders may have been seriously concerned that the US would use Able Archer 83 as cover of launching a real attack.”

In 2018 the National Security Archive identified the likely location of the Perroots correspondence as being within three specific boxes of documents held at the Washington Records Center in Suitland, Maryland, sometimes described as the real-life equivalent of the “Indiana Jones Warehouse.”

The Defense Intelligence Agency has long failed to live up to its Freedom of Information Act requirements.  According to the most recent federal reporting, the DIA’s oldest pending FOIA request is over fourteen years old and the average “complex” FOIA request has been pending at DIA for 656 days.  (The DIA deems 97.8 percent of all FOIAs as “complex.”)  When FOIAs are finally processed by DIA, they are usually over-redacted.  These redactions include the relatively recent use of statutory exemption 10 USC 424 markings to censor material which was previously available to the public.

Unless the DIA revamps and improves its FOIA processes, requesters will increasingly turn to the courts to force the agency to comply with the law.

“The 1983 War Scare Declassified and For Real,” edited by Nate Jones, Tom Blanton, and Lauren Harper 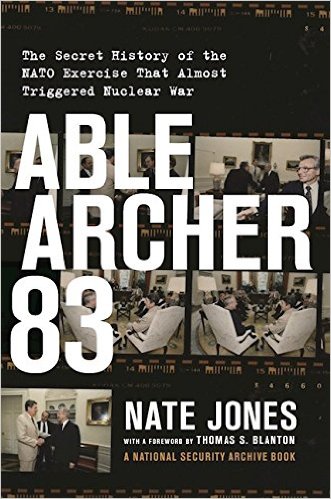