U.S.-Cuba: Secrets of the 'Havana Syndrome' 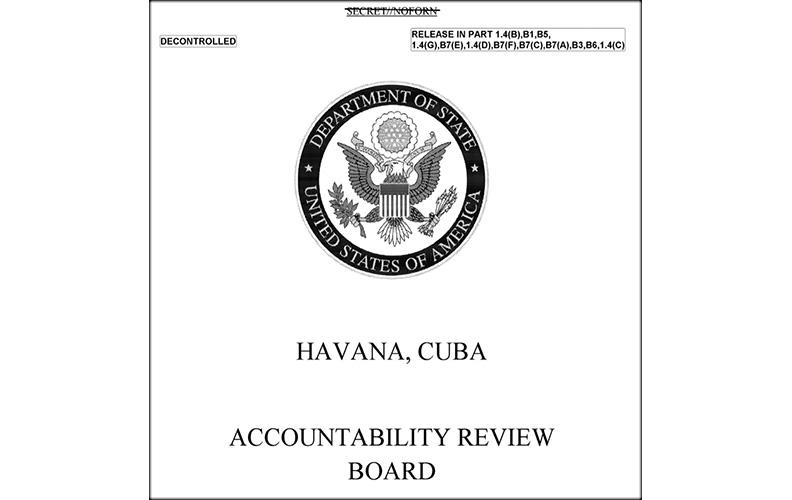 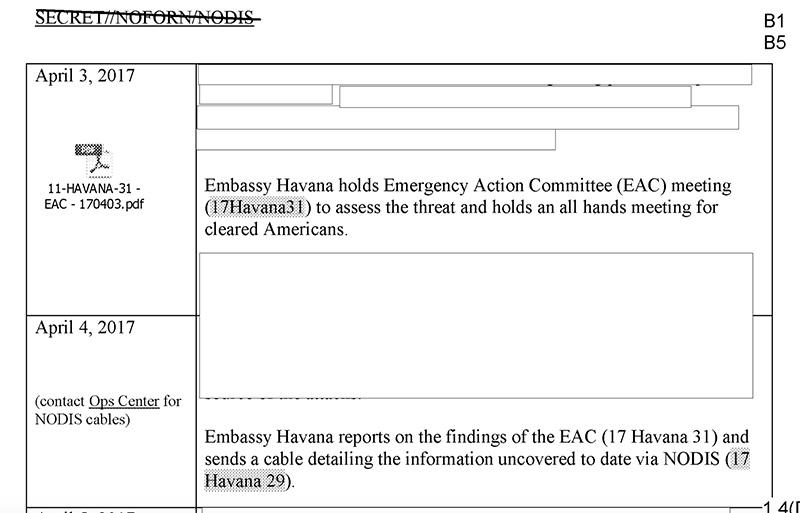 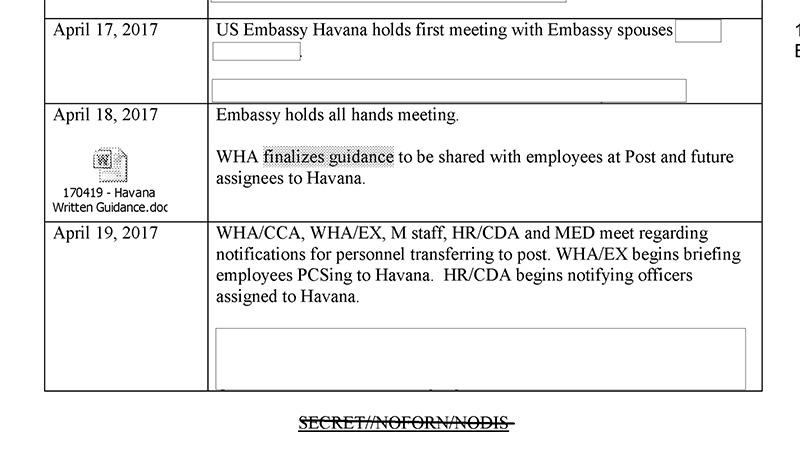 Diplomatic cable from U.S. Embassy Beijing on Emergency Action Committee meeting responding to a report of a health episode by an employee at the U.S. consulate in Guangzhou.

Washington D.C., February 10, 2021 – The Trump administration’s response to the mysterious health episodes experienced by intelligence and diplomatic personnel in Havana, Cuba, in late 2016 and 2017 was plagued by mismanagement, poor leadership, lack of coordination, and a failure to follow established procedures, according to a formerly secret internal State Department review posted today by the National Security Archive.  “The Department of State’s response to these incidents was characterized by a lack of senior leadership, ineffective communications, and systemic disorganization,” states the executive summary of the report, compiled by an internal Accountability Review Board (ARB) after a four-month investigation in 2018. “No senior official was ever designated as having overall responsibility,” the report noted in a thinly veiled indictment of then-Secretary of State Rex Tillerson’s role, “which resulted in many of the other issues this report presents.” The report also faulted the Secretary of State’s failure to follow normal procedures in making his September 29, 2017, decision to drastically reduce the Embassy staff and shutter the Consulate.

The report, stamped SECRET/NOFORN, was provided to Tillerson’s successor, Mike Pompeo, on June 7, 2018. A full eighteen months after the unexplained afflictions were first reported, the ARB conceded that what happened in Havana remained shrouded in mystery. “The mechanism for the cause of the injuries is currently unknown. We do not know the motive behind these incidents, when they actually commenced, or who did it,” the report states. “We do know that USG, and Canadian diplomatic community members, were injured, but we do not know how. We do not know what happened, when it happened, who did it, or why.”

The National Security Archive obtained the heavily redacted ARB report, titled “Havana, Cuba,” via a Freedom of Information Act request. The State Department has been processing and periodically releasing records related to the so-called “Havana Syndrome” pursuant to a FOIA lawsuit filed by the James Madison Project, a public-interest firm representing a group of Embassy officials and family members who were posted in Havana.

“The ARB report sheds considerable light on the ‘Havana Syndrome’ history,” said Peter Kornbluh, who directs the Archive’s Cuba Documentation Project. “But it does not solve the enduring mystery of what happened in Cuba.” The clues to resolving that mystery, he noted, are likely to be found in still-secret State Department, CIA, FBI, and Pentagon records, which remain immediately relevant as the Biden administration considers restoring Embassy staffing to full operations.

The report contains a number of key revelations and highlights, among them:

** Closing the CIA’s Havana Station: The ARB report provides the first official confirmation that the CIA closed down its Havana station and pulled its operatives out of Cuba in September 2017. A September 13, 2017, entry in a chronology of U.S. government actions states: “CIA informs [Acting Assistant Secretary Francisco] Palmieri of its decision to withdraw personnel from Havana for the foreseeable future.” The decision appeared to be precipitated by two more U.S. intelligence officers falling ill on August 22, 2017, while staying at the Hotel Nacional in Havana, reinforcing suspicions at the CIA that their agents were being targeted. “In August 2017,” the ARB reported in an oblique reference to those agents, “two TDY [temporary duty travel] personnel experienced medical injury from an incident at a Havana hotel.”

** ‘Excessive Secrecy’ as an Impediment: The ARB criticized the CIA for failing to share information about the health-related experiences of its agents in Havana in late 2016 and early 2017, delaying the State Department’s ability to rapidly react. “Both at [Havana] Post and in Washington, response to the incidents was characterized by excessive secrecy that contributed to a delayed response,” the report noted in its findings on communication and information sharing. The Board forcefully recommended that “The Secretary of State should advise employees, and his counterparts at other agencies represented at missions overseas, that he expects complete transparency and prompt notification regarding any episode that results in harm or increased danger for USG employees.”

** “Systemic Disorganization”: The ARB faulted the failure of an organized response to the emerging crisis on multiple fronts. The Board “found serious deficiencies in the Department’s response in areas of accountability, interagency coordination, and communication, at all levels, both at [the Havana] Post and in Washington,” the report stated. “These deficiencies contributed to the confusion surrounding the events, and delayed effective, coordinated action.”  The report singled out Secretary Tillerson’s delay in appointing high-level officials to the Under-Secretary positions as a major obstacle to an organized response to the situation in Cuba. “The Board finds the lack of a designated official at the Under-Secretary level to manage the response to be the single most significant deficiency in the Department’s response.”

“To this day,” the report admonished in June 2018, “no senior official at the Department has been assigned responsibility for leading and coordinating efforts to assess past incidents and prevent /mitigate future events.” And “no Department of State task force was formed” to address the many security, personnel and medical issues created by the ‘Havana Syndrome” episodes. “While various bureaus and individuals took action to address their specific part of the problem, everyone the Board interviewed agreed there was no official in charge,” asserted the report. “As a result, a whole-of-government comprehensive effort to identify the mechanism of injury and perpetrators, to understand the universe of potentially affected individuals, to treat and rehabilitate the injured employees as well as to deal with the many administrative issues associated with this anomalous event never emerged.”

The report offered special praise for the State Department’s Bureau of Medical Services which “performed strongly” and “gets high marks for dealing with an unprecedented situation in a competent and professional manner.” But it criticized the State Department’s failure to establish adequate communications with those employees affected by the ‘Havana Syndrome.’ “Overall, the Department of State failed to maintain effective communication with employees evacuated from Havana (both medical evacuees and those evacuated for the ordered departure), again, in part, because no one was assigned this responsibility.”

** Embassy Staff Reduction:  Secretary Tillerson’s dramatic decision in late September 2017 to reduce the Havana Embassy staff by more than 60 percent and effectively shutter the U.S. Consulate appeared to have violated normal operating practice, the Accountability Board concluded. “The decision to draw down the staff in Havana does not appear to have followed standard Department of State procedures and was neither preceded nor followed by any formal analysis of the risks and benefits of continued physical presence of U.S. government employees in Havana,” according to the report.  The Board tried, and failed, to obtain an explanation for why the basic risk/benefit analysis was not conducted. In a heavily censored section titled “Risk Benefit Analysis or Lack Thereof,” the report states: “The State Department has had such a process for a number of years, however, no such analysis has been done to date (June 7, 2018) for Cuba. Of the many Department leaders interviewed by the Board, no one could explain why this has not happened, except to suggest that [redacted]”—a possible reference to the influence of the CIA’s withdrawal on Tillerson’s decision to reduce the embassy to a skeletal staff, or to political pressure from Florida Senator Marco Rubio on President Trump to seize the opportunity to roll back the Obama administration’s opening of full diplomatic relations with Cuba.

** The China Syndrome?:  The Board received information on similar health incidents in at least three other countries. “In addition to Embassy Havana, there were reports of similar incidents at several other posts (Tashkent, [redacted country name], and China).”  In the case of China, the report included a cable (not released with the declassified version) from the U.S. Embassy in Beijing, dated May 21, 2018, stating that the Embassy had convened an Emergency Action Committee to address a “victim of auditory or sensory phenomena.” According to the Board, there was “one medically confirmed report regarding a Consulate Guangzhou employee, who described incidents in Guangzhou, China, similar to those experienced by Embassy Havana community members and whose injuries were confirmed by medical experts to match those of the Havana victims.”

** Impeding the CDC Investigation: The State Department commissioned the Centers for Disease Control and Prevention (CDC) to conduct an investigation at the end of 2017, but then for almost a year blocked sharing of medical data needed for the study to move forward. The ARB report indicated that State Department lawyers had cited legal privacy restrictions on patient information as the reason for the impasse. The Accountability Review Board pressed for a resolution, recommending that “The Department of State Legal Adviser should immediately engage with the senior legal official at CDC to resolve disagreement that is impeding the sharing of medical records with the CDC to enable CDC to begin the medical study immediately.”

THE ACCOUNTABILITY REVIEW BOARD

The Accountability Review Board procedures were mandated by Congress in 1986 to assist the State Department in addressing security challenges at U.S. Embassies abroad. Under the law, a security-related incident involving an Embassy or its personnel triggers convening the Board, usually within 60 days of the incident, with a mandate to investigate what happened and recommend steps to safeguard against future incidents.

In the case of Cuba, the Trump administration delayed convening the ARB until early 2018—doing so only after Senator Rubio warned that its inaction might violate the ARB statute. Chaired by Ambassador Peter Bodde, the five-member Board initiated its investigation in February 2018, interviewing 116 officials, traveling to Cuba, and reviewing documents over a four-month period. The ARB submitted its classified report to the Secretary of State in June 2018. 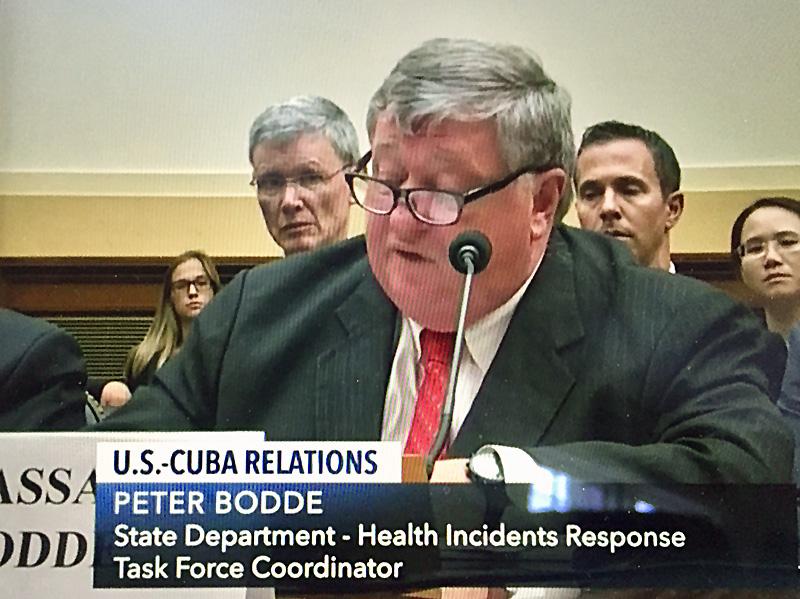 Pursuant to the law, Secretary Pompeo had 90  days to report to Congress on the ARB findings. Some classified briefings were provided to Senators such as Rubio and New Jersey Democrat Robert Menendez but the classified report was withheld from distribution. “At this time, there are no plans to release the report publicly,” stated a press guidance prepared at the time.  Instead, the State Department issued a “fact sheet” that reviewed the ARB recommendations which had been accepted and were being implemented. (For example, Pompeo established a Health Incidents Response Task Force; he also appointed a State Department liaison for the affected personnel.  After an 11-month delay, in November 2018 the State Department did belatedly provide the CDC with the medical data it needed to pursue its investigation.)  “Some recommendations will not be able to be fully closed until such time as the cause behind the incidents has been determined,” according to the fact sheet.

The National Security Archive plans to use the FOIA to pursue other records identified in the ARB report, as well as appeal the extensive redactions, many of which are hiding information relating to the experience of the CIA agents in Havana, even though details of their ordeal have been reported in media outlets such as The New Yorker, Propublica, and the Associated Press. “It is ironic that the declassification reviewers continue to engage in the type of ‘excessive secrecy’ that the authors of the ARB report identified as impeding an effective response to this troubling mystery,” Kornbluh noted. “As the Biden administration assumes responsibility for the continuing investigations into the ‘Havana Syndrome,’” he said, “complete transparency is needed to clarify what actually happened.”

The Mystery of the Havana Syndrome
by Adam Entous and Jon Lee Anderson
The New Yorker
November 19, 2018

The Sound and the Fury: Inside the Mystery of the Havana Embassy
by Tim Golden and Sebastian Rotella
Propublica
February 14, 2018