The award-winning documentary film chronicles the evolution of U.S. policy on detention and interrogation post-9/11. Torturing Democracy won the Robert F. Kennedy Journalism Award and was called the "definitive broadcast account of a deeply troubling chapter in recent American history."

Washington D.C., August 10, 2018 – Current CIA director Gina Haspel described graphic acts of deliberate physical torture including the waterboarding of a suspected Al-Qa’ida terrorist under her supervision when she was chief of base at a CIA black site in Thailand in 2002, according to declassified CIA cables – most of which she wrote or authorized – obtained by the National Security Archive through a Freedom of Information Act lawsuit and posted on the Web today.

The Haspel cables detail conditions the public has only seen in the infamous Abu Ghraib photographs from Iraq of detainees hooded and shackled, forced nudity, wall slamming, and box confinement, as well as “enhanced techniques” never photographed such as the simulated drowning of suspects on the waterboard. Waterboarding is a war crime under both U.S. and international law, dating back to U.S. prosecution of Japanese solders for torturing U.S. POWs during World War II.[1]

Although the CIA redacted Haspel’s name and those of the CIA contract psychologists James Mitchell and Bruce Jessen who administered the waterboard, other declassified documents (including the 2004 CIA Inspector General report) and public statements confirm their leadership of the torture of alleged terrorist Abd al Rahim al-Nashiri at the black site between November 15 and December 4, 2002.

“Release of Gina Haspel’s torture cables shows the power of the Freedom of Information Act to bring accountability even to the highest levels of the CIA,” said Archive director Tom Blanton, who first identified the Haspel cables from a footnote (336 on p. 67) in the Senate Intelligence Committee torture report declassified in 2014.

The Archive filed its FOIA request for the Haspel cables on April 16, 2018, after she was nominated by President Trump to be CIA director. Despite the clear public interest in the documents, the CIA denied the Archive’s request for expedited processing, and the Archive went to court on April 27. The U.S. Senate confirmed Haspel as CIA director on May 17 (by a vote of 54-45) on the basis of a record amassed almost exclusively in closed hearings, with no declassification or public release of information even remotely approaching that of previous CIA nominees.

David Sobel, FOIA expert and former Archive counsel, drafted and filed the initial Archive complaint in federal court; and the Archive’s pro bono counsel Peter Karanjia and Lisa Zycherman of the law firm Davis Wright Tremaine took on the task of negotiating with the U.S. Attorney’s office over release of the documents.

In addition to the work of Sobel, Karanjia and Zycherman, Blanton credited two other lawsuits with paving the way for release of the Haspel cables. The civil lawsuit Salim v. Mitchell brought by the ACLU against the CIA contract psychologists who were the architects of the torture program forced the CIA to search and review as many as 24,000 documents from the massive database used by the Senate Intelligence Committee staff in the writing of their report. The FOIA lawsuit by freelance journalist Daniel DeFraia[2] then compelled release of key documents, including five Haspel cables included in this posting, even after the August 2017 settlement in the Salim v. Mitchell case.

The released Haspel cables feature extensive redactions by the CIA, including their dates (although those can be ascertained from the declassified CIA Inspector General’s report, among other sources) and most of the information results from the torture (although those have been summarized by the Senate Intelligence Committee report and two of the Haspel cables even admit failure to produce actionable intelligence).

The biggest mystery in the released cables is whether Gina Haspel wrote Cable 11359, from December 1, 2002, which uses remarkably vivid language to describe the torture sessions: The interrogators “strode, catlike, into the well-lit confines of the cell at 0902 hrs [redacted], deftly removed the subject’s black hood with a swipe, paused, and in a deep, measured voice said that subject – having ‘calmed down’ after his (staged) run-in with his hulking, heavily muscled guards the previous day – should reveal what subject had done to vex his guards to the point of rage.” 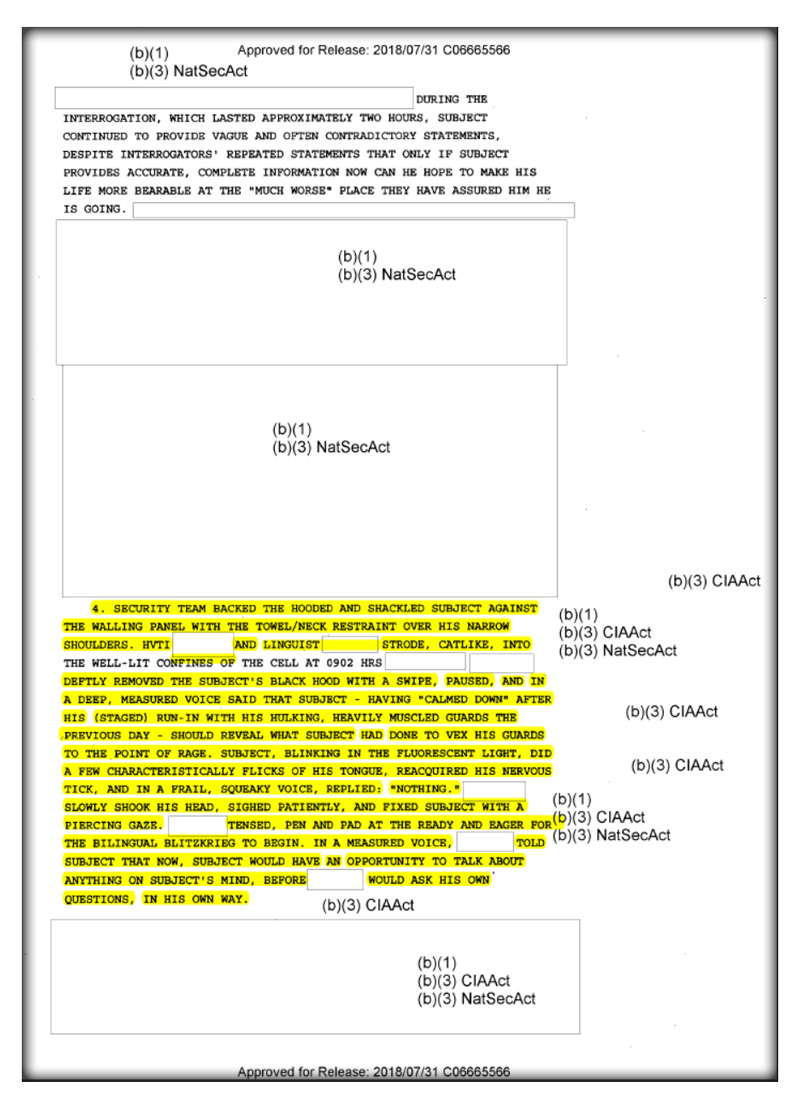 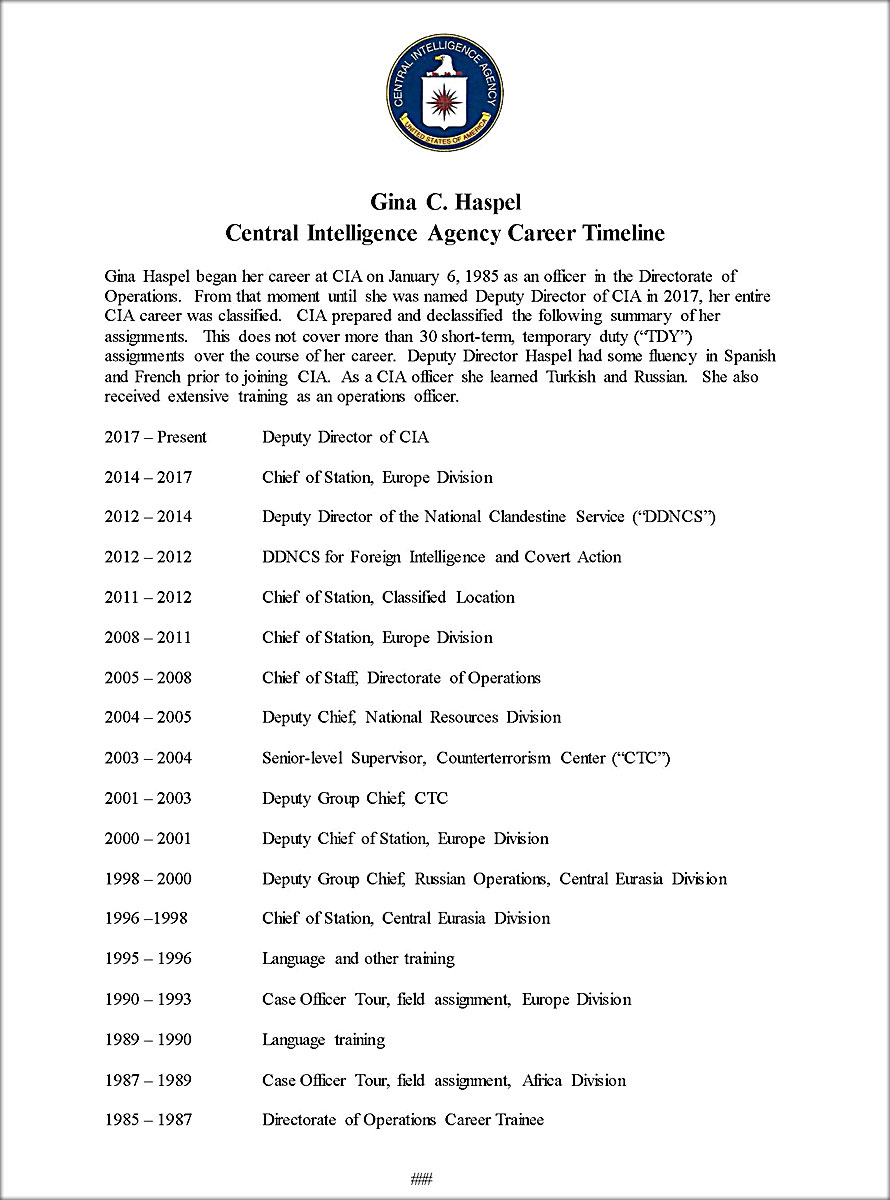 The CIA's careful summary of Gina Haspel's career, leaving out all her short-term posts including her command of the Thailand black site in late 2002 where Nashiri was tortured. 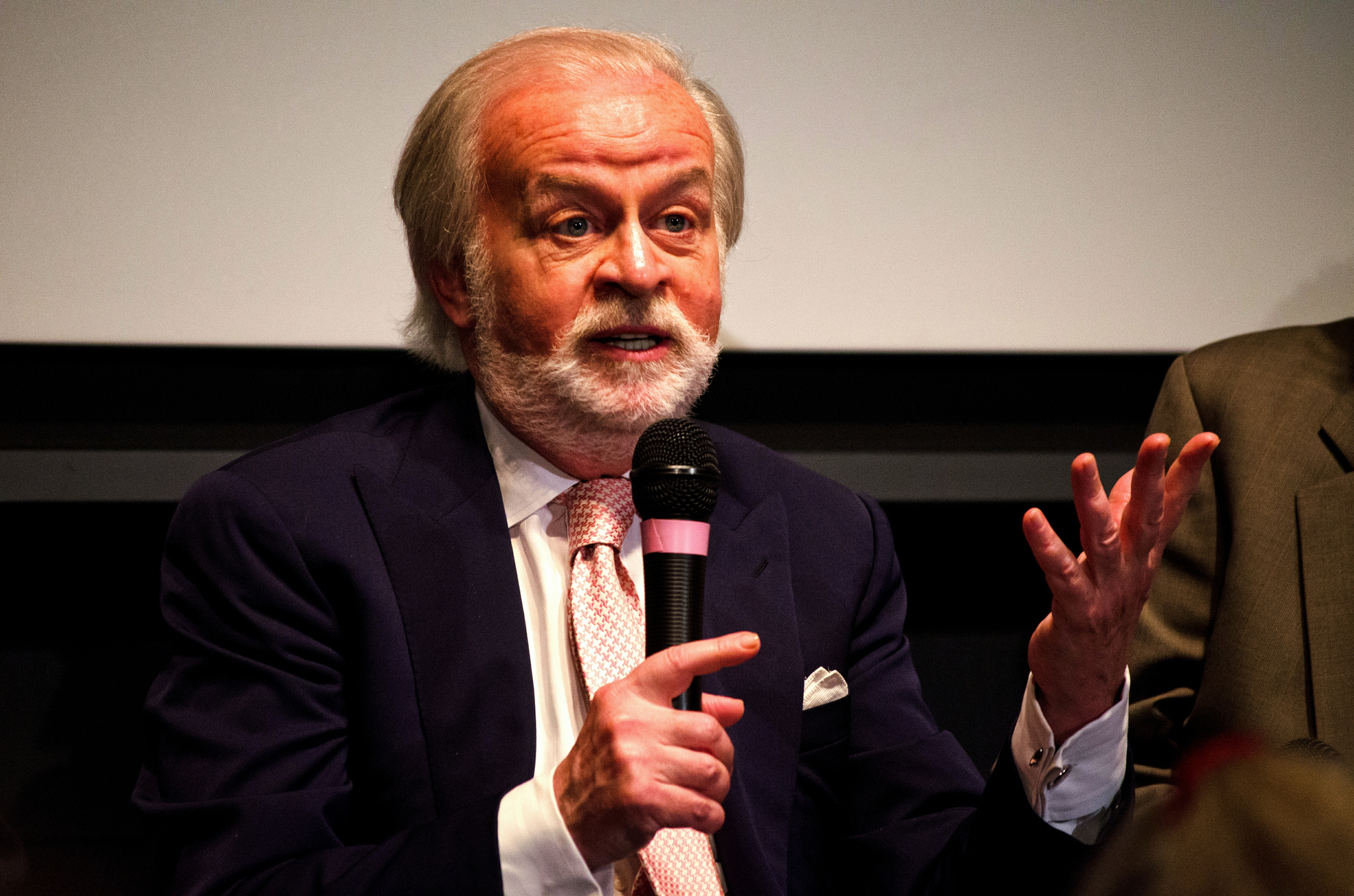 Top CIA lawyer John Rizzo worked the Justice Department to get legal approval for the proposed torture methods in a series of secret opinions that were ultimately repudiated by Justice but only years later. 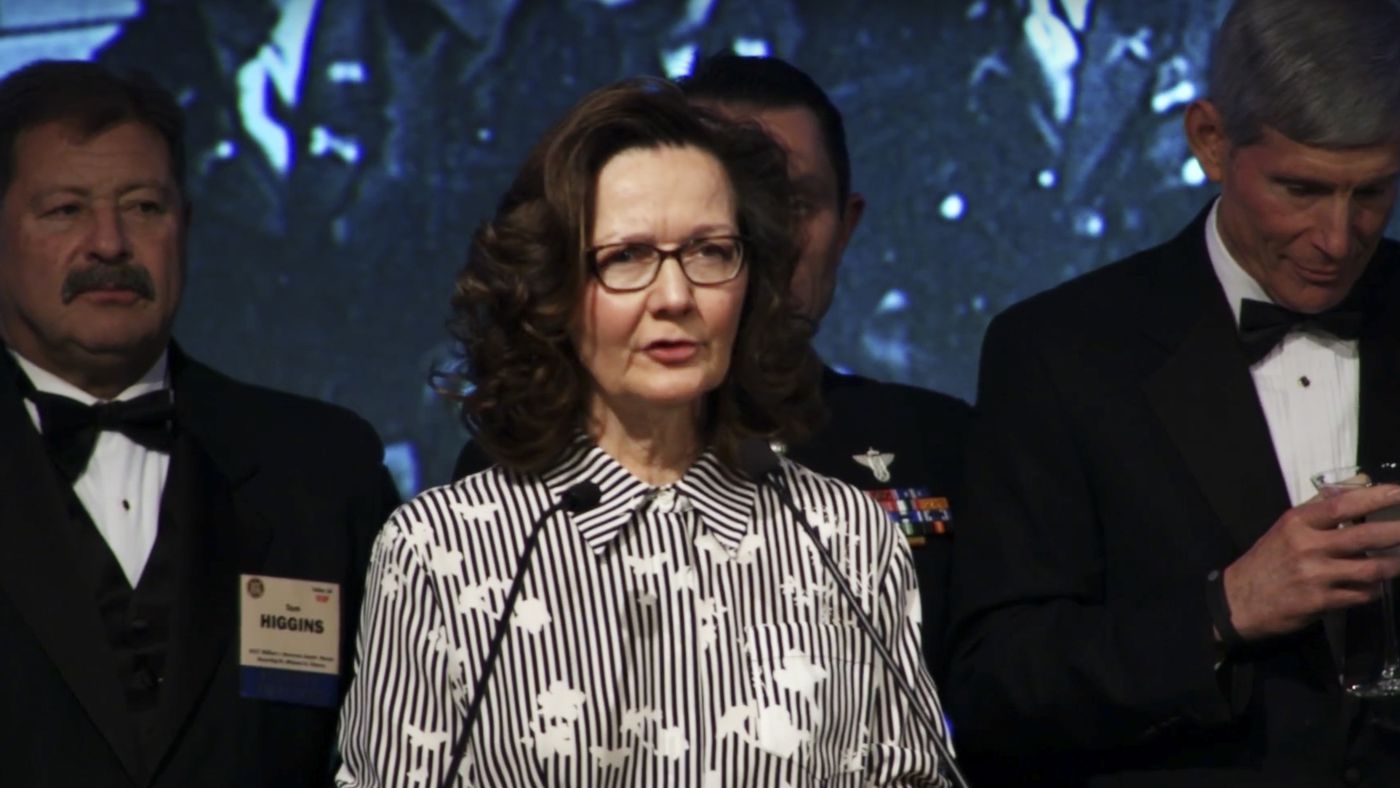 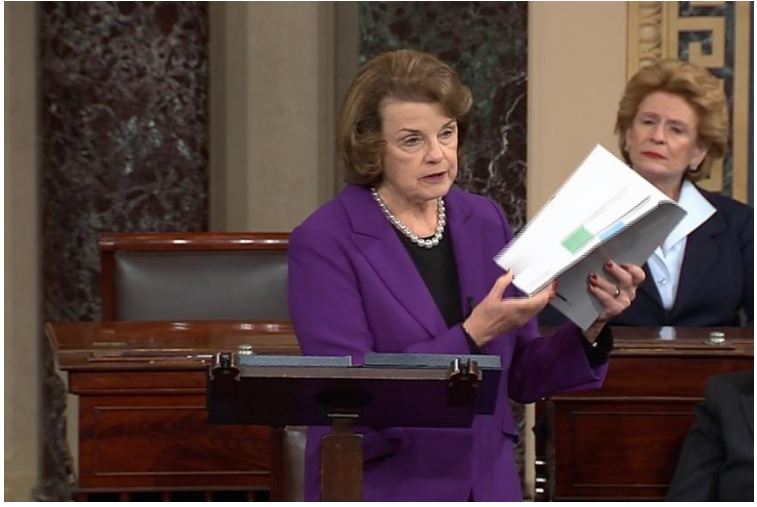 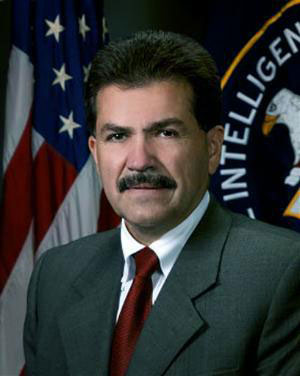 Jose Rodriguez, Haspel’s boss as head of the CIA Counterterrorism Center in 2002 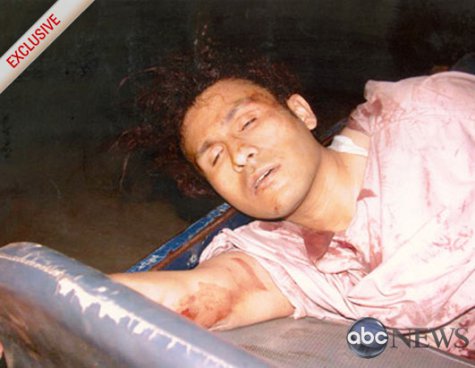 Abu Zubaydah after his capture in Pakistan, 2002. CIA officers complained about "legality" of his torture only to be rebuked by Jose Rodriguez. (ABC News from Prison Photography site) 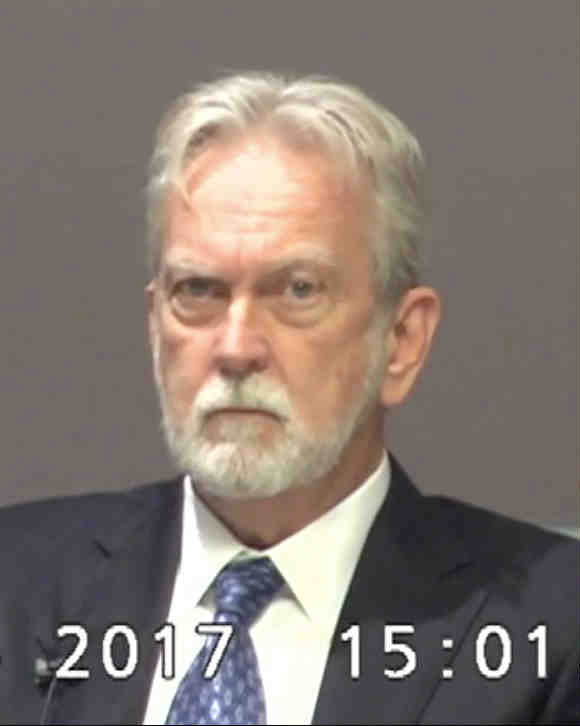 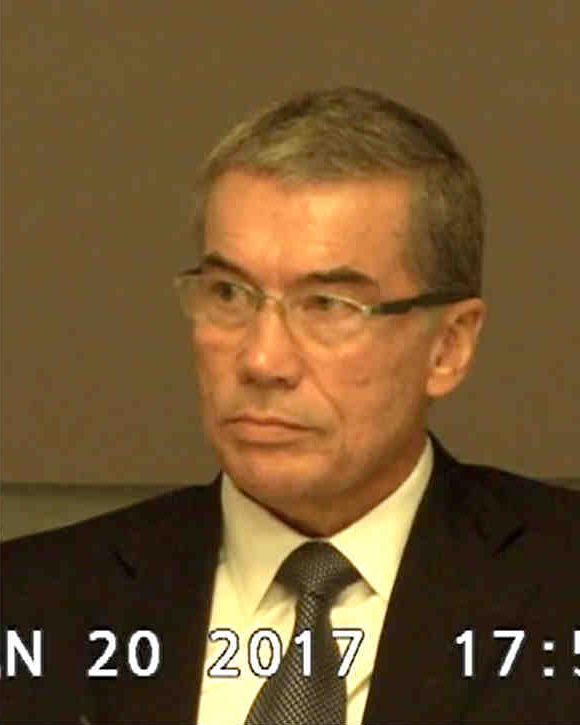 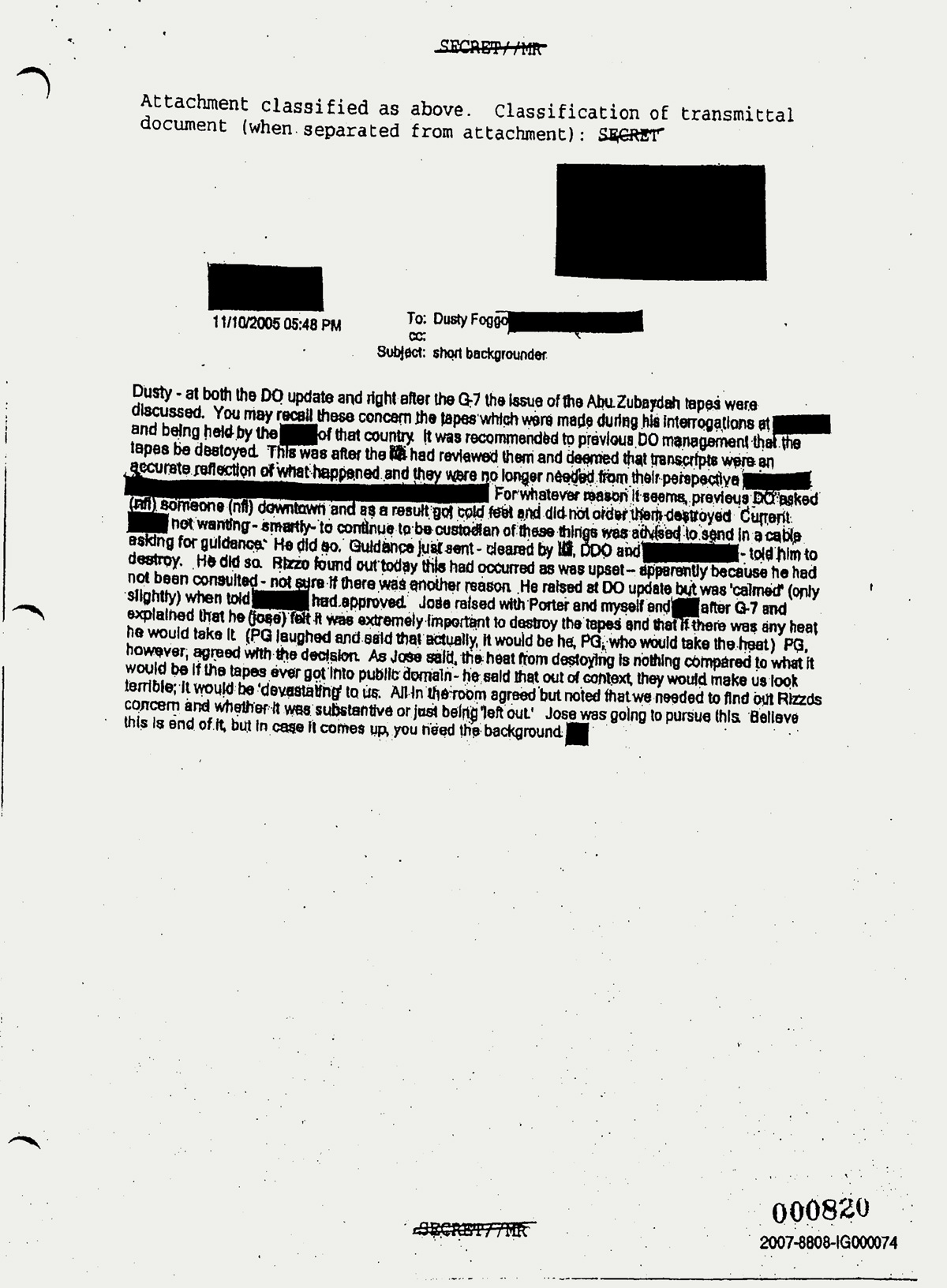 "The heat from destoying [sic] is nothing compared to what it would be if the tapes ever got into the public domain."

[2]DeFraia co-authored with Tim Golden and Stephen Engelberg of ProPublica the most comprehensive account of Haspel's career, published on May 7, 2018 at ProPublica, quoting at length from the Nashiri-related cables obtained by DeFraia's lawsuit.  The cables obtained by the Archive lawsuit confirm the ProPublica account and add significant new details including the three specific waterboarding sessions.