Foreign Service Officer Protests of: US Inaction over My Lai atrocities “similar to those of Nazis;” “Selective Genocide” in Bangladesh and Burundi; Cooking the Books on Vietnam Intelligence; and US Policy towards the USSR, China, and the World.

Cables Report “Blatantly Illegal” Congressional Gemstone Smuggling and the use of embassies for the “soliciting of female companionship.”

The Tilt: The U.S. and the South Asian Crisis of 1971
by Sajit Gandhi
National Security Archive
December 16, 2002

State Department dissent memo: ‘We are better than this ban’
by Josh Rogin
Washington Post
January 30, 2017

Washington D.C., March 15, 2018 - A US Foreign Service officer warned that “blatantly illegal” Congressional requests, including the use of a diplomatic pouch to smuggle gemstones and utilizing embassy employees for the “soliciting of female companionship,” were harming “the personal integrity of employees of the Department of State,” according to a Dissent Channel cable newly released to the National Security Archive after a Freedom of Information Act lawsuit.

This 1974 cable from the US Embassy in Tegucigalpa, Honduras, one of the earliest sent via the Dissent Channel, is one of dozens of messages, together with responses by the State Department’s Policy Planning Staff, posted today by the National Security Archive. Cables sent via the Dissent Channel are formal critiques of US policy by employees of the State Department. State responded to the Tegucigalpla dissent by stating that “current guidance...regarding Congressional travel is adequate.”

The topics covered in these formal cables vary widely, from moral concerns over embassies soliciting female companionship for US Congressmen, to calls for the US to act to stop “genocide,” to warnings of errors in intelligence reporting from the Vietnam War, to recommended changes in grand strategy towards the Soviet Union and China. Among the dissents and responses posted today by the Archive are:

These Dissent Channel cables were previously withheld from an Archive FOIA request under the FOIA's "predecisional" Exemption 5, but the 2016 FOIA Improvement Act amendments made it illegal for agencies to use this exemption after 25 years. The first impact of this change was the CIA’s release of the fifth volume of its Bay of Pigs history, which it previously hid from the public as a “draft.”

Following passage of the FOIA Improvement Act, the National Security Archive re-requested these key Dissent records. After the State Department failed to respond to the National Security Archive’s FOIA request, we sued with pro bono representation from Alex Haskell, Cliff Sloan, and Gregory Craig of Skadden, Arps, Slate, Meagher & Flom. The agency then agreed to release these historically important records drafted by its dissenters on a rolling basis. The Archive will post them as they are released.

The Dissent Channel was created as a result of the US war in Vietnam. By 1968, each unmarried junior Foreign Service officer who had not performed active duty military service was required to go to Vietnam for his first Foreign Service tour. High FSO casualty rates, and the fact that, according to a Foreign Service Journal article by David T. Jones, “a critical mass of officers had genuinely come to believe that the US policy in Vietnam was wrong, ineffective or both” led to the gradual creation of State Department mechanisms for its employees to voice dissent.

The initial iteration under Secretary of State Dean Rusk was the Open Forum Panel, which served as a “general conduit” for the previously underrepresented views of junior officers on issues including foreign policy. But the Forum was a “steam valve, not a steam turbine” and in April 1970, 50 FSOs sent a letter to Secretary of State William Rodgers protesting the pending US invasion of Cambodia.

At the same time, the American Foreign Service Association began awarding annual awards for dissent to US policy Foreign Service officers. The pressure led to the publication of a State Department report entitled “Diplomacy for the ‘70s, which included over 500 recommendations for improvement. One of these was to establish “a general principle… that officers who cannot concur in a report or recommendation submitted by the mission are free to submit a dissenting statement.” These developments culminated in February 1971 when the Foreign Affairs Manual was updated to include the explicit freedom of FSOs to dissent.[1]

Today, the Foreign Affairs Manual states that the Dissent Channel was created “to allow its users the opportunity to bring dissenting or alternative views on substantive foreign policy issues… to the attention of the Secretary of State and other senior State Department officials in a manner which protects the author from any penalty, reprisal, or recrimination.”[2] In the words of Ambassador and dissenter Thomas Boyatt, “In the US federal government (and probably the world) [the institutionalization of dissent] exists in only one place – the US Department of State. For more than 40 years, whistleblowers and those prepared to tell truth to power have been protected and respected there.”[3] Now, we can read the cases that diplomats made against their government’s foreign policy.

In the words of one now-declassified cable, “The Dissent Channel can be a mechanism for unclogging the Department’s constipated paper flow” related to pressing employee dissent against current foreign policy actions. The Director of Policy Planning for State is responsible for “providing a substitutive reply, normally within 30-60 working days.”The responses to the critiques posted today are drafted by high level diplomats including Anthony Lake, Warren Christopher, and Paul Wolfowitz.

The Dissent Channel remains in active use today. In January 2017, nearly 1,000 State Department Foreign Service officers and civil service members signed a document transmitted through the Dissent Channel in opposition to an executive order signed by President Trump halting the issuance of visas to people from seven Muslim countries. The dissent, which has been published, states, that the executive order “runs counter to core American values of nondiscrimination, fair play, and extending a warm welcome to foreign visitor and immigrants.” Moreover, “[t]he end result of this ban will not be a drop in terror attacks in the United States; rather, it will be a drop in international good will towards Americans and a threat towards our economy.” The text or existence of any Policy Planning response to this Dissent has not been made public.

Included among the Dissent Channel cables and Policy Planning responses posted today by the National Security Archive are formal dissents over:

Peruse these and other Dissent Channel cables, and flag new insights on Twitter with the hashtag #dissentchannel. As the Department of State continues releasing documents in response to our FOIA lawsuit, the National Security Archive will post the full corpus of Dissent Channel cables on a special section of our website. 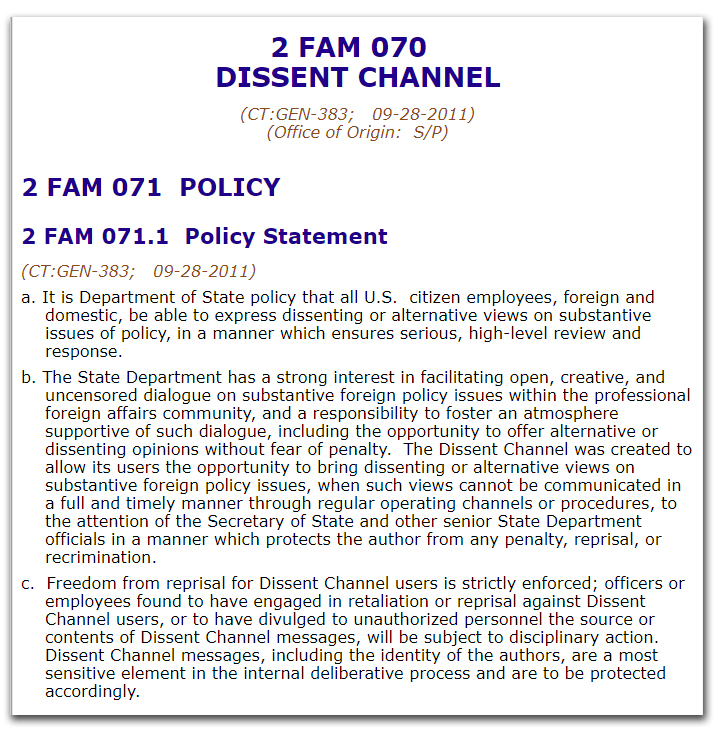 The Foreign Affairs Manual 2 FAM 070 which governs the use of the Dissent Channel. 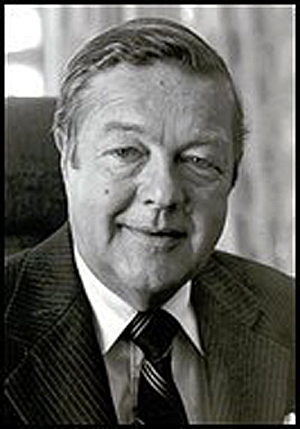 Archer Blood, author of the first known Dissent Cable on "genocide" in East Pakistan.  From the Association for Diplomatic Studies and Training. 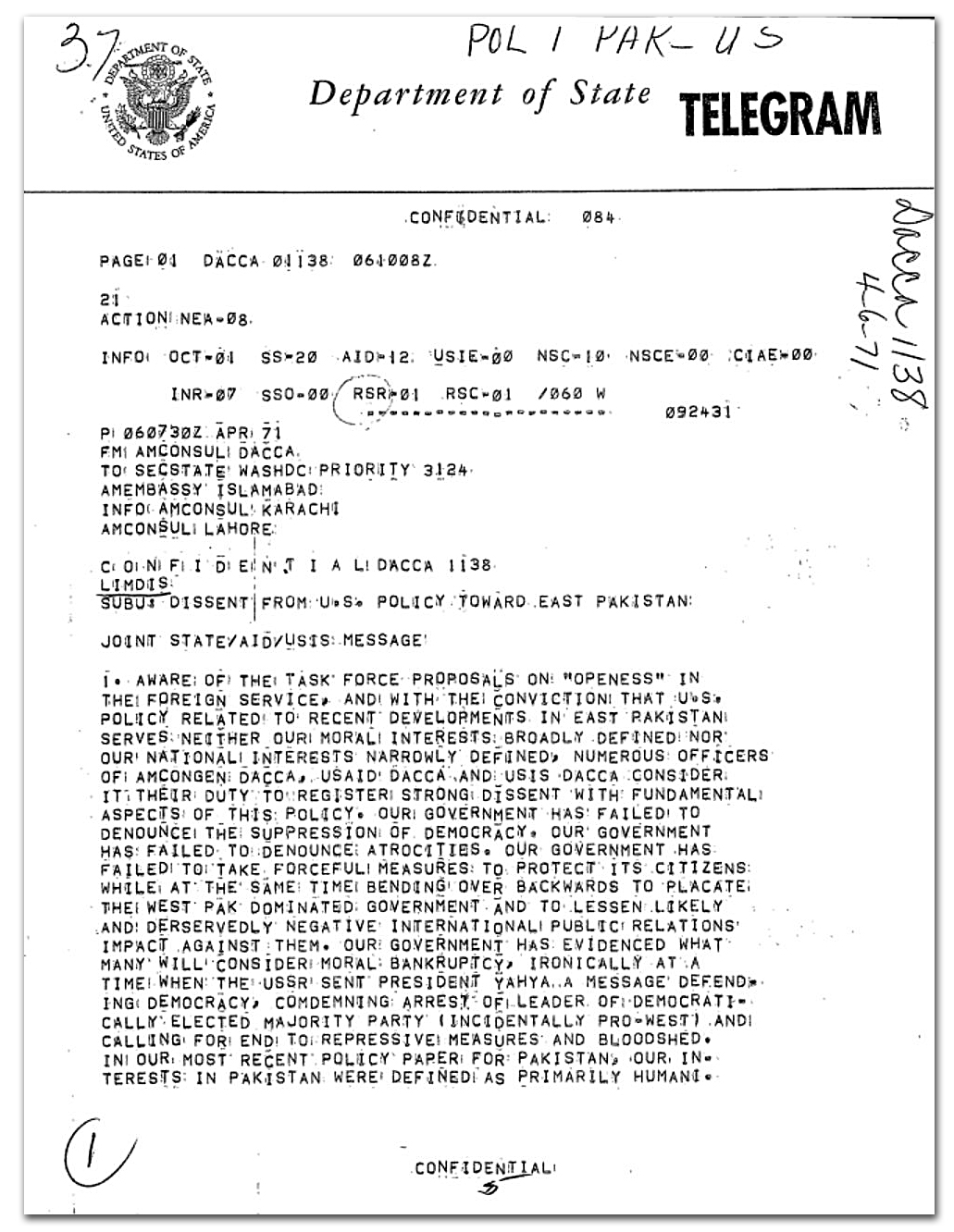 The first known Dissent Cable describing "genocide" in East Pakistan (Bangladesh).  Unlike most of the documents released by the State Department in our lawsuit, the names and signatures on this cable are unredacted. 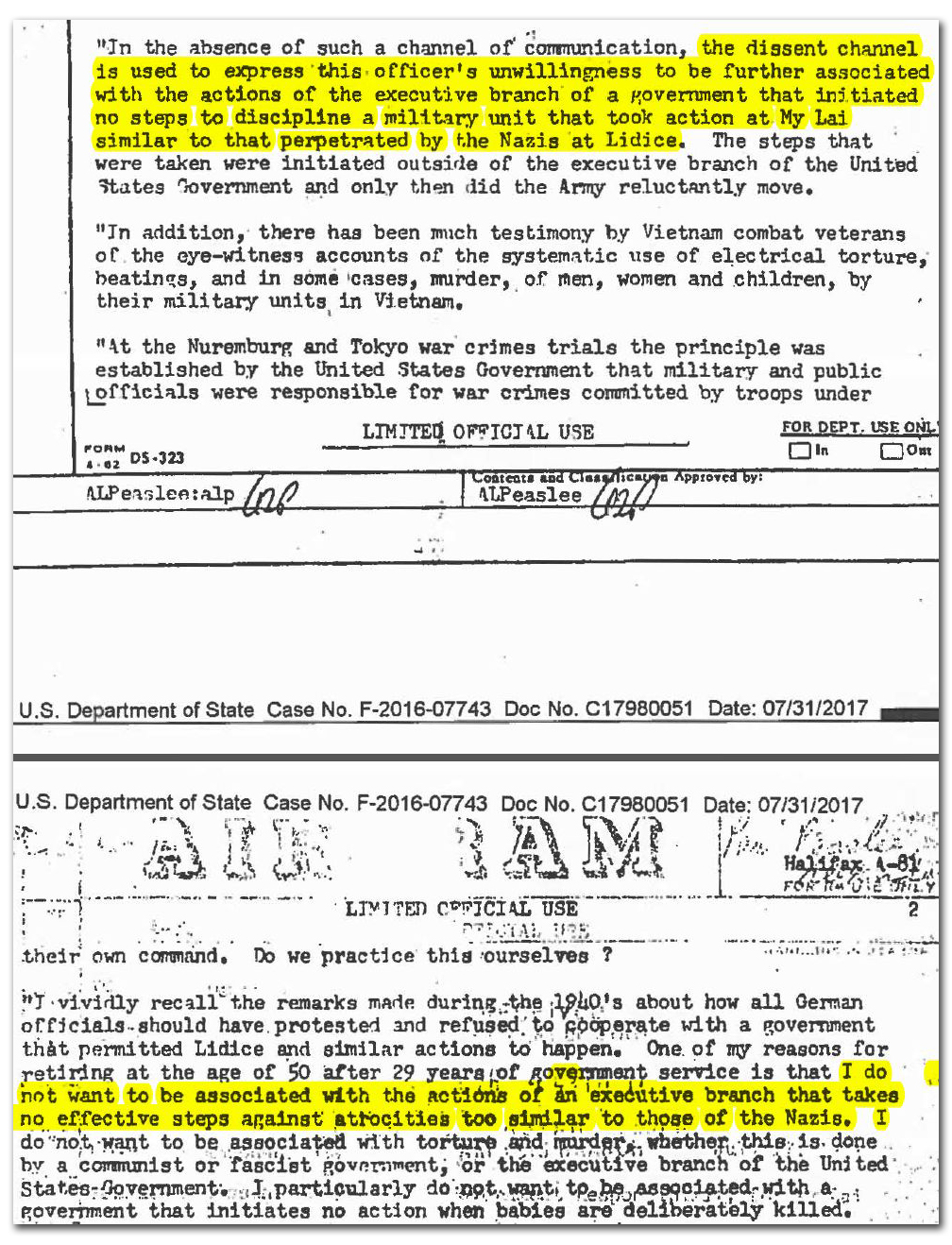 Dissent channel memorandum condemning the inaction of the executive branch "to discipline a military unit that took action at My Lai." 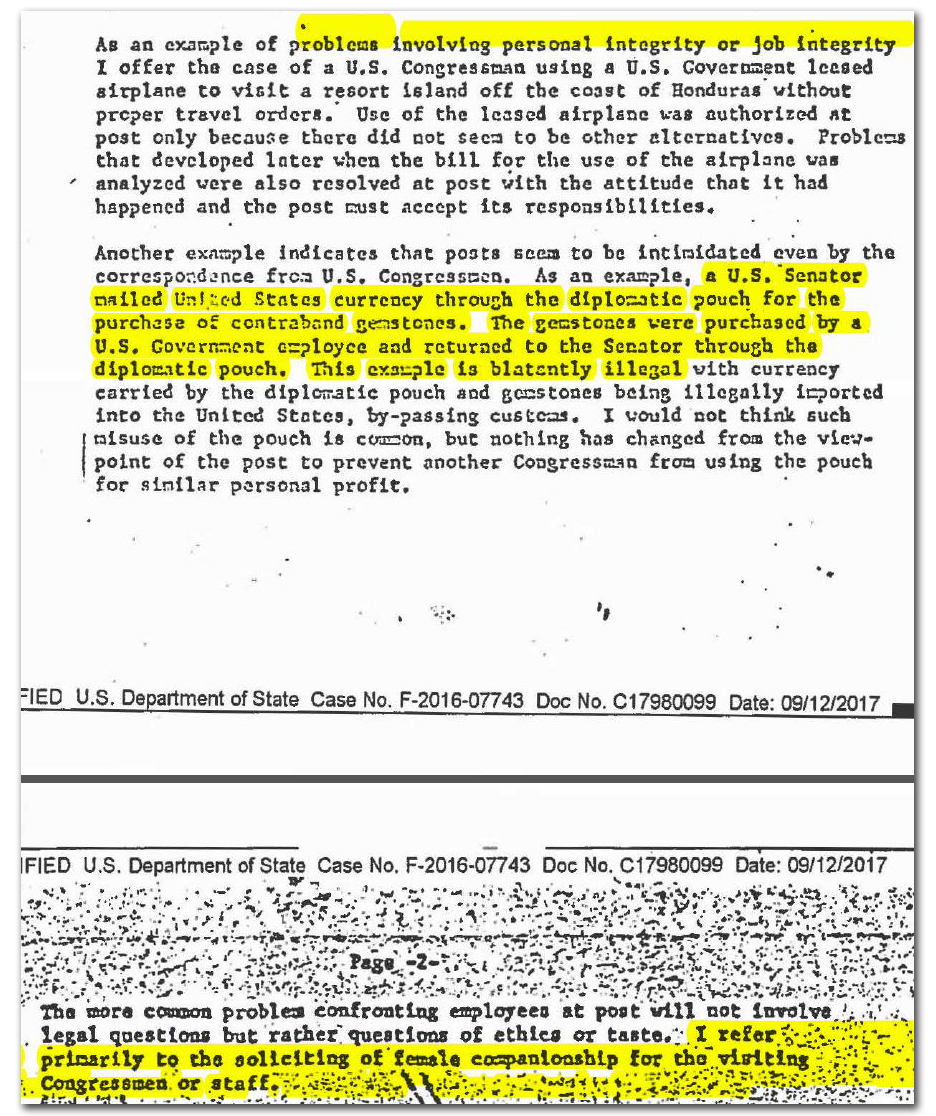 Dissent Channel memorandum from Honduras describing "problems involving personal integrity" including the use of the diplomatic pouch by a senator to smuggle gemstones and the utilization of embassy employees for the "soliciting of female companionship." 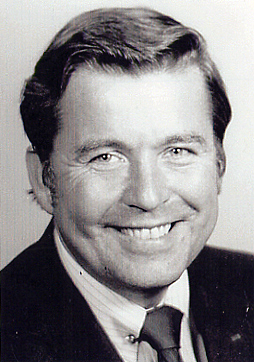 Ambassador Thomas Boyatt, author of the Dissent Cable on US actions in Cyprus and “What if I Disagree? Dissent in the Foreign Service.” 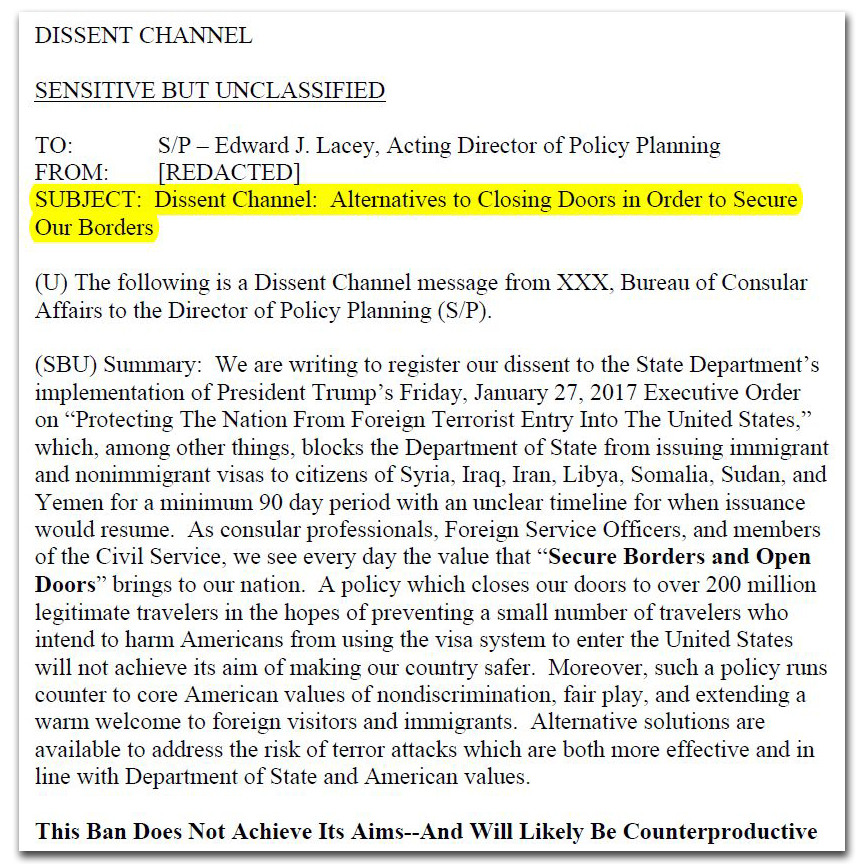 [3] Thomas Boyatt, “What if I Disagree? Dissent in the Foreign Service,” excerpted from Inside a U.S. Embassy, 2011. Boyatt also includes helpful instructions on how to best draft and argue a dissent.

[4] For the full history of the genocide in East Pakistan, the State Department officials reporting it, and Nixon and Kissinger’s support of West Pakistan, read Gary J. Bass, The Blood Telegram: Nixon Kissinger, and a Forgotten Genocide (New York: Alfred A. Knopf, 2013).