New Findings on Clerical Involvement in the 1953 Coup in Iran

“Large Sums of Money” from U.S. Embassy Sent to “Influential People” in Tehran Prior to August 19, Declassified British Memo Alleges 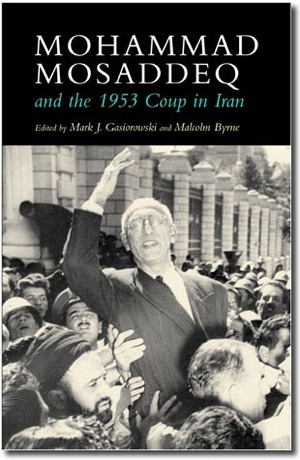 Trump tweets his support for ‘hungry’ Iranian protesters, but might hit them with more sanctions
Think Progress
January 2, 2018

The Trump administration should read its own documents about regime change in Iran
The Washington Post
July 11, 2017

US Quietly Publishes Once-Expunged Papers on 1953 Iran Coup
Associated Press
Jun 29, 2017
Oblivious to History, Trump's Turning Up the Heat on Iran. He Should Look at the 1953 CIA Coup
The Daily Beast
June 26, 2017

US Publishes Official History, New Documents on the 1953 Coup in Iran
IranWire
June 19, 2017

Can Trump Pull a Reagan and Beat Back the Russia Investigations? Lessons from the Iran-Contra Affair
Newsweek
June 6, 2017

Washington, D.C., March 7, 2018 – A passage from a recently declassified document on the 1953 coup in Iran alleges that senior Iranian clerics received “large sums of money” from U.S. officials in the days leading up to the August 19, 1953, overthrow of Prime Minister Mohammad Mosaddeq. The document is apparently British but was located by researchers in files at the U.S. National Archives. It is posted in full today for the first time by the nongovernmental National Security Archive, based at The George Washington University.

The September 2, 1953, British memorandum titled “Persia: Political Review of the Recent Crisis” first appeared in partially declassified form in 1989 in a volume of the State Department’s official Foreign Relations of the United States (FRUS) series. However, that volume excised two key passages for security reasons. Tulane scholar Mark Gasiorowski and BBC correspondent Kambiz Fattahi each independently discovered the unexpurgated version at the National Archives in College Park, Maryland. (Both versions are available here for comparison.)

The exact role of the clergy in Mosaddeq’s ouster is one of the main unanswered questions still surrounding the decades-old coup. Previous accounts by American intelligence operatives and scholarly reconstructions have shown that the CIA planned to provide certain influential mullahs with funds to help organize street demonstrations, but it has never been known whether those payments reached their intended recipients – and if they did, whether the recipients knew the source.[1]

In general, eliciting facts and even reliable sourcing on the 1953 coup is notoriously difficult. The surviving record is far from complete, much of it having been destroyed; and in any case, contemporaneous reporting was spotty and frequently unreliable. This makes it a huge challenge to judge the accuracy of what is still available. In the case of the British memo posted today, even the State Department knows very little about it. A footnote in the FRUS volume reports there is no information about its source or how it reached the department. The most the FRUS editors could say was that it “resembles” a Foreign Office or British Embassy record.

From appearances, the memo, which may be a draft given the existence of several typographical errors, was probably written for a British government audience, though not one authorized to know the full details of the operation, often referred to by its British codename BOOT or its American codename TPAJAX. The document had Top Secret classification yet it omits any reference to U.K. assistance in planning the coup, which suggests its readers were not cleared for that information. It even avoids directly acknowledging other basic facts, such as the U.S. role in the operation, saying only that “sources” have pointed to Washington’s participation. The memo also does not name most of those sources, opting instead for euphemistic references to “reliable reports,” for example.

In recent years, new interpretations of the coup have called into question the accuracy of various U.S. archival records and first-person accounts, discounting the importance of the CIA and British intelligence role in the operation and casting doubt on any connection between Iranian clerics and the Western powers.[2] The principal aim of the latter contention is to bolster the case that Iranians, including leading mullahs, acted essentially (if not entirely) on their own in bringing about Mosaddeq’s ouster.

Today’s posting adds a significant element of British corroboration regarding Washington’s impact on the coup’s outcome. Citing not American sources but “influential people” in Tehran, the memo describes a sense of “jubilation” in the Iranian capital that “the U.S.A. should have come to the country’s rescue,” adding there was “general agreement that, were it not for America’s assistance and guidance, its financial contribution, and its encouragement to the Shah to withstand further humiliation, the plan for the overthrowing of MUSADDIQ’s government could not have succeeded.” (page 8)

On the question of ties between U.S. operatives and certain clerics, there is specific evidence in the two “new” documents. In the first – referred to in FRUS as the British Memorandum – two passages that were previously redacted are now available in today’s posted version. The first and more important is an unnumbered paragraph coming between points 11 and 12 under “Phase I” (page 2). It reads as follows: “According to reliable reports received on 10th August, the American Embassy had secretly handed over large sums of money to certain influential people, including AYATULLAH BIHBIHANI, the well-known ecclesiastic.” The memo does not indicate what this money was for, but the context certainly implies it was to be used for the coup. (BBC correspondent Kambiz Fattahi has reported on this point previously.)

The second redaction is under “Phase II,” in the fifth paragraph of point 7. It is not about Behbehani. However, in the next paragraph, just before point 8 (top of page 5), the document names Behbehani, and cites “well placed sources” indicating he “was responsible for organizing demonstrations” and “knew of the plan” for the coup. Putting these two points together yields strong evidence that the CIA paid Behbehani to organize demonstrations as part of an effort to overthrow Mosaddeq.

The Battle for Iran, the second document posted today (Document 2), includes additional information. Battle, one of three CIA internal histories of the Mosaddeq ouster, has also been published previously in excised form. After a fresh Mandatory Declassification Review request by the National Security Archive the CIA reviewed the document again in 2017 and released additional passages.

This latest version contains two interesting revelations bearing on clerical involvement in the coup. First, at the bottom of page 65, it indicates that the coup plotters tried “to persuade the leading Shia cleric in Qom to declare a holy war against the agents of communism,” but “(n)o definitive results” came of it. This is clearly a reference to Grand Ayatollah Borujerdi and indicates that CIA officials also believed Borujerdi did not play a significant role in the operation.[3]

The second relevant passage is the statement (page 66) that Ayatollah Abolqasem Kashani had organized “(m)any of the people” who comprised the crowds of August 19. This supports recent arguments about clerical involvement in organizing the crowds. There is also nothing in this passage to indicate that Kashani was paid by the CIA team. However, it is important to note that there are redactions before and after this passage which certainly might say this. (On the potential significance of redactions, see also footnote 3.) Without knowing what those excisions contain, at present there is nothing in this document that conclusively contradicts claims that clerics were also acting independently of the CIA team.

To sum up, the two documents posted today provide strong evidence of clerical participation in the coup, specifically regarding Ayatollahs Behbehani and Kashani, while the British memo in particular supports the notion that Behbehani, at least, may have been paid by the CIA to participate in the coup. However, The Battle for Iran offers additional grounds to believe that Borujerdi was not involved in the coup, as some scholars have alleged. While ambiguities still abound, and these documents are far from definitive (especially with key text remaining classified), any legitimate evidence on the 1953 coup that surfaces at this stage is worthy of consideration. 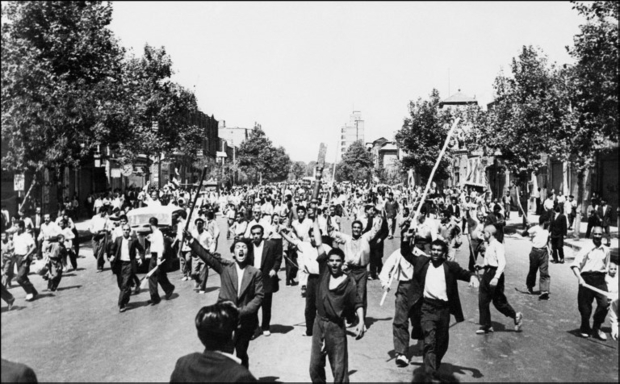 Street crowds have long been a powerful force in Iranian politics, as they were in August 1953. 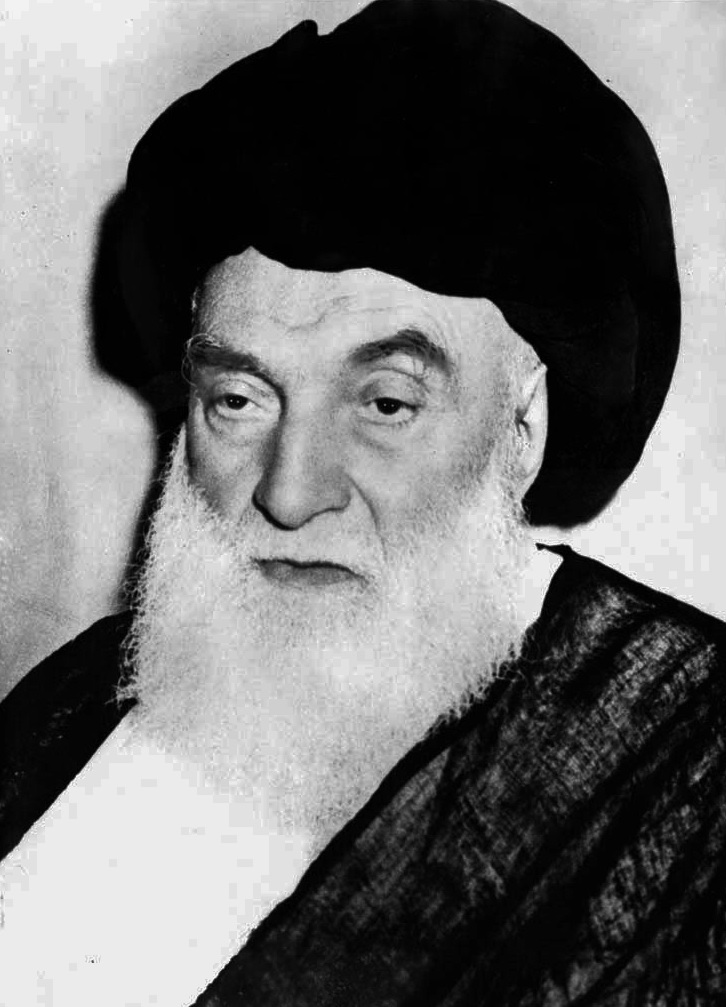 Grand Ayatollah Seyyed Hossein Borujerdi, who by most accounts did not participate in the 1953 coup. 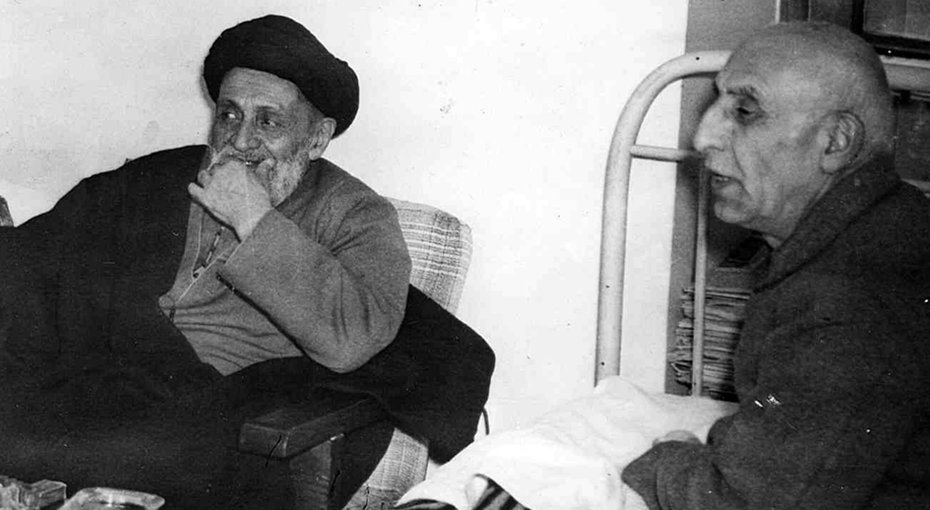 Ayatollah Abolqasem Kashani (left), here with Mosaddeq, was active in organizing demonstrations but there is no strong evidence of his having received funds from the West for that purpose.

[1] For example, two of the CIA participants in the coup interviewed by Gasiorowski in the mid-1980s stated independently that they gave $10,000 to an intermediary to pass to Ayatollah Abolqasem Kashani for the purpose of organizing crowds, but both said they could not be certain that any of this money actually got to Kashani. (Byrne interviewed one of these individuals in 2000; he related the same information.) For an important account of this, see also Donald Wilber’s internal CIA history from March 1954 (Document 1 in the Archive’s Electronic Briefing Book No. 435).

[2] The most detailed explication of this thesis is Darioush Bayandor, Iran and the CIA: The Fall of Mosaddeq Revisited (Palgrave Macmillan, 2010).

[3] This passage is likely based in part on documents now publicly available in the latest FRUS volume on Iran, published in June 2017. See, for example, Document 192, a planning memo entitled “Factors Involved in the Overthrow of Mossadeq,” undated but attached to an April 16, 1953, memo from Chief of Iran Branch (Waller) to Roosevelt. This analysis implicitly recognizes that some Iranian forces would exert an impact on any coup attempt, as evidenced by the title of one section of the document, “Forces which will play a role in any effort to replace Mossadeq and to establish a stable government, and evaluation of their attitude.” That section includes a description of “Religious Elements” but it strongly downplays the likelihood that Borujerdi in particular “could be persuaded” to use his influence in favor of directly supporting the Shah (pages 530, 533-534).
At the same time, the CIA also hoped to be able to steer various elements, including mullahs, in the direction of ousting the prime minister, as is clear from the title of another section, “Assets which may be directed toward the replacement of Mossadeq.” Under that section is a passage on “Religious Assets” but it remains classified in its entirety – 17 lines in all – which suggests that U.S. officials are still reluctant to be specific about possible ties to key clerical figures (pages 535-536).
Another FRUS record, Document 285 – a cable from the Tehran Station to CIA headquarters on August 19, 1953 – features an anxious plea for various kinds of support, including having Iraqi mullahs “cable Borujerdi requesting that he call jihab [jihad] against Communism” (page 698).