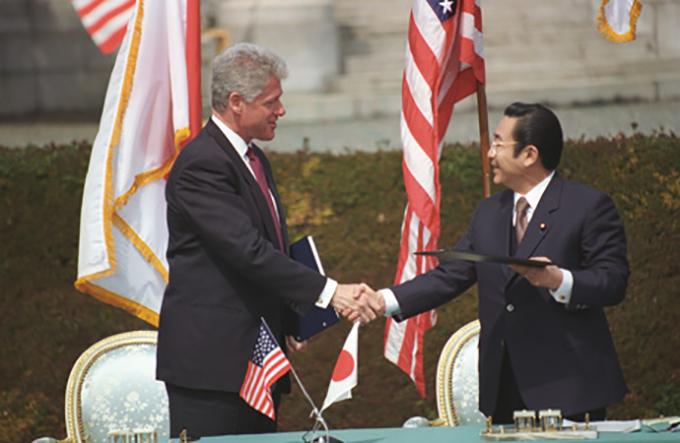 Edited by Dr. Robert A. Wampler 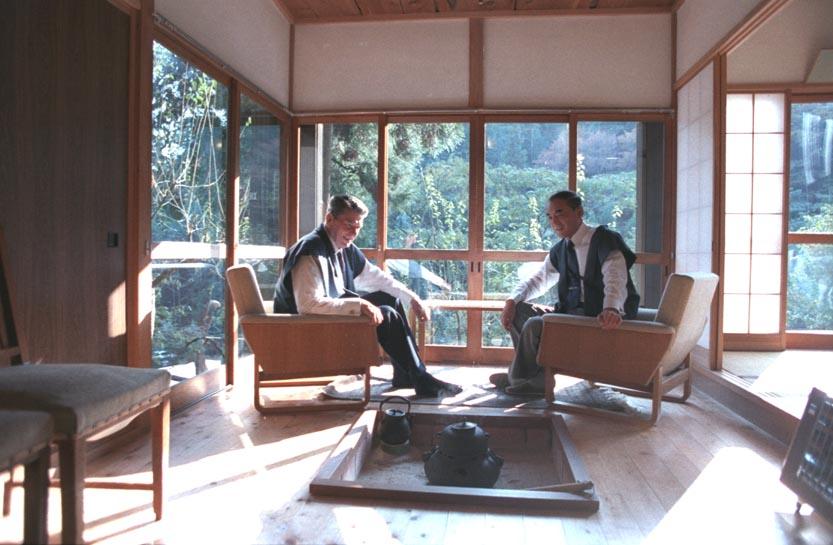 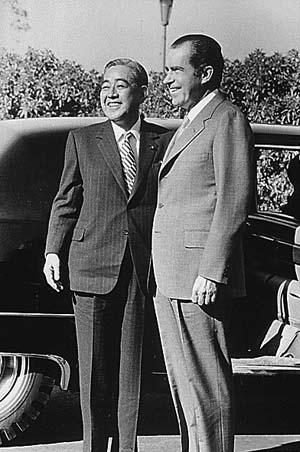 Washington, D.C., June 28, 2019 - A long-standing mutual security treaty between Japan and the United States commits each country to undertake significant military and additional obligations for the benefit of the other, according to declassified records posted today by the nongovernmental National Security Archive as the G-20 meets in Osaka, Japan. The documents provide background for understanding the current U.S.-Japan security alliance, long seen by politicians on all sides in the U.S. as a mainstay in America’s Cold War and post-Cold War strategic commitment to East Asian security and stability.

Today’s posting consists of materials culled from a series of earlier National Security Archive e-books detailing the policy context for U.S.-Japanese security relations.  The Archive is reposting them because they are pertinent to comments by President Donald Trump as he left for the economic summit in Japan earlier this week. The president complained that commitments under the alliance were terribly out of balance. “If Japan is attacked ... we will fight with our lives and with our treasure ... But if we’re attacked, Japan doesn’t have to help us at all. They can watch it on a Sony television, the attack.”[1]

(Meeting in Osaka, President Trump and Japanese Prime Minister Shinzo Abe reportedly agreed to reinforce the “unwavering Japan-U.S. alliance,” according to a Japanese official today, but the official admitted Abe and Trump did not directly address the meaning behind the president’s critical remarks.[2])

The documents posted below present a very different picture of the bilateral arrangement, highlighting the mutual security benefits both Washington and Tokyo saw in agreeing to the defense treaty of 1960, which has been repeatedly reaffirmed. The records also describe earlier U.S. efforts to secure a greater defense contribution from Japan, predating President Trump’s push toward that goal. However, previous administrations always pursued that effort within the larger framework of an alliance that sought to align diplomatic, military, and economic efforts to advance mutual security interests in the region and elsewhere, as the documents show, and never at the expense of these wider goals.

Dating from the signing of the 1960 treaty to security consultations in 2000, the documents posted here provide an important window into U.S. reasons for placing a high value on the security relationship with Japan, despite differences over specific policies and priorities, and the advantages the relationship has provided to both parties. Among the topics covered by the documents are:

Description of Consultation Arrangements Under the Treaty of Mutual Cooperation and Security with Japan [part of briefing book prepared for Secretary of State Herter] ca. Jujne 1960

The first two documents, which were prepared for Secretary of State Christian Herter to use in testifying before Congress on the 1960 Security Treaty, lay out the essential terms of the agreements reached on consultation with respect to the U.S. military forces based in Japan. The first establishes that the introduction of nuclear weapons into Japan, or the constructions of bases in Japan for nuclear weapons and related arms, such as intermediate and long-range missiles, does require consultation with the Japanese government. This document also discusses the secret prior consultation and agreement on the use of U.S. forces based in Japan to meet a military emergency in Korea.

Summary of Unpublished Agreements Reached in Connection with the Treaty of Mutual Cooperation and Security with Japan.

This National Security Decision Memorandum, based on the studies carried out in NSSM 5, laid down the U.S. policy objectives with respect to Japan. With respect to the negotiations on Okinawa, the U.S. goals were an agreement that addressed the U.S. "desire to retain nuclear weapons on Okinawa, but indicating that the President is prepared to consider, at the final stages of negotiation, the withdrawal of the weapons while retaining emergency storage and transit rights, if other elements of the Okinawan agreement are satisfactory." Again, this mirrors what Prof. Wakaizumi described as the agreement reached.

Here again Korea and China are at the forefront of the issues discussed, as Brown and Sonoda discuss the uncertainties surrounding Beijing's intentions regarding Taiwan and how this issue complicated moves towards normalization of U.S.-China relations as well as those surrounding South Korea's future economic development

This briefing book provides the schedule of events, background information, objectives, and other materials that were used in preparation for the eleventh Japan-U.S. Security Subcommittee meeting, a forum for exchanging views on a regular basis that became increasingly important after the two nations adopted the Guidelines on Defense Cooperation in 1978. The topics covered include briefings for the Japanese on the second round of Strategic Arms Limitation Talks (SALT II), NATO, the Middle East, the security situation in East Asia, joint military planning, the U.S. presence in Asia, defense cost (or burden) sharing, and defense technology cooperation.

Among the key U.S. goals for the meeting were to reassure Japan that the US would remain a Pacific power while encouraging Japan to make a greater effort in the security sphere; to increase Japanese awareness of mutual global security concerns in connection with SALT; the Middle East (centered on access to oil); Southeast Asia; relations with China; and the growth of Soviet conventional, particularly naval, power in the Pacific and Indian Oceans.

This nearly verbatim account of the Japan-U.S. Security Subcommittee meeting illustrates how the U.S. representatives pursued the wide range of issues and goals outlined in the briefing book above. Among the interesting points are the clear signs of continued Japanese concern about a future U.S. military presence in the Pacific/East Asia; the U.S. interest in drawing the Japanese into discussion of possible increased Japanese security spending and commitments, particularly the delicate issue of Japanese contributions to peace-keeping operations (which would become more urgent during first Gulf War, as shown in documents below); and an exchange of views on the possibility of a North Korean attack, with Japanese intelligence assessments indicating that Pyongyang might attack if it could get Soviet or Chinese support. Another topic that would become more pressing in the decade ahead was the different U.S. and Japanese views regarding joint development vs. purchase of military technology, with a particular focus on the next generation of fighter aircraft, in which are visible the seeds of the FSX controversy.

In this document, Defense Secretary Weinberger lays out for President Reagan the administration's line of argument for pressing on visiting Japanese Prime Minister Suzuki the U.S. goals for increased Japanese defense spending. Weinberger argues that the U.S. has failed in past efforts because, according to the Japanese, it never spelled out what specifically the U.S. wanted Japan to do. To begin this process of educating the Japanese, Weinberger provided Reagan with talking points for his upcoming meeting with Suzuki.

This memorandum underscores the way in which persistent U.S.-Japan trade conflicts were threatening to undermine continued cooperation on defense issues, in particular the U.S. push for increased Japanese defense spending. A common problem for both governments was growing problems with legislators, in Congress and the Diet, who were creating domestic political obstacles for Reagan and Prime Minister Nakasone over trade issues. For Nakasone, this was a particular problem, given his efforts to overturn the existing limits on Japanese defense spending.

After several exchanges by telephone, Bush and Kaifu are finally able to meet in person to discuss the Iraq crisis as well as other issues. The conversation ranges from Tokyo's support of U.S. troops stationed in Japan, to the Uruguay Round of trade talks, and other topics. Bush continues pressing Kaifu on securing a Japanese contribution to the military effort, as well as on increasing host nation support for U.S. forces in Japan. The talk also turns to relations between Tokyo and Moscow, and Kaifu's hopes that the upcoming visit by Soviet leader Mikhail Gorbachev visit will create an opening on the Northern Territories issue and the long-postponed peace treaty marking an official end to hostilities between the two countries after World War II.

In this cable Ambassador Armacost provides his sober assessment of Japan's response to the challenges posed by the first Gulf Crisis. Stressing Japan's essentially "passive" approach to the Gulf War, the debate over Japan's post-Cold War role in the world, and the still unanswered question of whether Japan's political and bureaucratic system can handle new challenges, Armacost rates Japan's response as "not unsuccessful by the standards of Japan's foreign policy of the last forty five years" - not exactly a ringing endorsement. He feels the crisis did serve to highlight the obstacles to a mature Japanese foreign policy, as well as the inadequacy of limiting Japan's role to sending money without taking on the risks and responsibilities associated with being a great power.

This document provides more details on the U.S. goals and concerns surrounding the future of U.S.-Japan security cooperation in the 21st century. The broad areas of concern include the long-term dialogue with Tokyo on the future of the alliance, China, and regional cooperation in Asia on security issues. Regarding the future of the alliance, the Pentagon wants to use Japan's Mid-Term Defense Plan and the U.S. Quadrennial Defense Review as the basis for a long-term dialogue. As the brief lays out the overall objective: "This is not about the U.S. asking Japan to do more as has been the case sometimes in the past. Rather it is about asking ourselves what kind of alliance will best serve as the foundation for regional stability for the next forty years." One specific goal is to push Japan to increase its role in international peacekeeping. While the U.S. believes the region is becoming more accepting of such a Japanese role, Washington recognizes the uncertain public support in Japan for this, being well aware of the ongoing debate over the future course and nature of the country's strategic role in the world.

Regarding China, the brief notes again the efforts to smooth the waters after the accidental bombing of the Chinese embassy in Belgrade. Longer-term concerns are underscored by the tough political rhetoric in the recent China Defense White Paper, which will more likely feed rather than dampen those who are warning of a rising "China threat," and the perception that the Chinese military is hawkish and pressing a hard line regarding the U.S., Taiwan and Japan. In part to address these concerns and, if possible, engage Beijing in a more cooperative relationship, the U.S. had launched the Asia Pacific Regional Initiative to support development of a regional defense initiative to promote multinational activities to address nontraditional security threats and contingencies. As the brief emphasizes, political, economic and social transitions in the region will produce new security challenges that cross borders and affect common security. Underscoring that multilateral initiatives will not diminish existing bilateral relationships, but will address the reality that any military action taken in Asia will have to be multilateral in nature, the brief also makes a point of noting that China is not to be excluded, but is a potential partner.

Japan and the United States: Diplomatic, Security, and Economic Relations, 1960-1976
Available through ProQuest

Japan and the United States from Kennedy to Clinton
June 20, 2012