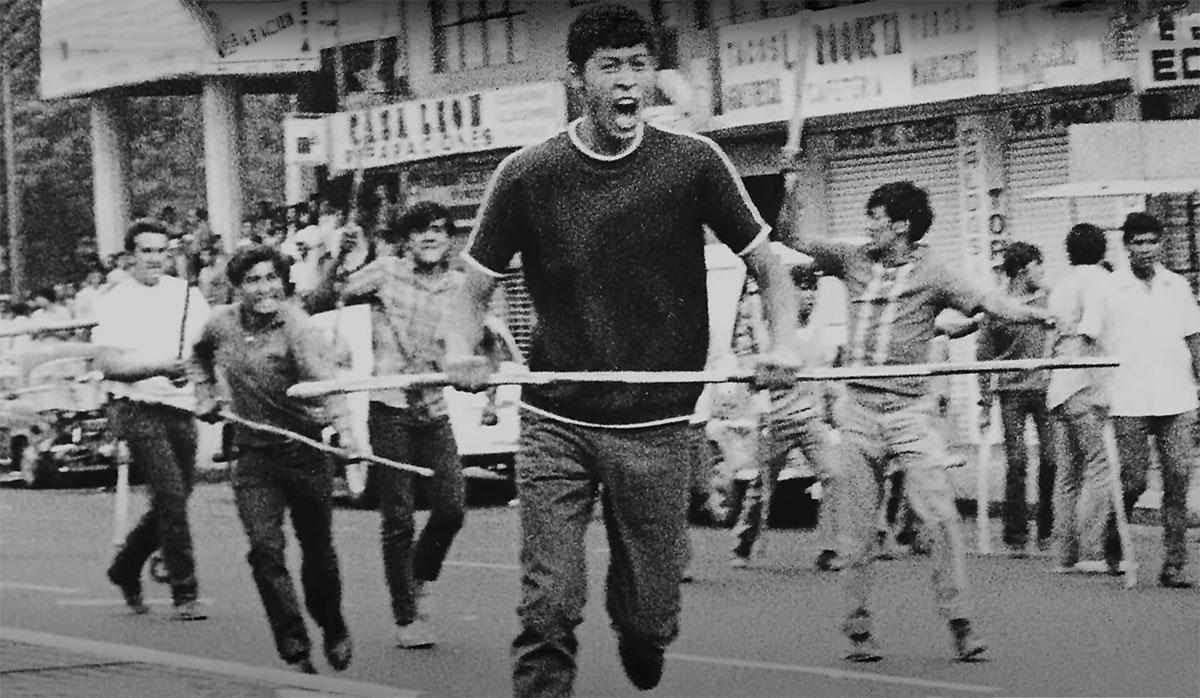 U.S. ambassador in 2002 hoped “images of a former president being hauled in to testify” would mark “victory for those who seek a more transparent and accountable government” 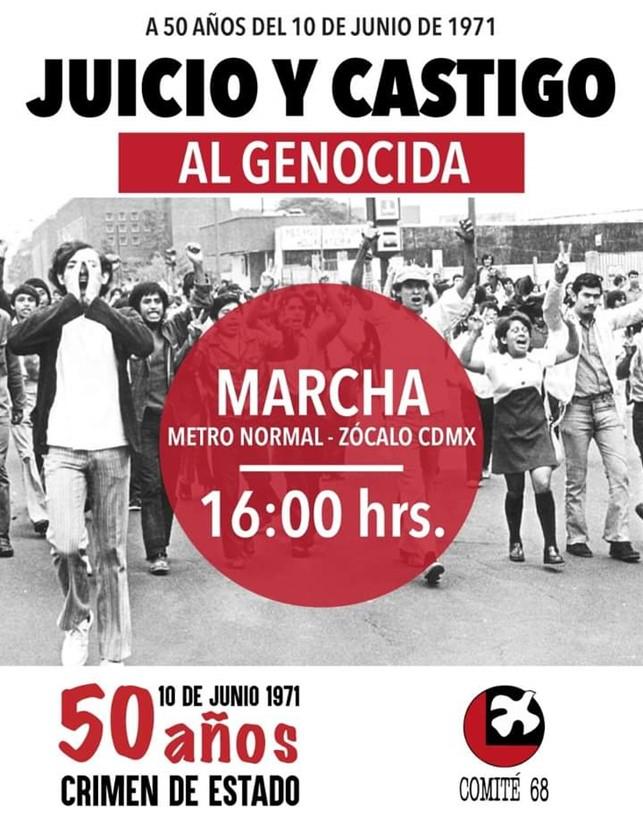 An invitation to this year’s commemorative march held by Comité 68, a group of survivors of the 1968 student movement.
Credit: Antropólogos e Historiadores 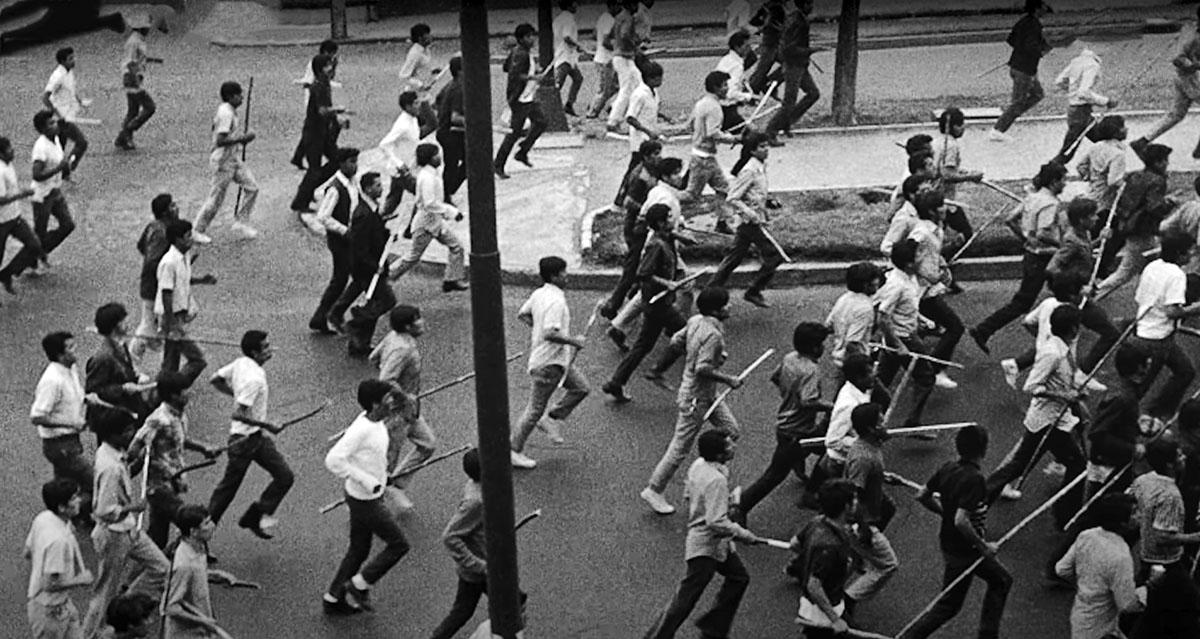 Washington D.C., June 10, 2021 – Fifty years ago today, a group of pay-for-hire thugs known as the “Halcones” or “Falcons” swarmed the streets of Mexico City in a coordinated attack against some 10,000 student demonstrators. Wielding rudimentary weapons including chains and bamboo sticks, the Halcones violently dismantled the protest in a bloody clash that left dozens of students dead and more than one hundred injured – all as police turned a blind eye. The 1971 Corpus Christi Massacre, or Halconazo, was then-President Luis Echeverría Alvarez’s response to the first large-scale student protest since 1968, a year marked by its own tragic massacre at La Plaza de las Tres Culturas at Tlatelolco, Mexico City.

In the decades since the attack, survivors and families of the victims continue to seek justice; yet their calls remain unanswered. Despite a five-year investigation by the Office of the Special Prosecutor for Social and Political Movements of the Past (Fiscalía Especial para Movimientos Sociales y Políticos del Pasado – FEMOSPP), whose official report on Mexico’s Dirty War included a chapter specific to the Corpus Christi massacre, the Mexican Government has failed to land a single conviction in this case. Instead, the impunity that shrouded the 1971 attack was echoed year after year, resulting in the State’s proven inability to prosecute human rights crimes even today.

Marking the 50th anniversary of this massacre, today the National Security Archive is publishing additional records to expand upon our previous set of 40 documents made public in 2003. Released in response to the Archive’s Freedom of Information Act requests, these new documents provide a glimpse into U.S. perceptions of the attempted prosecutions against Echeverría, his interior secretary, Mario Moya Palencia, and former mayor of Mexico City Alfonso Martínez Dominguez. The records also demonstrate how unprepared Special Prosecutor Ignacio Carrillo Prieto was to achieve justice in these cases, noting concerns held by legal observers. In 2006, the FEMOSPP closed for good, thereby eliminating a recourse to hold responsible officials accountable.

When President Echeverría took office in 1970, it seemed as though his slate had been wiped clean. His predecessor, Gustavo Díaz Ordaz, assumed responsibility for the violence surrounding the 1968 student movement, effectively overlooking Echeverría’s own role during his tenure as secretary of interior. The new president worked to placate remaining tensions, increasing government subsidies for Mexican universities, and welcoming former members of the 1968 student movement into his cabinet and advisory council. Such efforts were intended to repair the regime’s relations with students and faculty and avert the possibility of further resistance.

While Echeverría initially promised a departure from the Díaz Ordaz regime’s hardline approach, a wave of new student protests quickly challenged this commitment. Students held a demonstration at the Autonomous University of Nuevo León in Monterrey in early May to protest a new series of restrictive bylaws imposed by the state congress. In response, the governor of Nuevo León deployed police forces to occupy the campus – a decision that exacerbated the conflict and prompted Echeverría’s intervention. And although the president annulled the bylaws, students elected to move forward with a previously planned demonstration in Mexico City, demanding respect for the university’s autonomy.

As thousands of protesters marched on that Corpus Christi Thursday from the National Polytechnic Institute (IPN) in the Casco de Santo Tomás, plain-clothes paramilitaries began to arrive in buses and private cars, launching their attack at around 5:00 in the afternoon. In an escalation of this violence, the Halcones cut off access to the nearest subway station and infiltrated hospitals to seize victims. The government’s official record acknowledges just 11 fatalities, though witnesses and human rights groups claim the number is far higher.

In the immediate aftermath, President Echeverría demanded an investigation into the attack, which led to the resignation of Mayor Martínez Domínguez. Yet the president himself has never offered a credible explanation for the attack, refusing to answer questions during two hearings in 2002 before Special Prosecutor Carrillo Prieto. At most, Echeverría has acknowledged the existence of the Halcones and that mistakes “may have been committed,” though he denies any personal responsibility for the attacks. [Document 1]

Despite those claims, the special prosecutor took the unorthodox decision to pursue genocide charges against Echeverría and Interior Secretary Moya Palencia, gaining a brief victory in 2005 when Mexico’s Supreme Court ruled the statute of limitations for both officials had yet to expire. [Document 5] Unlike lower-ranking officials who did not enjoy immunity during their time in office, the Court determined that Mexico’s 30-year statute of limitations would begin in 1976 for Echeverría and Moya Palencia – the end date of their respective terms in office. Yet the special prosecutor’s efforts remained marred by political and judicial battles, including objections from the longstanding PRI party, which feared a domino effect should senior government officials “implicate their then-colleagues, many of whom are still active in politics, to save themselves.” [Document 4]

The case was dealt a fatal blow in January 2006, when the Supreme Court voted not to hear appeals of a lower-court decision that dismissed charges due to insufficient evidence. Months later, as President Vicente Fox wound down his six-year term, the Special Prosecutor’s Office was closed without fully clarifying the crimes of the past. The window once opened for government investigations into the Corpus Christi Massacre closed as well, and Echeverría was never officially tried for his role in the attack.

This past March, Mexico’s Undersecretary of Human Rights Alejandro Encinas promised to propose to President Andrés Manuel López Obrador a new truth commission to investigate crimes committed during the Dirty War. With a focus on identifying perpetrators that are still alive, the commission would ensure access to facilities used for torture and disappearances. It would also guarantee access to information maintained by Mexico’s archives – a stark departure from the reclassification and censoring of previously public records maintained by Mexico’s General Archive of the Nation (Archivo General de la Nación – AGN).

While President López Obrador has issued his own call not to forget the Halconazo, whether the current administration is willing and able to create this commission remains to be seen. The documents published today demonstrate that justice through trial and conviction may no longer be possible. Yet in its place, providing truth about State violence – including that committed during the Corpus Christi Massacre – remains an essential first step in chipping away at the ever-entrenched impunity enjoyed by those who planned and executed this violent attack.

This cable describes Special Prosecutor Ignacio Carrillo Prieto’s questioning of former president Luis Echeverría about his role in the June 10, 1971, Corpus Christi massacre. Much like his first testimony, Echeverría refused to answer the special prosecutor’s questions, electing instead to hold an interview with the press later that day. During this meeting with reporters at his home, the former president recognized mistakes “may have been committed” but maintained his innocence. Blaming the former head of the Federal District (DF) Government, Alfonso Martínez Dominguez, for the Corpus Christi attacks, Echeverría “admitted knowledge of the para-military/para-police groups named ‘Brigada Olimpia’ and ‘Halcones,” while also reiterating “that he ordered the ‘Halcones’ to be disbanded the day after the June 10 attack.”

In addition to describing potential limitations in the case against Echeverría, Ambassador Davidow also notes that “the visual images of a former president being hauled in to testify and being openly scorned and mocked have had a stirring effect on Mexican society. In the war against impunity being waged by the Fox administration and civil society, Echeverria's audience marks a tactical if not strategic victory for those who seek a more transparent and accountable government.”

As part of an Assistant Secretary Daily Activity Report (ASDAR), the State Department’s Bureau of Western Hemisphere Affairs highlights President Luis Echeverría’s second appearance before Special Prosecutor Ignacio Carrillo. Echeverría had been called to testify about his role in the “Jueves de Corpus” killings on June 10, 1971, but refused to answer questions. Instead, during an interview with the press later that day, Echeverría “denied any personal responsibility for human rights abuses,” deeming former President Gustavo Díaz Ordaz as “partly” responsible for the 1968 Tlatelolco massacre and blaming Mexico City Mayor Alfonso Martínez for the 1971 Corpus Christi massacre.

This cable details the political and legal battles surrounding efforts to prosecute former President Luis Echeverría and other former government officials accused of abuses during Mexico's Dirty War. Referencing both “political as well as judicial battles” surrounding Special Prosecutor Ignacio Carrillo Prieto’s efforts, the cable describes a judge’s refusal to issue an arrest warrant against Echeverría for crimes of genocide and abuse of authority due to Mexico’s 30-year statute of limitations. It also notes objections by the PRI, which would prefer to close the Dirty War chapter. As Ambassador Garza describes, “Mexico's former presidents have been protected from prosecution and the PRI is no doubt worried about setting a new precedent … Should Echeverria or other former senior government officials face the possibility of jail, they could begin to implicate their then-colleagues, many of whom are still active in politics, to save themselves: something the PRI desperately wants to avoid.”

Here, the U.S. Embassy reports on the slow judicial progress by the Special Prosecutor's Office in prosecuting Mexico’s political crimes of the past. The cable describes how efforts to charge former President Echeverría with genocide stalled in 2004 following a lower-court’s ruling that there was insufficient evidence to sustain charges of genocide. Yet in his appeal to Mexico’s Supreme Court, Special Prosecutor Ignacio Carrillo Prieto is believed to have argued that charges of genocide do not rest upon the number of victims of the 1971 Corpus Christi massacre but on the Mexican State's concerted effort to eliminate a specific group of individuals. Ambassador Garza notes how Carrillo has allegedly put forward this case “using in part declassified U.S. government documents collected by the NGO National Security Archives,” with a ruling anticipated as early as February 2004.

The U.S. Embassy in Mexico describes the Mexican Supreme Court’s ruling that former President Luis Echeverría and Interior Secretary Mario Moya can be prosecuted for their respective roles in the 1971 student murders. Specifically, the Court ruled that since both officials enjoyed immunity from prosecution until the end of their term in office, Mexico’s 30-year statute of limitations would be applied starting in 1976 (rather than the date of the murders). In contrast, lower-ranking officials who did not enjoy immunity would be spared prosecution as the statute of limitations for their role had since expired. Ambassador Garza highlights additional constraints: namely, doubts that Special Prosecutor Carrillo will convince lower courts that the 1968 and 1971 massacres constitute genocide as well as Mexico’s slow moving judicial system, which stands to inhibit prosecution before the statute expires. In a foreshadowing of next steps, Ambassador Garza’s concluding comment states, “Mexican law reportedly prohibits preventive detention of anyone over 70 – Echeverria is 86. He won't go behind bars unless and until he is found guilty, and the clock may run out first.”

In the fourth and final cable in a series assessing President Vicente Fox’s legacy, Ambassador Bassett describes achievements and limitations during Fox’s six years in office. Within a section on the president’s human rights initiatives, the cable describes the creation of the Special Prosecutor’s Office to investigate human rights violations that occurred during the Dirty War. In particular, Ambassador Bassett notes how “investigations into the alleged massacres of student protesters in 1968 and 1971 largely ran into dead ends and the dogged pursuit of former president Luis Echeverria on charges of genocide proved elusive.”

The Dead of Tlatelolco: Using the archives to exhume the past

Tlatelolco Massacre: U.S. Documents on Mexico and the Events of 1968 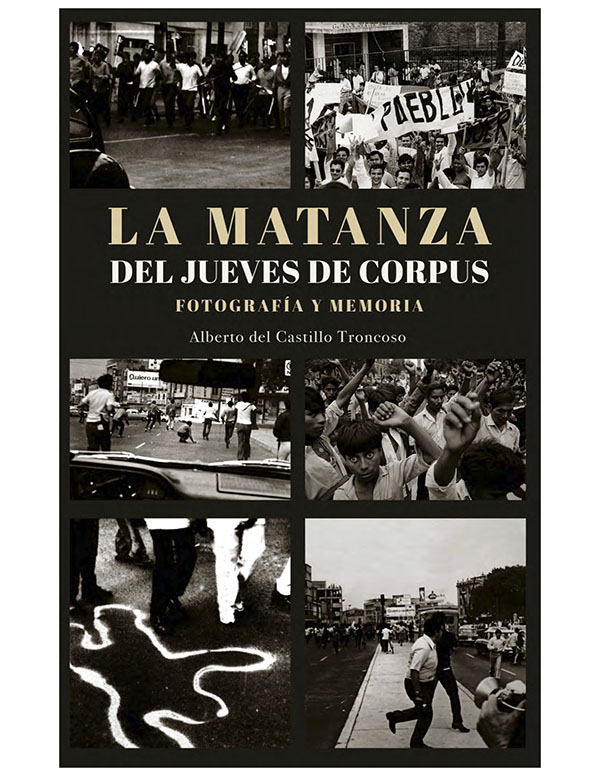