Getting to Know the Cubans: Khrushchev Meets the Castro Brothers 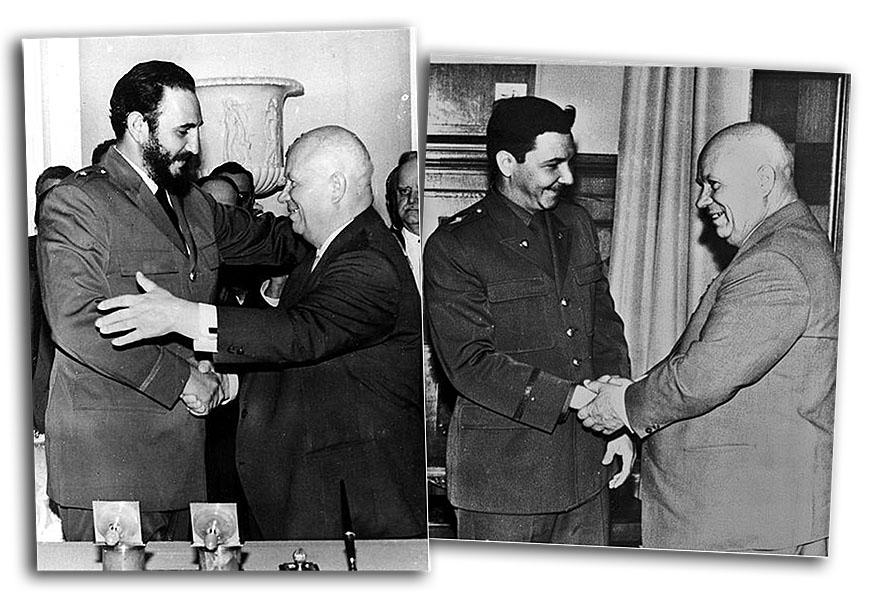 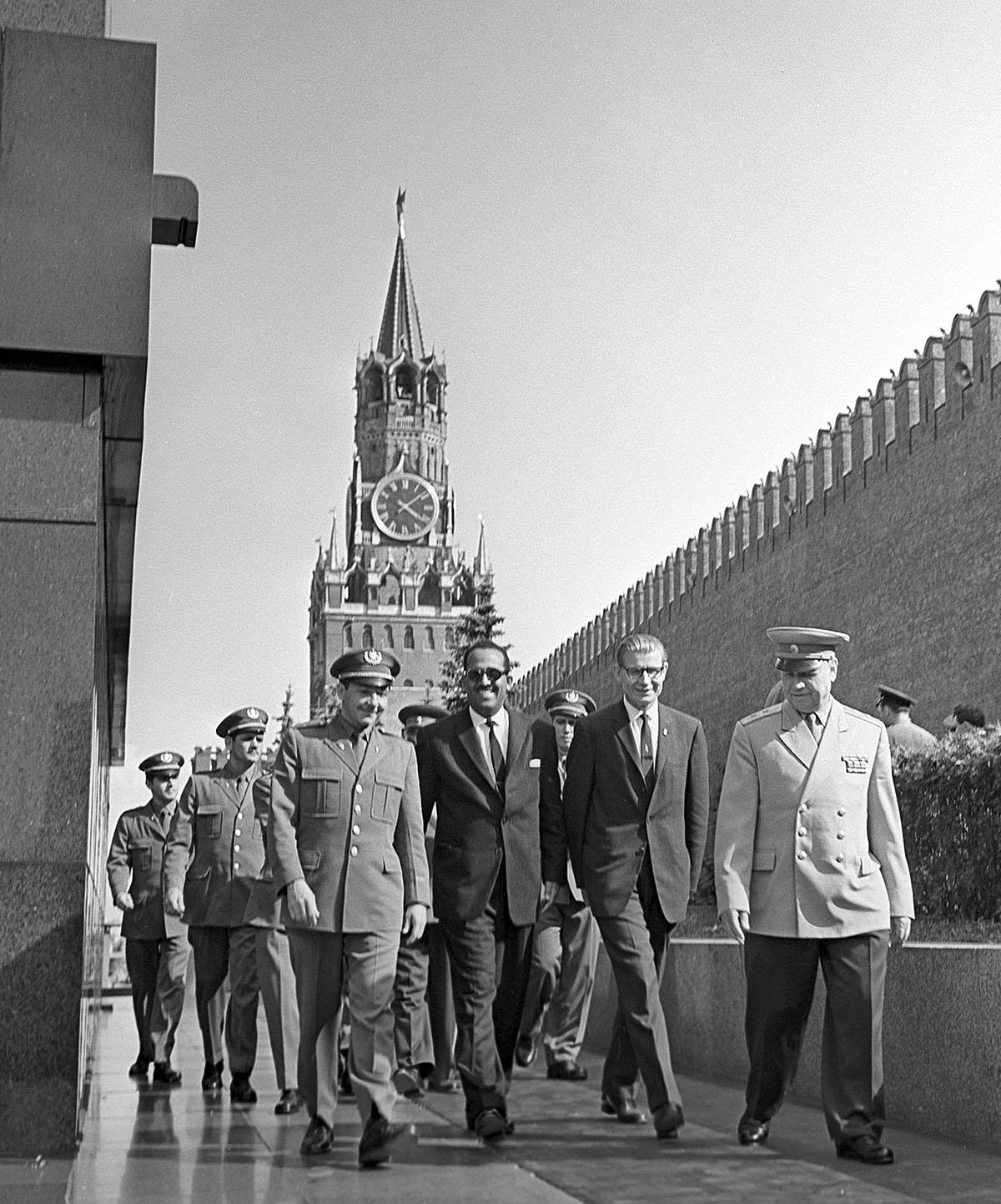 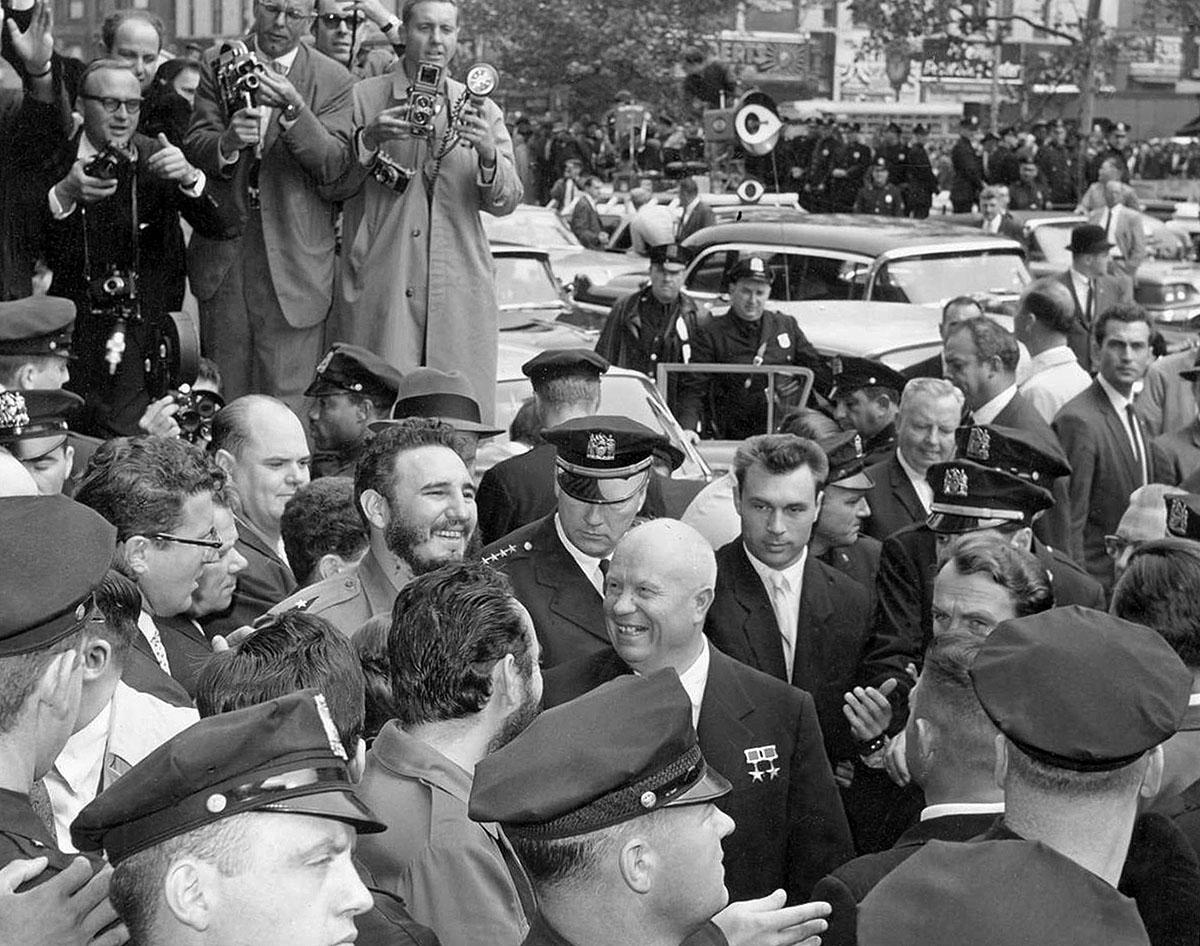 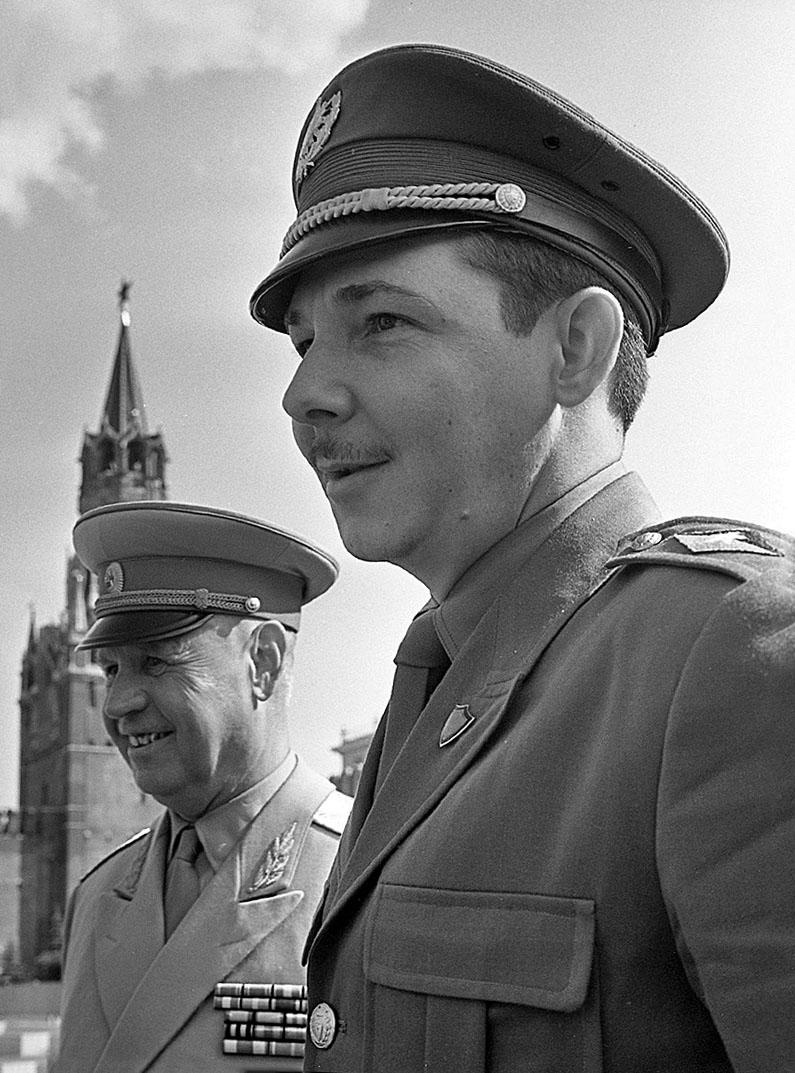 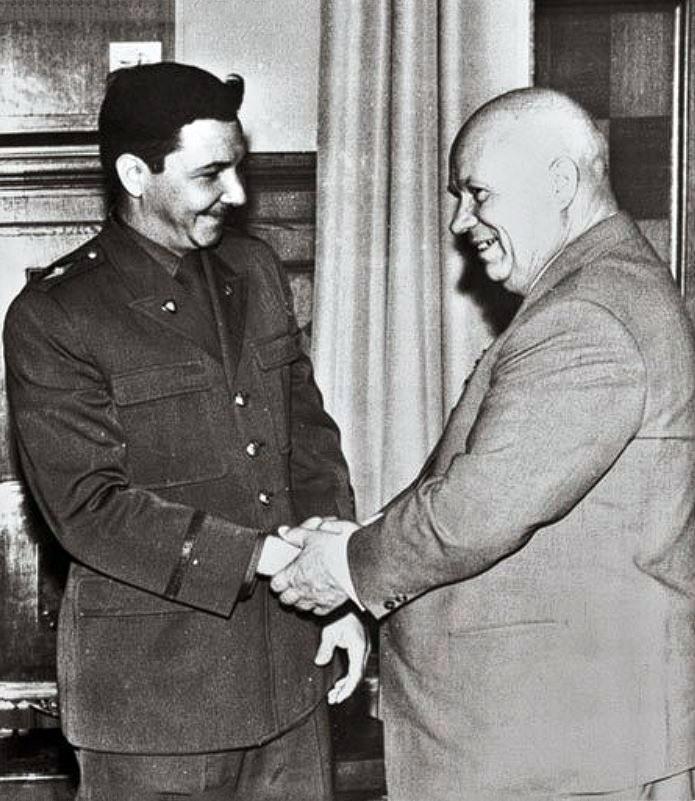 Visiting defense chief Raul Castro (at left) greets Khrushchev in the Kremlin Palace on July 3, 1962, a day after signing a secret pact to allow nuclear missiles into Cuba. (Smithsonian Magazine)

Washington, D.C., October 14, 2022 - Today the National Security Archive publishes for the first time in any language a translation of the first meeting between Soviet Premier Nikita Khrushchev and Cuban Defense Minister Raul Castro on July 18, 1960. The newly available transcript helps explain Khrushchev’s 1962 determination that defending Cuba from U.S. intervention would require a massive Soviet military base in Cuba, together with the deployment of nuclear weapons. The Cuban leader asks for details of how the USSR could protect Cuba, but Khrushchev insists on restraint and flexibility, saying that he does not want a “big war.”

In 1960 the Soviet leadership admired the Cuban revolution from across the globe and wondered about the future of this movement, which arose without any help from the USSR. In February 1960, Deputy Prime Minister Anastas Mikoyan visited Cuba, met the entire political leadership, and brought home good news: the barbudos (bearded revolutionaries) were leading a genuine anti-imperialist movement that, with time, would turn socialist, especially with help from the Soviet Union. The Soviet leader was charmed by the youthful energy of the Cuban revolution.

Mikoyan’s visit opened doors to multiple visits to Moscow from Cuban delegations. The Cubans were eager to find out how life was in the first socialist country in the world and to learn from the Soviet experience. The U.S. decision to impose an economic blockade on Cuba had pushed the Castro regime even closer to the Soviet Union, even though Fidel Castro and the majority of the Cuban leadership were not Marxists. The Cubans were concerned that the northern neighbor would launch an invasion to get rid of the new revolutionary government.

Suddenly, in the middle of the summer of 1960, Khrushchev made a very strong statement that seemed to suggest that, in the case of a U.S. intervention, the Soviet Union was willing to defend the Cuban revolution with all military means at its disposal:

“It should not be forgotten that the United States is not so inaccessibly distant from the Soviet Union as it used to be. Figuratively speaking, in case of need Soviet artillerymen can support the Cuban people with their rocket fire if the aggressive forces in the Pentagon dare to launch an intervention against Cuba. And let them not forget in the Pentagon that, as the latest tests have shown, we have rockets capable of landing directly in a precalculated square at a distance of 13,000 km. This, if you will, is a warning to those who would like to settle international issues by force and not by reason.” (Foreign Relations of the United States, 1958-1960, Cuba, Volume VI, editorial note 549)

Nuclear boasting aside, in his first face-to face meeting with Raul Castro, Khrushchev was, actually, very careful not to incite the Cubans to take steps that might invite U.S. intervention. When Raul Castro came to Moscow for clarification of the Soviet assurances and to invite Khrushchev to visit Cuba, the Soviet leader tried to steer his visitor away from radical measures telling him that, after the Soviet statement, the United States, “most likely, will not launch an intervention against you.” The Soviet leader counseled the Cubans to be thoughtful and flexible, to work through the Organization of American States and try to win over public opinion in Latin America.

Rather than give the Cubans any specific details about Soviet military assurances, Khrushchev told them not to rush. The Soviet leader told his visitors: “We will try to do everything to not allow intervention against Cuba. But we do not want war. However, one has to keep in mind that one could unleash a big war defending Cuba.”

The July meeting with Raul set the stage for Khrushchev’s friendly, though far less substantive, meeting with Fidel Castro two months later during a meeting of the U.N. General Assembly in New York City.

Raul Castro visits Moscow to thank Khrushchev for his powerful statement of support for the Cuban revolution on July 9 and to inquire about the extent of the promised Soviet assistance. One can see a relationship between future allies tentatively emerging as both sides learn to trust each other. Referencing Khrushchev’s ealier commitment to defend Cuba, Raul passes an oral request from Fidel Castro to Khrushchev to specify “to what extent actions of the Soviet Union could be decisive.” He repeatedly emphasizes that the U.S. imperialists had not given up their plans to invade Cuba.

Khrushchev’s response is very cautious. He talks about Soviet willingness to support Cuba economically, even “to take responsibility for supplies of oil and other goods in the amounts that would fully satisfy Cuban needs in exchange for Cuban products.” He would make good on his prior commitment to buy the entire 700,000 tons of sugar that the U.S. refused to buy, adding that the U.S. blockade “is doomed to fail.” The Soviet leader says he understands that the Cubans want to know about the military dimension of the Soviet support, and specifically whether the USSR is actually willing to extend its nuclear security guarantees to Cuba, as Khrushchev’s statement seemed to imply. On this issue, the Soviet leader is extremely cautious, saying: “you, the leadership of the Cuban republic, should restrain yourself so that you do not let yourself be provoked.”

Khrushchev praises Cuban flexibility in deciding not to nationalize U.S. property immediately, suggesting that they should stay in the Organization of American States and that Castro should put away his fears and act as if he believed the U.S. would not invade Cuba. The Soviet leader is vague on the specifics of a possible response to a U.S. invasion, saying that “if you had common borders with the USSR, events would have taken a different course, but as we know, you border the United States.”

After meeting Fidel’s brother Raul in Moscow, Khrushchev decided to use the opportunity of the U.N. General Assembly session in New York to meet with Fidel Castro at the Cuban leader’s hotel in Harlem, a gesture much appreciated by Castro. The short conversation is full of expressions of solidarity, anti-imperialism, and mutual respect between Cuban and Soviet people. The conversation is short on substantive detail but creates positive chemistry and lays the basis for further deepening in the relationship between the two countries. 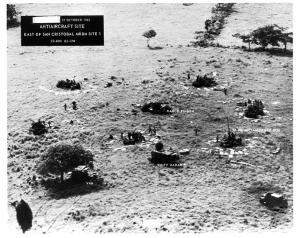