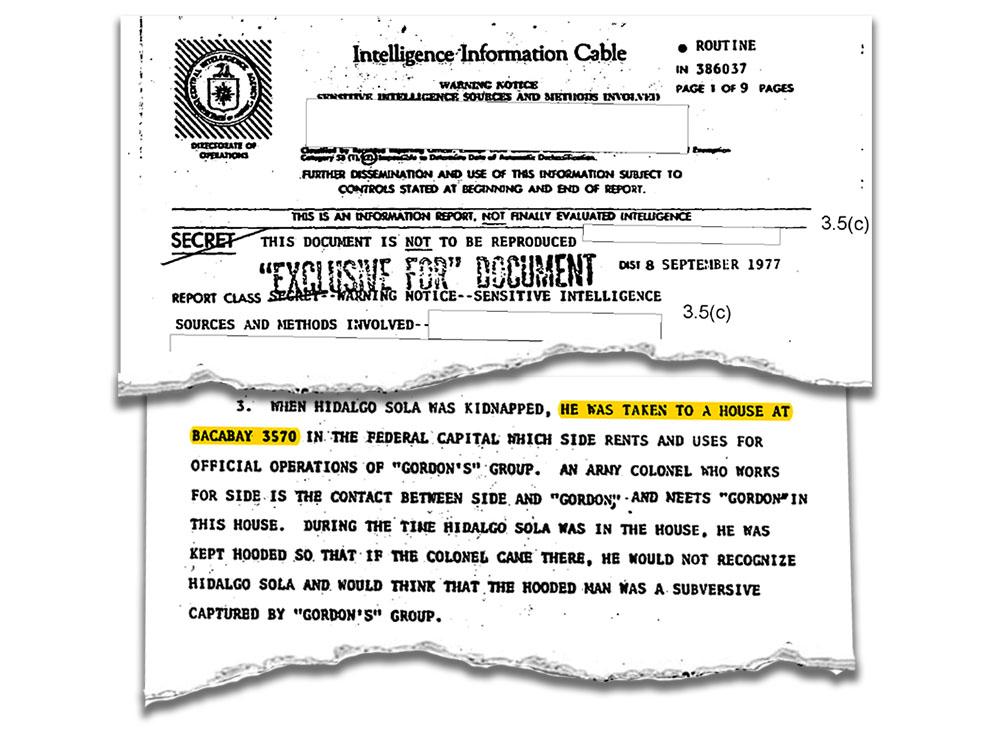 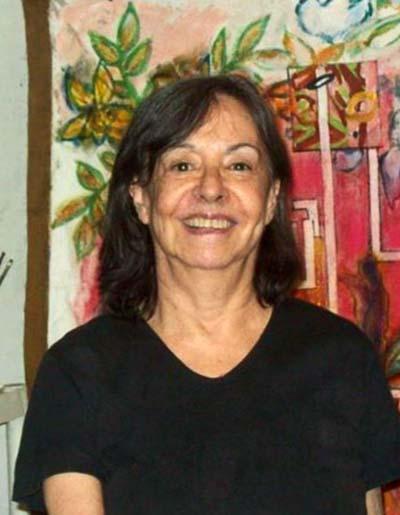 Torture survivor Mercedes Naveiro (above) recalled the wooden floors, the split kitchen, and the basement of the clandestine center where she was detained. 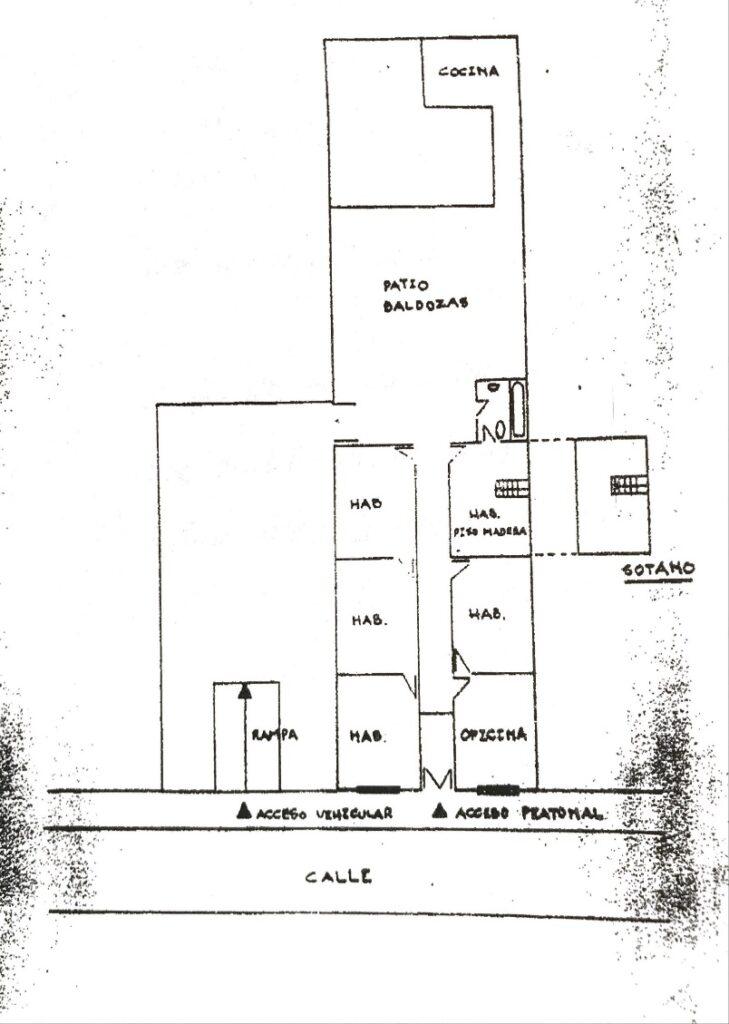 In 1984, survivor Emma Alcira Lebozec outlined a floorplan that corresponds to the house on Bacacay street. 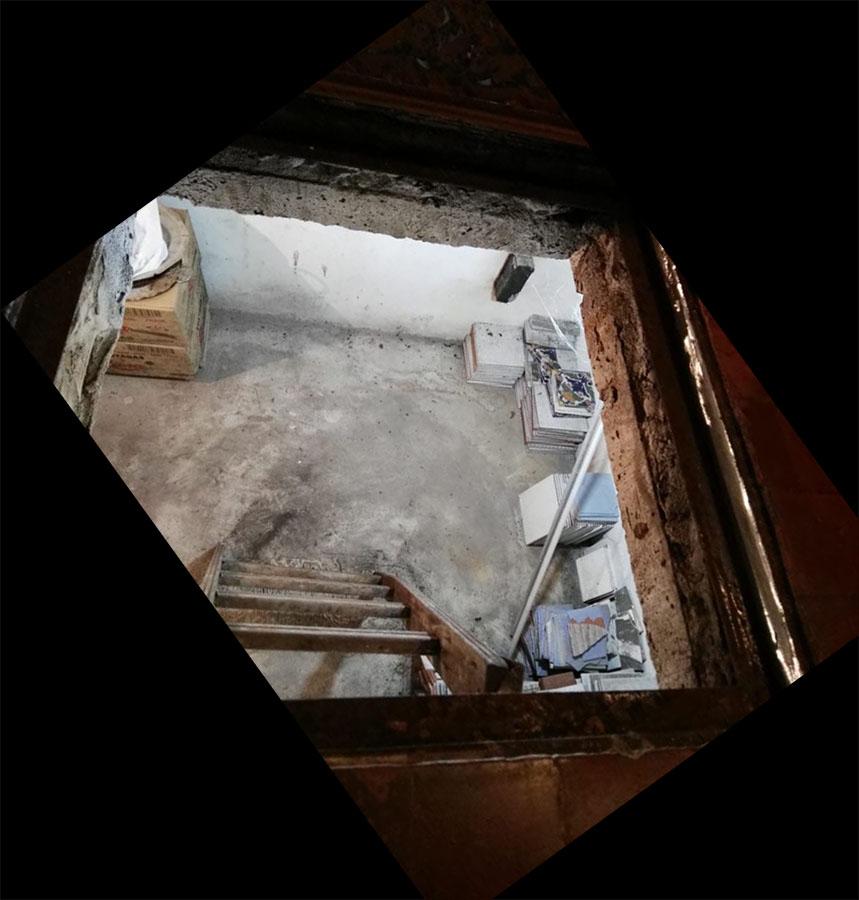 The basement in what today corresponds to Bacacay 3570. (Thanks to Albertina Caron) 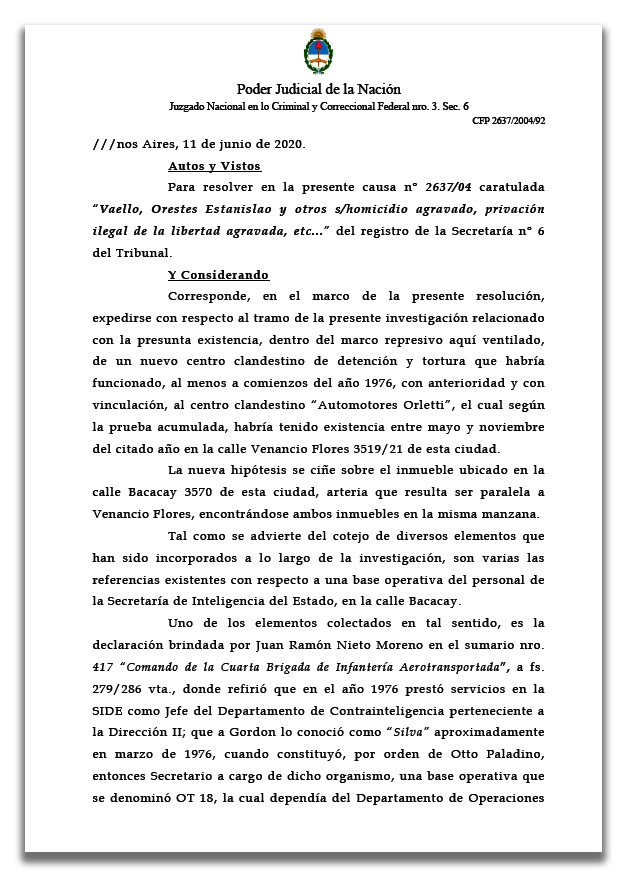 On June 11, 2020, investigative Judge Daniel Rafecas issued a legal report and directive prohibiting remodeling of the property located at 3570 Bacacay street. The residential home needed to be preserved as evidence of repression during the military dictatorship, his directive stated, because “there are several existing clues regarding [the home as] an operational base of the personnel of the State Intelligence Secretariat [SIDE],” which carried out kidnappings and torture, during the years 1976-1977.

In the 28-page legal decision, Judge Rafecas identifies several pieces of evidence: 1) a U.S. declassified CIA intelligence report identifying that address as an operational base of a squad of security forces, 2) previous testimonies by former security officers indicating that a secret detention center existed on that street, and 3) descriptions provided by several surviving victims of torture, among them American citizen Mercedes Naveiro Bender, that coincide with the features of the house.

Washington D.C., July 21, 2020 – Forty-four years after the Argentine military began disappearing thousands of citizens following the March 24, 1976, coup, human rights investigators have located one of the first clandestine torture sites used by state intelligence operatives. The clandestine center was identified after the declassification of thousands of U.S. intelligence records last year, among them a secret CIA report on the disappearance of an Argentine diplomat which stated that he had been kidnapped by agents of the State Intelligence Secretariat (SIDE) and “taken to a house at Bacabay (sic) 3570 in the Federal Capital which SIDE rents and uses for official operations….”

The National Security Archive first called attention to the CIA document, entitled “Kidnapping and Assassination of Argentine Ambassador to Venezuela by a Group Associated with Argentine State Intelligence Secretariat (SIDE) Without SIDE Knowledge or Authorization,” by posting it on the day it was declassified, April 12, 2019. The Archive today reposted the formerly secret CIA cable, along with a State Department report on U.S. citizen Mercedes Naveiro Bender, who was kidnapped in May 1976 and held at the Bacacay house, according to a new investigative report by federal Judge Daniel Rafecas.

In his court filing on June 11, 2020, Judge Rafecas announced the discovery of “a new clandestine detention and torture center that would have been in operation from at least the beginning of the year 1976.”  Located in the residential Floresta neighborhood in Buenos Aires, according to the judge, the house served as “a precursor with ties to the clandestine detention center, Automotores Orletti” –the notorious torture center in the same neighborhood where Argentines, along with other Latin Americans living in Buenos Aires, were secretly held, killed, and disappeared as part of Operation Condor.

During the course of Argentina’s ongoing human rights investigations and trials, several former intelligence officials had referenced an operational center on Bacacay street; and survivors have described the features of the house, including its basement where prisoners were tortured. But until the release of the precise address in the CIA document, according to Albertina Caron, an assistant to Judge Rafecas, the judiciary “lacked sufficient evidence” to identify its location.

“Without the declassification of this document perhaps we would never have been able to identify this clandestine center,” Caron stated. The discovery of the Bacacay facility, she noted, has vindicated victims who had described the house of horrors in testimony over the years. “For dozens of survivors,” Caron said, locating the place where they were tortured after more than four decades “has provided a catharsis.”

One survivor, Mercedes Naveiro Bender, was a U.S. citizen living in Buenos Aires at the time of the military coup. In the middle of the night on May 5, 1976, six secret police operatives seized her at her apartment and transported her to what Naveiro Bender described as “a country home” on the outskirts of Buenos Aires. Her abductors told her they represented a “Nazi-fascist and anti-semitic organization dedicated to combatting subversion [and] leftist elements,” among other threats to Argentine society. She was beaten, interrogated, and threatened, she later reported to U.S. Embassy officials. Her captors accused her of being part of an “international subversion organization” and told her “they did not care if she was American, as she had been kidnapped and no one knew where she was. They were the only ones who would decide whether she would walk out alive or ‘feet first.’”

At least eight other prisoners were in the house, Naveiro Bender reported. “She could hear screams and cries of persons being tortured with electric prods,” according to a confidential State Department report on her ordeal.  During the two days she was detained, Naveiro Bender told the U.S. Embassy, one of her guards informed her that “four people had died.”

One of those killed was likely Raul Horacio Premat, a leftist publicist in Buenos Aires who was disappeared on April 29, 1976. The unredacted State Department cable on Mercedes Naveiro Bender recorded that she had identified Premat, who was a friend of hers, as one of the prisoners and heard “Mr. Premat begging for [a] medical doctor.” Premat remained disappeared until 2009 when his remains, located in a common grave, were identified by the famed Argentine Forensic Anthropology team.

The CIA document and the unredacted Naveiro Bender cable were among almost 6000 U.S. intelligence records released as part of a special U.S. government “Declassification Project for Argentina.” During a visit to Buenos Aires on the 40th anniversary of the military coup, President Barack Obama authorized the declassification. “I believe we have a responsibility to confront the past with honesty and transparency,” Obama stated at Remembrance Park in Buenos Aires on March 24, 2016, paying tribute to the tens of thousands of human rights victims of Argentina’s military dictatorship while pledging to release U.S. intelligence files on atrocities committed during that period.

The Trump Administration completed the review and release of most of the collection; in a special ceremony on April 12, 2019, U.S. officials turned over a set of compact discs containing thousands of pages of CIA, FBI, Defense, and State Department records to the Argentine government.  “The release of these documents stands as a uniquely valuable contribution to the cause of human rights, the cause of justice, and the cause of our fundamental right-to-know,” stated Carlos Osorio, who directs the National Security Archive’s Southern Cone Documentation Project and served as an advisor to the National Security Council’s work on the special Argentina declassification.

The Bacacay address in the CIA document — misspelled as “Bacabay” — was brought to the attention of Judge Rafecas by Jean Marc De Wandelaer, a legal investigator in the Truth and Justice Program of the Ministry of Justice and Human Rights.  In addition to the address, CIA sources identified Anibal Gordon — aka “Silva” — as the SIDE operative who ran the detention center. A notorious leader of secret police death squads, Gordon also played a leading role in the operations of Automotores Orletti. After the return of civilian rule, he was arrested and convicted of committing death squad murders. He died in prison in September 1987.

Since the discovery of the Bacacay house, human rights advocates have stepped up pressure on Argentina’s new president, Alberto Fernandez, to order the declassification of all remaining Argentine intelligence records from the period of dictatorship.  More torture survivors have come forward to provide evidence of atrocities on Bacacay street, Judge Rafecas told the Buenos Aires Herald in Argentina, and human rights investigators are renewing their efforts to locate other previously unidentified facilities of repression. "We are very satisfied with this achievement,” Judge Rafecas stated. “Another clandestine detention center has been identified and added to the long list of sites that operated during the darkest years of our [country’s] history.”

CIA Intelligence Information Cable, “Kidnapping and Assassination of Argentine Ambassador to Venezuela by a Group Associated with Argentine State Intelligence Secretariat (SIDE) Without SIDE Knowledge or Authorization,” Secret/"Exclusive for" Document, September 8, 1977.
Source

Based on unidentified sources in Argentina, this CIA intelligence cable indicates that agents of the State Intelligence Secretariat (SIDE) were responsible for kidnapping, torturing, murdering, and disappearing Argentina’s own ambassador to Venezuela, Hector Hidalgo Sola, in July 1977. The SIDE team was led by “Anibal Gordon” but also included the son-in-law of former SIDE Director, Otto Paladino, according to CIA sources. Misspelling the street name Bacacay, the cable reports that “When Hidalgo Sola was kidnapped, he was taken to a house at Bacabay 3570 in the federal capital which SIDE rents and uses for official operations of Gordon's group.”

This cable, released in full in April 2017, was part of the re-review of records withheld in full during the Department of State 2002 declassification. It summarizes the harrowing experience of U.S. citizen Mercedes Naveiro Bender to U.S. Embassy officials after being abducted, detained, and interrogated in a secret Buenos Aires detention center between May 5-7, 1976. In the middle of the night, she was taken to an undisclosed location where her “abductors had beaten her, and marks and bruises were evident.” She was “blindfolded most of the time and handcuffed and threatened repeatedly with torture and death.”

While blindfolded, “Mrs. Bender said she heard voices of about eight different persons, some apparently as young as 16 or 17, being beaten, kicked and otherwise tortured. She identified voices of her Argentine acquaintances Raul Premat and his wife. She could hear screams and cries of persons being tortured with electric prods. She heard Mrs. Premat in delirium after such torture and Mr. Premat begging for [a] medical doctor. Mrs. Bender believes Premat may be dead now and stated that guard told her that four people had died in two days she was detained.” (Note: Raul Premat was disappeared for 33 years before his remains were located and identified; his wife, however, was never at the Bacacay house, and Naveiro Bender appears to have mistaken another female prisoner whose voice she heard for Mrs. Premat.)

In 2010, Mercedes Naveiro made an artistic rendition of her ordeal in two videos: part 1 and part 2. In those video testimonials, she described seeing Raul Premat. She also described the place where she was held as “an old, large, pillared house with a wooden floor, except for the kitchen, which was modern, divided into 2 parts, with a ceramic tile floor and a basement." Her description matches the house at Bacacay 3570.