Foreign Ministry official Elena Holmberg and renowned writer Haroldo Conti were among those who disappeared at the hands of security forces during the Argentine dictatorship
Published: May 30, 2019
Briefing Book #673

Before coup, CIA analysts predicted rise of "hardline mentality... to dominate the Army”

‘We know the FBI’s records on the dictatorship are rich in information’
Buenos Aires Times
April 4, 2019

"This is the largest amount of information that the United States has ever transferred to another country”
President Mauricio Macri’s Twitter account
March 24, 2019

“On April 12, I will receive, in the National Archives building of Washington DC, the largest delivery of declassified documents related to the last civic-military dictatorship.”
Minister of Justice and Human Rights Germán Garavano ’s Twitter account
March 24, 2019

Washington D.C., May 30, 2019 – On August 20, 1976, Argentine security personnel dynamited the bodies of thirty people – ten women and twenty men – who had been detained by the Federal Police and executed in the town of Pilar, north of Buenos Aires. The explosion scattered human remains over a wide radius. This gruesome display of repression was intended to send a bloody message to other alleged militants to cease their activities five months after the military coup, according to a CIA intelligence report posted today by the National Security Archive. But military junta leader General Rafael Videla was “annoyed that the bodies were left so prominently displayed,” sources told the CIA, because it “reflects adversely on the good name of Argentina."

Not that Videla opposed the mass murders, noted the CIA. “Videla is in agreement that subversives should be killed, but [believes] that the entire matter should be dealt with discreetly.”

For the duration of the “dirty war” during the 1976-1983 military dictatorship, Argentine officials took extensive steps to hide their atrocities through the use of secret torture centers, disappeared victims, and faked battles with insurgents to cover up human rights crimes. Ceaseless efforts by the families of their victims, human rights organizations, courageous prosecutors and judges and survivors of the abuses have lifted the veil on the scale of repression and institutionalized brutality of the Argentine military.

Now, recently declassified U.S. intelligence reports provide comprehensive new information on the killing machine run by Argentina’s security forces during the military era. Officials from the CIA, FBI, and other U.S. government agencies recorded vivid details of the “extensive use of torture” by Argentina’s military regime to quell the leftist insurgency during the 1976-1983 dictatorship, according to a posting today of now-declassified U.S. intelligence materials by the National Security Archive. The recently released records describe “brutal methods employed by the military” during the period. "While numerous innocent people were tortured and killed by paramilitary units, most of the victims were at least supporters of the ERP or the Montoneros,” the CIA reported.

“We continue to receive numerous highly credible reports that torture is used routinely in the interrogation of detainees,” noted a graphic 1979 summary to the Secretary of State from Assistant Secretary of State for Human Rights, Patricia Derian. “The electric ‘picana,’ something like a supercharged cattle prod, is still apparently a favorite tool, as is the ‘submarine’ treatment (immersion of the head in a tub of water, urine, excrement, blood, or a combination of these),” Derian reported. “There is no longer any doubt that Argentina has the worst human rights record in South America.”

The documents posted today are a small selection from a special “Argentina Declassification Project” authorized by President Barack Obama in connection with the 40th anniversary of the military coup in 2016, and completed by the Trump administration in April 2019. A final, historic transfer of 7,500 CIA, FBI, DOD, NSC, and State Department records to the Argentine government took place on April 12, 2019.

“These documents provide a riveting account of the Argentine military’s killing machine and its campaign to kidnap, clandestinely detain, torture, kill, and disappear thousands,” said Carlos Osorio, who directs the National Security Archive’s Southern Cone Documentation Project, served as an advisor to the government declassification project, and is overseeing the review and analysis of the newly released records. “The documents offer new solid evidence in dozens of human rights cases,” he noted, “and will advance hundreds of new cases where similar methods, units, perpetrators and clandestine centers were involved.”

Among the documents posted today are several FBI records that clarify the fate of Peronist activist Dardo Cabo in 1975 and Montonero leader Roberto Quieto in 1976. Quieto’s “interrogators in SIE [Army Intelligence Service] became enraged when they learned that the subject would be allowed to live and administered what they considered to be a lethal dose of poison…” reads an FBI cable. For his part, “Dardo Cabo, has lost the use of one of his arms as a result of the torture.”

While the large number of extralegal detentions, murders, and attempted cover-ups were often attributed to rogue squads, the documents point to a concerted campaign by the military’s National Intelligence Center (NIC) which collected information on insurgents, leftists and dissidents. The NIC then disseminated this information to police, military, and paramilitary units to carry out targeted operations against groups and individuals. These operations generally involved capturing those identified, subjecting them to brutal interrogation, killing them, and later disposing of their bodies.

Women were particular victims of sexual violence. In her report, Patricia Derian described the inhumane condition of fifty female detainees who had “not been exposed to the sun for so long that their skin color is greenish.” One document described live rats being used as a torture device on women. Pregnant women were tortured and their babies, born in captivity, taken from them. One declassified CIA cable included in this briefing book portrays the capture of an ERP leader and his pregnant wife; while in captivity and prior to disappearing, she gave birth to a boy whose identity was only recovered four decades later by the Abuelas de Plaza de Mayo [the Grandmothers of the Plaza de Mayo].

CIA analytical reports written before the coup predicted the disregard for human rights and the rise of a "hardline mentality" in the military once they took power in March 1976. Intelligence cables reveal that the dictatorship’s machinery of repression continued operations well into 1983, just weeks before the transition to a democratically elected government. 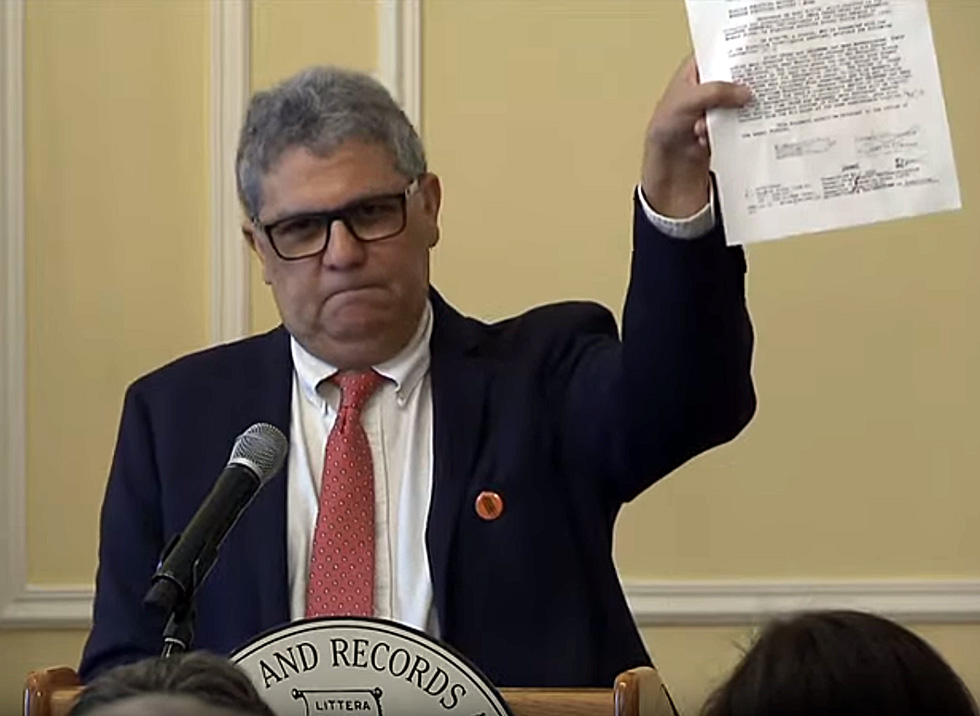 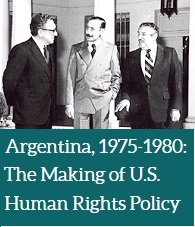 This Digital National Security Archive (DNSA) collection makes available 2,429 selected, previously classified government documents chronicling the development of U.S. policy as it attempted to deal with the tragedy experienced in Argentina during the late 1970s.  This critical, formative period featured a political collapse verging on civil war; a military coup; and tens of thousands of  illegal detentions, torture and kidnappings. 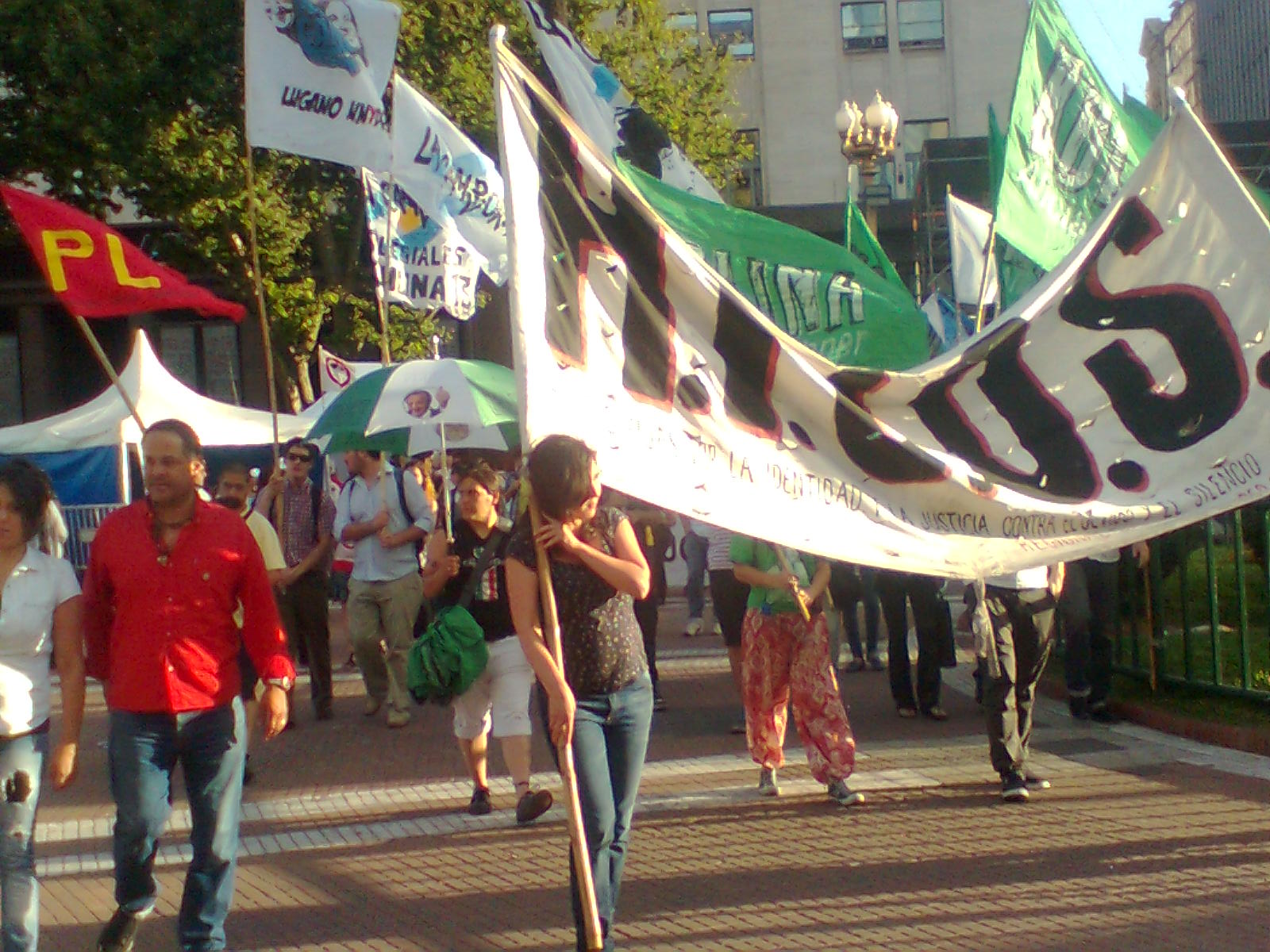 HIJOS, association of children of the disappeared at Plaza de Mayo in 2013. [Shared under creative commons by "Desost"] 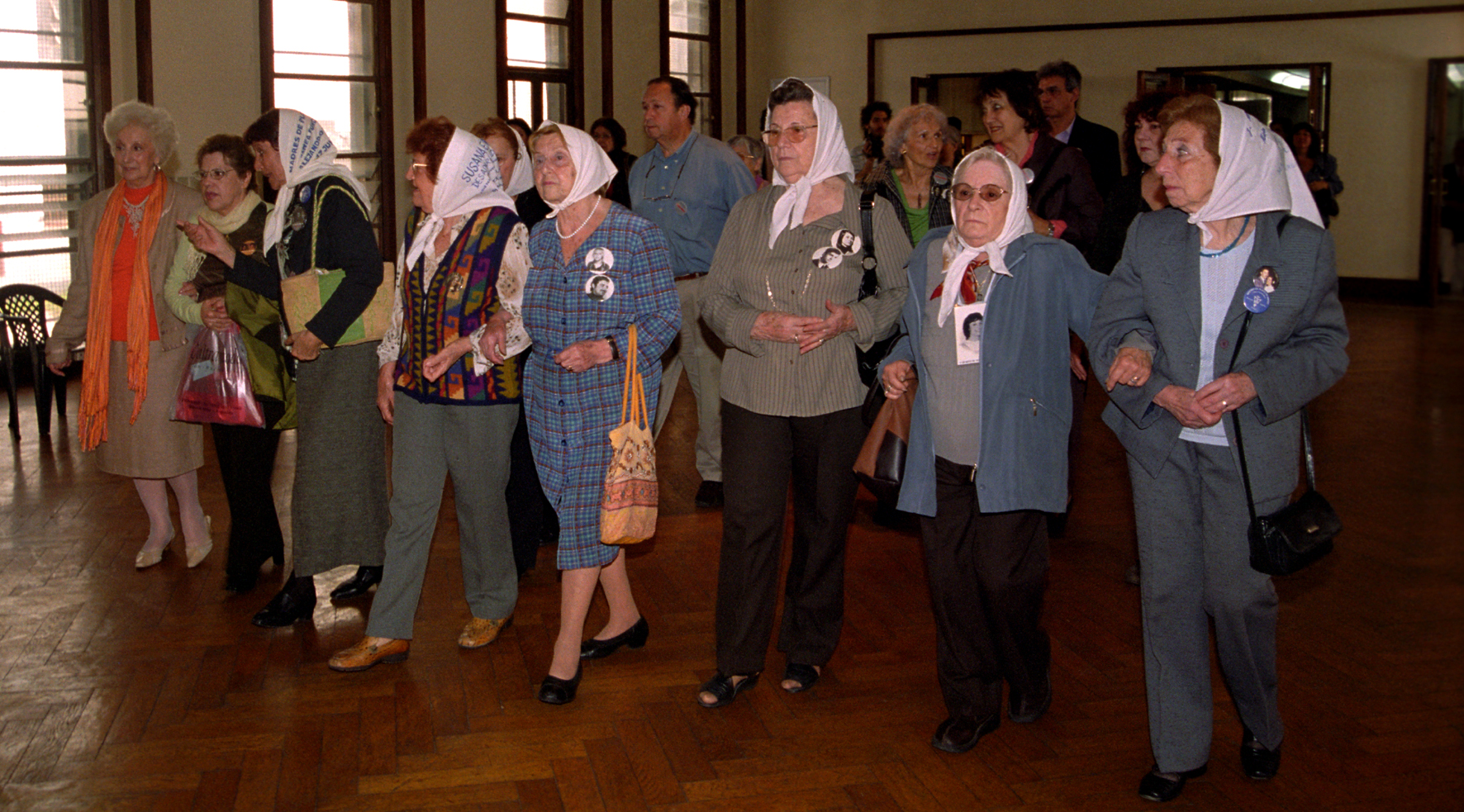 Grandmothers of the Plaza de Mayo. [Shared under creative commons by "Mónica Hasenberg"]

* These documents were identified and described with the help of undergraduate students from the College of William & Mary as part of a research internship led by Professor Silvia Tandeciarz and assisted by Johanna Weech. We would like to acknowledge the following students: Arianna Asfari, Emily Jackson, Pedro Ramos, Isabella Dickens-Bowman, and Johanna Weech (Spring 2018); Lauren Bauer, Grayson Cox, Emily Kate Earls, Brianna Ferebee, Molly Keck, Megan Leu, and Johanna Weech (Spring 2019).